Just before you get to the ludicrous X6 M Competition, you’ll swing past this. And you’ll probably stop and become quite allured. It’s the 2020 BMW X6 M50i. It comes with a powerful V8 engine and plenty of sporty highlights, but with this one you might be able to retain some level of self-control (and your licence). 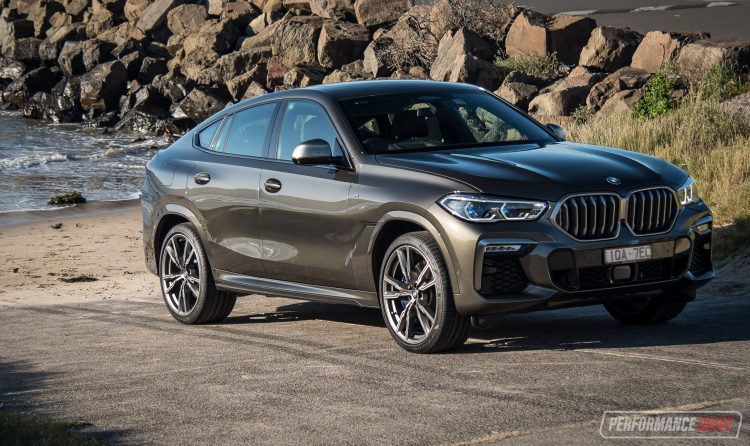 The M50i badge is being introduced for the first time on the X6 with the all-new third-generation model. What’s the X6? It’s the four-door coupe brother to the X5.  The nameplate was originally introduced back in 2007, and at first it did receive a lot of criticism. This was back at a time when SUVs were actually frowned upon – the four-door coupe version seemed even more absurd. Now, as generic SUVs have become so in-demand and popular, the swooping profile is quite compelling as it provides distinction and exclusivity in a sea of conventional wagon-style SUVs.

Like the latest X5 the new X6 jumps onto BMW’s advanced CLAR platform. Benefits include optimised weight, handling, and safety. Performance, in the case of the M50i, is truly heart-racing. Of course, all of this does come at a price. And that price is $159,900 (excluding on-roads). Alternatively there is an M50i Pure variant that starts from $144,900. It misses out on some luxuries. If you really want to go nuts the X6 M Competition starts from $213,900. Also, we should point out the X5 M50i starts from $155,900. 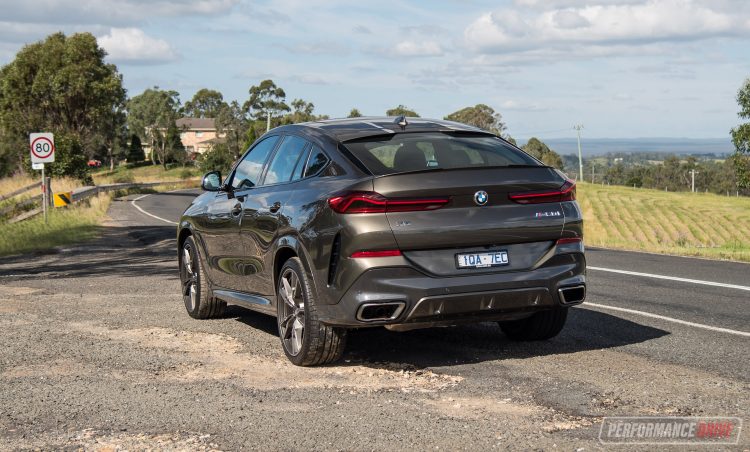 With that new platform BMW engineers and designers have created a larger vehicle overall. Measuring in at 4935mm long, it is 26mm longer than the predecessor. The width is increased by 15mm, to 2004mm, and the wheelbase is stretched 42mm to 2975mm. However, even though the footprint is clearly expanded, the roof height is dropped by 6mm. In other words it is even ‘swoopier’ than before, almost taking the form of one of those chop-top hotrods from the 1950s.

BMW has applied a fresh design language to the new model as well, affixing larger front grilles with active shutters that automatically open and close to aid aero efficiency (thankfully not those full-length items we’re starting to see from BMW), exquisite LED headlights with laserlight technology as standard (Pure version misses out), more defined panel contours and slightly sharper edges than before, and a freshened up rear end with wider and thinner LED taillights, and chunky vertical corner vents. 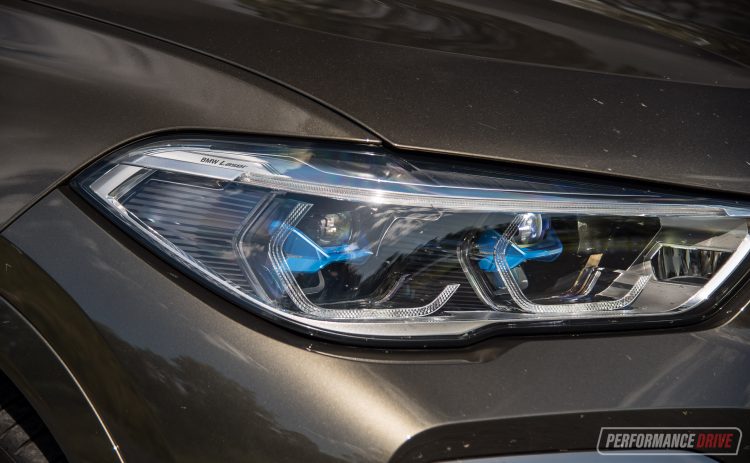 There’s no doubt about it, the new model in M50i trim certainly offers plenty of attitude and presence. Some of the cuts and vents around the body are fake, which is disappointing, but from most angles it looks grandeur and formidable. We like this new Manhattan bronze-green metallic colour, too. It seems to add a dash of class and sophistication to the theme, complimented nicely by the gob-smacking 22-inch M light alloy wheels.

The M50i is developed under BMW’s M Performance division (not to be confused with M division), and so every area of the vehicle has a distinct sporty persona. That includes the interior. This area in particular should attract plenty of buyers. Even buyers intending to purchase an X6 M. Because, unlike the full M model, the M50i has a refined luxury-focused decor as opposed to outright go-fast bits and pieces. 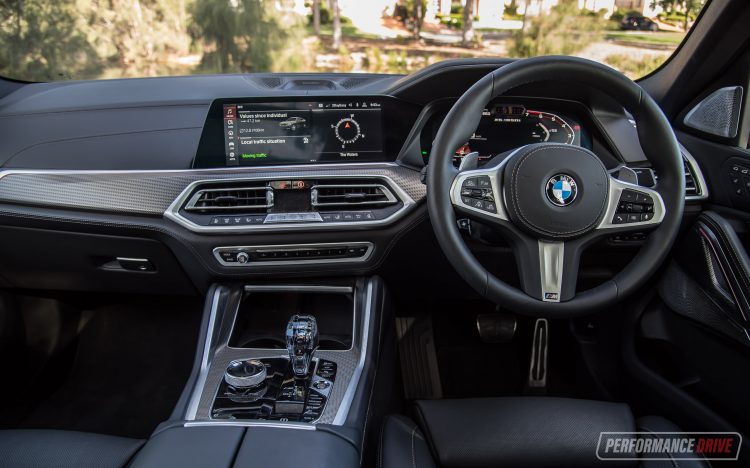 For example, the front seats are described by BMW as sports seats, but they don’t feature massive, pointy side bolsters. And they aren’t wrapped in loud multi-tone leather. Instead, these are supple and shaped more gracefully, offering decent lateral support but not over the top. Adjustments are made easy thanks to clever touch controls; placing your finger on the surface of the button prompts the main media screen to show an illustration of what part of the seat you’re about to adjust.

Comfort is just superb. You could sit in these chairs all day without complaint. Really ensuring this is the optional massage function, part of the $6600 Indulgence package. It includes a CraftedClarity glass gear shifter and iDrive controller, cooled front seats, and heated rear seats. If you’re at this end of the market we think this is an option worth ticking. Why not – treat yourself. 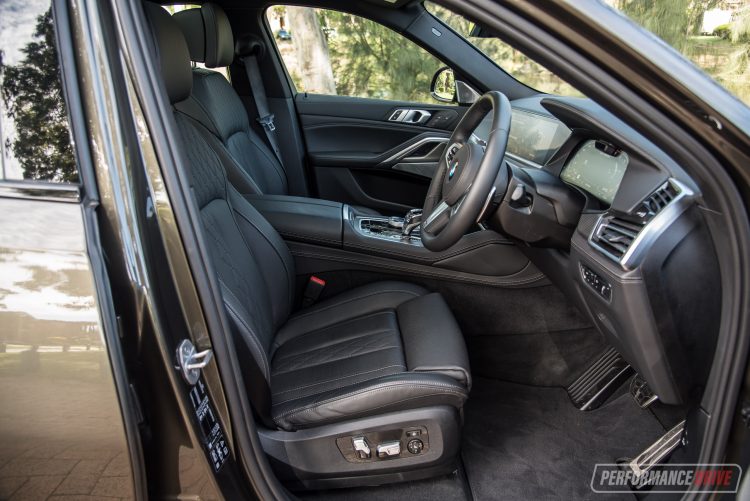 The driving position is typical BMW in that it’s pretty much spot on. An electric steering column means you don’t have to strain a muscle to set yourself up, and the range of seat movement, including height, means it can cater for a wide variety of shapes and sizes. Visibility is also excellent, partly thanks to the comprehensive parking camera system. This is important because, if you hadn’t noticed, this is a massive vehicle. 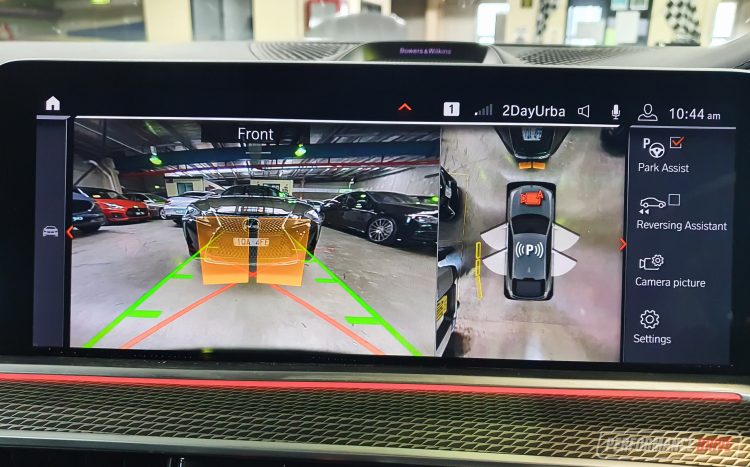 Rear seat accommodation is first class. You have separate climate control, charging ports in the backs of the front seats, and special mounting points for tablets. There’s also BMW’s famously large bottle holders in the doors and two cup holders from the flip-down arm rest. About the only thing missing from the X6 in the back is a drinks fridge. Headroom is marginally impacted by the curvy roof profile, but for adults under six foot it won’t be a concern. In saying that, if you’re after sheer practicality we’d strongly encourage you check out the X5 M50i. 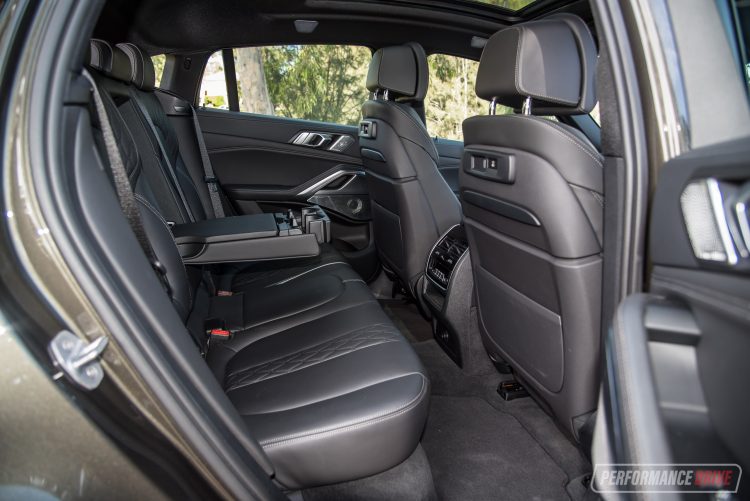 Right up the back the X6 offers 580 litres of boot space. This can be expanded by flipping down the rear seats, flat, via convenient tabs on the boot wall. It’s here you’ll also spot the handy 12V socket. With the seats down the volume grows to 1530L. That’s up from 550L/1525L in the previous model, but down compared with the X5 M50i’s 650L/1870L capacity. 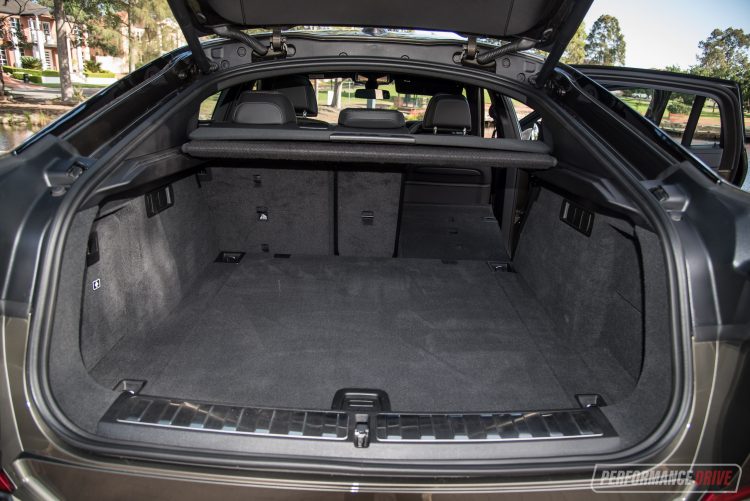 This new M50i is pretty much as quick as the old X6 M. In fact, BMW claimed 0-100km/h in 4.2 seconds with the old X6 M while this offers the sprint in a claimed 4.3 seconds. That’s some good progress. Under the bonnet is a 4.4-litre twin-turbo V8 ‘N63’ engine that utilises a ‘hot V’ exhaust manifold configuration, just like the old X6 M. The turbochargers are mounted in between the cylinder banks. This layout is very popular among high-end manufacturers and even tuners, and is known for offering improved spool-up times, better cooling, while reducing the overall size of the motor.

At 6000rpm the unit develops 390kW. This seems like just the right amount of power for an intermediate performance model. Although, out on the road it actually feels like it has a little more than that. Perhaps more impressive is the torque. Between just 1800rpm and 4600rpm you have a thick 750Nm wall of force at your disposal. Even though this beast weighs in at a hefty 2180kg (tare), all of that torque translates into proper, gut-wrenching acceleration. 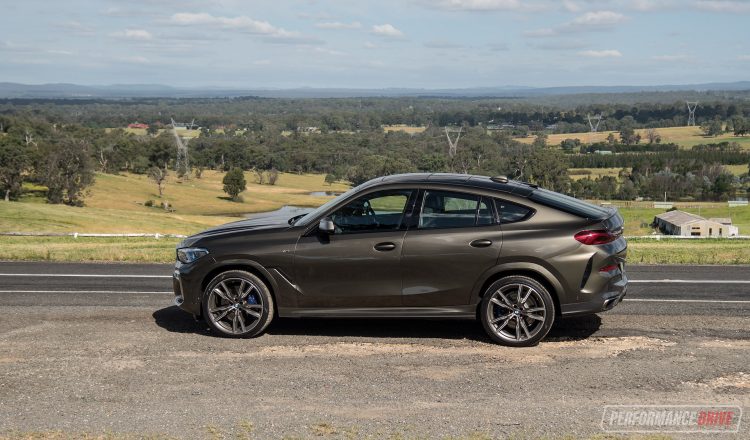 Flatten the throttle, at any speed and in any gear, and the X6 M50i immediately pounces, lurching you back into your seat, hard, hurling towards the horizon. We’re not physicists but moving all of that weight in such a snappy and relentless manner seems like it generates more g-force than some sports cars, including those that are even quicker than this. It is just such a heavy-hitting punch. And BMW is right with its time. We clocked 0-100km/h in 4.29 seconds. We also clocked 0-200km/h in 14.83 seconds, and the quarter mile in an impressive 12.46 seconds at 185.1km/h.

As you can probably appreciate, there is no lacking in performance from the powertrain. It really could be regarded as a successor to the X6 M. At least in a straight line. We can’t even imagine what the new X6 M Competition goes like – we’ll see if we can line up a test of that soon. Where the M50i does differ from the M model though is with handling. 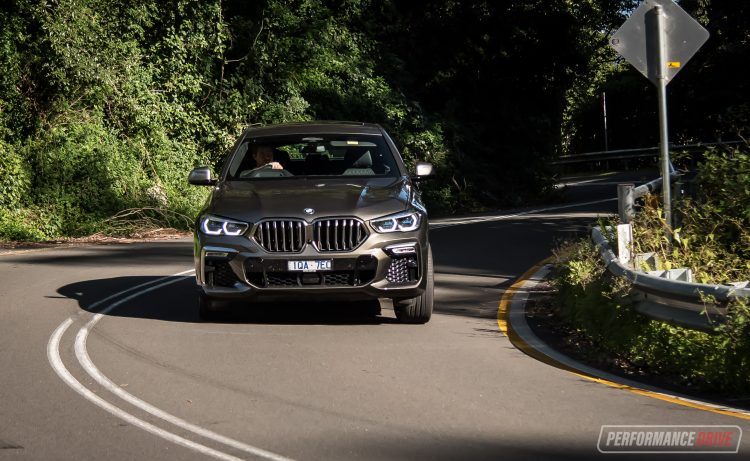 We get the sense the M50i is tuned for comfort primarily, and sportiness when the right driving modes are selected. Pretty much all BMWs drive wonderfully. And the X6 is no exception. It feels very solid on the road, and extremely stable around long sweeping bends, even at very high speed. Last-minute direction changes are a tall order for large SUVs, but in the X6 it reacts and behaves like a much smaller and lighter vehicle. We don’t know how BMW engineers do it.

This is the first time the X6 is being offered with rear-wheel steering (called Integral Active Steering in BMW language). It’s also one of only a handful of SUVs currently on the market with such technology. Essentially it means the turning circle is tighter during low speeds, helping to provide an agile and responsive feel. But then during higher speeds (above 60km/h) the rear wheels turn in the same direction as the front, virtually lengthening the wheelbase and enhancing stability. You can feel it working. It glides effortlessly around bends and manoeuvres well in smallish car parks. 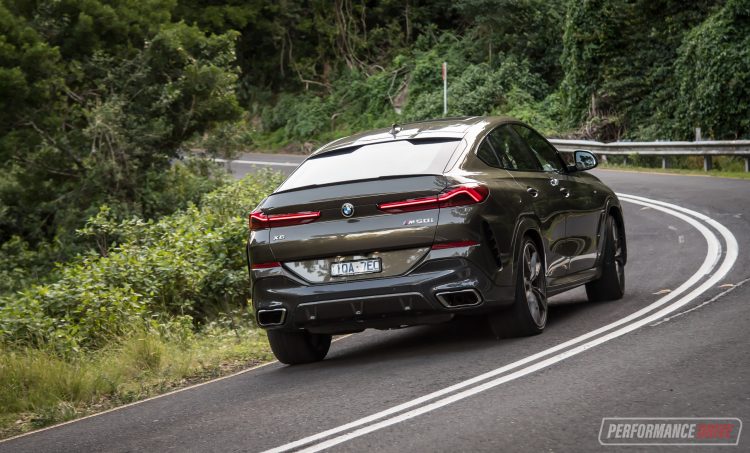 Obviously, there are limits. After a number of fairly serious runs up and down our usual mountain test route the brakes were a little smokey. The brake pedal lost some of its feel as well. And even though BMW has done extremely well to try and hide the sheer weight, under certain circumstances, such as tackling long but tight bends and hairpins, the X6 M50i isn’t as pin-sharp as an equivalent 5 Series or 8 Series. There is some push-understeer. However, we’re talking about putting the vehicle into a situation that hardly any owner is likely to encounter. In that regard though, the X6 M Competition would no doubt be better suited to track days and whatnot. If that’s your thing. But that’ll likely bring some compromises, such as a firmer ride.

Another area where the M50i could potentially steal away X6 M customers is with economy. Yes, it is powered by a spine-tingling twin-turbo V8, but compared with the X6 M Competition, the economy and range are worth considering. The M50i is rated at 11.5L/100km on the combined cycle, while the X6 M is rated a 12.5L/100km. They both feature an 83-litre fuel tank, but that means the theoretical range is 722km in the M50i, compared with 664km in the full-bodied M model. We understand most consumers at this end of the market probably won’t be worried about fuel costs (or any costs), but this does mean the M50i offers superior grand touring capability.

Overall, the M50i strikes the perfect balance between luxury and performance in our opinion. And that’s the general character this vehicle offers. It’s extremely quick when you want it to be, yet it’ll purr and glide around town like a dignified and sophisticated prestige machine.

Any sacrifices that you might have to make are associated only with the hardcore end of the performance spectrum; it isn’t quite as fast and it isn’t quite as flashy as the flagship X6 M. There are no compromises in refinement or comfort though. Actually, that’s a bit of a lie. The rear seat and boot area are a compromise on all X6 models. So on that note we’d go for the almost identical but more affordable and more practical X5 M50i. 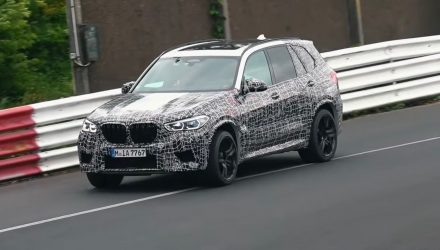 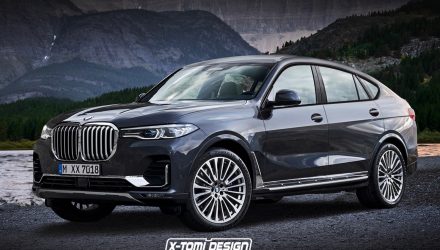 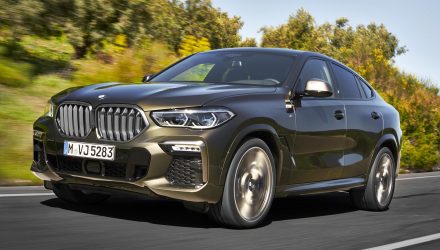 Great to get outdoors in the new BMW X6 M50i. Rev

Surely THE coolest mid-size SUV on the market? 405