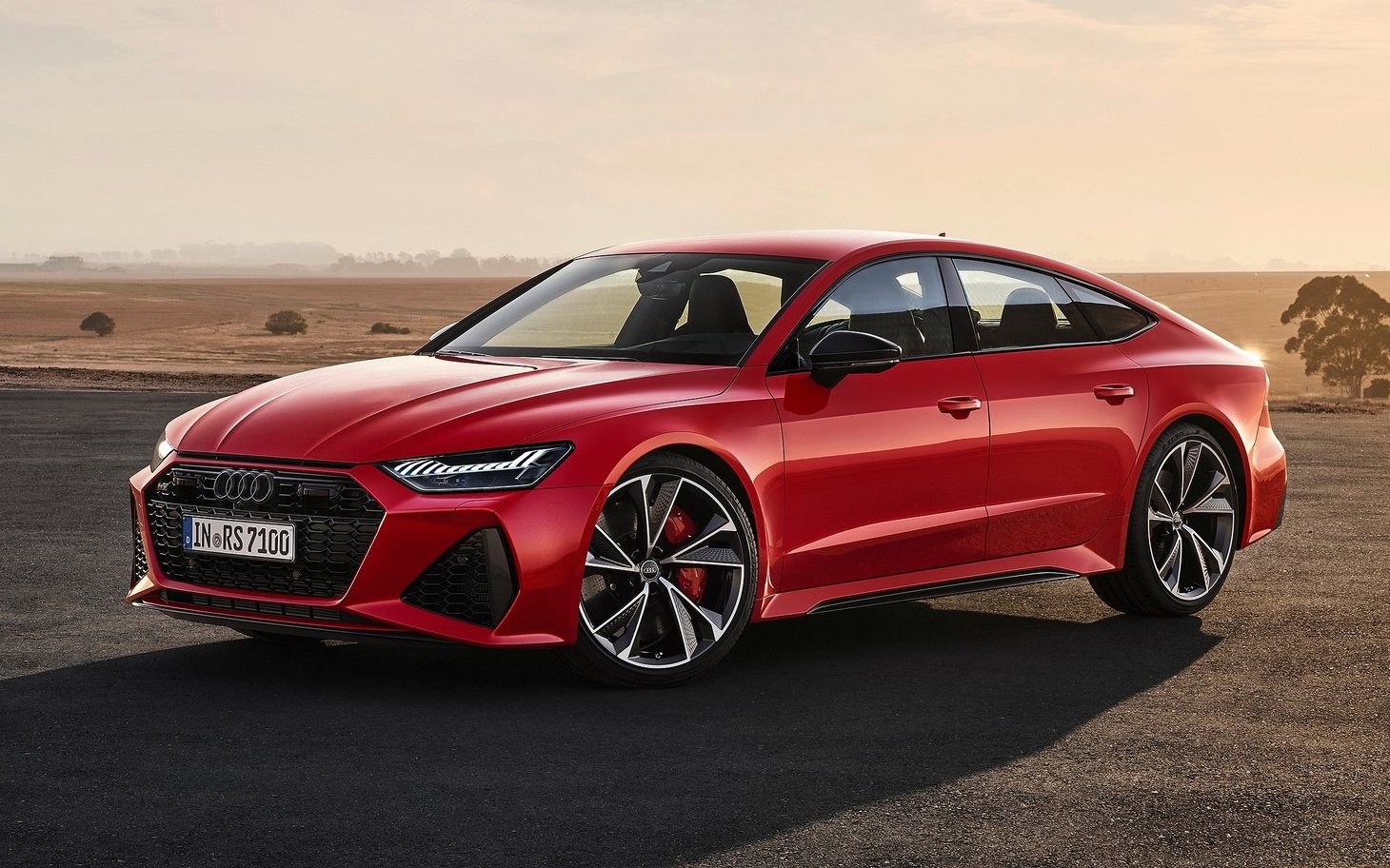 Audi has revealed the 2020 Audi RS 7 Sportback at the Frankfurt motor show, as previewed earlier in the week. It’s one of the first of many debuts as the mega car show gets underway today. 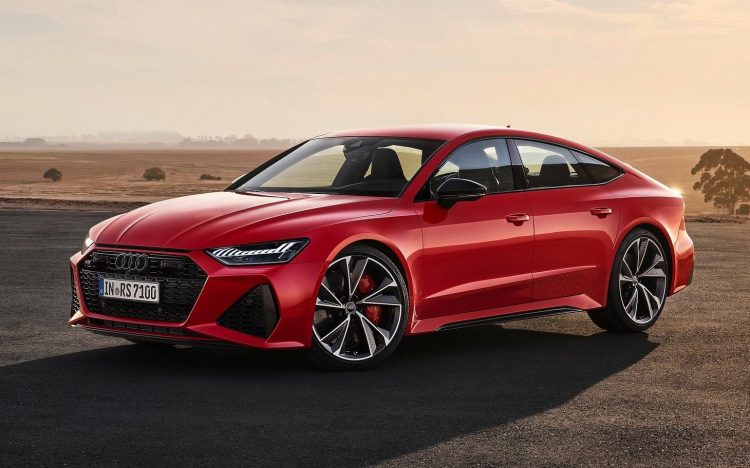 The 2020 Audi RS 7 Sportback is based on the latest A7 Sportback, underpinned by the VW Group MLB Evo platform. It sits at the top of the company’s four-door coupe family tree, measuring a grandeur 5009mm long. Thanks to pumped wheel arches as part of the RS treatment, the new model is 40mm wider at the front than the regular A7.

Under the bonnet, the new RS 7 is powered by the latest 4.0-litre twin-turbo V8 monster, also seen in the recently-revealed RS 4 Avant. Here it produces 441kW and 800Nm, which is sent through an eight-speed automatic transmission and into an all-wheel drive system.

Out on the tarmac the new beast can conquer 0-100km/h in just 3.6 seconds, while the top speed is electronically limited to 250km/h. However, an optional Dynamic package unleashes a top speed of 280km/h, or up to 305km/h with the Dynamic Plus pack. 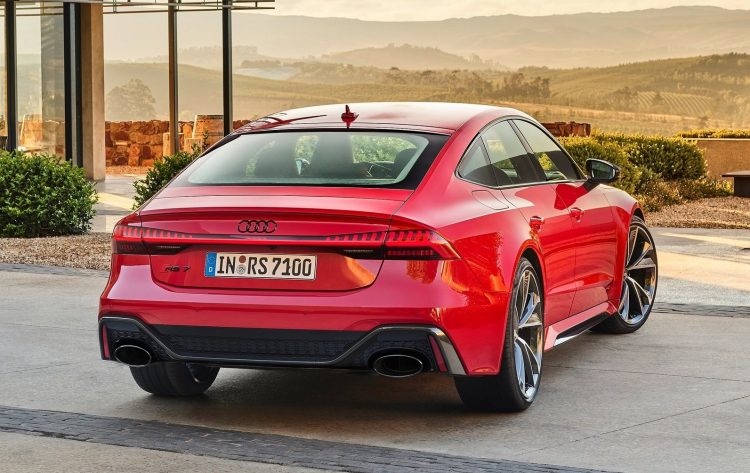 Like many of Audi’s latest models, the new RS 7 uses a 48-volt electric system and offers mild-hybrid capability. The belt alternator starter can recover up to 12kW of power, which is fed into a lithium-ion battery. During stop-start driving the electric system can help propel the car at speeds below 22km/h. The company says this tech helps to cut fuel consumption by up to 0.8L/100km.

As for the design, it is spectacular. At the front is a wide-open grille in fashionable black, with black triangular side intake clusters, and new-look LED headlights up above. You’ll notice the bolstered wheel arches, especially at the front, with a neat side skirt highlight in black and the traditional RS grey side mirrors. Around at the back is a tidy diffuser element in black, with twin exhaust outlets switching from the usual quad-outlet style.

To help with handling the 2020 RS 7 comes as standard with adaptive air suspension with various settings for the driver, while the ride height is lowered by 20mm over the regular A7. Buyers can also option for Dynamic Ride Control for even tighter handling.

A set of 21-inch aluminium wheels come as standard, in a 10-spoke design, wrapped in 275/35 tyres. These hide eye-popping 420mm front and 370mm rear brakes, or optional 440mm front and 370mm ceramic items, with either grey, red, or blue calipers. 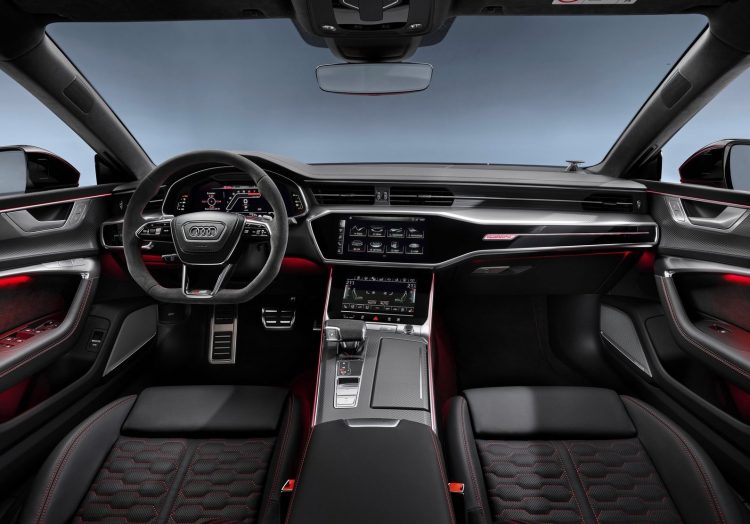 Inside is the latest MMI interface with twin touch-screens on the dash and down to the centre console. There’s also a fully digital and adjustable instrument cluster. Passengers are cosseted in special RS sports seats covered in Valcona leather, with honeycomb stitching, with fine materials used for the trimmings throughout. Speaking about the car, Oliver Hoffmann, managing director of Audi Sport GmbH, said:

“The RS 7 Sportback is our interpretation of a five-door high-performance coupé with a grand tourer design. With refinements to make it even more suitable for everyday use plus its incredible performance, what we have here is an outstanding piece of sports equipment for customers who like their cars to feature stunning design.”

The new model will go on sale in Europe at the end of 2019. Australian timing and prices are yet to be confirmed, although a local arrival is expected during about the middle of next year.