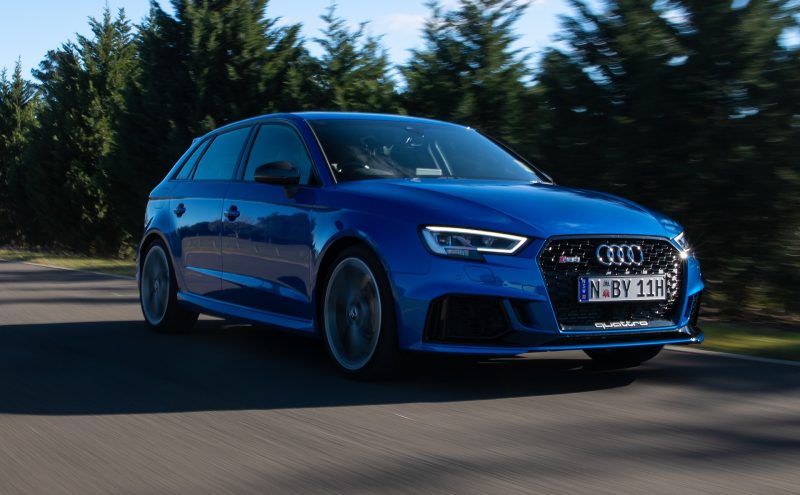 Super hot hatch fans will be excited to hear the 2020 Audi RS 3 Sportback and RS 3 sedan are now available to order in Australia, bringing back that legendary soundtrack and quattro all-wheel drive grip to the market. Yes, that iconic five-cylinder howl is making a comeback after being missing in action for the 2019 model year. The MY2020 continues with a 2.5-litre turbo that produces an insane 294kW and 480Nm, making it one of the most powerful cars in its class.

Across the tarmac Audi claims 0-100km/h can be dispatched in just 4.1 seconds. Despite this almost supercar-like level of performance the premium hot hatch (and sedan) delivers an official average fuel consumption of 8.5L/100km, and emits 195g of CO2 per kilometre (194g for the sedan).

Four main models are now available to order in Australia, including the regular RS 3 Sportback and sedan, and the Carbon Edition versions of each of these. The Carbon Edition packs in special equipment such as bespoke 19-inch wheels, and, of course, carbon fibre highlights such as side mirrors and interior trimmings. All versions come with Audi’s virtual cockpit incorporating a 12.3-inch digital display for the instrument cluster with configurable functions, as well as a 7.0-inch MMI Touch system that’s connected up to a 14-speaker Bang & Olufsen sound system with digital radio.

“The RS 3 has proven its immense popularity consistently throughout this generation, and we’re aware that many enthusiasts have been keenly awaiting its return. We look forward to meeting demand for this special vehicle, once again.”

Buyers can head into their local Audi dealer now and place an order, or order online via Audi’s online platform. Prices start from the following (excluding on-road costs):