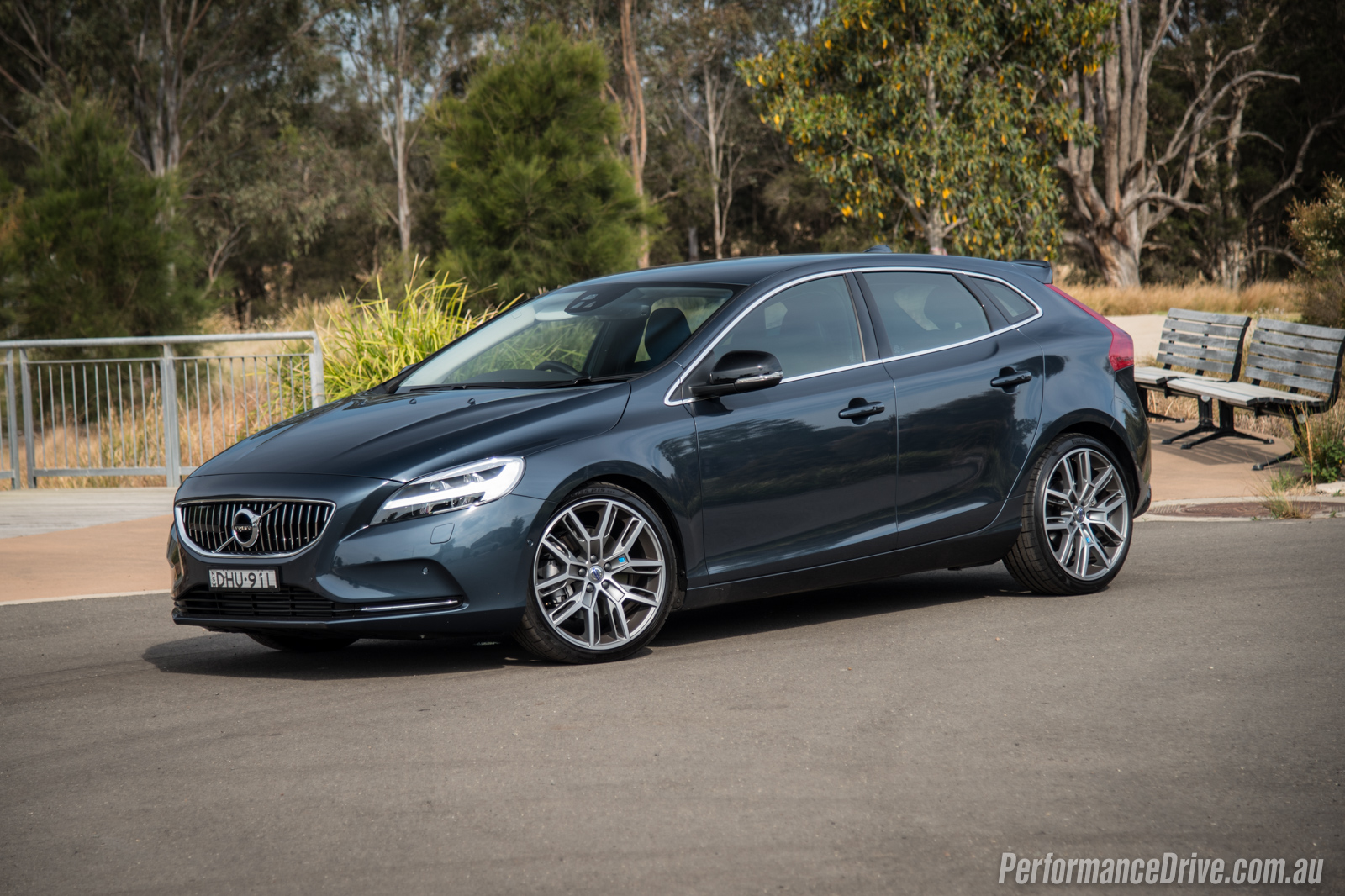 Its revival time for the Scandinavian car maker’s offering in the small luxury hatch segment. First hitting Australian shores in 2013, the mid-life Volvo V40 update has been tweaked with some needed touch ups, and now we are offered an energising Polestar Performance pack option. 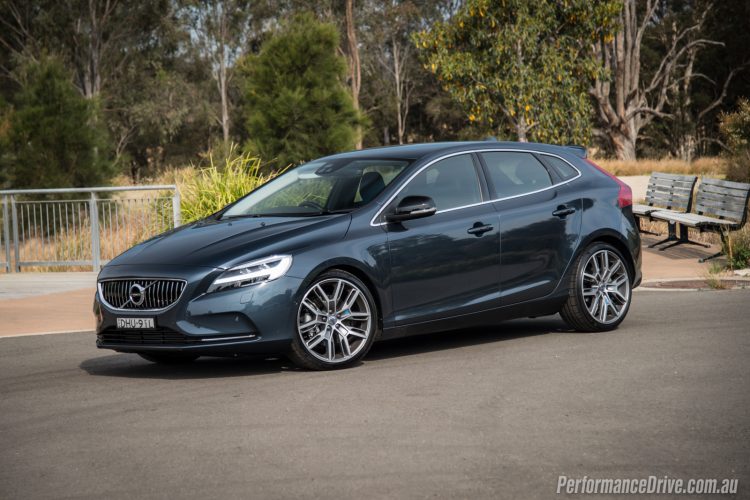 Earlier this year, we saw minor cosmetic changes to the revised front end, with “Thor hammer” headlights and new front grille, eight-speed auto (replacing six), and some engine improvements throughout the range. Further to the update, Volvo hopes to shake that ‘Granddad’s Volvo’ image with the Polestar Performance pack, available on most models. 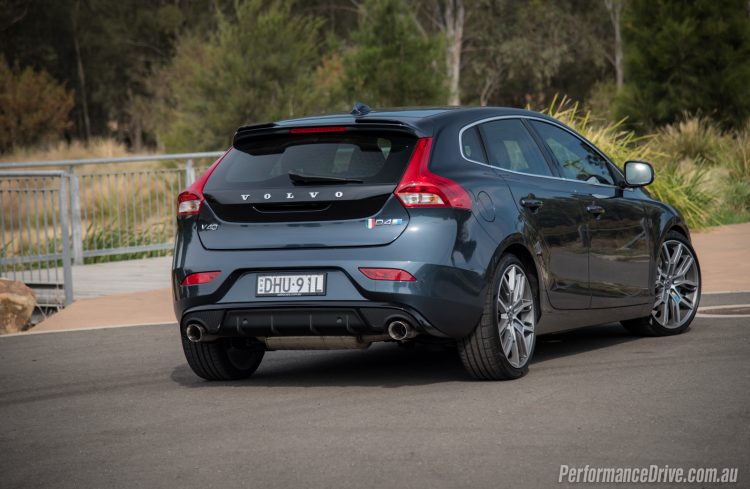 As you would expect from a premium Euro hatch, the Volvo V40 showers you with class leading features. In fact, it deserves more kudos than it receives. Back in 2013, it was the first car to offer a pedestrian airbag that deflates out of the bonnet. It was also the first in the class to offer an all-digital instrument cluster.

Then there was one of the most intuitive adaptive cruise control system available, as well as being one of the first manufacturers to introduce auto emergency braking. This is just to name a few. Most of these features are offered in mainstream brands these days, but being the innovation leaders in the market, you can see the justification for the premium price tag here; such technologies seem more refined and complete in the V40 compared with the cheaper equivalents. 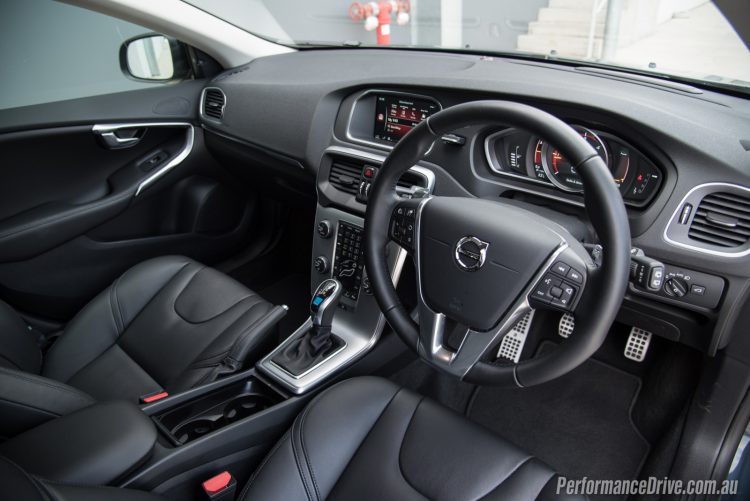 If you opt for the Polestar performance pack you pick up lowered sports suspension, 19-inch wheels with Pirelli P Zero (235/35) tyres, a rear diffuser, unique spoiler extensions, a stainless steel exhaust and sports air filter, black door mirrors, and an increase in engine performance through a software tweak (more on that below). 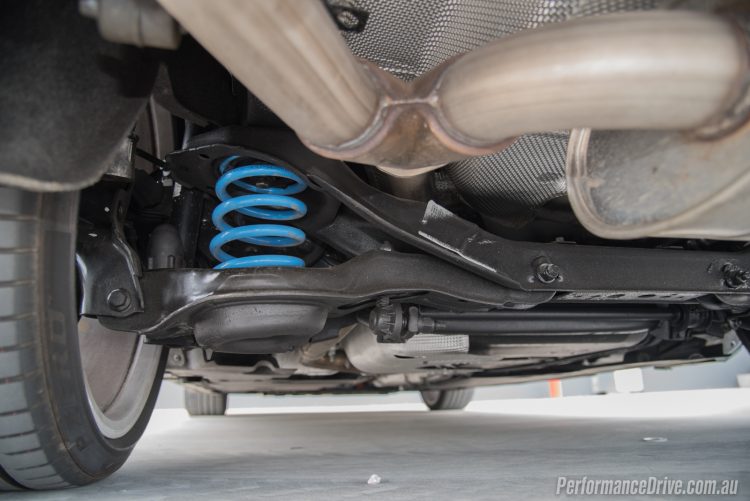 When it comes to the interior, the V40 has always been one of the leaders when it comes to comfort and innovation. Now mid-life, it doesn’t take much to start slipping away to second and third place. The simplicity of the dash layout is still one of the best though. But maybe the air-conditioning controls and radio buttons are starting to look (and function) a little outdated. It’s more of a personal preference, but we like the fact there are no small touch-screens with tiny buttons to navigate through.

Comfort levels are still outstanding for both short trips around town and longer day trips. Leather materials in the Inscription feel durable and soft, and the driver’s seat can be electronically adjusted in a multitude of directions to suit even tall drivers. Long hauls may become a little claustrophobic for adults in the second row, however, it is respectable that you can still fit your feet under the front seats.

At 335 litres, boot space is fairly modest in comparison to other cars in this segment. For example, the Toyota Corolla measures 360 litres. Luckily, if you ever need that extra luggage space, or carry the odd Ikea flat-pack, the back seats lie almost flat with ease. A handy 12V socket is also available. 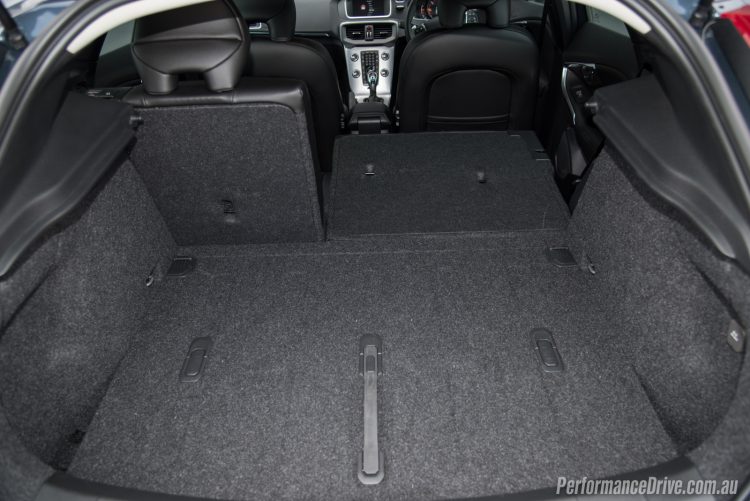 Without the Polestar performance pack the Volvo V40 is in the top percentile for driving manners; a very different story with the pack. We found that the low profile 19-inch wheels and lower suspension make the ride extremely abrupt when going over even small bumps. Potholes send a loud shock throughout the entire car. You feel a notion that Volvo has just slapped on some sporty wheels and springs with zero care about tweaking other components to suit. Even as a sporty variant, there really isn’t an excuse for ride to be this firm and shaken when riding over typical Aussie bitumen.

Also putting down to the Polestar wheels is the increase in road noise compared with non-Polestar models – we found we had to raise our voices just to speak over the road noise. We understand this is a sports version, but we’ve seen other cars walk and chew gum at the same time. The fact this isn’t an outright dedicated sports car, rather a sporty-enhanced car, doesn’t help.

On the plus side, handling with the Polestar pack around corners is quite impressive. The car is able to approach and complete corners at a much higher speed than the regular model, with confidence, which is exactly what the Polestar label is all about. Around corners, it doesn’t give in to any body roll. It stays completely flat, allowing you to accelerate out sooner and with pure composure and grip; albeit with some torque-steer. 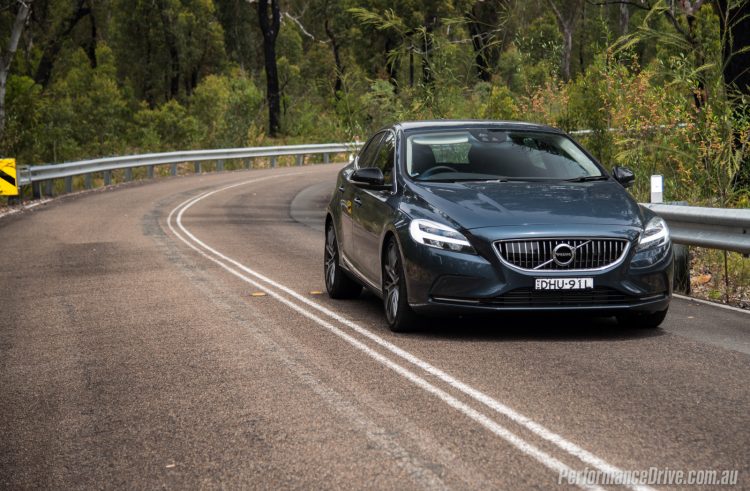 The steering is quite stiff for that sporty feel. It doesn’t have much bounce-back-to-centre spring, which helps to make it feel stable and straight at high speeds. But the steering conveniently adjusts to a lighter feel at low speeds for car parks.

In standard D4 guise the engine outputs a superb 140kW of power and a huge 400Nm of torque through the front wheels. With the Polestar pack, through an engine software tweak, output is increased to 147kW and a mammoth 440Nm. This means you will never feel high and dry when it comes to off-the-mark acceleration and continuous surge. It really shines when going up steep hills and overtaking, holding in top gear with ease. This amount of torque in a car this size makes it feel like it could pull the moon behind it – if only the chassis was more capable of harnessing all that torque.

All this power officially translates to a 0-100km/h time of 7.1 seconds, which is 0.1 second better than without the performance pack. Our testing gave a best time of 6.90 seconds, placing into real hot hatch territory. The stainless steel exhaust and sports air filter amplify the sound of the engine quite a bit too, even at idle. It really gives off a sporty note, for a diesel.

Fuel efficiency in the V40 is claimed to not be affected with the performance pack, maintaining an official combined consumption of 4.5L/100km. Our testing produced a much higher average of 7.1L/100km, but this is still pretty good for the real world. With the 62-litre fuel tank, you can easily achieve 1000km with a single fill.

The distinct blue Polestar labelled brakes feel blissfully strong, and they feel like they could stop the V40 with a truck behind it. We clocked a best 100-0km/h emergency stop in a very impressive 2.82 seconds covering 36.24 metres.

If you’re in the market for a premium European hatch that has all the luxuries and technologies to stay safe, but at the same time, desire a sporty touch, the latest Volvo V40 D4 is well worth a look. However, once you add on the Polestar pack, and other support packs, you will be looking at around $60,000 ($60,472.50 as tested, excluding on-roads). This pushes you close to a range of tempting German options, and admittedly, most of them are more sincere cars for driving enthusiasts.

Although the Performance pack feels like a bit of an afterthought in terms of dynamics, with compromised balance, the higher engine output and sporty note might win you over. We’re normally all for any kind of performance enhancements, but in this case we think the regular V40 D4 on its own has a clearer and more appealing identity.