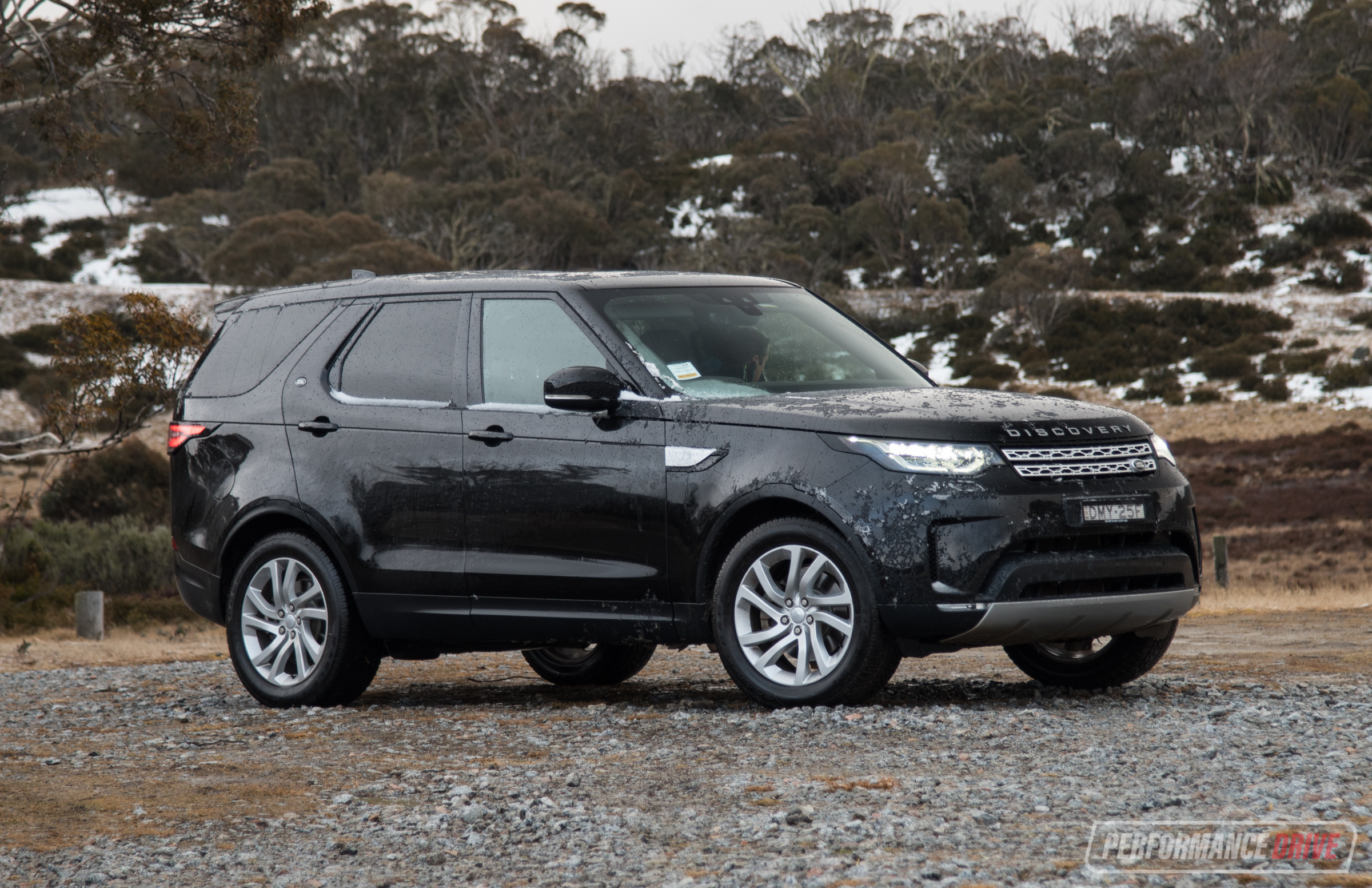 Don’t be afraid of the suave new design, all you traditionalists. This is the 2017 Land Rover Discovery and it promises to be just as – if not more – capable than the Discovery 4 predecessor. Clever technology enhances its on-road capability, while some interesting inclusions to the underpinnings help it when the going gets rough. Prestige levels are also taken to new heights. 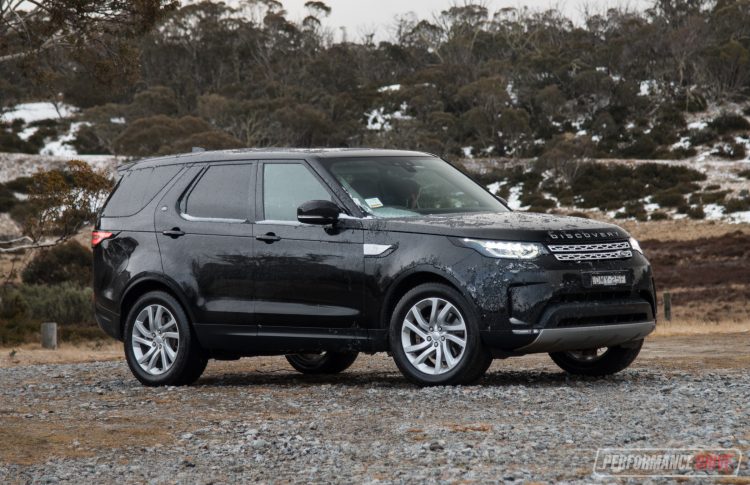 This is the new Discovery ‘5’, recognisable by its interpretation of Range Rover’s latest design language. Yes, it has curves now. And although this might upset some of the standpatters, Land Rover is a much more modern and global brand nowadays. It needs to cater for wider demographics, including those in emerging markets where design and looking good is sometimes more important than functionality and ability.

Not that the new model isn’t able. As you’ll find out, Land Rover has thoroughly gone over the development plan for the new model to ensure it lives up to its extensive heritage, while infusing modern touches along the way.

We’re testing the near-the-top HSE in Sd4 configuration with the new twin-turbo four-cylinder engine. Prices start at $93,550 for this, but kick off from $65,960 for the base model Td4. The new entry-level price is $3400 lower than the old model’s entry variant. However, the previous model used a 155kW/520Nm TDV6 six-cylinder engine in the base model whereas the new Td4 makes do with 132kW/430Nm, if that’s any justification. 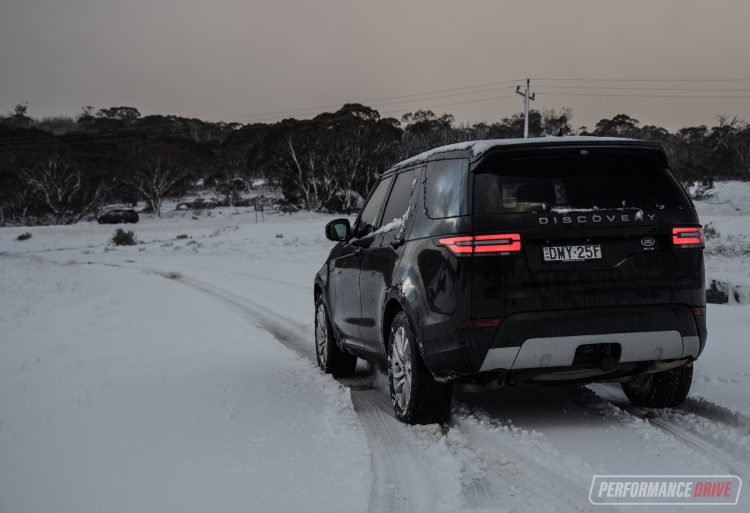 One of the biggest changes is, at least on initial glance, the lack of a stepped roof design providing a large interior with plenty of room in the third row. But if you look closely it does actually step up, following tradition. As a result, Land Rover claims the new Discovery offers “full-size adult seats” for seven. Does it really?

Well, the seat backs in the third row are certainly tall enough to support your entire back, complete with tall headrests. But there is a problem with this; they obstruct your rear vision. Fortunately, the tall third-row seats with tall headrests can be folded down, at the touch of a button we might add (optional). The convenience is definitely there, as the ability to raise and lower the second and third row with electricity makes it much, much easier to configure the cabin, especially if you’re busy carrying a child or got hold of a dog that’s trying to bolt for the hills.

As for the space? There’s heaps of it. The third row can take on board two adults, although we wouldn’t really give them the “full-size adult” accolade, not in terms of Australian or American ‘full-size’ measures anyway. Legroom is half decent thanks to the sliding second row, with a dropped floor providing some room to place your legs. Headroom is great. We have seen more room in some other seven-seat SUVs, such as the Nissan Patrol V8, while the Toyota LandCruiser’s third row is evidently wider. But overall the new Disco’s third row is undoubtedly boastable. 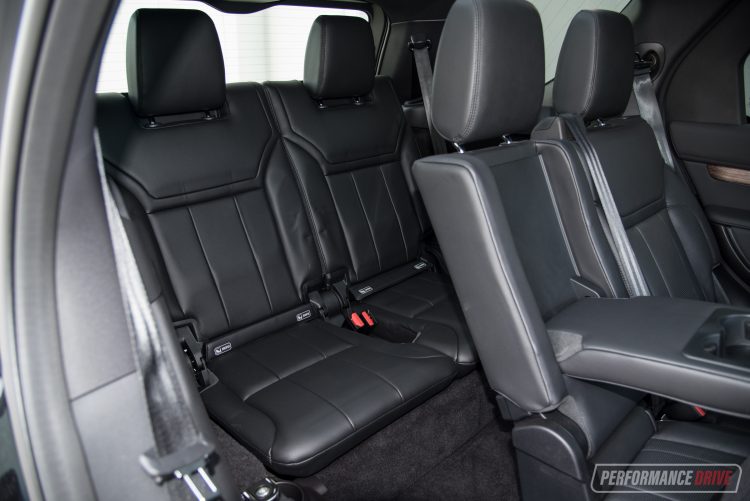 In the second row it’s huge. Lots of legroom and headroom, with separate climate controls on the back of the centre console and vents available, uniquely, in the B-pillar. It’s quite a pleasant ride back here, with a luxury ambience and lots of dark tones giving it a cosy and secure feeling. The electric reclining bench obviously adds to the long-distance cruising comfort.

Up front, this is basically a Range Rover. Is it climbing up to Range Rover standards or is Range Rover stooping down to the Discovery? We think the former. The sense of luxury and general specialness is clear, with a neat centre stack flanked by stainless steel-like trim. There’s also puddle lamps when you get in like in Range Rover models, extended door sills to protect your pants from dirt, and, in this test car’s case, some subtle wood trimmings around the cabin to help bridge the connection between nature and machine. 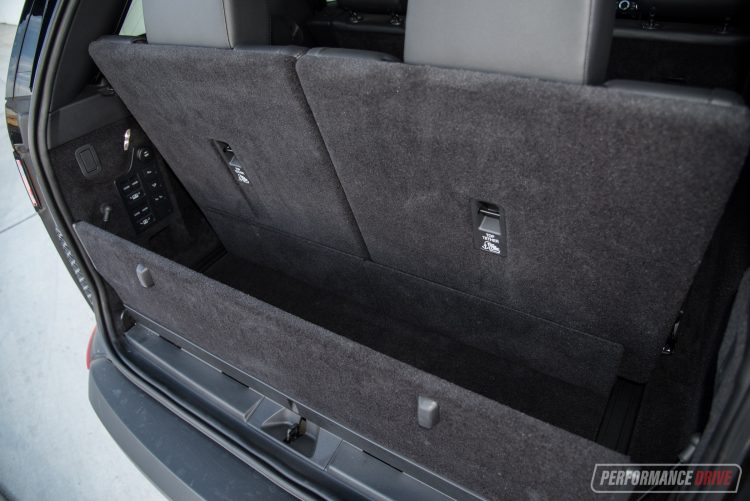 Cargo space is rated at 1231 litres in the standard five-seat layout, or up to 2500 litres with them all folded down. Space is almost non-existent with the third row in place, which doesn’t compare well to rivals like the Volvo XC90. There’s also cubby holes in the third row, pockets in the second row, and a dual-level centre console in the front with a nifty flip-down climate control face that reveals another secret storage cove. Dual glove boxes, countless USB and 12V charging ports (more available as an option), and unique step points for clambering around the cabin make this one hell of a family-friendly SUV.

As standard the Sd4 HSE comes with Jaguar Land Rover’s latest touch-screen media interface with tunes playing through an okay 10-speaker stereo. This is an area where Land Rover could improve in our opinion. The standard stuff is pretty good but there are too many options. For example, digital radio is $920 – a $20,950 Hyundai i30 Active (base model) comes with this as standard. Head-up display ($2370), adaptive cruise ($3290), and that third-row of seats ($3400) are all expensive options that really should be standard we think, and even more so on this upper-spec HSE variant. 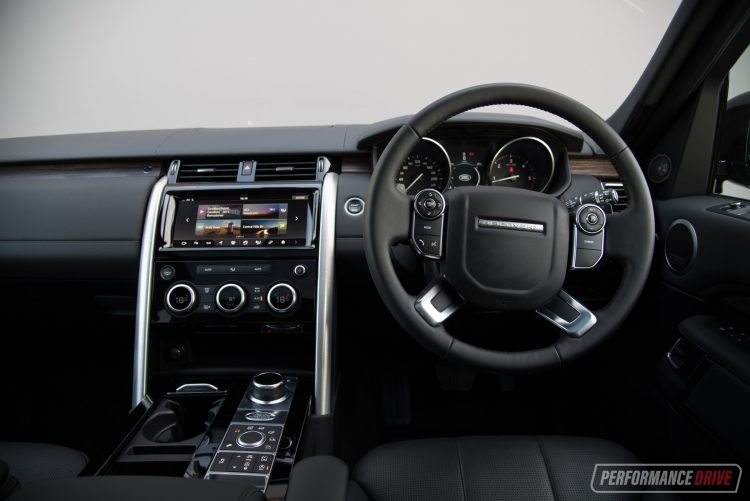 Aside from the new underpinnings borrowed from the Range Rover Sport, helping to shed around 300kg from the SUV’s guts compared with the equivalent predecessor (although now a four-cylinder compared with V6 previously), the latest model brings in a fleet of new Ingenium engine options. And probably the most interesting one of all is this Sd4.

It’s a 2.0-litre twin-turbocharged four-cylinder diesel. Seems a bit small? Well, it kind of is, considering it has to haul around a 2115kg family room. There’s no denying it is a brilliant little engine on its own though. Power peaks at 177kW at 4000rpm, while torque ceilings at a strong 500Nm, spread from 1500 to 2500rpm. This makes it more powerful and almost as torquey as the previous model’s entry 3.0-litre V6. Fuel economy is outstanding for this class of vehicle too. The official average is just 6.4L/100km, and our test floated around the 8L/100km mark.

Out on the road we have to commend this unit for its quietness and smoothness. It is serenely hush for a diesel, probably because it’s tucked away, far away, under that huge empowering bonnet and frontal area. Even at the tailpipe though it is relaxingly mute. In fact, it’s not easy to tell this is actually a diesel when you first come into experience with it. The revs build quickly and freely, like a petrol, and the noise, albeit what exists of it, thrums and buzzes like a petrol.

Now, pushing and pulling the big Discovery, with its constant all-wheel drive system, means it’s not the quickest SUV in the class. It’s in no real rush to get off the line. But once it’s up and running the fantastic eight-speed auto has no trouble making the most of that high torque. We clocked a best 0-100km/h time of 9.04 seconds, which is certainly swifter than any of the four-cylinder Japanese or Korean favourites in the more affordable class, but it’s nothing really to write home about in comparison to mid- to upper-spec German rivals. 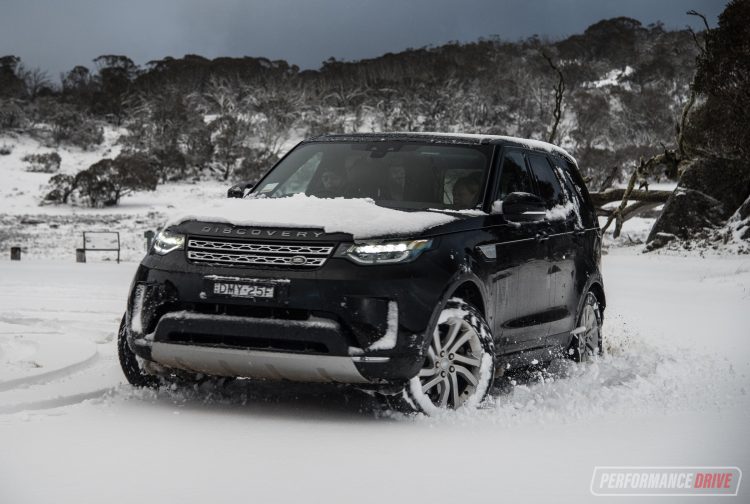 Where this vehicle should spend most of its time is off the road, exploring and discovering the wilderness. As this is where it shines. And to kick a winning goal straight after the start whistle, Land Rover has fit adjustable air suspension to all variants in Australia as standard. This means you can lower and raise the ground clearance at the touch of a button. Gangsta, right?

Ground clearance can be lifted to a class-shattering 283mm, providing a water wading depth of 900mm. With the standard Terrain Response and clever four-wheel drive system it is no doubt one of the best-prepared earth-conquerers in the luxury SUV space. We found the trick drive system to work flawlessly during our test, which included tackling some thick snowy conditions.

For comparison, we brought the latest Ford Ranger Wildtrak along for the trip and it was slowed down by a spinning front wheel in the snow (with the rear diff lock engaged). Whereas, in the Disco, it calculates the best distribution of power with no hesitation in progress. Quite remarkable. We’d love to give it a proper off-road test in the near future to really find its weakest points. For those wanting further off-road readiness you can option for an active electronic rear differential. 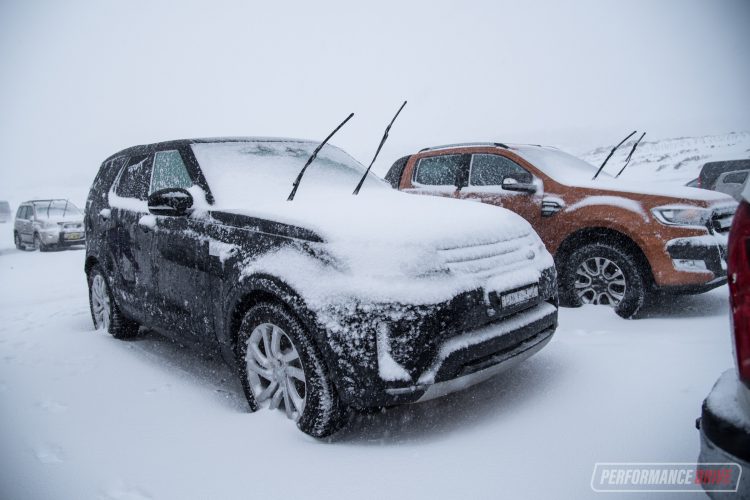 For us, the most attractive drawcard of the new Discovery is its practicality. It really is an awesome transport solution for modern, growing families. We love the expansive cabin and all of the innovative yet luxuriously-garnished nicknacks, and the genuine all-terrain ability, with air suspension adding another dimension of versatility.

Add to all of this a chic and very in-fashion design inspired by one of the most sought-after SUVs on the planet (Range Rover), you’re left with a truly appealing package. About the only elements we don’t like are the daunting options even for this HSE, and the rear end design which can look a bit Chinese-car from some angles. The awkward off-centre number plate doesn’t seem to do any of this much good either.

CONS:
– Too many options that shouldn’t be options on the HSE
– Rear end design looks like a Chinese fake
– Boot space with third-row in place (compared to rivals)
– Sd4 performance okay, Td4 must be underwhelming