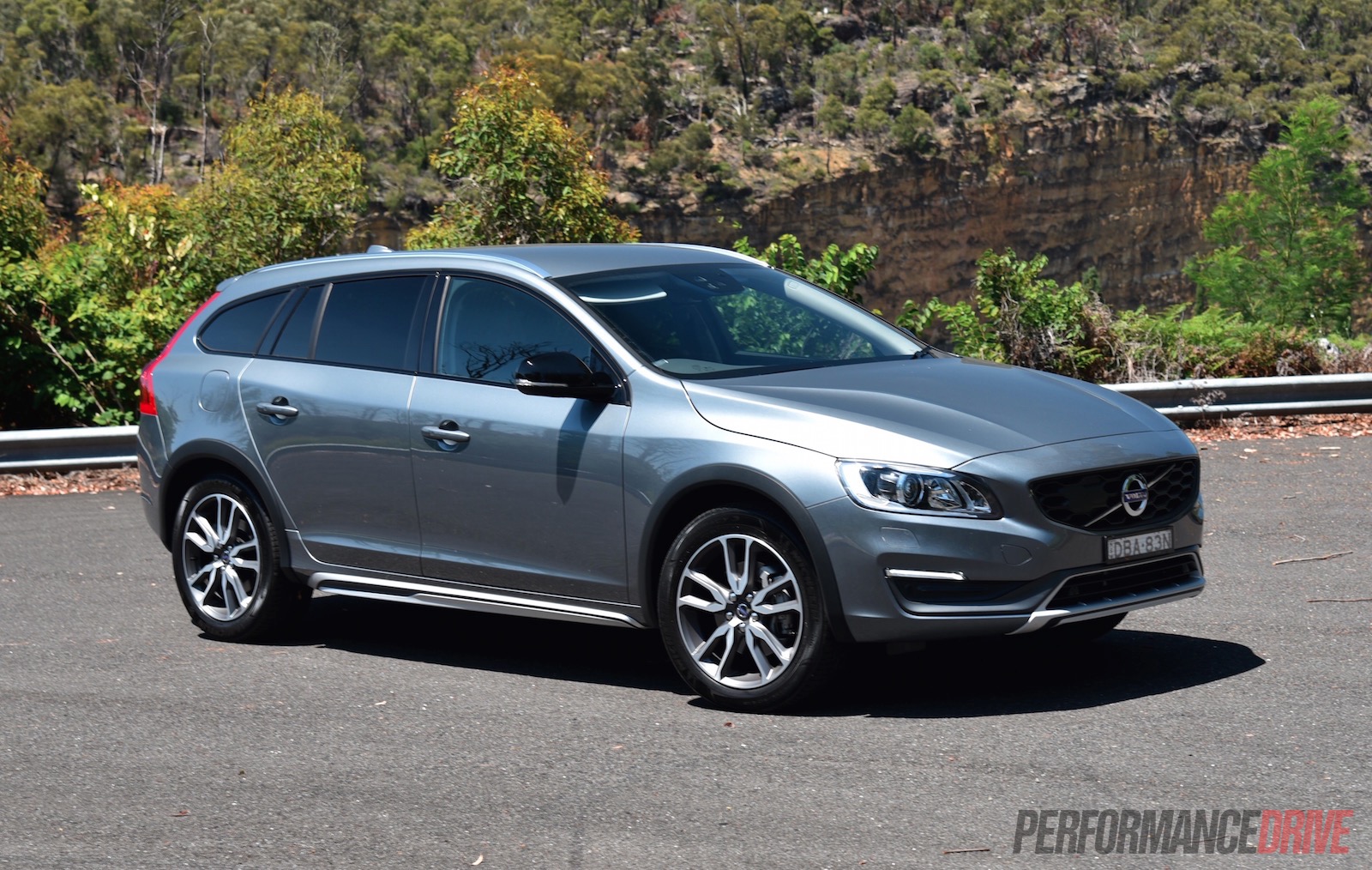 Can’t decide whether you want an SUV or a station wagon? The 2016 Volvo V60 Cross Country D4 is designed to fill in for that precise product description. The potential issue that we can see is, how many buyers are facing such a specific predicament? Consumer trends at the moment suggest the SUV is the way to go. 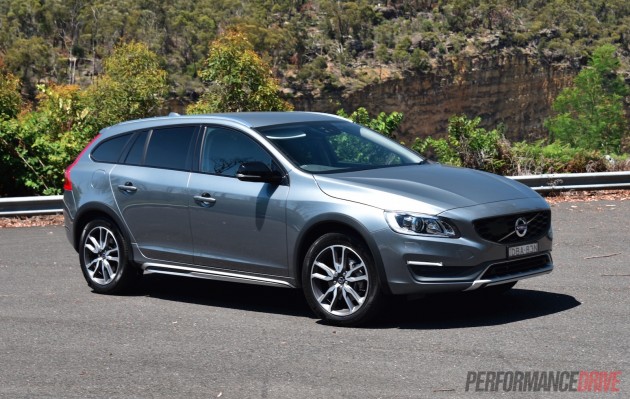 Volvo currently offers the V60, which is a wagon version of the S60 sedan, and it also offers the XC60, which is a proper SUV. All three (including this car) are loosely based on the same, previous-gen Ford Mondeo platform. To make matters more complicated Volvo does offer all-wheel drive with the V60 but only in top-spec turbo-petrol form, while all XC60s are all-wheel drive. Out of these three, only the XC60 D4 is offered with the older ‘low pressure’ twin-turbo five-cylinder diesel engine as featured in this Cross Country (CC).

You get the sense Volvo has created a maze of a showroom lineup so it can corner buyers into certain models. Usually, our reviews aren’t designed to judge a company’s product portfolio or how a company does business, but this vehicle presents us with no choice as we try to come up with some sort of evaluation for you. 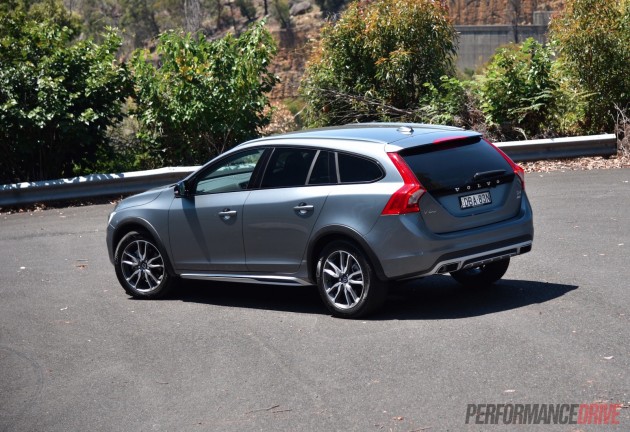 Both the V60 and XC60 are at the pointy end of their lifecycle and have been on sale for a few years now. However, the V60 Cross Country is new to Australia, having been launched – rather quietly – mid last year. It comes in one variant only; the D4 Luxury. It’s priced from $63,375. That makes it $5700 more expensive than the front-wheel drive 2.0-litre V60 D4 Luxury, and it’s actually $2610 more expensive than the XC60 D4 Luxury with the exact same engine.

As briefly mentioned, the D4 engine in the V60 CC is completely different to the engine in the regular V60 D4, producing 140kW and 420Nm. A higher pressure version is fitted to the D5 XC60 producing 162kW and 440Nm, while the regular V60 D4 uses a new 2.0-litre twin-turbo four-cylinder generating 140kW and 400Nm. Confused? Join the club. We guess it can be a good thing to have slightly different engines for slightly different models to help separate them.

Okay, so once you decide if you definitely want all-wheel drive the choice can be narrowed down. It can be further cut down if you decide you’re very interested in fuel economy. That effectively cancels out the $63,990 all-wheel drive V60 T6 petrol. Now, do you need the higher ground clearance of the XC60 or would you rather the sleeker V60? Let’s start by talking about some of the standard features. 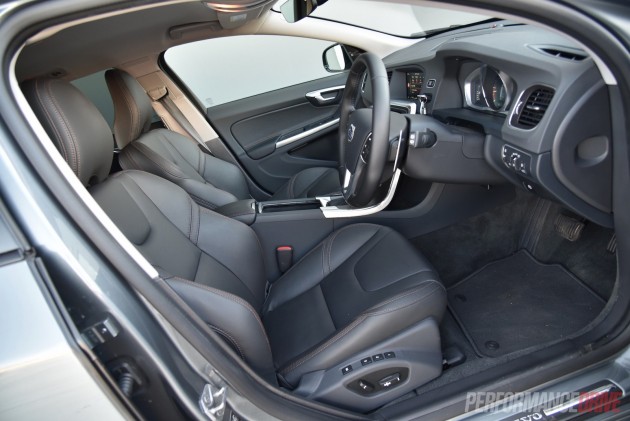 Adopting the company’s ‘Luxury’ trim line brings soft and voluptuous sports bucket seats wrapped in leather (full leather a $750 option), power adjustable in the front, along with auto wipers and bi-xenon active cornering headlights, and some of Volvo’s latest safety systems such as low-speed collision mitigation. Compared with the XC60, the V60 CC actually misses out on a charcoal filter for the climate control, a power tailgate, and “anti-submarining” front and rear seats, despite being priced slightly higher.

Like the XC60, the V60 CC comes with Volvo’s now-ageing LCD (non touch-screen) interface. It was quite modern and clever when it was launched but it is now superseded by the various cleverer touch-screen setups that are around, including the awesome tablet-style unit fitted in the new XC90 and S90. This system comes with sat-nav as standard and provides you with various functions ranging from the climate, audio, and available driving systems. Our main complaint is the cumbersome operation of the dial controls, and the menus that require too many button selections.

Connected to the interface in this test car is the awesome, optional Harman Kardon 12-speaker sound system, requiring a $1650 investment. It cranks out loud and clear sounds, either via USB, Bluetooth streaming, or the old-fashion Compact Disc. Our max-volume test resulted in an ear-bursting 102.6dB.

Overall, the packaging and cabin practicality is exceptional. There’s plenty of space for passengers in the front and back, good headroom, and a classy yet clean-flowing atmosphere in traditional Volvo style. We love the innovative climate vents in the B-pillars, and loyal Volvo users will appreciate the 430-litre cargo capacity. Not surprisingly, the XC60 offers a touch more cargo space, rated at 495 litres. 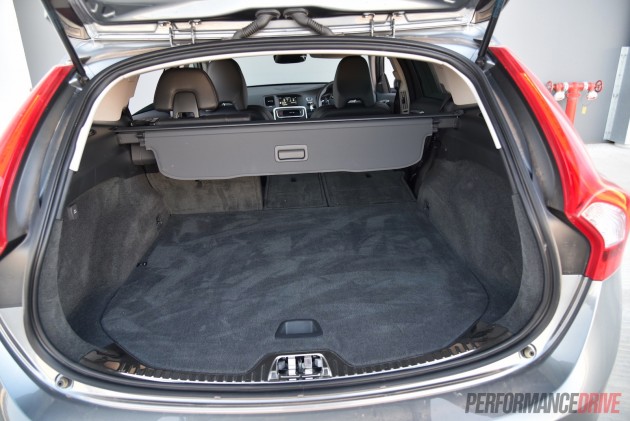 One of the main reasons you might go for the V60 CC over the XC60 is for the on-road handling. The V60 is noticeably more composed and agile, both around the city and out in the country. Highway driving also seems smoother, perhaps thanks to its lower ground clearance and road-oriented tyres (235/40 R18 vs 235/60 R18 on the XC60).

Out on the highway with the optional adaptive cruise control ($4300), this car just eats up the miles. In that respect, the V60 Cross Country really is the ideal vehicle for crossing the country. The six-speed auto, while a bit clunky and slow when driven in a sporty manner, provides long ratios to support the car’s excellent highway-eating ability. It feels rock-solid too, with high winds and standing water having little affect on its directional stability, no doubt helped by the Haldex four-wheel drive system.

The five-cylinder engine here is a beaut unit. Maximum torque is available from just 1500rpm, which means it surges strongly away from roundabouts and away from intersections, and as a bonus, there is a distinct five-cylinder howl when you wind it up. Power delivery is just as strong, peaking at a reasonably high 4000rpm (for a diesel).

Our VBOX GPS timing tool didn’t do the performance justice. We timed a best 0-100km/h time of 8.48 seconds, however, it actually feels much quicker than this. It’s one of those cars that performs best during roll-on acceleration. It will also pull rather hard from higher speeds, during overtaking and so on. The quarter mile comes up in 16.32 seconds. 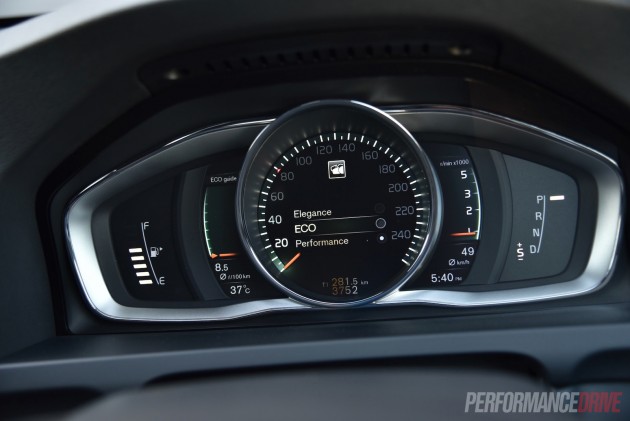 Volvo is in the process of discontinuing this engine, with some models, such as the regular V60 D4, already getting a new 2.0-litre four-cylinder unit. Engineers have managed to extract similar power and torque from the smaller unit, resulting in better fuel economy. During our week, the average consumption was around 8.2L/100km with this five-cylinder motor. We think you could get closer to the official 5.8L/100km rate but you’d be hard-pressed to achieve it in anything but highway conditions. Comparatively, the front-wheel drive V60 D4 with the new four-pot engine offers an official consumption of just 4.5L/100km – keeping in mind it is two-wheel drive.

Off-road performance is limited here, as you would expect. After all, the Cross Country isn’t an SUV. Instead, it’s designed to provide traction and clearance on slippery and uneven surfaces, such as a dirt road or, perhaps more fittingly, in the snow. Ground clearance is raised from 136mm from the V60 to 201mm in the CC, stopping short of the 230mm offered with the XC60. On a dirt road the all-wheel drive system shows complete relentlessness in holding traction, even with all of that torque and Volvo’s decision to use road-oriented “green” tyres. However, mildly rough dirt roads are exactly where things top out for the CC; 201mm of ground clearance just isn’t enough to go any further.

One criticism we do have with its dirt road ability is the ABS tune. On a number of occasions for us there was a serious lack of braking performance on the dirt, at times frighteningly skipping over the dirt with no real stopping power at all. We suspect Volvo engineers didn’t even consider dirt conditions during the calibration of the ABS, probably instead focusing on snow and ice. If they did consider Aussie dirt roads, they should be sacked as they obviously didn’t know what they were doing. Tarmac braking performance is superb, with our 100-0km/h emergency test coming up in 37.76 metres taking 2.97 seconds. 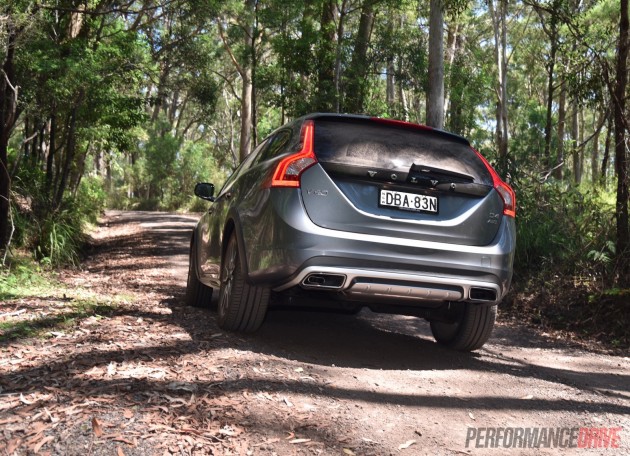 This review wasn’t meant to be a comparison but during our time with the V60 CC we just couldn’t help but try and understand where this car fits into the showroom. And after acknowledging the pricing and equipment of its closely-specified siblings, the CC just seems like a pointless product. Volvo offers two extremely similar propositions, and at a lower price. The equivalent XC60 in particular offers even better value fitted with more standard features.

That aside, if you jump into the V60 CC without having sampled or even looked at the regular V60 D4 or XC60 D4, you won’t necessarily be disappointed here. It offers smooth luxury motoring, a cool five-cylinder diesel engine that’s also very torquey, some off road ability, and a nice set of standard features. In the end, we think you would be better off in either the more affordable, more economical and similarly-equipped V60 D4 or the more affordable and off-road-capable XC60 D4.