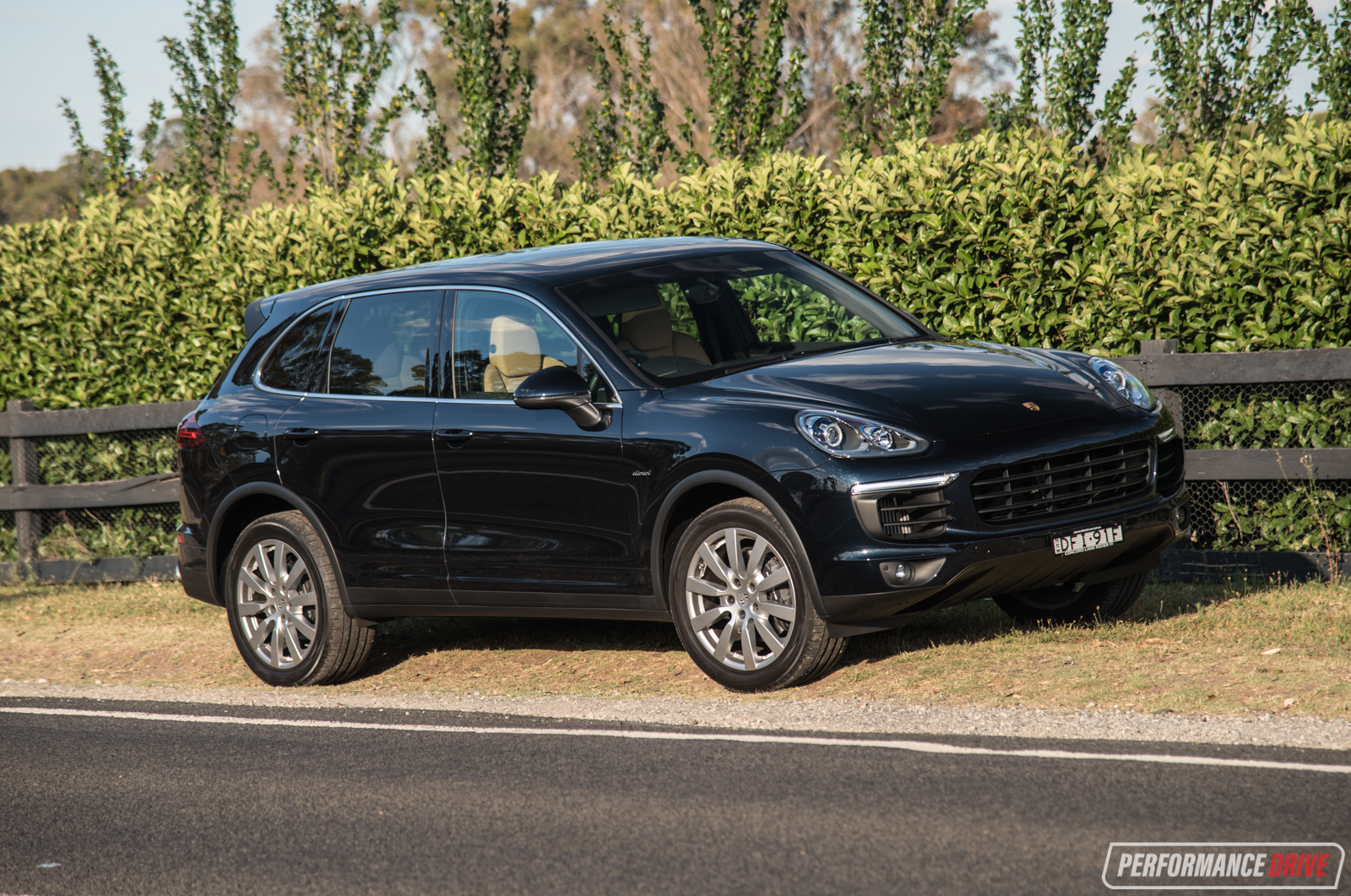 Aesthetically, it’s about as stimulating as witnessing a cow take a dump. But, the Porsche Cayenne is one of the original pioneers of what we’ve come to know as the performance SUV segment. A real sports utility vehicle. Let’s find out how it shapes up against the rivals – some of which should probably drop the ‘sports’ from S-U-V. 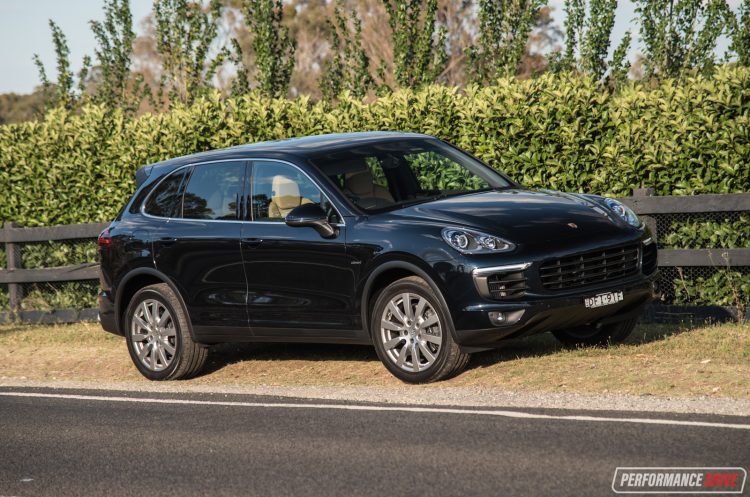 The Cayenne used to be the most popular Porsche on sale, globally, overtaking even the iconic 911. Last year though the big bruiser was overshadowed by the smaller, more affordable and more modern Macan. Australians have, so far this year, bought around 800 more Macans than Cayennes, suggesting the big brother could be in deep need of an update.

It’s now in its second generation but it has been this way since 2011, meaning, technically, this is the oldest Porsche on sale. It’s still based on Volkswagen Group’s PL72 platform, which is shared with the previous Audi Q7 and still used for the current Touareg. Volkswagen commissioned Porsche to develop the original PL71 platform which was used for the first-gen Cayenne and shortly after used to debut the first-gen Touareg.

Porsche is set to introduce the next-gen Cayenne in the next 12 months or so. The new model is set to be based on the more advanced MLB evo-based PL73 platform that’s shared with the latest Audi Q7 and Bentley Bentayga. It’s a lighter weight platform and should help cut some fat from this hefty 2.1 tonne beast.

Here we’re testing the base model diesel variant in MY2016 spec, which comes with the Audi-developed 3.0-litre turbo-diesel V6 generating 193kW and 580Nm. Matched up to the emissions-scandal-entangled V6 is an eight-speed auto with on-demand four-wheel drive.

Prices start at a fairly reasonable $106,100 for the MY16 runout and $107,900 for the MY17 (excluding on-roads) – the first 2017 model orders are scheduled to arrive about now. The price isn’t bad for large luxury SUV in our opinion. In fact, according to a calculator you’re paying about $52/kg of Porsche, making it the best value in the showroom (base model Cayman works out at around $84/kg of Porsche). 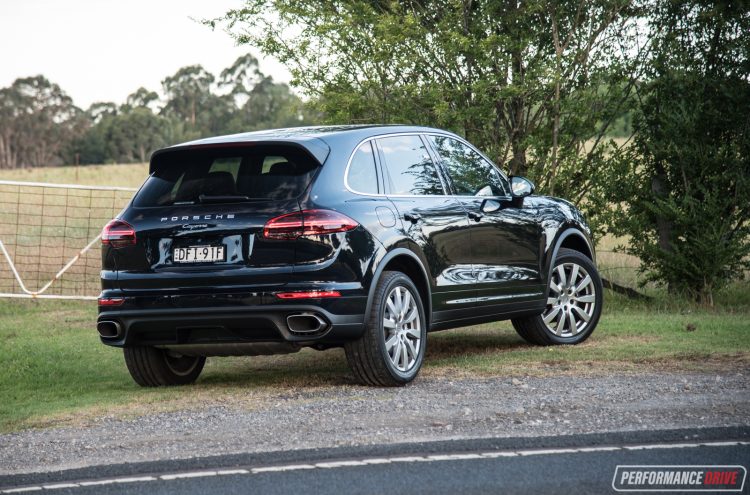 Based on the aforementioned brothers, the Cayenne is very accommodating for five adults. Porsche did introduce sleeker pillars front and rear for the second generation to give it a more dynamic and sporty exterior profile, but overall space inside is abundant.

Front passengers are greeted with a waterfall of buttons that flow down a sloping centre console, supported by big grab handles (which we’re not quite sure what to do with), and a 911-like vertical and pushed forward dash. It’s all very exquisite and it feels really special when you’re inside. Most of the fixtures are covered in beige leather in this vehicle, but buyers can of course go nuts with the options, spanning from two-tone themes, soft ruffled leather, Alcantara, embossed, natural, smooth… and the variety goes on.

Up top on the dash is what can only be described as a laptop from the ’90s. The graphics are pretty clear with small pixels, but the colours and menu functionality is well behind all of the direct rivals that we can think off. Porsche has since updated the screen for MY2017 and incorporated built-in apps. Speaking of screens and graphics, Porsche has wedged in a small LCD unit into the fourth dial in the instrument cluster. On this you can see the pixel squares, it’s that behind par. It was probably an advanced thing back when the second-gen Cayenne was launched in 2011, but it’s not anymore. We love the precision-made little wheels on either side of the steering wheel though – the right one controls the display and the left does the media volume. They have that renowned Germanic quality about them. 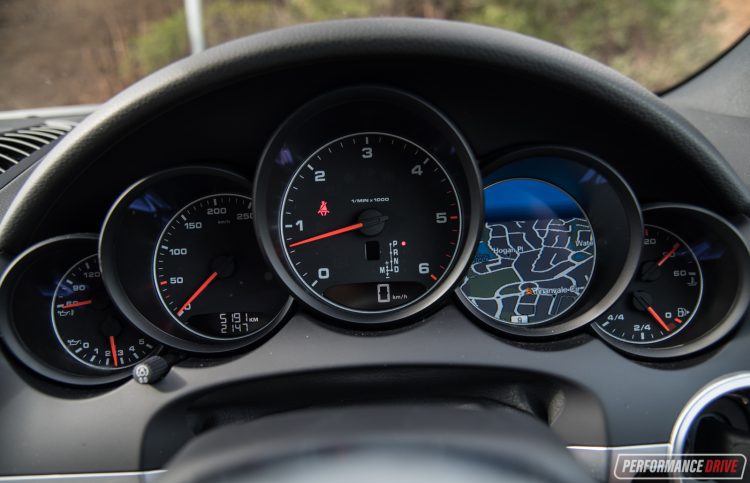 For rear passengers there’s a cool console with stacked climate vents matching those in the front, along with a flip-down armrest and cup holders, and loads of room for legs, shoulders and heads. We wouldn’t say it’s the largest rear seat space in this class, that’d go to the Volvo XC90 or the Audi Q7, but no passenger is going to be complaining here.

A similar thing can be said about cargo space, rated at 670L or 1780L with the rears folded. It’s certainly big enough to handle a couple of sets of golf sticks or the weekly shopping. As a bonus there’s a handy netted storage compartment on the left, and the rear seats, when folded down, click into place essentially locking them down so they don’t flap and move about like they do in some vehicles.

As for the exterior design? Well, to be as impartial as possible this writer asked the wife (who has no interest in cars). She simply described it as; “Ugly. Weird shape and plain looking. If you’re spending that much on a car you want it to be stylish.” She obviously missed the iconic gold Porsche badge on the front, but we can see her point. You need to look at the finer details to appreciate what little initial attraction there is. Such as the big air-gulping vents in the front corners feeding a fresh breeze to the intercoolers, and the slick underbody, as well as trademark Porsche headlights with four LEDs creating an instantly recognisable square outline that can be picked up from a mile away. It’s all fairly slippery too, with a drag coefficient of 0.36. 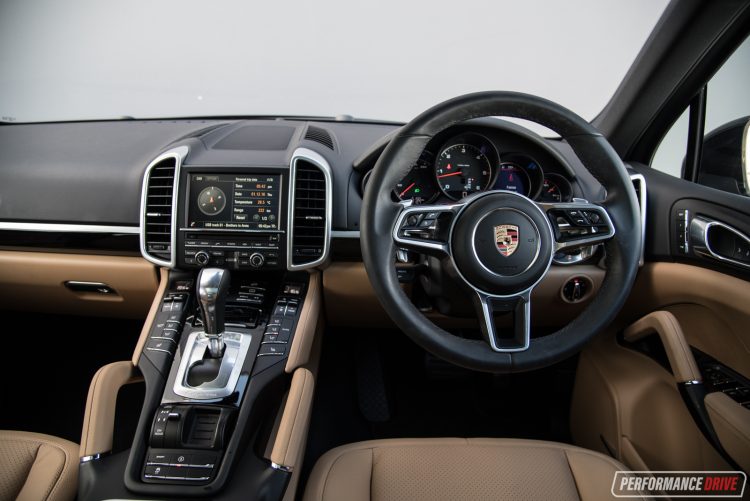 We’re not sure if it’s a Porsche thing but there seems to be lots of whirring and whining noises from the powertrain. It’s like Porsche has tried to implant some old-fashion 911 heritage into the cabin ambience. However, the V6 is a regular mass-produced engine that doesn’t actually produce much power, comparatively; we don’t quite understand why there is so much commotion. At idle our decibel gauge recorded a V8-like 51dB, which is well above par (air-con off, in park).

On the contrary, the engine doesn’t possess that unattractive clatter and rattle synonymous with diesel engines. You can give the throttle a blip and it actually rasps and roars, almost like a flat-six Porsche. Under load, during throttle, the engine could easily be mistaken for a petrol unit. It’s that refined and smooth, with no diesel traits that are audibly detectable. This helps the Cayenne become a beautifully refined and comfortable highway blaster.

Speaking of the highway, it’s here where you’ll get your first taste of Porsche’s renowned driving confidence and capability. The Cayenne is easily one of the most stable and reassuring SUVs on the market, especially at high speeds. The feeling of solidity can be experienced in the Touareg, but in the Porsche with its bespoke suspension and steering it is more engaging. Ride quality is also superb, with an absorbent yet braced and connected feel.

Driving a Porsche, no matter what style of vehicle, should give you a clear representation of the benchmark of the class. Around a nice mountain road there’s no doubt the Cayenne is at the forefront. Surprisingly though it won’t blow your mind in terms of bending the laws of physics. In our opinion, there are large SUVs on the market at the moment that can provide very similar levels of engagement and capability. The BMW X5 offers purer steering in our opinion, and the Volvo XC90 R-Design feels more playful. Make no mistake though, the Cayenne is exceptionally balanced and surefooted, if lacking a little in the fun department. 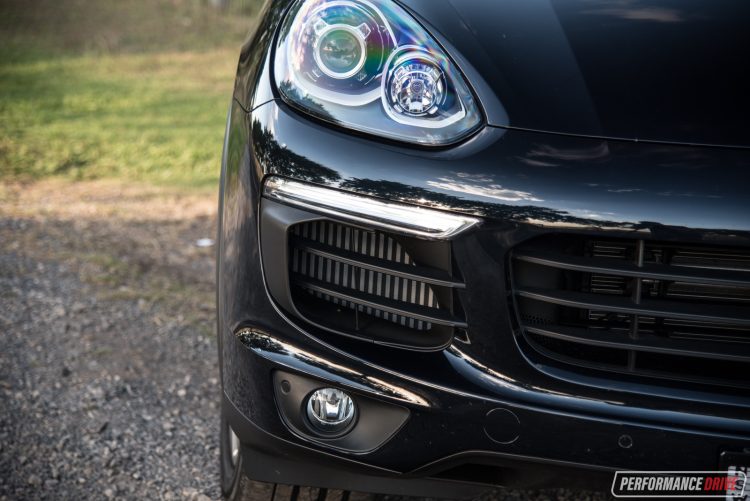 As for the engine’s performance, the 3.0 TDI common-rail diesel provides plenty of heave and low-down grunt. However, again, we’re not particularly blown away (comparatively). And we think you should be in all Porsches. We understand this is the base model diesel but there are many 3.0-litre diesel six-cylinders on the market at the moment that offer more power and torque, and, subsequently, better performance. Porsche claims a 0-100km/h time of 7.3 seconds. The best we could manage with our VBox GPS timing tool was a pretty uninspiring 7.63 seconds. We blame this on the vehicle’s kerb weight of 2110kg (2036kg tare).

Peak torque is available across a relatively narrow rev range, from 1750rpm to 2400rpm, and peak power is reached at 4000rpm. You can rev the engine right out to near-5000rpm, which is very high for a diesel. This gives the Cayenne a higher potential to be rewarding when you’re giving it some, unlike most diesels that rein in all the rev/speed-building fun at around 4000-4500rpm. We did experience noticeable turbo-lag and that’s probably an indication of this engine’s age, debuting in 2004, albeit in a different tune.

Overall, the driving experience of the Cayenne Diesel could be characterised as being confident, reassuring and incredibly solid and stable. It’s not the quickest 3.0L diesel and nor is it the most engaging in the really twisty stuff – not helped by its weighty nature – but it is very smooth and certainly confidence-inspiring.

If you’re in the market for a large luxury SUV that’s fun to drive, there are other options out there at the moment that you should at least test drive for your own peace of mind. The fact that the Cayenne, in its current form, is at the very pointy end of its life cycle means there is a new model just around the corner. We’d expect the new model to be lighter, more engaging, more advanced, and quicker. And who knows, maybe it will look more attractive on the outside?

In the end it’s not really a case where the product is flawed, but simply there are others on the market at this point in time that are newer and more advanced, and subsequently offer superiority in many areas.

CONS:
– Ageing exterior design
– Lots of whirring and whining noises from the powertrain
– Not the most engaging handler in the class
– Not quick enough to deserve ‘Porsche’ badge?
– Engine is involved in VW emissions scandal