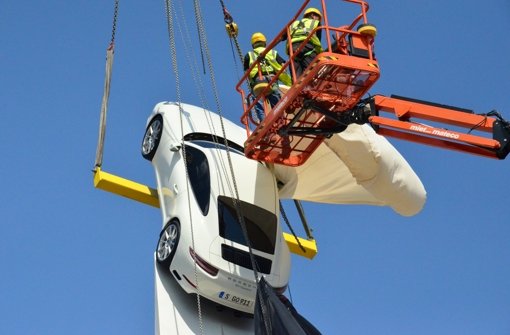 The facelifted ‘991.2’ 2016 Porsche 911 has been inadvertently revealed out the front of the company’s museum in Zuffenhausen, in Stuttgart, Germany.

Porsche was planning to reveal the updated model on a special sculpture outside the museum, but while standing high on a plinth , some wind came along and unveiled the car for everyone to see, Marilyn Monroe style.

We get a good look at the updated rear end which features new LED taillights, new vents in the lower corners of the bumper bar, and centrally-mounted exhausts. There’s also an updated engine cover grille with at least some variants getting vertical slats.

Aside from the facelifted design, Porsche is introducing a number of technology and powertrain updates with the new model. Inside, drivers will be greeted with a new steering wheel that contains a ’Sport Response’ system, effectively Porsche’s idea for changeable driving modes. We can also expect some minor trimming changes and an updated interface.

In terms of the powertrain tech, there’s been a number of rumours floating about surrounding a new family of turbocharged engines. Porsche is yet to officially confirm anything, but according to reports we might see a downsized-yet-turbocharged lineup. With this, output, particularly torque, is set to rise, while improved fuel economy is likely to be the main focus.

We’ll have to wait until the 2015 Frankfurt Motor Show for more information. Porsche may decide to reveal the update online just beforehand. Stay tuned.