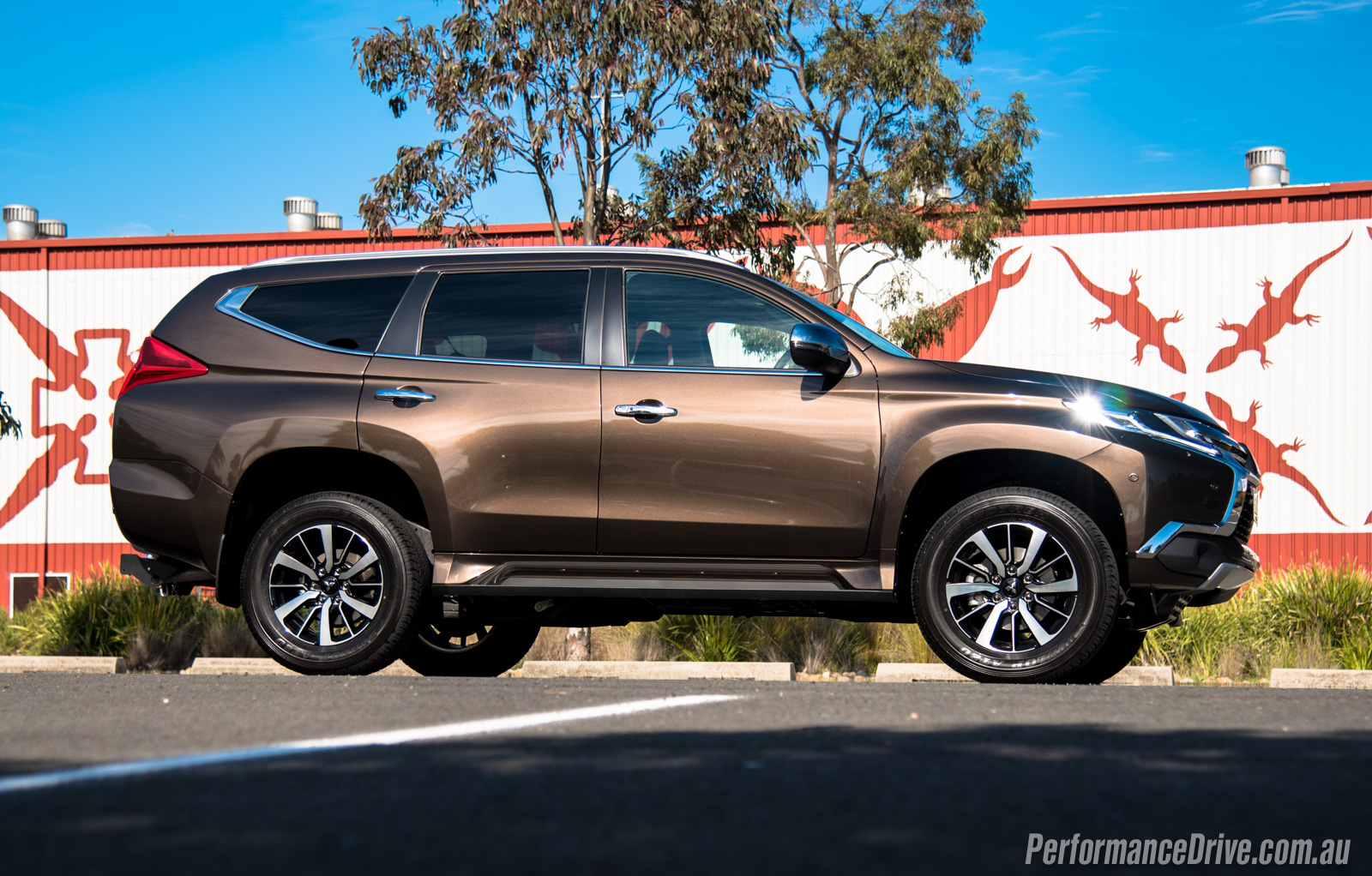 If you’re shopping for a large SUV with genuine off-road capability but the flexibility and space to raise a family, there are plenty of fresh-faced combatants vying for your hard-earned dollar. One of the more recent debuts is the 2016 Mitsubishi Pajero Sport seven-seat, joining the likes of the Ford Everest, Toyota Fortuner and Isuzu MU-X. All have commercial origins, based on the popular 4×4 utes of their respective brands. 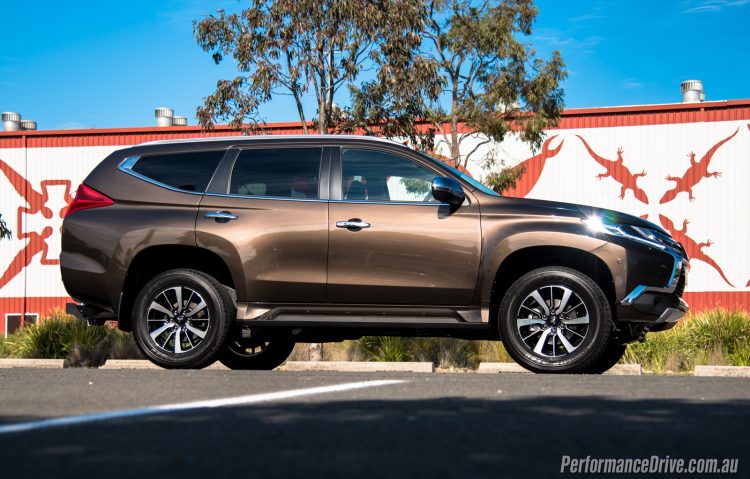 For 2016, the Pajero Sport has come in for a mild update adding a seven-seat option it lacked against the aforementioned rivals. Despite that seemingly big omission, it has still managed a very strong showing on the sales charts, battering all these rivals bar the MU-X and the Toyota Prado.

We’ve reviewed the Pajero Sport in flagship Exceed guise when it was only available with five seats, so this time we will be concentrating on how the Paj Sport fares as a three-row proposition.

In addition to the extra seats (on GLS and Exceed only), all MY16 Pajero Sports benefit from air vents in the second and third rows in the ceiling. In doing so, the flip-down DVD screen for the second row in the Exceed is no longer available. 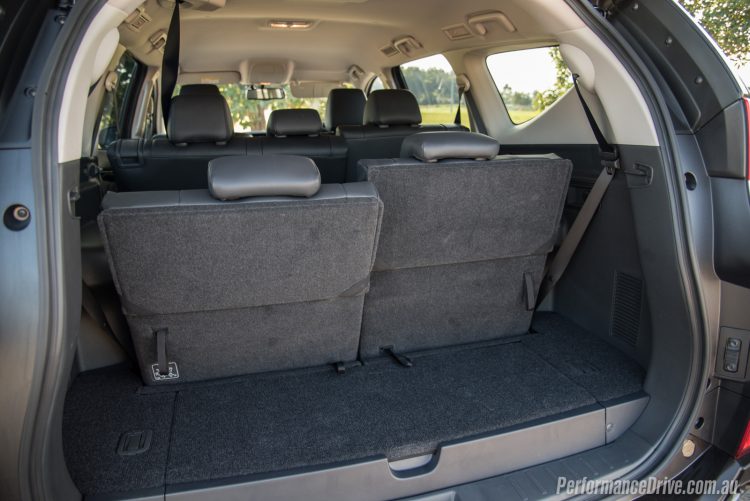 Gaining access to the second row requires pulling a lever which sees the second row backrest and cushion spring forth against the front row, meaning it requires more effort to put it back than some rivals. The second row also slides fore and aft giving ample space, while the third row actually offers decent legroom and a reclining backrest.

When not in use, this slides flush into the floor, giving the Pajero Sport the ability to move larger items than you’d expect. Cargo space expands usable volume from 673L to 1608L (apparently the same as the five-seat version). Unfortunately, the backrest and cushion require two separate pull tabs, which means – like the second row – erecting and stowing is a far more labourious affair than it needs to be. It offers the space efficiency of Honda’s Magic Seats but certainly not the same ease of operation. 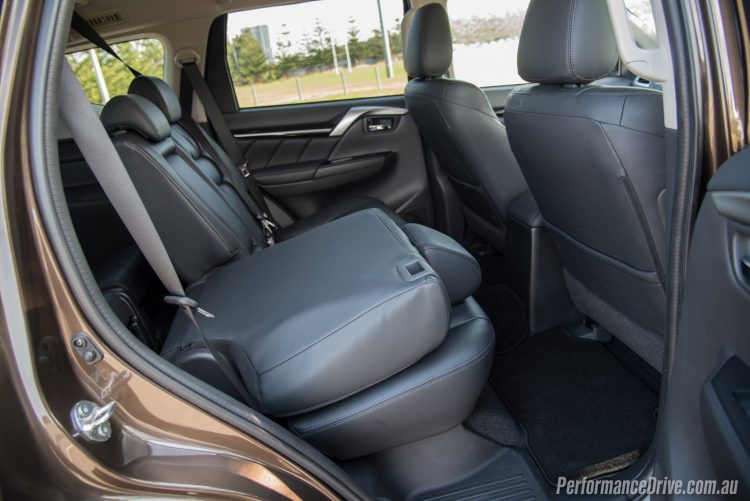 The second row is treated to two 12V outlets so your kids can charge their iPads and hunt Pokemon on the run, as well as cupholders in both rows. Mitsubishi clearly expects customers to utilise both rows frequently.

All other Pajero Sport attributes are present and accounted for, with sumptuously comfy leather seats (albeit with no lumbar adjust), excellent surround-view reverse monitor to make parking a dream, forward collision warning with automated braking technology (low speed), and pretty decent stereo quality and interior presentation. 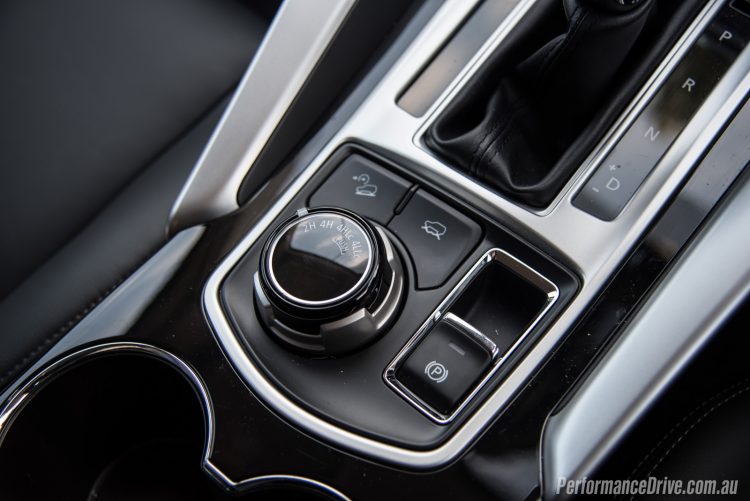 Off-roaders will rejoice in its switchable 4X4 rotary dial that opens their world up to genuine capability, as we found our in our previous test. The lack of satellite navigation in a car of this price range is nothing short of perplexing. Adaptive cruise control would be a welcome addition too, considering it is offered on rivals.

Economy is not outstanding, with 11L/100km being the average during our test. Around 9L/100km is achievable using hypermiling techniques. This is a far cry from the claimed 8L/100km average, not seen even while cruising. 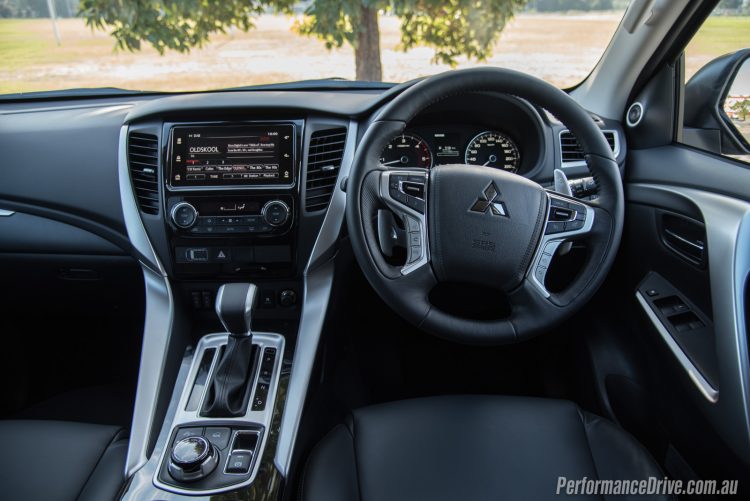 The eight-speed auto is intuitive most of the time, but it is hamstrung by the 2.4-litre diesel’s low 4000rpm redline, hunting incessantly while going up hills to try and maximise the engine’s shallow lungs. Off the line response is always decent though. Once on the freeway with the torque converter locked up you appreciate the effortless nature afforded by those extra gears. If towing is your thing, the Pajero Sport’s 3100kg capacity is among the best in class.

Noise isolation is commendable but for the diesel timbre reminding you it fell out of the same tree as the Triton. Performance-wise, the five-seat Pajero Sport has recorded a 0-100km/h time of 11.24 seconds. We didn’t test this seven-seat model, but we’d expect a very similar number even with its slight weight disadvantage due to the additional seats (1992kg vs 2036kg, tare). 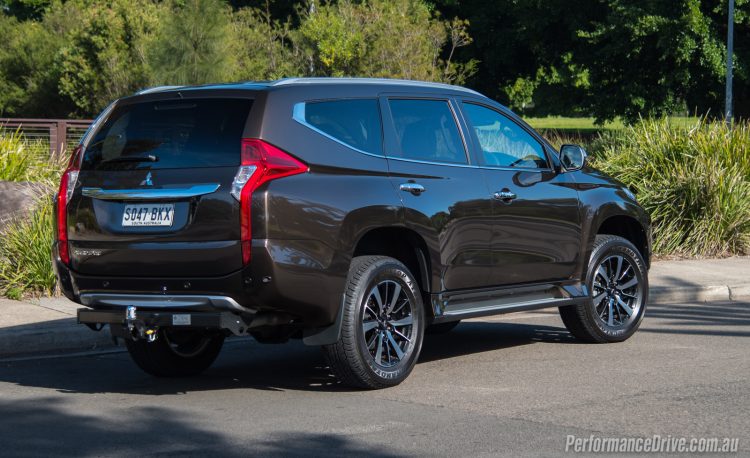 Overall, the Pajero Sport is a shining star in Mitsubishi’s lineup at the moment. It’s easy to see why it is beating off a lot of its foes when it comes to sales, even if it is not without its flaws.

If you’re coming from an older separate chassis vehicle, you’ll find the Pajero Sport surefooted and easy to manoeuvre. If you’re stepping up from a conventional car or crossover, you might be more aware of the extra mass and reluctance to be hustled in tighter situations.

Prices for this top-spec Exceed kick off from $52,750 (excluding on-roads), making it one of the most affordable flagship seven-seat SUVs in this heavy-duty segment – it’s even cheaper than the aging top-spec Isuzu MU-X. This certainly adds to the appeal and is probably part of the reason why the Pajero Sport is selling so well.