What’s it going to be? This could be your last chance to decide whether you’d prefer the Mitsubishi Lancer Evolution or Subaru WRX STI. These are two of the most hotly contested affordable sports sedans to ever grace the tarmac, dirt, and Macca’s car park hangout, in the history of the automobile. 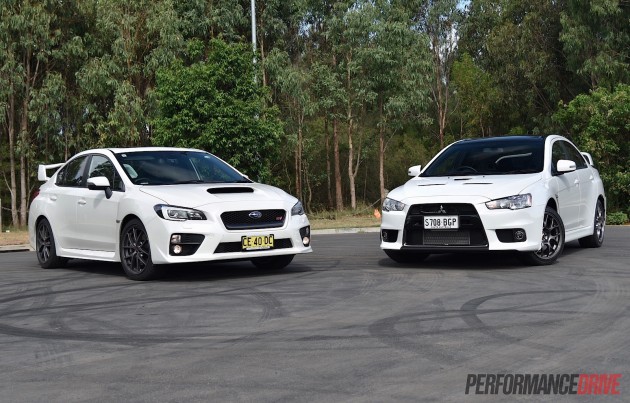 Both of these are facing dire straits though, with the Mitsubishi in particular going out of production as we speak with no sign of a successor on the horizon. The Subaru on the other hand is expected to soldier on, however, it is likely to step further away from its bad-boy, nuts-and-bolts heritage and go for a more advanced eco-focused and everyday-motorist personality for the next-gen model.

Let’s begin by breaking down these two iconic sports sedans. Being 2016 models, these are no doubt the latest and greatest the cars have ever been in terms of powertrain witchcraft and high-tech innovation. Both feature a heavily turbocharged four-cylinder engine sending grunt through a permanent all-wheel drive system. Prices start at $53,700 for the Mitsubishi and $55,690 for the STI Premium (excluding on-roads).

As you can see, these two cars are extremely close for on-paper performance and specification. Even the weights are very similar, with the Evo standing at 1536kg and the STI sitting at 1497kg (tare). This results in a power-to-weight ratio of 6.79kg:1kW and 6.77kg:1kW, respectively. It’s the same story with torque-to-weight ratios too. The differences couldn’t be any narrower. It will be very interesting to see how this translates on the road. 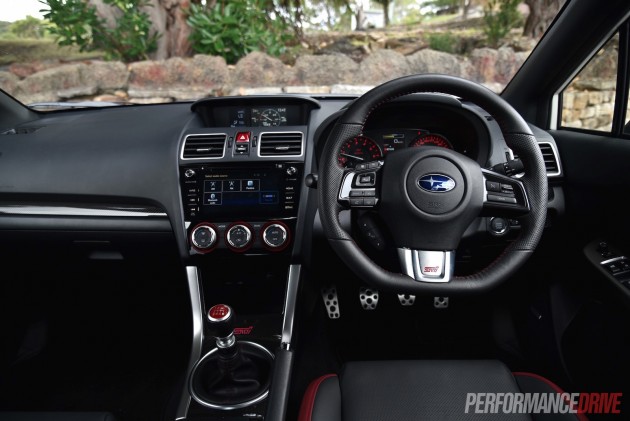 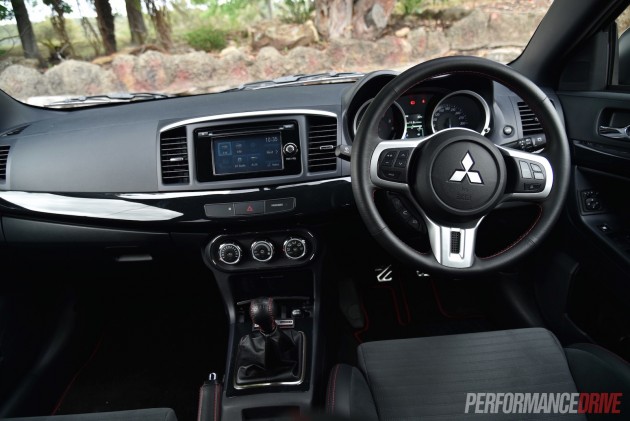 Before we get to that, there’s also the on-board facilities that you have to weigh up before deciding which to choose. And we’re afraid for Mitsubishi fans this is where a wedge starts to push the two apart. The Subaru is noticeably more modern inside compared with the now-nine-year-old Lancer, with finer attention to detail, better quality materials, and an overall more comfortable setting.

The 7.0-inch touch-screen multimedia interface is also favourable in the Subaru, offering in-built apps such as Pandora, a superior sat-nav system, dual-zone climate control, and a high-end Harman/Kardon nine-speaker stereo. The stereo in the STI in particular far outshines the basic six-speaker unit in the Evo. In all fairness though we are sampling the STI Premium version here, which adds an electric sunroof, Subaru’s clever side-vision camera for blind-spots, and a power-adjustable driver’s seat, compared with the non-Premium STI that’s priced around $3k under the Evolution Final Edition.

In the Evo Final Edition you get deeper hip-hugging yet more rigid Recaro bucket seats covered in leather and cloth, while the dash features a basic single-zone climate control system with cheap-feeling knobs and dials. Most of the interior plastics in the Evo feel poorer in quality, and there’s no sunroof option or power-adjustable seats. It does come with a special “Final Edition” start up screen, red stitching, and a unique build plate quoting the 1-of-150 build number.

In-car living and convenience is not the core value of these two; all you need to do is poke your head underneath to see just how serious these are about conquering lap times and blasting through a dirt road. Individuals looking to actually compete with their car will be more attracted to the Evo Final Edition’s underside. It comes with proper aftermarket-style Bilstein dampers and Eibach coil springs, and a front strut tower brace. The Subaru gets in-house dampers and springs and no front strut brace, while both come with Brembo four-piston front and two-piston rear brakes (with STI labels on the Subaru). The WRX pulled up just a bit quicker in our 100-0km/h test, coming to a stop in 38.8 metres and in 2.90 seconds, defeating the Evo’s 39.9 metres in 3.01 seconds. 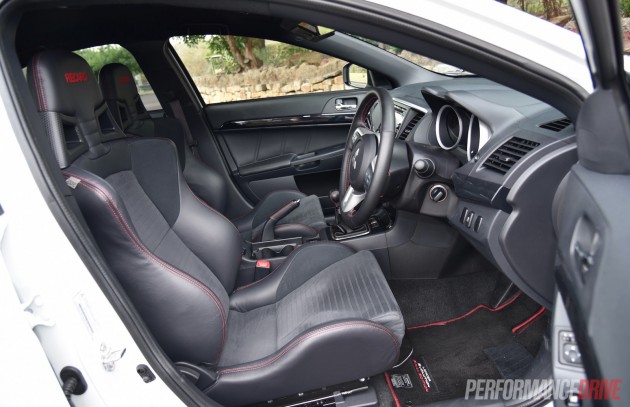 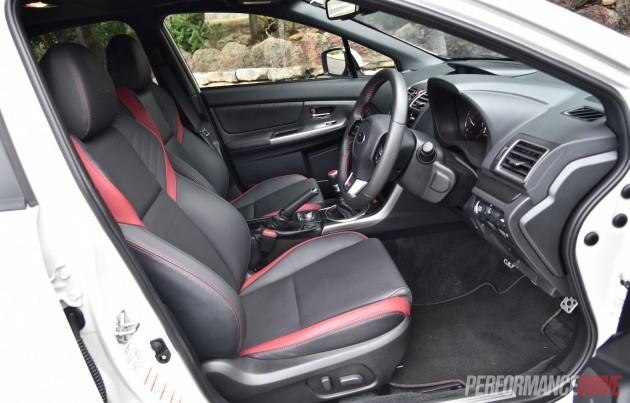 From the moment you drive off in the WRX you’re immediately aware that you’re in a proper sports car. The chunky engine burbles and gruffs as you try to balance the clutch, and the manly gear shift action makes you feel like you are actually moving gears around inside the gearbox with a metal stick. It is very engaging in that way, if a little too clunky and cumbersome to drive smoothly – this is not the ideal vehicle to take your grandmother out for a Sunday lunch, for example.

The Lancer Evolution is a lot easier to drive smoothly. The clutch is more linear in grab, although lacking some feel, and the engine is inherently better balanced and smoother in operation in all parts of the rev range due to its in-line combustion of cylinders. It’s not as everyday-friendly as a regular Lancer, but it is a less complex vehicle to drive in terms of how the greater population would cooperate with it compared with the STI.

Being based on conventional neatly-proportioned mid-size sedans, these cars offer good cabin and boot space, superb visibility, and ease of parking. They come with a rear-view camera as standard, with low window sills and thin A-pillars. Rearward vision is restricted somewhat in the WRX due to the massive wing, however, Subaru has done a better job of making the hole big enough to see through. In the Mitsubishi the aperture through the wing is smaller, and the cross beam cuts straight across your mirror (even with the seat lowered all the way down). 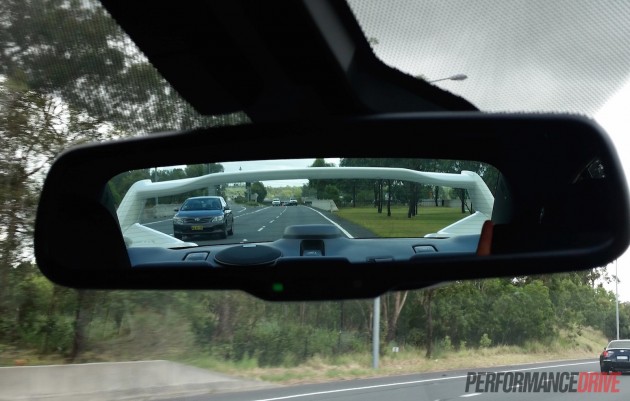 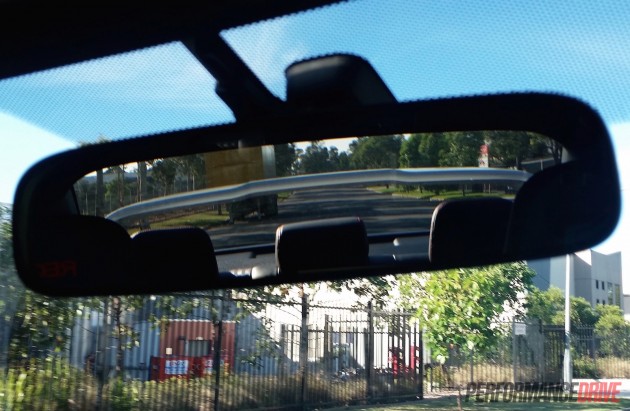 Ride comfort in regular traffic conditions is far from relaxing in either vehicle, with both offering very rigid suspension settings with very little give over road imperfections and minor undulations. We’re not going to say that one is more comfortable than the other, because if you’re after a relaxing custard-smooth ride then you’re probably better off looking at a different vehicle altogether. However, the Bilstein and Eibach combination in the Evo seems more compliant with varying road conditions.

Steering effort is slightly heavier in the Subaru, and more mechanical, while the Mitsubishi presents a consistent and relatively lightweight tiller. Both use a hydraulic-based rack and pinion setup, with the Subaru offering a turning circle of 11 metres compared with the Lancer’s wider 11.8-metre kerb-to-kerb arc.

Where the Subaru shines is with overall liveability. The seats are definitely more comfortable and will suit a wider variety of body shapes and sizes, and you don’t have to hunker down as low to get into them or climb out of them. It might not seem like a big deal but after entering and exiting the Evo a few times in a day it starts to feel like a bit of a workout. The nicer materials and dash layout also helps to provide a more pleasurable everyday driving experience in the newer WRX. As a result, we choose the WRX STI as the best vehicle for the average motorist who intends to use the car as a general piece of transport. 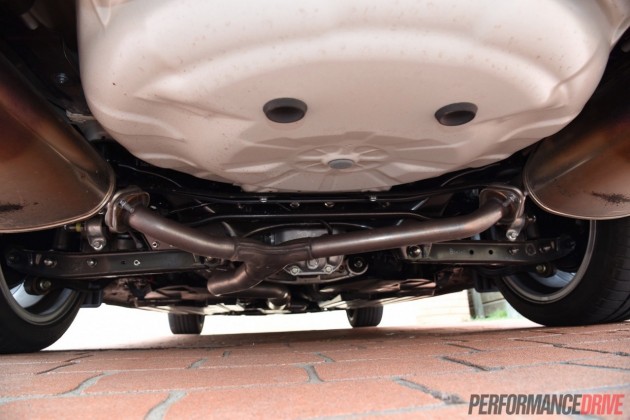 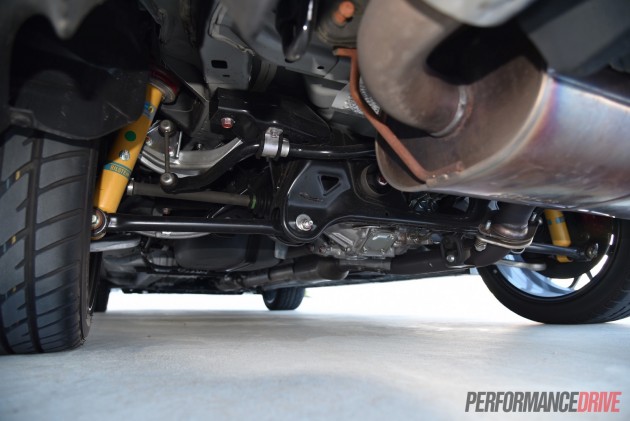 Okay, so now onto the good stuff. These cars were specifically engineered to go flat out through a series of corners, doing whatever it takes to get you from one corner of the earth to another, regardless of the conditions. Wet, mud, snow, jumps, these machines were built to go fast over everything. Sideways, if that’s what it takes. However, one of these is quite obviously built to do it with less fuss and in shorter time than the other. Before we reveal that, we’ll go over some of the key areas in terms of performance driving, and how they react.

Starting with handling. Both present hardly any body roll at all. They remain unbelievably flat and insanely balanced around even curves, at all speeds. This leaves all grip down to the tyres. On the Evo are a set of 245/40 Dunlop SP Sport 600 tarmac-oriented tyres, while the WRX STI gets newer-gen 245/40 Dunlop Sport Maxx RT (racing technology) items. Both are wrapped on BBS 18-inch alloy wheels (lightweight forged alloy on Evo). On dry tarmac you need to be seriously pushing it to get either setup unstuck.

Turn-in is sharper in the Evo, and it holds on for longer before understeering. The clever all-wheel drive system in the Evo, despite being almost 10 years old, is superior to the WRX’s mechanical setup. If you take the racing line and just go for it with natural moves, the Evo is incredibly committed, intelligent, and sure-footed. Oversteering is also possible in the Evo if you provoke it, while understeer will only present itself if you do something unworldly with the steering and mash the throttle.

The STI will hold on convincingly for a long time before eventually giving in to a little understeer when really pushed. At this tempo the STI presents its first main flaw; the steering. If you’re hammering around a corner and you encounter a bump, which is quite often really, the STI will kick-back with some steering column shudder. It feels as though it needs a damper for the steering, or perhaps a strut tower brace like on the Evo. Using the mechanical all-wheel drive system can be advantageous in any situation, as it can be easier to predict, depending on your driving skill level. 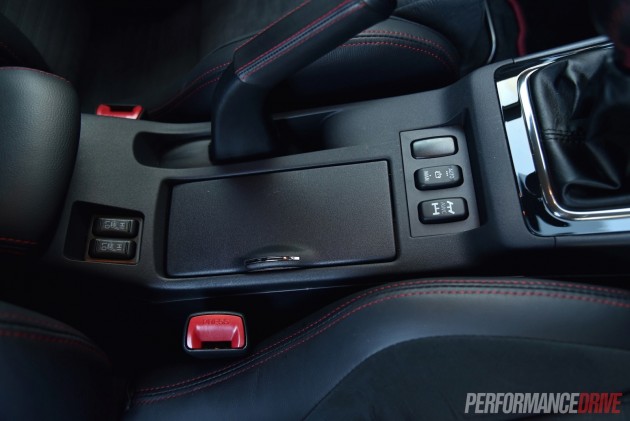 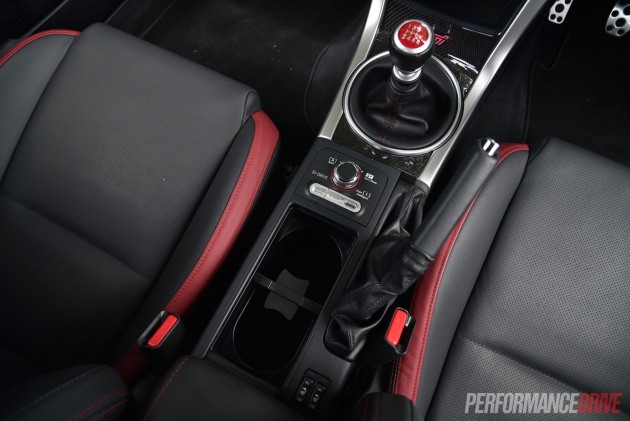 Getting the power and torque down from the engine in either car is fairly straight forward. Both express some initial turbo-lag before all hell breaks loose from around 4000rpm upwards. On wet tarmac the Evo will easily spin all four wheels in a straight line if you nail it with the traction control off. It’s a savage machine. The Subaru is more civilised in power delivery, despite feeling just as rapid.

In terms of outright straight-line performance, the Evo recorded the quickest times across all tests. We achieved a best 0-100km/h of 5.02 seconds in the Evo and 5.27 seconds in the STI. We also recorded a best quarter mile of 13.62 seconds in the Evo and 13.97 in the WRX, interestingly both crossing the line at 164km/h. There isn’t much in it but the Evo is evidently the quickest, keeping in mind both were tested on the same strip of tarmac on the same day with the same driver, at quite a warm air temperature of 28-29 degrees.

So, which one is the best performer? After hard test driving in both vehicles, back to back, the Evo comes out as the more skillful machine. It can get around corners with such finesse, it’s difficult to keep up with it. It darts into corners – power down – and rockets you out with exceptional dexterity and adaptability. It feels and is smarter than the WRX, and it’s always one step ahead of you. In that respect, in can be the less exciting car than the more involving WRX STI. However, around a race track or on the dirt, in terms of outright performance, the Evo is the champion. 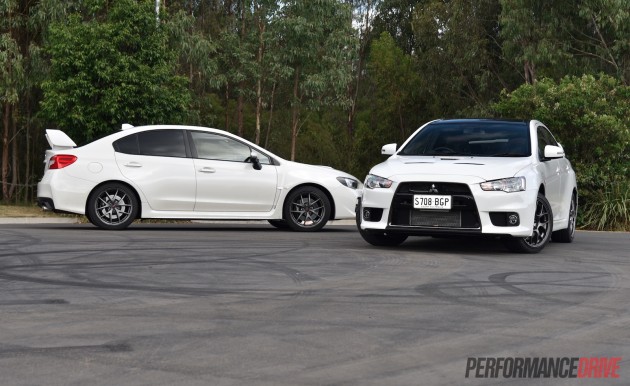 Which one should you buy?

Well, this is the difficult question. Firstly, it just depends on what you’re planning to do with it. If you want an everyday vehicle, the WRX STI is more comfortable and liveable, better equipped in terms of features and in-car technology, and it feels more exciting especially in mundane suburban conditions. It also sounds better and is slightly more fuel efficient in the real world. It is the one to buy if all of this is important to you (most of us).

If, on the other hand, you want to enter some sort of motorsport event or club event where you’ll be competing, we’d suggest the Evo. It is quicker and overall more capable when driven flat out. Given that it’s the last Evo, it might also increase in value over time. 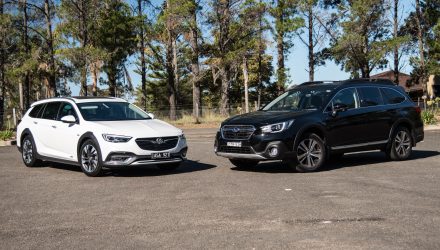 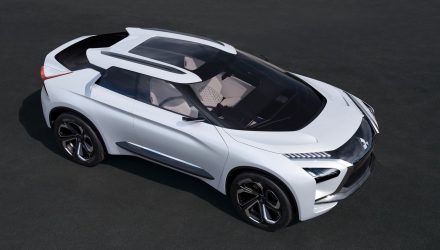 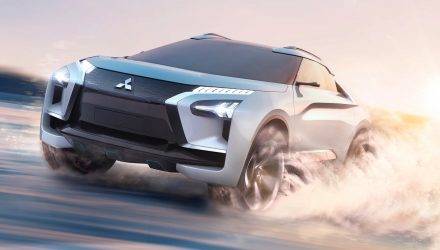 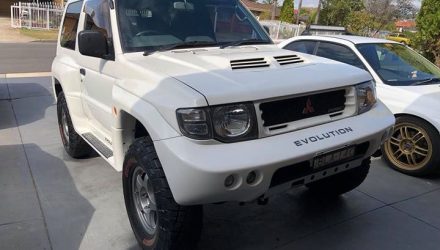