Honda has confirmed it will unveil the next-gen US-spec 2016 Civic sedan in Detroit and Los Angeles simultaneously on September 16.

The now tenth-generation model is expected to come with a new 1.5-litre turbocharged VTEC four-cylinder engine. It will follow in the footsteps of the new Type R, which is the first turbo Civic ever introduced.

No specific details on the engine have been revealed at this stage, and it’s understood no specs will be released with the car’s debut next month. Instead, September’s unveiling will apparently be just about showing the new-look design of the exterior and interior.

Going with a turbo motor though we should see increased economy, as well as improved performance – the current Civic hatch is one of the slowest vehicles in the class we’ve tested. Even though efficiency is already quite good, the turbocharger is likely to bring down consumption and also bring down emissions levels.

As for the design, this teaser image shown above shows a sleek silhouette with defined wheel arches, a focused nose and front end, and a neatly finished off rear that blends in with the C-pillars. It’s all taking inspiration from the Civic concept car, shown below.

Inside, passengers are expected to be treated with increased luxury this time around, along with a full infotainment touch-screen system with various on-board apps including Android Auto and Apple CarPlay. Heated front and rear seats are said to be on the way too, along with safety technologies like Honda’s LaneWatch system.

Even though this will be the US-spec Civic, some of the technology is expected to trickle over into the Euro and Australian-spec versions later down the track. We’re especially looking forward to seeing a turbo VTEC eventually make its way Down Under. 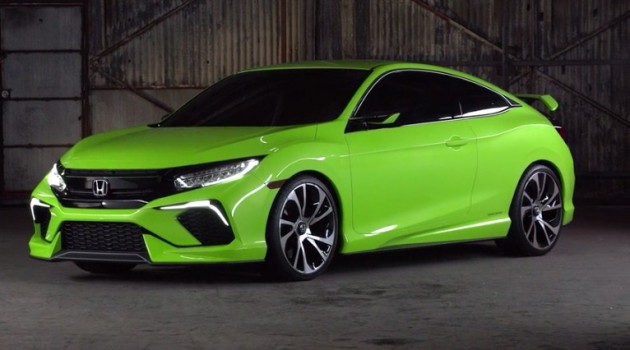