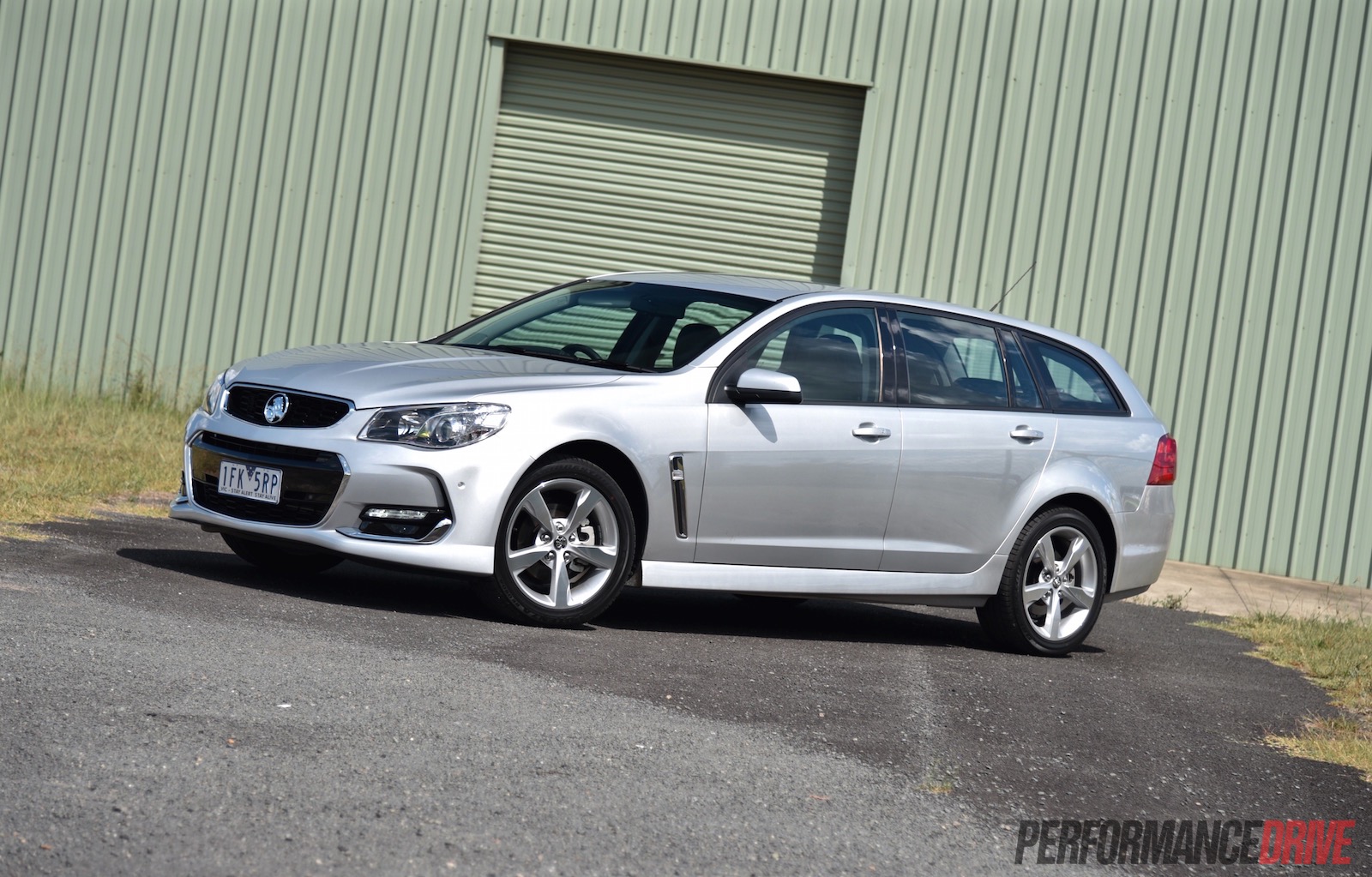 What you’re looking at here is the final chapter of a story that started in 1948; the birth of the six-cylinder, Australian-built family car. For the best part of seven decades it has been an Aussie staple, like steak and chips. While the bulk of the changes for the last locally-assembled Holden Commodore, the MY2016 VF II, have been reserved for the V8-engined models, the SV6 wagon here has also received some (mostly cosmetic) tweaks to keep it looking fresh and appealing. 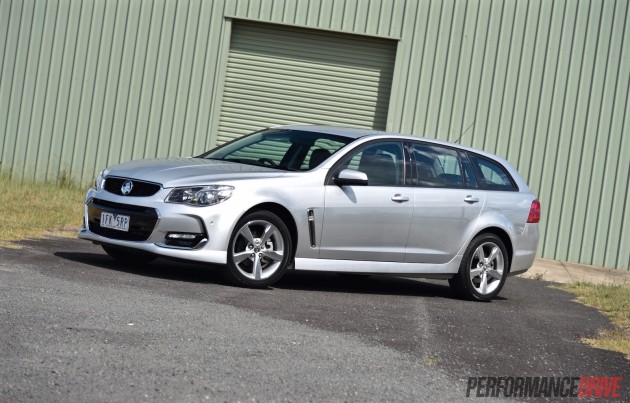 The majority of the update centres around an aerodynamic new front bumper bar – now with vertical slits in the corners – that channels air around the front wheels, as well as new taillight treatment which addresses one of the areas left untouched in the 2013 transition from VE to VF.

While the VF Series II is the last model code for Australian-made Commodores, there might be some slight specification enhancements for the 2017 model year, and some special editions are all but given. It seems Holden’s enthusiasm acknowledges that this type of vehicle still has a decent following in Australia.

By contrast, long time arch rival Ford Falcon seems to be suffering a slow, cruel euthanasia from its parent. It received a mild facelift last year, the FG X, to carry it to the end of 2016. This is a full year before the last VFII is expected to roll off the line. Aside from the expected XR8 and XR6 Turbo Sprint editions, Ford seems reluctant to admit it still manufactures a car here. And from the lack of promotion, most wouldn’t know what an honest and accomplished car it is.

Nevertheless, Holden gained a lead with the VF that Ford will never again challenge. Fit and finish, materials, refinement and dynamics come into another level with VF. So, is the last of the line a fitting send-off? 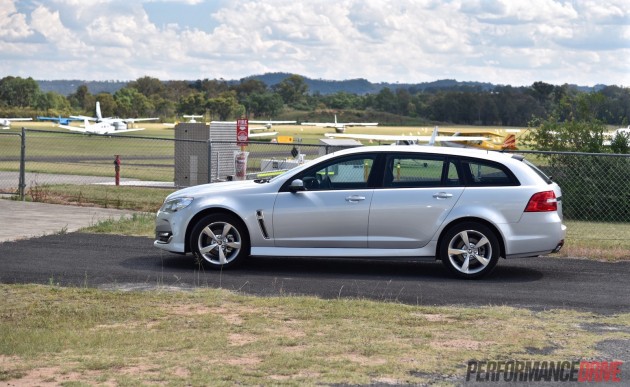 The SV6 features the same 210kW 3.6-litre V6 and FE2 suspension as the 2014 model, offering a sportier setup compared to the fleet-special Evoke, with its 3.0-litre V6.

The handsome proportions of the Sportswagon from 2008 remain, with muscular wheel arches and confident front-end styling an evolution of the landmark VE. The new grille treatment definitely lifts the overall appearance, while the LED taillamps add some flair too. Sitting on new five-spoke 18-inch wheels, shod with beefy 245/45 tyres, the car is instantly recognisable as a Holden and has visual presence, despite the sheer ubiquity of Commodores.

Step into the cockpit and it still looks fresh from the major overhaul it received two years ago. The MyLink touch-screen is intuitive, while the supplementary audio controls are distraction-free and fall readily to hand. The audio itself is decent and doesn’t distort at high volume, offering good bass and sound quality — as good as you could expect for this money. Using a decibel gauge the peak rating we saw was 98.6dB.

Other nice details include the font on the dual-zone climate control knob, and faux carbon fibre spears. Blue mood lighting in the centre console and door handles work extremely well in terms of adding premium feel. The cabin is very roomy and spacious for all occupants as well, standing at the class benchmark.

With 895 litres of boot space with the seats up and 2000 with them down, the Sportswagon is a very handy thing, even if it doesn’t quite match the long-wheelbase wagons of yore, or a ute for outright practicality. You can definitely move things you wouldn’t dream of in a sedan. The tailgate is heavy though and could use an electric close function like some new rivals are sporting.

The only niggles could be that the trip computer screen only offers one function at a time, unlike the newer LCD display for the upper-variant Commodores, and the rear windows are only one-touch up, not down, for some reason. But overall the build quality, materials and textures in the interior are an endorsement of not only the Holden assembly workers, but the component suppliers who develop and build the parts. 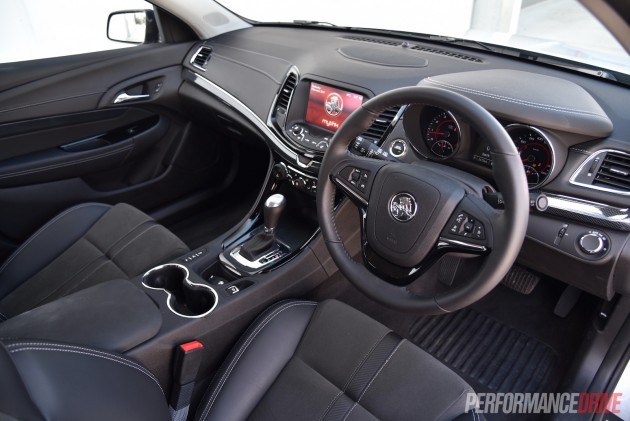 Push the starter button and the dials do their dance as the engine settles into an imperceptibly quiet idle, registering just 41.5 decibels from inside the cabin. The Malibu-sourced gear lever and electronic park brake are both pleasant items to use, while the steering seems to offer more feel off-centre than its V8-engined brethren. Parking and manoeuvring is a bit of a challenge in tight areas, with the blind-spot-inducing A-pillars and sheer size apparent from the get-go.

Front and rear parking sensors, plus an excellent rear-view camera, help no end here but, it must be said, the camera is a bit slow to load when reverse is engaged. The parking assistance system works very well in most situations. Old people will freak out and think you are being reckless if you wave your hands in the air, like on the commercial. So it’s probably best not to do that.

The 210kW V6 is responsive and seems to be ‘Commodore’ in its power delivery, with a ‘thrashy’ and harsh top-end. Ultimately though it lacks the character and tune of other V6 engines and is not really the highlight of the car. Performance can be best described as decent, with 0-100km/h coming up in 7.28 seconds and the quarter mile achievable in 15.47 seconds. A real-world average fuel economy of 11L/100km, and 7L/100km on the freeway, is not too bad for the car’s size and performance level.

We noticed some wind noise around the A-pillars when cruising, but perhaps that is only because Holden did such a superb job of isolating other sources of noise. The car feels solid and very comfortable, as we’ve come to expect from this type of car.

Around town the suspension could be too firm for some, especially over speed bumps, for example, but there is excellent rebound and a strong chassis to make it tolerable. Taken onto some twisty bits, the Commodore still shines the brightest out of the rivals. The FE2 suspension keeps the car sitting flat, and turn-in is eager thanks to an engine set well back under the bonnet.

As cornering speeds increase, the electric power steering loads up in a progressive, communicative way, keeping you informed about what a balanced chassis can do. Out here it truly belies its size and 1732kg tare weight. Ultimately, it’s not a sports car but it’s as well set up as you could ask of a car of this type and price.

In our opinion the gear ratios are too tall for back road blasting, but the weight transfer is progressive and fun so you can confidently turn off the DSC and throw the car around a bit and explore its limits. A bit of oversteer is also possible with weight shifting and some early throttle, if that’s your thing. 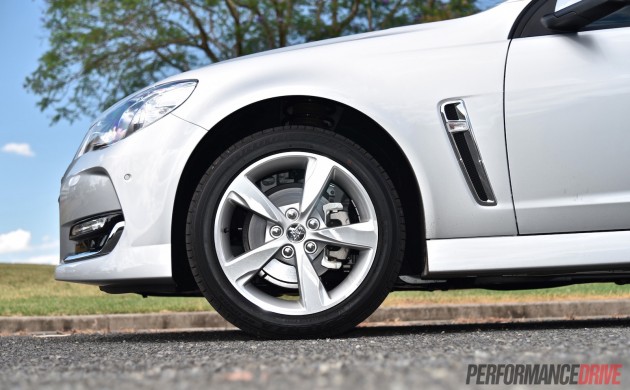 This does not feel like a car at the end of its life. Cars like this are a victim of our cultural cringe – one of the less admirable attributes of Australians. In a way, that’s what forced Holden to over deliver with the VF, with sales still strong, consistently averaging around 2000-2500 sales per month. There’s no doubt the Commodore is defying the downward trend of its malnourished rivals.

The imported, likely front-wheel drive successor has a lot to live up to, but then Holden’s designers and engineers are a passionate, talented bunch so we should consider ourselves lucky if some of the traditional Commodore flavour comes through.

The bottom line is you can’t really find this same combination of space, fun-to-drive character and sporty appeal, power, quality, and standard features and comfort for the money. In SV6 Sportwagon form, it is a downright bargain.