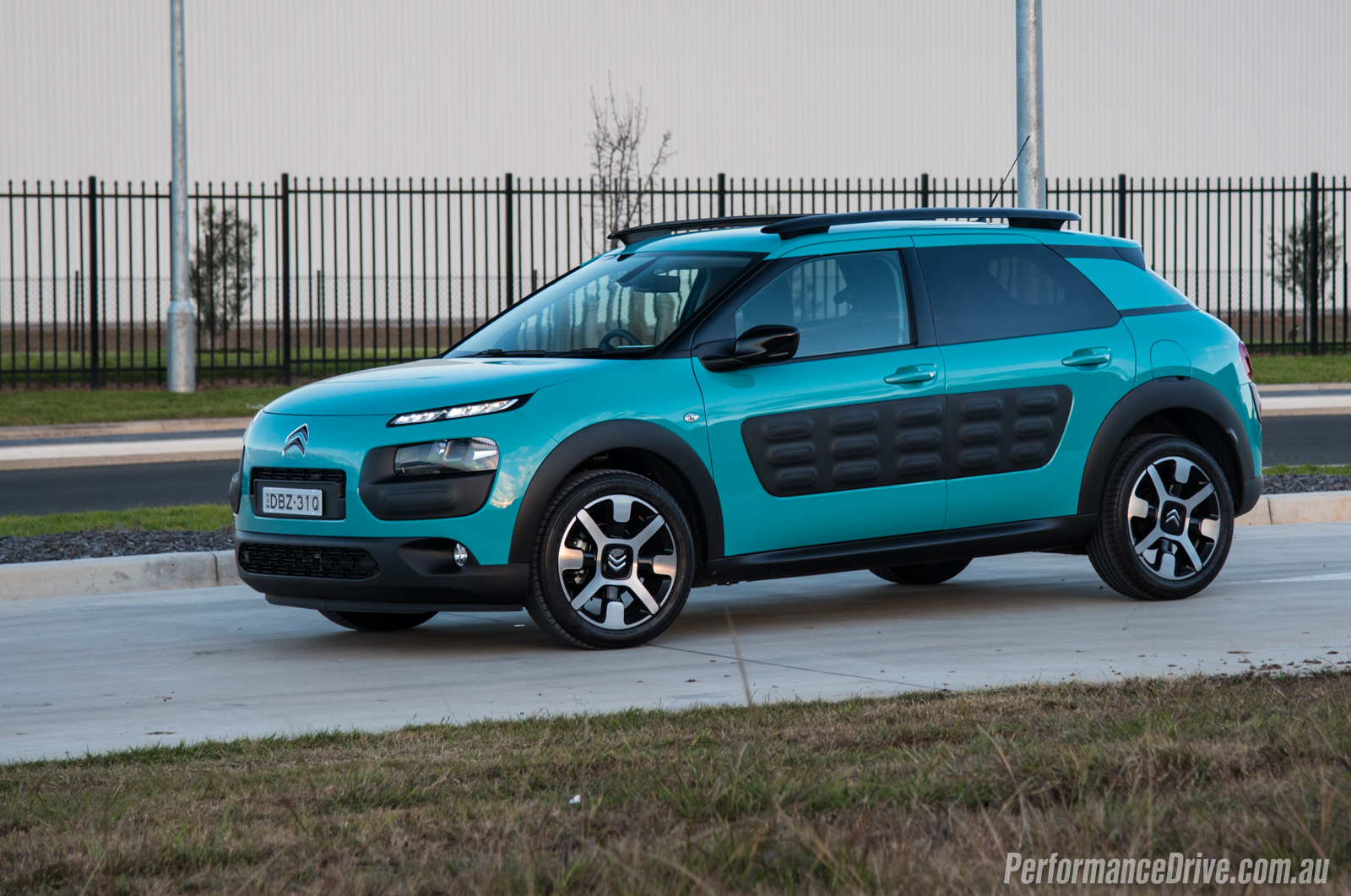 Quirky cars normally come with more than a few sacrifices. The new Citroen C4 Cactus 1.2 PureTech, being one of the quirkiest of them all, is a bit different. When you scratch beneath the weird plastic surface it appears to shake that equation out of its roots. 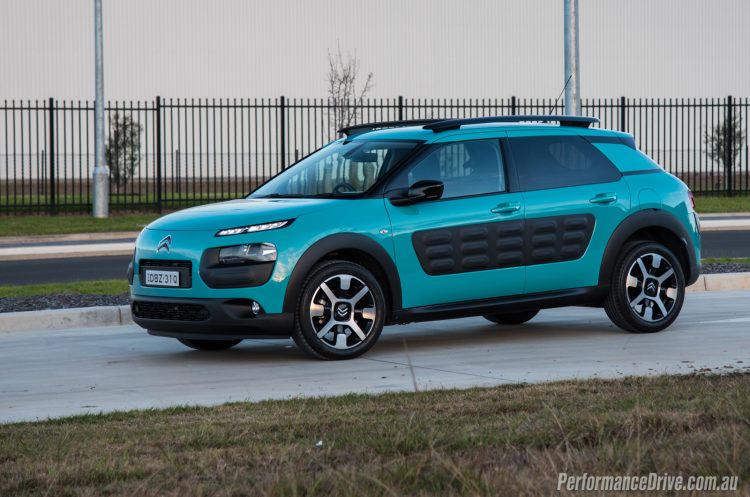 The inappropriately-named Citroen Cactus is on a mission to disrupt the increasingly-popular small SUV segment by introducing a unique yet innovative and practical approach to urban motoring.

In Australia there are just two variants of the Cactus; the HDi turbo-diesel available only with the much-ridiculed semi-automatic transmission, and this PureTech 1.2 turbo-petrol that comes exclusively with a five-speed manual. Both are front-wheel drive.

We’ve tested the diesel Cactus, and, aside from the troublesome automatic transmission, we loved every bit of it. Maybe this manual petrol version is even better? Maybe it’s the best SUV in its class? It’s certainly the funniest, most thought-provoking car available on the new car market. Let’s take a look. 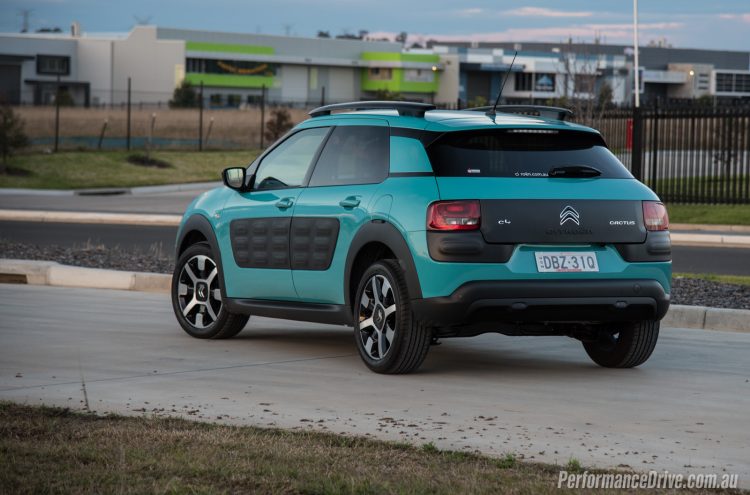 Despite being a European SUV, the Cactus is very reasonably priced. This petrol model starts at just $26,990, putting a number of basic Japanese and Korean rivals into their places – the automatic diesel is $3000 dearer.

For that you get one of Peugeot-Citroen’s (PSA) latest 1.2-litre PureTech turbo-petrol three-cylinder engines. It produces a petite 81kW and 205Nm. On paper, it’s clear to see this is not the most powerful SUV in the class. However, weighing in at just 997kg (tare) means it does bring a favourable power-to-weight ratio. More on the performance later.

Inside, passengers are treated to perhaps the most relaxing and pleasant interior setting in the class. The seats remind us of chairs that you might find in a furniture shop. Chairs that you might actually buy. And although this manual transmission version misses out on the grin-inducing front bench seat offered in the diesel, there is heaps of room for this class of vehicle. 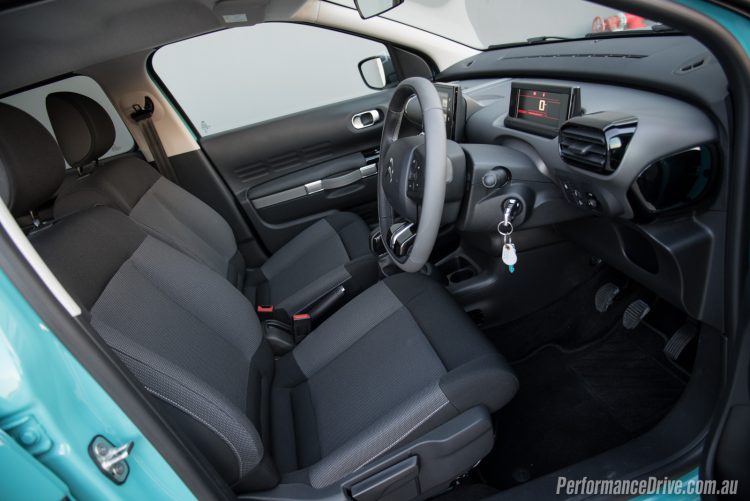 Every aspect is designed to be as simple yet interesting as possible. Take the instrument cluster, for example. It’s just a thin LCD panel. It’s so basic that it’s charming. In saying that, a tacho would be nice, even as a digital bar lining the top of the panel.

The centre console carries a similar theme. There are a couple of shelves for your phone, lots of storage options around, a typically French cup holder only large enough for a short black, and up top is PSA’s touch-screen interface. We like the interface. It comes packed with sat-nav as standard, a rear-view camera, digital radio, various apps, and it supports various media types including Bluetooth music streaming.

Rear seat space is a little tighter than in the front, particularly for headroom. But legroom is great for this segment, and you get plenty of cool design features to look at such as the crazy-big door pulls that double as storage, and the huge door pockets that are almost big enough for carry-on luggage. Speaking of which, boot space is rated at a respectable 358L, expandable to 1170L.

Overall, Citroen has done extremely well with packaging. You get plenty of standard features, some of which are costly options in much more expensive vehicles, and the pure intrigue and emotion you get from the design really livens up your day. It’s inspiring. While most carmakers follow the leader, whoever the leader is at the time, the Cactus goes its own way and offers something that’s not only unique but also practical and useable. It makes you wonder why the others always stick to their herds. 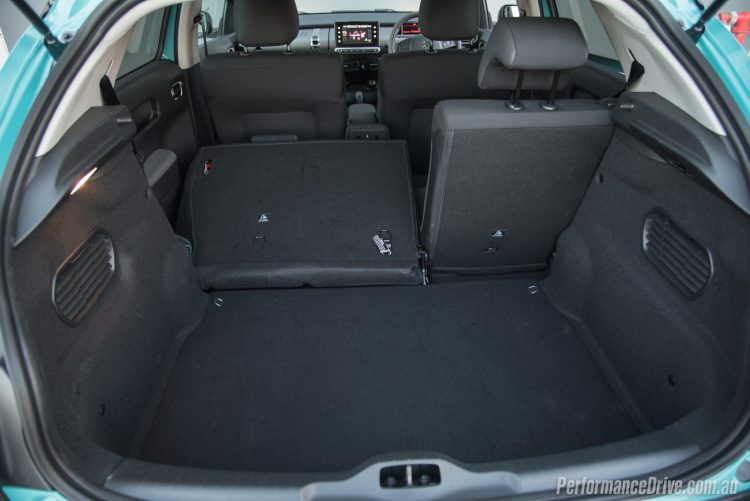 First and foremost, the manual transmission is significantly smoother and more engaging than the semi-automatic in the diesel. So, if you can drive manual we suggest you at least take a look at this.

Secondly, the power. In diesel form the Cactus develops just 68kW but a reasonable 230Nm. With the petrol generating 81kW and 205Nm, you get a lot more power (the stuff that helps you overtake and keep higher speeds going) without much sacrifice in torque. Across the industry standard 0-100km/h test this example stopped the clock in 10.22 seconds. This compares very well against our best 12.78-second time we achieved in the diesel.

Okay, so 0-100km/h isn’t everything but it does give you some idea of a car’s acceleration and how it’s placed against its rivals. It doesn’t tell the full story though. Especially in the case of this beaut little petrol engine. This is an energetic and animated unit. We love it. It thrums and burbles up to speed, and in-gear acceleration is surprisingly strong. It’s fun to work through the gears, with a light shift action and featherweight clutch. The gear shift movement is a bit long but you soon get used to it.

Around corners the Cactus isn’t as accomplished as some of its rivals. Most of its rivals, actually. It can’t carry the same speed or hold lateral g-force as well as most, and the crude torsion-beam-style rear suspension doesn’t have the dynamic capacity to provide sophisticated compression and movements while cornering. However, and it’s a big however, the ride comfort and general joy of steering this thing down a country road is very attractive.

Like with the engine and interior, the fact that it is so basic means you, the driver, are involved in the journey. And not in a tiring way. Steering communication is good and you almost always know what the wheels are doing, mainly because you know you put them there. It’s a very tactile and interactive vehicle to drive, in other words. 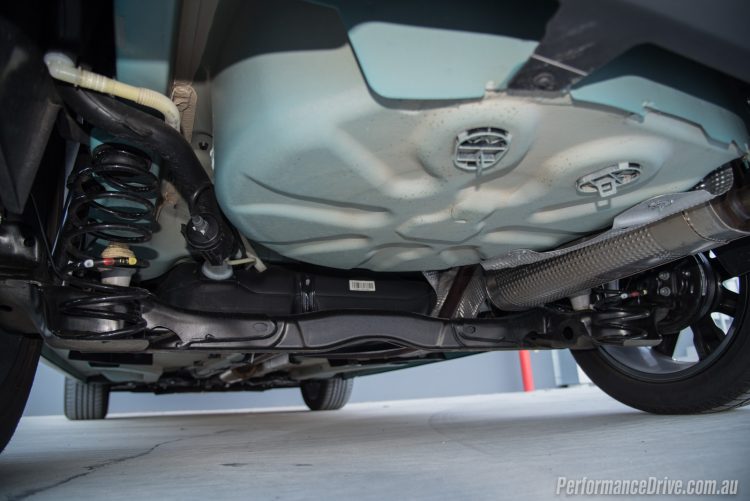 It’s not the quickest SUV in its class and the design is out of the ordinary, but the overall driving enjoyment and character of this thing makes it an extremely likeable product in our opinion. If it were available with a normal automatic we’d even go as far as saying it is the most appealing SUV in this segment. It’s just so much fun, and practical and economical and interesting. The main letdown is that it is crossed off many buyers’ shortlist simply because there is no auto available in petrol guise, and the diesel auto is just stupid.

It’s immediately obvious this is one of those rare cars that wasn’t created purely to turn a profit or to fill a space in the market. It is made with passion, and by those who actually have an interest in and are inspired by motoring. And for that reason, it’s now one of our favourite little SUVs.

CONS:
– Design isn’t going to appeal to all
– Cactus is slang for useless/kaput (in Australia)
– No auto option with petrol