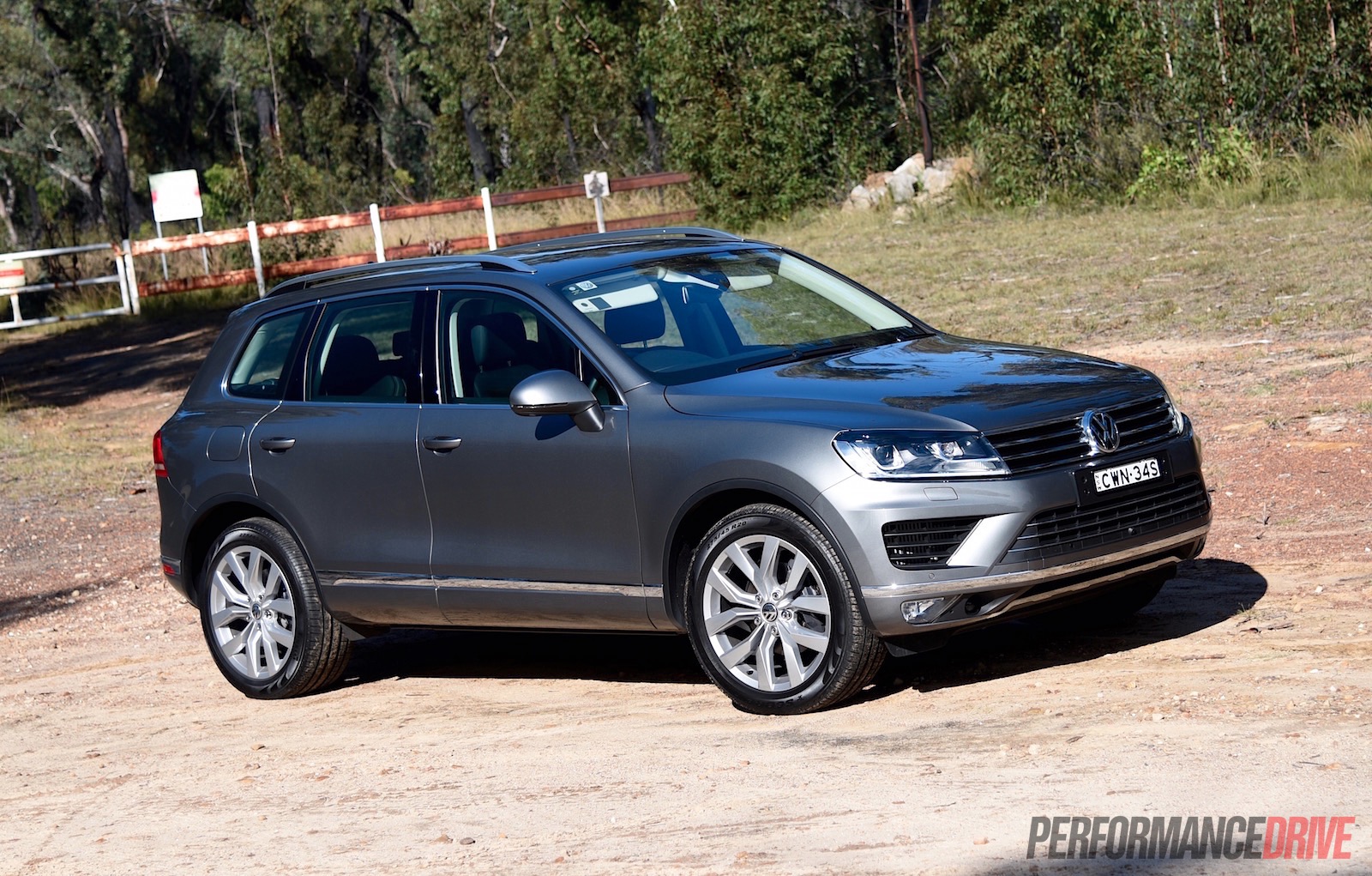 The large SUV market has undergone a tricky overhaul in the last few years; it’s a segment where buyers demand size but also fuel efficiency. This is where the 2015 Volkswagen Touareg steps in. It promises to be one of the best SUVs in the business in terms of blending luxury touring, off-road preparation and overall efficiency into one super-size wagon. 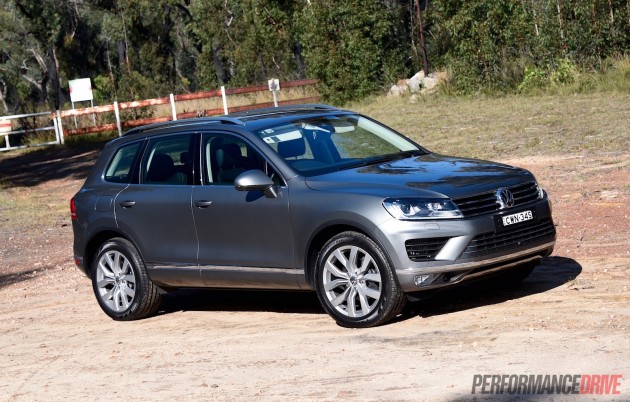 If you’re curious, the Touareg is named after the ‘Tuareg’ inhabitants of the harsh Saharan deserts of North Africa. Although, it is manufactured in Slovakia. Sharing the same underpinnings as the Porsche Cayenne, the 2015 update brings a freshened engine lineup, a streamlined variant range, and some cosmetic touch-ups inside and out. 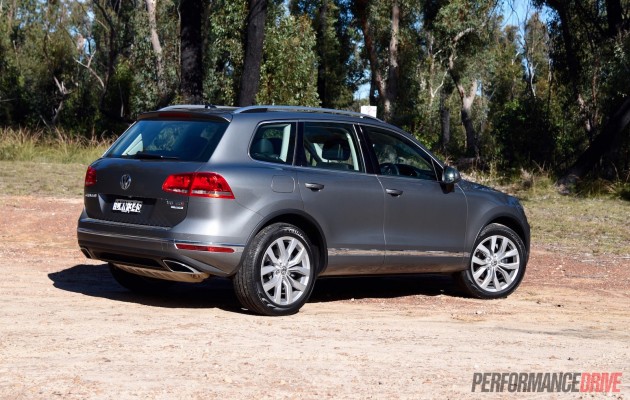 The revised Touareg has had some minor body changes for 2015. You get a refreshed, sharper look which has been achieved with redesigned front and rear bumpers, fog lights, the grille, and alloy wheel designs. Overall, the exterior design possesses a smooth and conservative, yet big and muscular stance.

When it comes to equipment levels, you’re well looked after in the Touareg. Specific to the V6 TDI, you get ‘Nappa’ leather seat upholstery with heating functions and power adjustment in the front, air suspension with adaptive dampening, an alarm system with interior monitoring, tilt sensors, a power tailgate, 20-inch alloy wheels, and ‘Sapelli’ mahogany wood inserts throughout the cabin.

Customers who opt for the Touareg V6 TDI also have the option of a Technology package and a Driver Assistance package. The $3500 Technology package includes area-view parking guidance with a 360-degree exterior view, power front seats and steering wheel with memory, an automatic kerb-view function when reversing, an increased fuel tank to 100 litres (from 85L), and keyless entry with a start button.

At first glance, you would think the Touareg is the cheapest in the segment. But if you add on these packages and some options, the price can soon step in line with the competition. We feel that some of these features should already be included in the mid-range V6 TDI model. 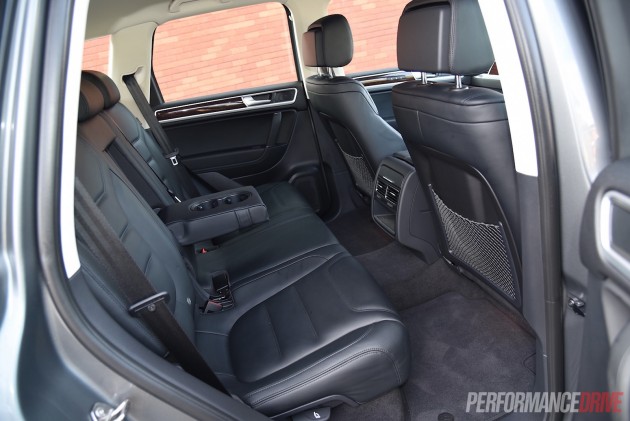 One of the most important aspects of this category of vehicle is the size of the interior. That’s the first thing you’ll notice when you hop in. It is wonderfully airy and spacious inside. Though the centre console is quite high, which makes you feel like you’re sitting in a bobsled, faintly, it would be useful to have an extra space/hole to throw your belongings within the centre area. The centre console is split with two lids too, which we find a little redundant and fiddly.

There are absolutely no complaints when it comes to the comfort of the seats. Every position possible is electronically customisable in the front, including the side bolstering, which is fantastic for bigger people where the bolstering can protrude into the hips.

For the rear passengers, space is aplenty and perfect for keeping families comfortable. We love the foot-well lighting that is under the front seats for rear occupants. It adds that classy touch at night time. The second row is on rails for added versatility, so you can slide it forward or back for more or less cargo room/rear legroom.

In the boot, the helpful electronic tailgate works a treat and doesn’t have an ‘in operation’ alarm that bellows too loudly. The back seats are collapsible with tremendous ease, flipping down with the flick of a lever in the cargo area or from the side of the seat itself. This results in a well-sized max cargo volume of 1642 litres, up from 580 litres with seats left in place. For comparison, the more expensive BMW X5 offers 650L and 1870L.

The overall interior quality and elegance is up there with the competition; the leather is soft and the instrument cluster is sophisticated, with quality dials and a large LCD display. Though, grasping your current speed can take a split-second longer than usual as every second speed denomination is displayed in a smaller font.

In terms of in-car flaws, the standard eight-speaker sound system is sub-par for a luxury SUV, and the slight lag you get from the 8.0-inch touch-screen multimedia system is a bit of a setback. Also worth noting, the side mirrors have indicators that are visible from inside the cabin. These lights can be very confusing in combination with the blind-spot indicators; they are the same orange colour and centimetres away from each other. 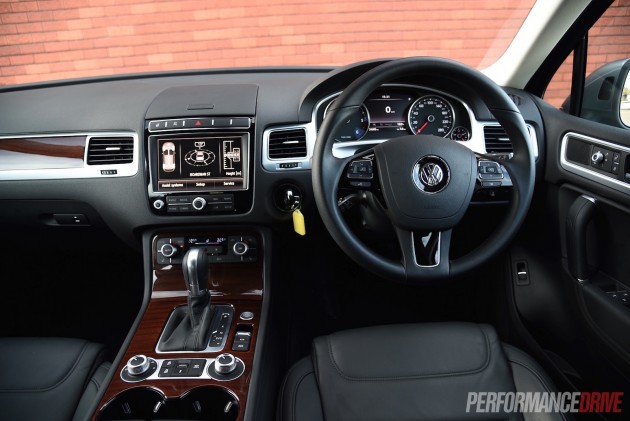 On the road, the Touareg well and truly lives up to its luxury tourer intentions. Most of the time it just feels like you are driving a big car. However, it can take some energy to keep it in the lane, and you do sit high up on the road compared with your fellow commuters. Fortunately, there are aspects of its size that have been well aided. There’s an excellent turning circle, light steering, whisper-quiet road noise and engine hum, and a multitude of parking assistance systems looking out for you.

Along the road, in most everyday conditions, the ride is superb. It soaks up bumps like a genuine German thoroughbred, with help from the adjustable air suspension. The suspension has an outstanding ability not to be disturbed by blemishes in the road – the kiddies will have no trouble sleeping on longer journeys, put it that way. There are three suspension modes to select from for the ride; comfort, normal, and sport. And you really feel the difference between comfort and sport. The sport setting firms up and offers a distinct rigidness, while the comfort mode is more forgiving but can become sloppy if you start pouncing around corners.

We wouldn’t describe the handling as the best in the segment, but it certainly behaves as good as a decent sedan. Feel through the steering is where it misses out in our opinion. There isn’t a high level of engagement or sense of involvement like you get in some German rivals, but the actual body and platform is surprisingly sharp and stable even if you dart down a mountain road with vigor.

Grip is fantastic with the full-time all-wheel drive system, on and off the road. It calculates and then directs power and all of that torque to each wheel with timely precision. You’d assume that an SUV of this size – and weight (2159kg) – wouldn’t perform that great off road. But that’s not the case. The Touareg surprised us with how capable it really is. The height adjustable suspension makes a big impact on its ability. It offer several preset ride heights, making it ideal for a wide range of conditions; 147mm loading level, 197mm road level, 247mm off-road level, and a huge 300mm extra-high level.

There is also an effective hill descent braking system for when it comes to really steep and loose terrain, and if you plan on towing, the Touareg offers a braked towing capacity of 3.5 tonnes. For the more serious off-road enthusiasts, the 20-inch wheels and 275/45 tyres are probably going to become a problem at some point. 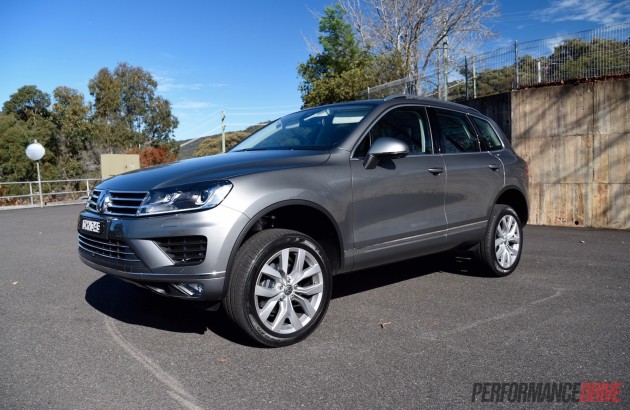 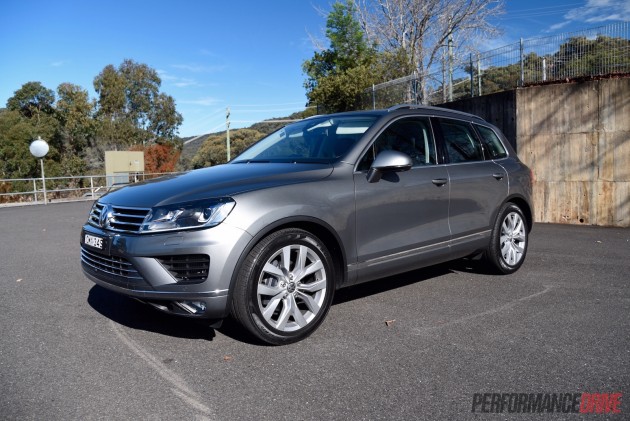 With the 3.0-litre diesel engine under the hood, we had to double check that it was actually a diesel. This engine shows how far diesels have come in regards to smoothness, sound, and refinement. It’s so quiet at low speed with none of that loud clattering, and it actually gives off a nice V6 roar at higher parts of the rev range.

Acceleration from 0-100 km/h can be achieved in 7.5 seconds (as tested), which isn’t too bad for an SUV of this size. The torque is the most impressive – yet necessary – aspect of the performance. With 550Nm available from just 1750rpm, you’re never left feeling breathless on a hill or when carrying a load. It monstrously steams ahead.

Fuel efficiency is praiseworthy too, with official figures indicating 7.4L/100km for combined driving conditions. Our various driving styles returned an average of 7.6L/100km – much lower than we were expecting. With a full 85-litre tank, over 1000km is comfortably doable.

The impressive fuel economy is helped by the delightful eight-speed transmission. Not only is it velvet-smooth, it also seems to line up each gear proactively, rather than reactive soul-searching that we’ve seen with some eight- and nine-speed transmissions on the market. The handy hill-descent automatic down-shifting function works flawlessly, and seems much more prominent and sensitive than similar systems in other vehicles. 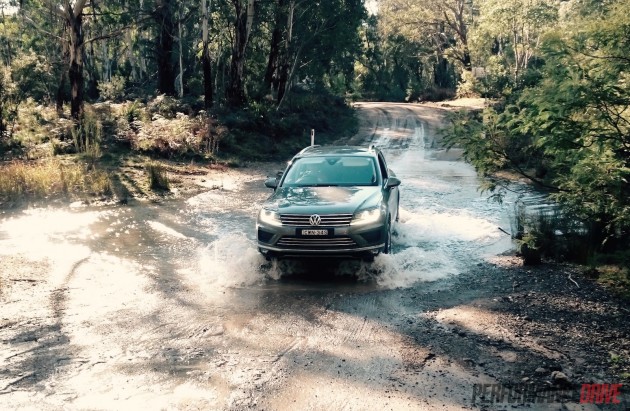 The 2015 Touareg is definitely sharper and better equipped than ever before. The best part about this vehicle though is that it fulfils the original criteria with utter certitude. It is one of the few large luxury SUVs that manages to bring together size and efficiency into a premium high-quality product that doesn’t necessarily require a mortgage adjustment just to buy one. About the only real negative thing we can pick out is that it doesn’t handle as purely as the BMW and Mercedes-Benz rivals. But then, they don’t perform as willingly as this when you go off road.

CONS:
– Sound system is substandard compared with other vehicles at this spec
– Placement of blind spot indicators
– Electronic throttle lags a bit