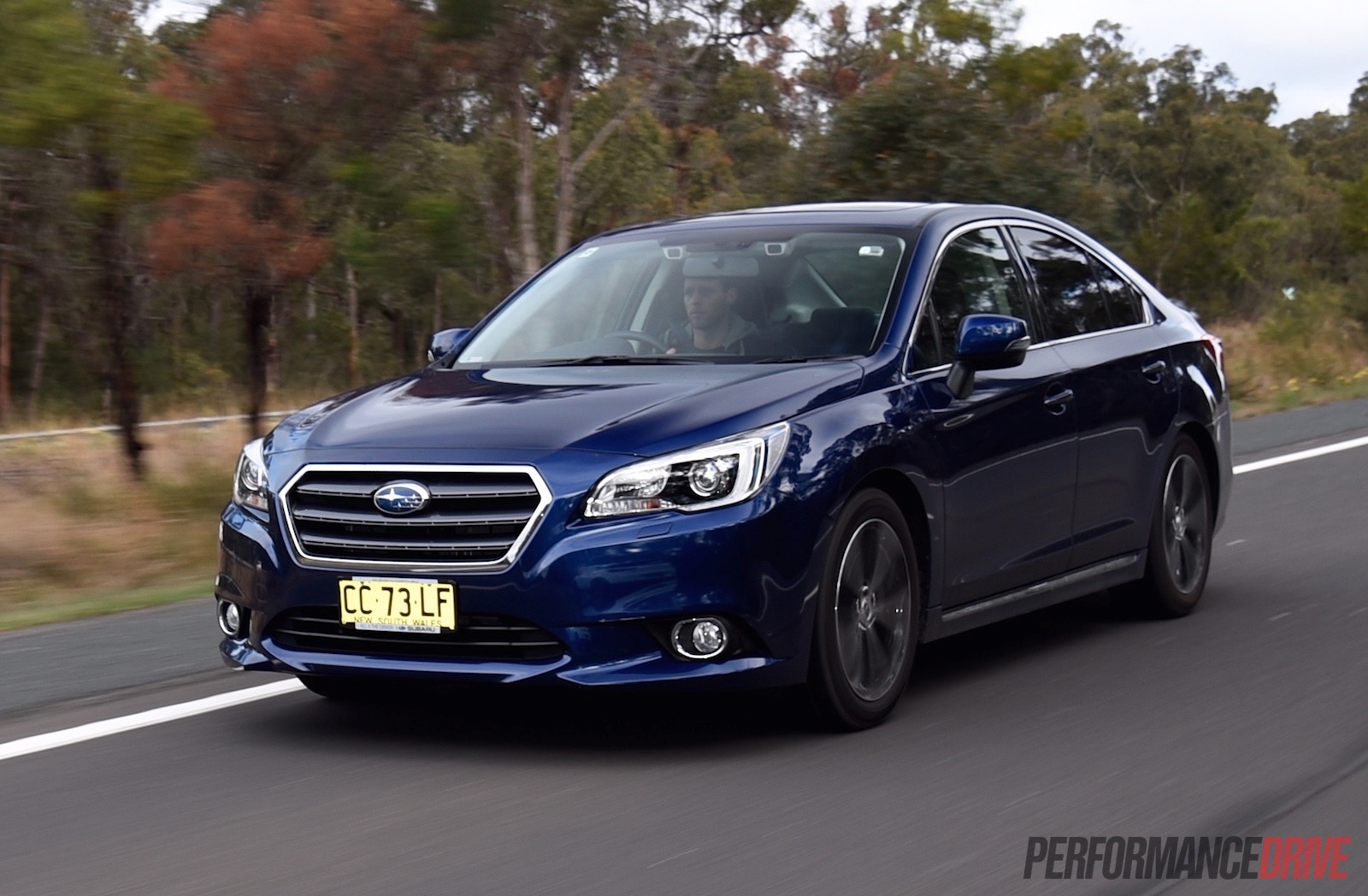 This, the sixth-generation 2015 Subaru Liberty in top-of-the-range 3.6R specification, is now $14,000 less than its MY14 predecessor. So the question that lingers is whether or not Subaru has cut some corners in the hope of luring buyers with a lowered sticker price? Or is now simply a better time than ever to buy a Liberty? 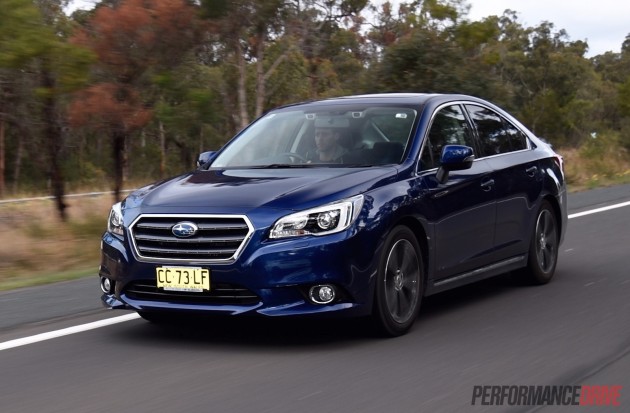 Since its introduction onto the Australian market twenty-five years ago, the Liberty has somewhat been overshadowed by its competitors and has never really had a dominant market share of the medium-sized sedan segment. Now though, the tables have turned. With the demise of locally-manufactured large sedans, Subaru Australia management has formed an aggressive new business plan which will very much interest new buyers, and surely rustle the feathers of buyers of the local stuff.

The Liberty range kicks off with the first model to scrape under the $30k mark, with the 2.5i receiving a $3000 snip and now starting at $29,990. It is powered by a 2.5-litre four-cylinder producing 129kW/235Nm. For $6000 more, the 2.5i Premium adds a shed-load of luxuries. It’s not a bad option considering Subaru has cut $4000 from the MY14 version. This, however, is the flagship Liberty, and it is unquestionably the best value and most featured-packed Liberty ever, coming in at $41,990 (plus on-road costs). 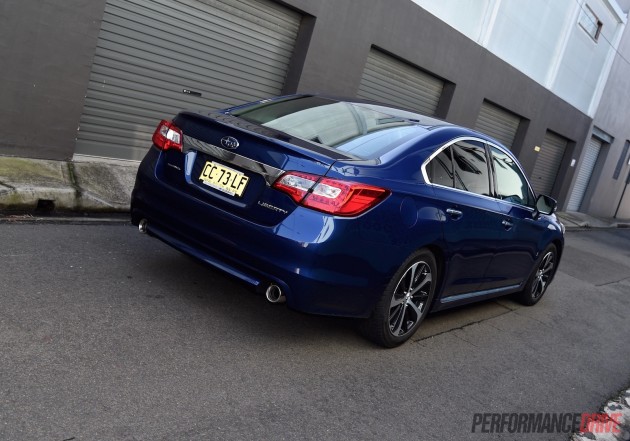 First thing first, this (in our eyes at least) is genuinely a great-looking sedan in the metal. While the side and rear profiles may look like they taken from a generic sedan mould, the new front façade with its redesigned headlamps, bold front grille and subtle bonnet lines make this an attractive offering. This is good news because Subaru has released some infamously questionable designs onto the market in recent years.

With the latest model, Subaru claims the interior has been a very important point of improvement over its predecessor. And we can testify. Stepping inside for the first time, you notice the quality feel and support of the leather seats, the clean finish of the central console, and a very uncluttered and ergonomic layout. Cars around this price point, regardless of badge, tend to feature cheaper plastic trims in parts of the cabin to melt between more exotic materials. But we admire the way Subaru has even made these cheaper parts look and feel that little bit more expensive.

The 3.6R comes packaged with interior luxuries like a panoramic sunroof, dual-zone climate control, satellite navigation, heated front seats, generous leather appointing all around the cabin including for the door sills, a high-quality reversing camera, keyless entry and start technology, and some seriously clever safety technologies that you’ll read about a bit later on. All in all, there’s not much more you could ever ask for in a car priced at around $40k. 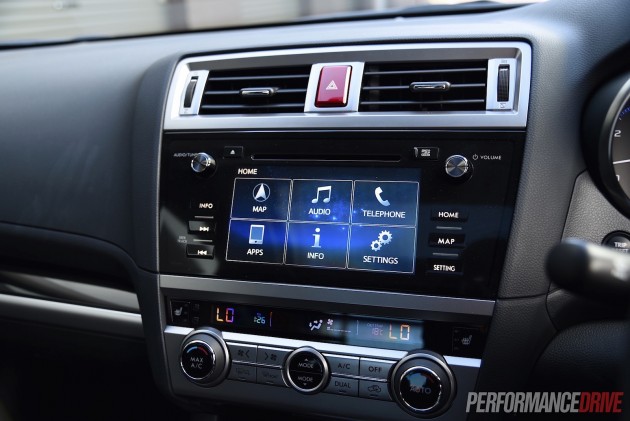 The new infotainment system blends beautifully into the central console, and has a quality gloss finish. The buttons are part of the unit itself and are touch-sensitive, adding to the luxury feel that Subaru was obviously striving for. The infotainment system itself functions well and is easy to navigate with a simple home screen layout. It may not change seamlessly between functions, presenting some delays, but it works more than adequately against the market standards. The Bluetooth connectivity pairs without fuss, and the system features the Pandora app for audio streaming. Combined with a 12-speaker Harman Kardon system you won’t feel short-changed in the audio entertainment department.

Practically speaking, the Liberty is a spacious offering that has a bigger appetite than a Sumo wrestler. It’ll eat up your family and luggage with space to spare. The boot space seems like it defies the laws of physics, delving into a black hole capacity of 493L (up 17L over the previous model). The rear seats can be folded down 60:40 split for more space.

You could fit three large adults in the rear of the car and be driving for several hours before anyone complained – which is what we did. The rear bench is comfortable and even wider than the seat in the predecessor. In the front there aren’t going to be any complaints either. It offers one of the biggest and airiest cabins in the segment.

Part of the standard features, the 3.6R comes with Subaru’s EyeSight technology, which, thanks to sensors and two cameras mounted at the top of the windscreen, monitors the road ahead for hazards and plays a massive part in Subaru’s cool adaptive cruise control system. The EyeSight system can recognise brake lights of vehicles ahead, monitor lane departure, scan the road for potential hazards like cars pulling out and even pedestrians. Not only that, the system will apply the brakes for you to avoid a collision.

In practice, the system works just as claimed. Our first attempts in an urban environment despite being a little unnerving had the system beeping away and applying the brakes when the car in front began slowing down. The most impressive aspect of this system comes into play on long-distance cruises with the clever cruise control. Flick it on, choose a speed and take your feet off the pedals until you exit the motorway. It really is that easy. The system will monitor traffic ahead and slow down, speed up or maintain its speed all by itself, which makes some tedious highway kilometers that little bit more relaxing. Our only niggle with the system is that in beautiful peak-hour M5 traffic, the system leaves too big of a gap between you and the car in front, which can prove frustrating as it acts like an invitation for people to continuously cut you off.

Subaru offers six-month or 12,500km servicing intervals. This may prove a deterrent for some buyers as running costs can be higher than say a Toyota Camry or Mazda6. Subaru does offer capped-price servicing for the lifetime of the vehicle. For piece of mind, the new Liberty and Outback models are also the safest to roll off the factory floor, with a five-star ANCAP safety rating of 35.99 out of 37. 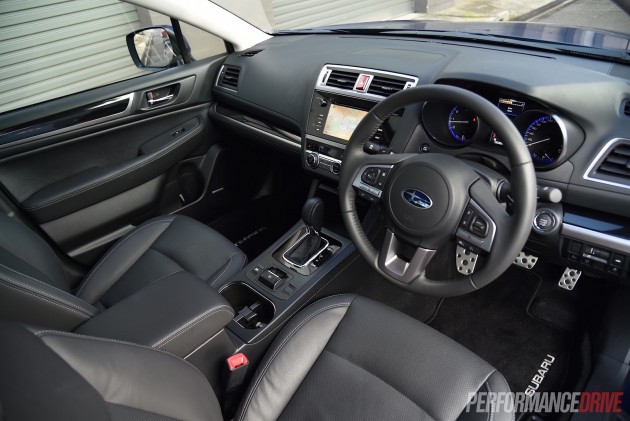 This is the perfect car to take on a long distance trip. On the highway it hums along almost silently. Subaru has done a great job with the sound insulation. There’s almost no tyre roar entering the cabin even on rough surfaces, and outside noise is kept to an absolute minimum – it fools you into thinking you’re piloting a much more pricey car bearing a European badge.

Equipped with a comfort-inclined suspension setup, there is a noticeable amount of body roll through the bends. The front end feels softly dampened when darting into a corner or under hard braking, and the rack and pinion steering system doesn’t offer the most engaging steering feel through quick switchbacks. But it is nicely balanced and it feels direct and secure through the bends. It also offers a soothingly smooth ride for sheer comfort.

Compared with the rest of the segment, the Subaru is at the more favourable end of the handling standards. The Liberty has received some advanced technology in the form of a torque-vectoring system to boost handling dynamics further away from some rivals. It can automatically apply individual wheel braking to reduce understeer in certain conditions.

Subaru’s symmetrical AWD system offers a much more competent and stable drive than its Japanese rivals too, forging through wet weather conditions without a sweat. It’s also a bonus if you intend to do some long distance trips to the snow, for example, where its competitors might struggle with their front-wheel drive setups.

The Liberty transfers power through its ‘Lineartronic’ CVT auto transmission. It offers smooth and very linear power delivery without a fuss. Subaru has calibrated the CVT to maximise the engine’s torque, however, it is still a CVT at the end of the day and is far from the most interactive gearbox. It dials up optimum parts of the rev range so the engine actually feels like it produces more torque than it does. And with no time wasted with gearshifts, the Liberty picks up and presents rapid acceleration when you put your foot down.

The 3.6-litre boxer performs particularly well with mid-range acceleration thanks to peak torque (350Nm) coming in at 4400rpm. It requires just a tickle from your right foot to effortlessly pick up the pace. The engine produces a spritely 191kW at 6000rpm. Under full acceleration we timed 0-100km/h in 7.1 seconds, which seems rather contradictory to the quietness and relaxed attitude of the cabin. This is one of the quicker sedans in the segment.

The age of the powertrain does rear its head at times in terms of economy. ADR figures state a combined cycle of 9.9L/100km, which we got absolutely nowhere near. Around the city you can expect to be permanently in the double digits. We averaged 10.4L/100km during our time with the car. 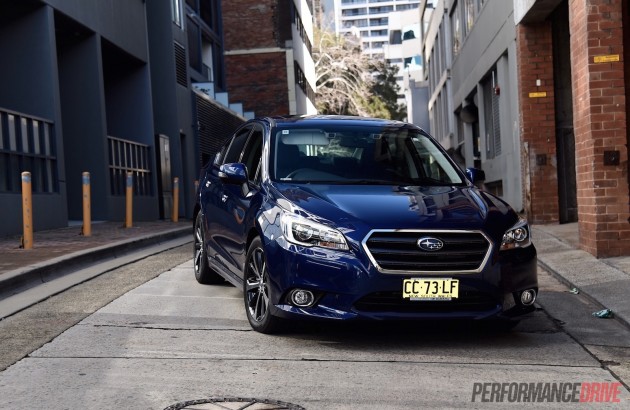 Much to the delight of Subaru, the Liberty, at least in Australia, is making a roaring comeback. With a year-to-date increase in sales of 255 per cent up to June 2015, it’s clear to see the Liberty is keen to take a bigger bite out of the market than ever before. The Liberty is close to leading the pack in the mid-sized sedan segment as it is, currently sitting in third place.

The driving dynamics, combined with an undeniably refined interior and exterior package warrant a price increase over last year’s model, yet Subaru has chopped off $14,000 from the price tag. At the risk of sounding a bit too much like a late-night infomercial, there really has never been a better time to buy a top-spec Subaru Liberty. 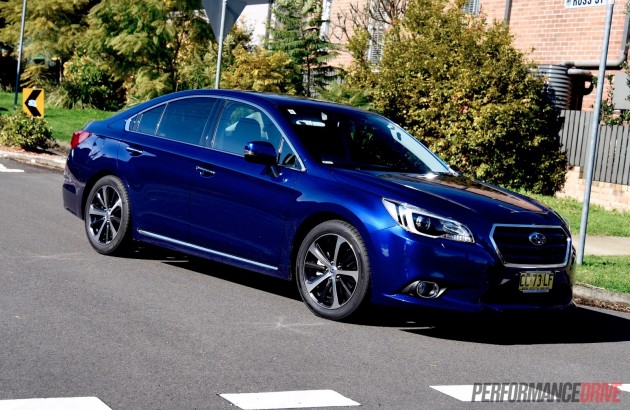