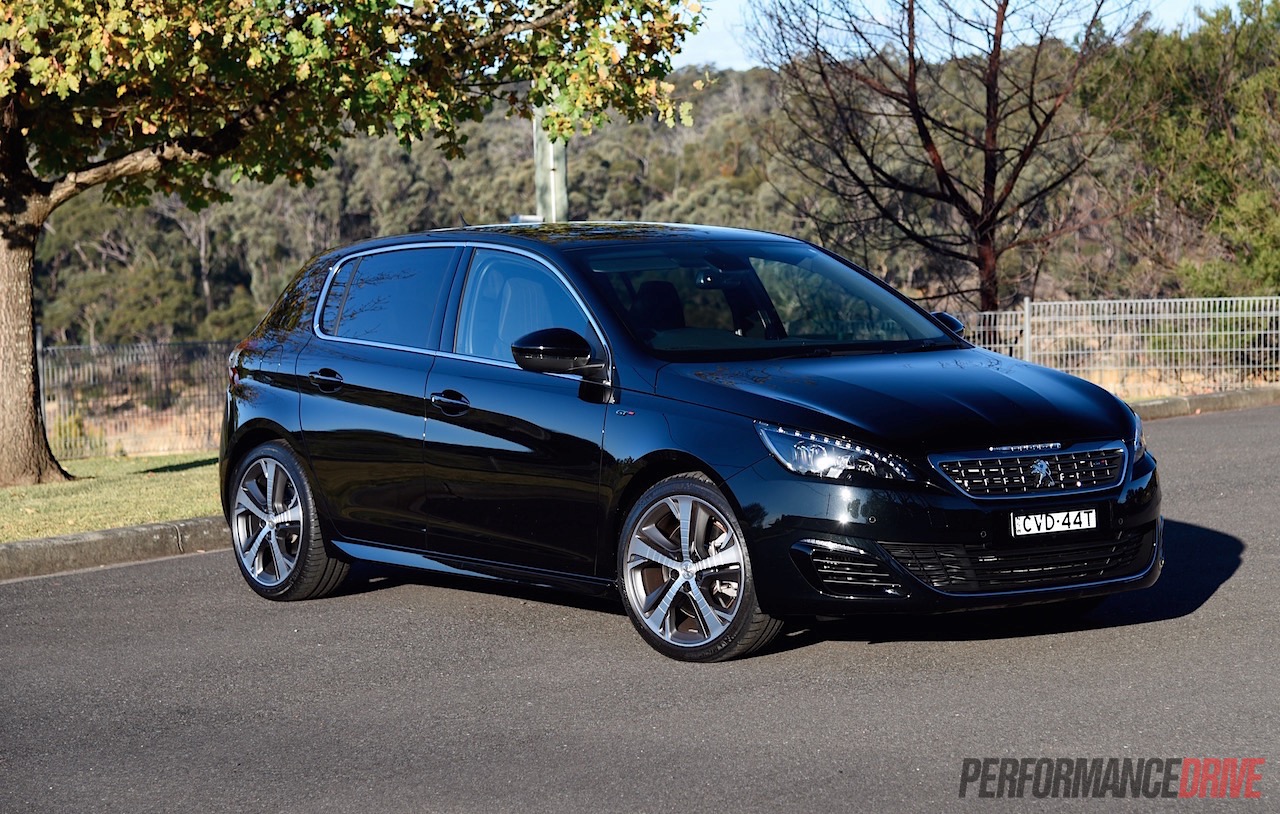 Sitting in the very competitive sub-premium small hatch segment, the 2015 Peugeot 308 GT promises sporty credentials without any of the compromises of a fully blown hot hatch. But, is it priced too close to the more athletic rivals? 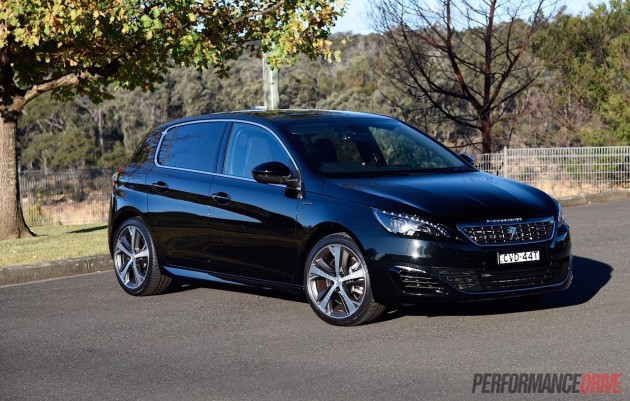 The 308 is already an established quality model in itself, having taken out the 2014 European Car of the Year award and the 2013 ‘Most Beautiful Interior’ award. The 308 has also shed more than 100kg over its predecessor, and now comes packed with more performance and even better economy.

For the time being, the 308 GT is the flagship model until the anticipated ‘GTi’ is introduced in the next 12 months. You have the choice of a 2.0-litre turbo-diesel or 1.6-litre turbocharged petrol. The former is a $1000 premium over the petrol, developing 133kW and 400Nm, sent through a six-speed automatic gearbox. Our test car is the 151kW/285Nm 1.6-litre turbo which comes with a six-speed manual only. Prices start at $41,990, which puts it right in line with most of the proper hot hatches such as the VW Golf GTI. 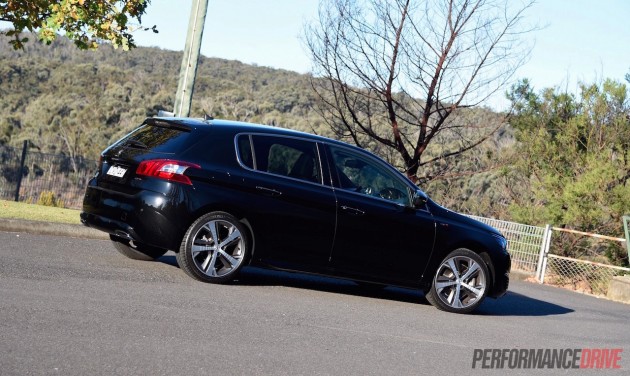 As you approach the 308 GT, there are a few clues that help distinguish this from the rest of the range. The sporty machined-face 18-inch rims, chrome embellishments around the windows and door handles, and dual chrome exhaust tips at the back all give it a boosted presence.

Opening the cockpit door you’ll notice the brushed metal Peugeot logo on the door sill, and a mostly black blend of suede and leather, contrasted with red stitching… because really, what’s a hot hatch without red stitching? The leather-covered wheel is tiny and makes you feel like like a bit of a giant at first, but it has that flat-bottom that we all love, and offers a very ergonomic and focussed driving position.

There is a classy mix of Alcantara and polyurethane leather sweeping through the cabin. This is all what Peugeot calls its ‘i-Cockpit’, and combined with the aluminium pedals and forged metal gear lever, the 308 GT is not lacking whatsoever on the sporty front.

It is an undeniably pleasant place to sit. It wouldn’t have won 2013’s most beautiful interior of the year award if it wasn’t. The materials, barring the cheap plastic on the dash and below the screen, have a quality look and feel, and are right on the money for the price. 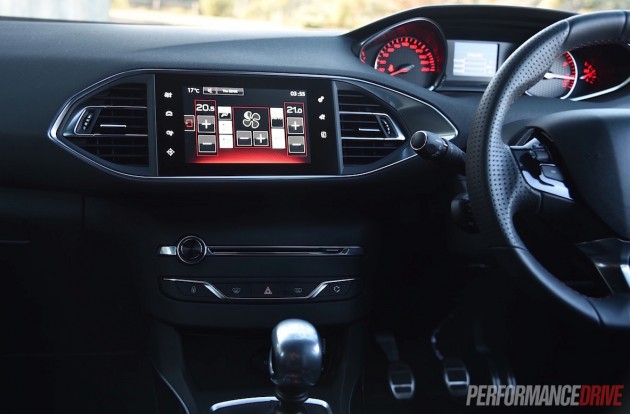 All of the instruments and controls have a solid feel and firm click about them, and seem like they would stand the test of time. This leads us on to our only major quarrel inside the 308, the infotainment system. As we’ve come to expect from French cars, they often aren’t afraid to try something completely new, and the 308 is no different. Designers have massively reduced clutter of the centre fascia by leaving only five buttons (for the demisters and hazard lights). In theory, this could have been a great idea, but having to resort to Peugeot’s touch-screen system for duties as menial as turning the a/c on and off all in the name of styling is a step in the wrong direction we think.

Peugeot’s system is slow and cumbersome too. We’re sure you’ll agree, the less time spent repeatedly pressing the screen to no avail, the better. The truth of the matter is the 308 GT is in a price bracket far above the calibre of this system, which may lead some customers feeling somewhat shortchanged.

Practicality issues pop up in the back as well. Beware if you’re in the market for one of these and have kids older than say, eight years old; the rear seat is small. Having said that, if the front passenger is willing to sacrifice some room (and their knees), you could squeeze an average-size adult in there with reasonable comfort. The rear seats are indeed comfortable though, with soft plush cushioning. The rear seats do fold down for a large cargo opening, with the regular seating position leaving an impressive 435-litre boot. 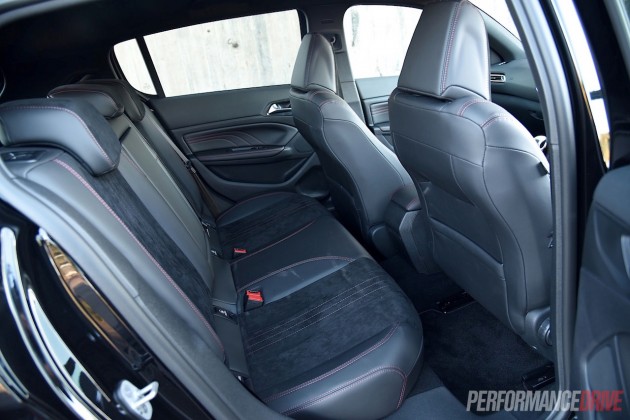 It may not bear the muscle of a fully-fledged hot hatch but we are happy to report when you put your foot down, the 308 GT will undoubtably put a smile on your face. With 151kW and 285Nm, and in a car of this proportion (1200kg), it equates to some very fun driving. It isn’t quite in the same ball-park as the Golf GTI or Focus ST when it comes to power, however, its EMP2 chassis means it is around 100kg lighter than the GTI, and more than 225kg lighter than the Ford. We timed 0-100km/h in 7.2 seconds.

There is a very enjoyable delivery of power from this engine, with some turbo-lag evident low down in the rev range. Above the 3000rpm mark, when the turbo has spooled up, the little 1.6 unit will quickly spin towards 6000rpm with some pretty serious acceleration. The torque delivery is impressively linear as well for a such small-capacity motor. Pushing the sport button sharpens up the throttle response and provides a sportier engine note in the cabin to amplify this experience. It also tweaks the steering feel.

In the bends, the 308 has copious front axle grip. It’s surprising how much throttle you can feed in on the exit of a corner without understeering wide. It really is a confidence-inspiring little hatch. Peugeot engineers have done a great job with the calibration of the chassis and suspension, allowing it to dart from corner to corner with very little body roll, and carry speed through a bend. You can really enjoy shooting through the curves, choosing your line and increasing the throttle until you start to dance on the limit. At this point, the 308 GT remains very manageable while delivering loads of feedback.

Obviously, if you keep pushing the front-end will start to shoot wide, but up until that point you’ll be pleased by its abilities. It can also handle bumps and irregularities in the road surface at speed without shattering your spine or becoming unstable. The steering, despite being electronically-assisted, has a lot of feel to it and at pace is alive and informs the driver where the tyres are and how much grip they hold.

On the flip side, when you just want to drive to work on Monday morning, blurry-eyed and mourning the weekend past, you can simply leave it in the comfort setting and glide uneventfully to work. The 308 is a really nice urban cruiser, you can really relax, activate the massage function (both front seats), and use the loads of low-down torque to stream through the gears and traffic.

Economy is not the 308 GT’s strong point, at least in real-world conditions. In our time we were unable to match the ADR figure of 5.6L/100km on a combined cycle. Our test vehicle averaged around the 8.0L/100km mark during a week of mixed conditions. 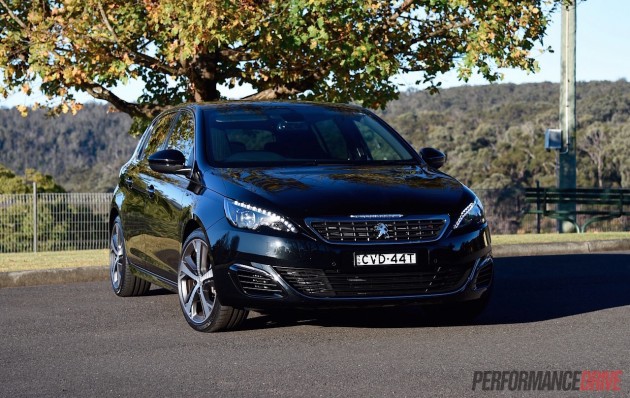 In order to stand out from the pack, spiced-up hatches like these have to hit the nail on the head when it comes to offering two distinctly different personalities. While Peugeot’s road cars in the recent past haven’t exactly been celebrated for their dynamic abilities, we’re proud to announce that the excitement is back. The 308 GT achieves that perfect blend of sports car pedigree and everyday practicality, and it does it with that certain French charm that Peugeot has become famous for.

At the switch of a button the Peugeot 308 GT changes from a very relaxed, comfortable and quiet hatch to an excitable little monster that wants to chew up the road. The 308 GT is a very capable warm hatch. Our biggest problem with it however is the price. At just over $40k, the little Pug is almost the exact same price as the Golf GTI – arguably the best all round hot hatch offering on the market. One thing is certain though, the 308 is definitely one of the most stylish-looking machines in the segment, inside and out.