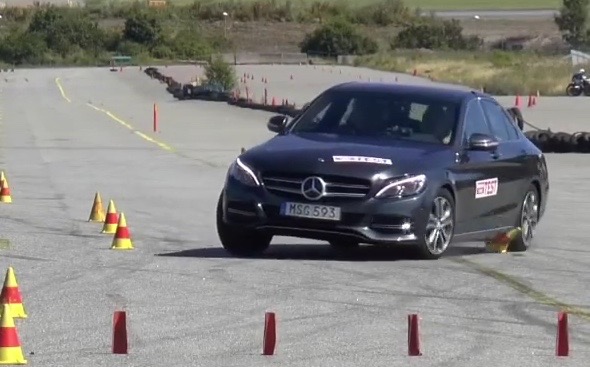 The latest Mercedes-Benz C-Class is currently the best-selling premium vehicle in the class in Australia, however, there is something you should know; it’s a potentially dangerous vehicle.

Swedish publication Teknikens Varld has put the new C-Class to the test in one of its infamous “moose tests”, which involves suddenly swerving through a serious of cones. The test is designed to replicate a possible manoeuvre one might make out on country roads to avoid a large animal.

Most modern vehicles pass this test quite easily, including humble models such as the Mazda6 and Nissan Pulsar. The team put the C-Class, a C 350e hybrid to be exact, through the chicane at 72km/h, to which it slid wildly off course.

TV then proceeded again at 67km/h. Failing that, the speed was turned down to 66km/h, and it failed again. Only at 64km/h did the C-Class show some kind of composure. It must be reiterated this is the heavier hybrid version. It would be interesting to see how the regular petrol or diesel models perform.

Mercedes-Benz has apparently tried to cover up the failure by saying the tyre pressures were too low. But as you can see in the snapshot, mid-slide – when the tyres are under the most pressure – the tyre walls don’t seem to be flexing at all like they are running a low pressure.

Obviously the “moose test” isn’t going to be relevant for everyone, with some drivers living in the city and so on, but it is still quite alarming that such a renowned product fails a simple swerve with such potentially dangerous consequences.