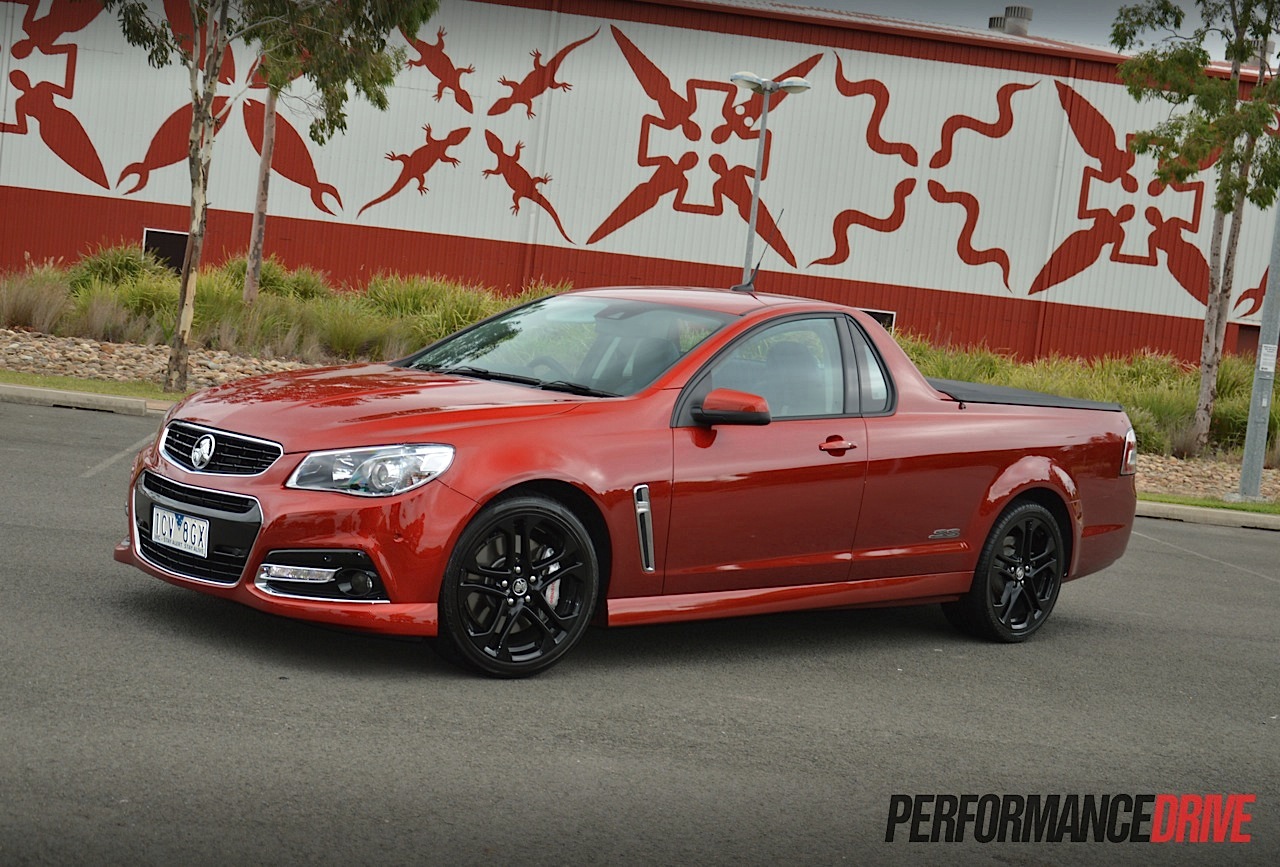 It’s Australia’s most popular locally-made workhorse, and it has just been updated for one of the last times ever. Is the 2015 Holden Ute SS V Redline a sendoff fans should be proud of? 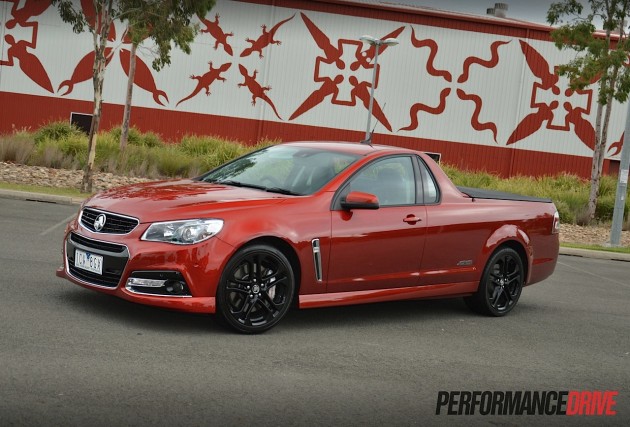 Holden announced the 2015 VF Commodore update late last year. Highlights include a recalibrated electric steering system – as the previous setup was a bit sloppy near the centre – as well as new colour options including a ‘Like It Hot Red’ and ‘Jungle Green’, and ISOFIX child seat anchorage points in the back of the sedan and Sportwagon.

Most of the big changes were to the SS V Redline. All Redline automatic models now come with paddle shifters, heightening the overall sportiness, and a range of black trimming updates for the exterior including 19-inch alloy wheels and black grilles at the front. No revisions have been made under the bonnet, leaving the 6.0-litre V8 in its usual 260kW specification (270kW for the manual).

Prices haven’t changed for the Redline, with this Ute version requiring a cheque for at least $48,990 for the manual, and $51,190 for the six-speed auto (as tested). It is quite expensive but when you compare it to top-line 4×4 utes such as the HiLux and so on, you end up with a bit of a bargain considering the level of luxury and in-car features that you get with the SS. 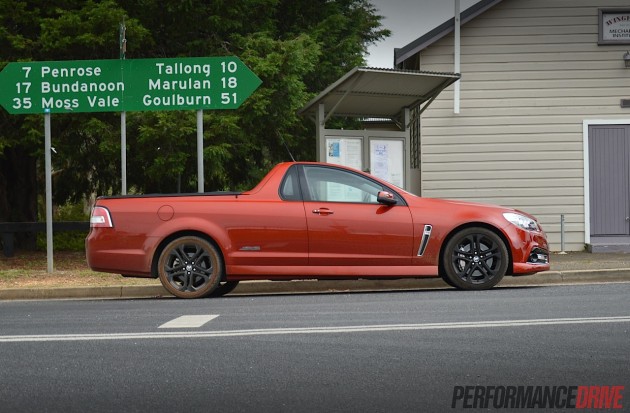 As you would expect, the SS V Ute presents a fairly cosy cabin given it only has two seats. You do have quite a bit of room for adjustment though. The seats are capable of sliding right back to the rear bulkhead and offer height adjustment, which means headroom is aplenty just like in the regular VF Commodore sedan on which it is based.

We’ve always loved big Commodore seats, and in the SS V Redline you get some properly chunky items that are among the best in the business in our opinion. There’s plenty of side support for the legs and torso, and the cushioning is soft and absorbent providing excellent long-distant comfort. They also suit a wide variety of body sizes.

Storage space is good, with a big console box in the middle, two cup holders, and a little spot for your phone in front of the gear selector. There’s also some space behind the seats with net pockets attached to the wall. Even if you’re tall and have the seat all the way back, there is room left on the floor for a gym bag or helmet.

Just like the sedan counterpart, the Redline Ute comes packed with equipment and nifty safety features. You get automatic parking (steering), a rear-view camera, blind-spot monitoring, and a cool head-up display system. Almost all of the on-board entertainment and major functions are then controlled via the MyLink touch-screen interface.

The MyLink system incorporates clever music apps, Pandora and Stitcher, and offers satellite navigation along with a multi-format six-speaker stereo. It’s not the best interface on the market but it is pretty good considering this is a workhorse. Some of the menus take repeated steps and take you down one-way streets, metaphorically, and the sat-nav maps are a little clunky.

None of this really matters though as this is a ute. It’s designed for work and play. So in the back you have a tray measuring 1900mm in length, 1200mm in width, with 500mm depth (plus 50mm for the cover lip). You can load up to 651kg worth of stuff in there (665kg manual), which means it’ll easily take a couple of dirt bikes for the weekend away. If you need more, it offers a braked towing capacity of 1600kg and comes with sway control for added peace of mind. 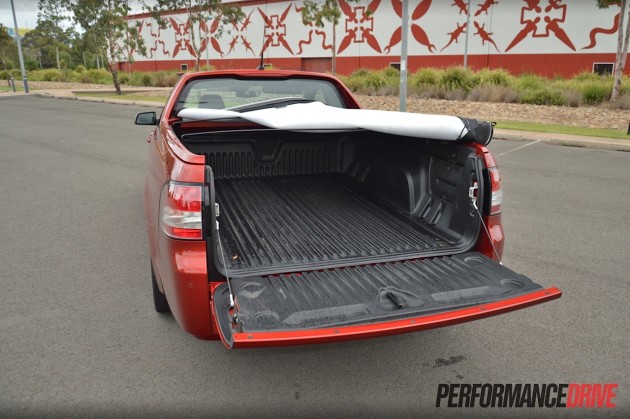 The SS ute has always been a bit of a Swiss Army knife in that it’s a reliable companion at the work site, but also a feisty dance partner when the road gets twisty. Holden has amplified this dual personality for the Redine. It comes with bespoke sports suspension, Brembo brakes, stronger axles, a limited-slip differential, and fatter tyres at the back (245 and 275). How does it all translate on the road?

On our usual winding road test route, the Redline Ute handles beautifully, and not just for a ute. The sports suspension provides just the right amount of give to soak up bumps, while the body control is tight and direct with minimal roll or lean. Steering accuracy is noticeably better with the MY2015 update too, resulting in heightened overall engagement. You point it and it’ll follow.

There’s almost no understeer at all, and even oversteer is only a problem if you really go out of your way to cause it. In fact, you’ll be surprised by how much rear end grip there actually is. It is very composed and controlled, far exceeding the limits of its archenemy, the Ford XR6 Turbo ute.

Okay, so it definitely handles the V8 power just fine. But what about the power itself? We’re a bit disappointed Holden couldn’t bump up the output just a little for the VF. With 260kW on tap, it’s actually less powerful than the same model from 2006. Fuel economy has improved though thanks to the ‘AFM’ cylinder-deactivation technology, which saps 10kW.

Engine response is great, requiring minute input to get things going. You also have the ability to make fine adjustments along the way, during small drifts for example. From a standing start we timed 0-100km/h in 5.5 seconds. It loves to rev right through the gears, however, you’ll need some space as the gears are rather long.

The old six-speed auto is the main letdown. With long gearing it can feel tired and out of breath sprinting between corners, and then shifting takes a good second to fully engage. The transmission doesn’t do well to provide rapid bursts of acceleration. Instead, it has to prepare itself for a moment before it can release the almighty torque of the V8. With a quicker-changing eight-speed auto this could be a real weapon of a car. But with the six-speed auto, it’s probably more at home on a drag strip than on a tight mountain road.

Paddle shifters are a nice touch and they do make the drive all the more exciting. Rev-matching with each downshift, and holding on to gears right until the redline if you want it to. Even so, if it were our choice we’d go with the manual. It offers punchier acceleration and better on-road response. This is partly down to a shorter final drive ratio; 2.92:1 for the auto, 3.45:1 for the manual.

Overall this is a great performance car. It’s confident and reassuring in the corners, the engine likes to sing – although a little quiet for our liking – all the way to redline, and traction is remarkable. As a pure sports car it needs a better transmission. As a workhorse that will happily take part in track days, it’s awesome. 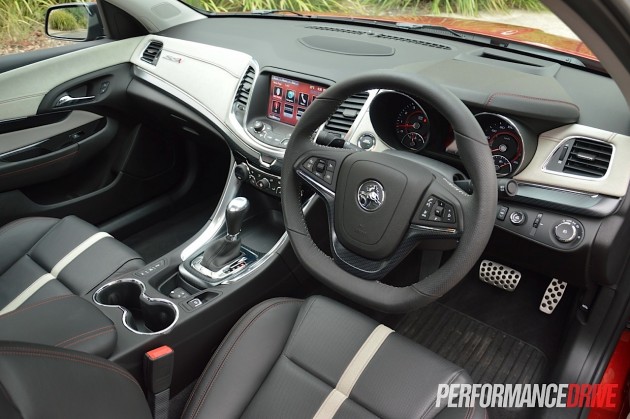 If you’re after a ute for work but love to get away on the weekends, the SS V Redline is a superb all-rounder. You get the comfort, safety and convenience of a sedan but with the practicality of a big tray in the back. Most of the parts are similar to the Commodore too which means servicing and repairs shouldn’t be too expensive. Put short, this is the most complete and most dynamic ute Holden has ever made. 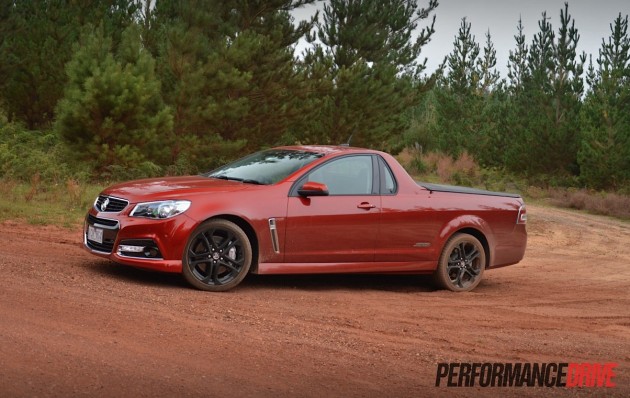