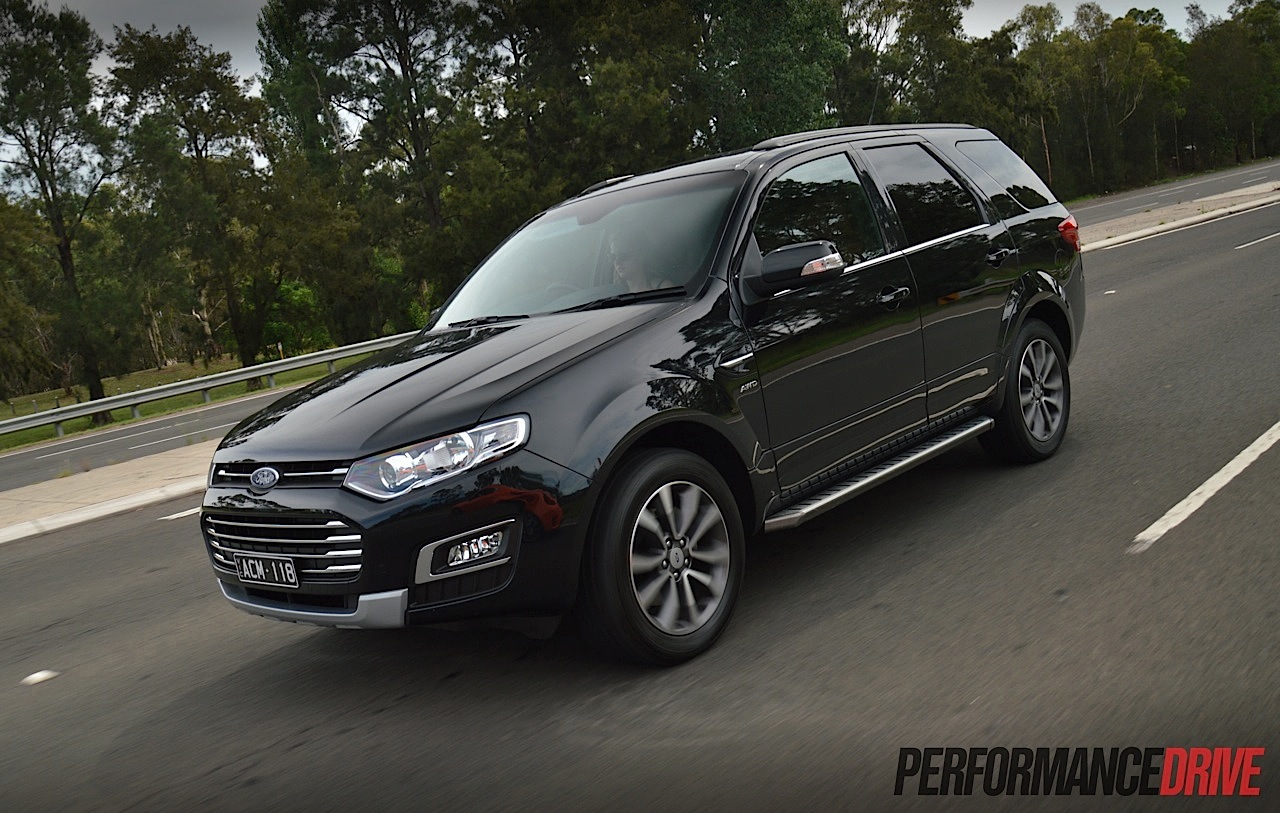 Ford Australia is at a tipping point. It’s about to flush out its ageing yet Australian vehicle range with fresh products from overseas. Unfortunately, in terms of sales, the much-anticipated FG X Falcon and 2015 Territory MkII are not shaping up to be the sendoffs that we all hoped for. Surely the top-spec MkII Territory Titanium TDCi AWD can regain some dignity for the brand? 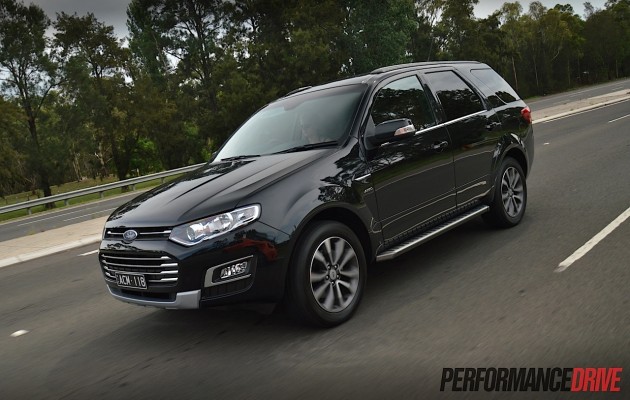 This is not a new model. We’ll just make that clear from the start. It is a ‘MkII’, or you can call it a facelifted version of the outgoing model. The benefit of the MkII manoeuvre is cheaper production costs and of course cheaper price tags at the dealer, as opposed to coming up with an all-new model.

Ford Australia has slashed prices on all Territory variants for the MkII range. The base model kicks off at $36,990 instead of the previous $39,990 starting point. TS mid-range models are an impressive $6000 cheaper than their MkI counterparts, while this top shelf Titanium TDCi diesel in AWD guise is $3250 cheaper, starting at $56,740.

Now for the downside. Ford has made a number of improvements to various components and minor technical details. But, overall, it is very similar to the outgoing model, which was already a mediocre proposition in the ever-advancing large SUV market segment. In terms of efficiency, technology, build quality, and driving performance, more modern rivals are popping up that can trump the friendly Ford, making it a tough decision to go local. 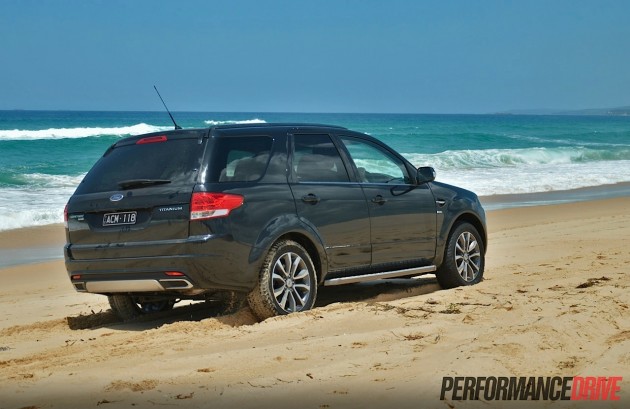 Accommodation has always been a strong point for the Falcon and Territory. And it’s the same with the MkII. Seating space is plentiful in the front and back, with lots of legroom and headroom and space to move about. There is a flip-up and slide third row which offers reasonable room for children too, although the mechanism is complicated and does require two hands to flip up or pack away.

Those who like a high and commanding driving position will warm to the Territory. You sit quite perched up, with a height adjustable seat for the driver, and good visibility all around thanks to simple pillar designs and even windows. The steering column offers limited movement, which can hamper your efforts to find that ultimate comfort zone. Most of the dash layout, which is carried over from the previous model, is unobtrusive and set away, making it feel even roomier.

New for the 2015 model is Ford’s SYNC2 touch-screen interface. It is a big improvement on the clunky, unresponsive, and graphically-flawed Human Machine Interface previously used. It’s still not the best in the segment though, or near it in fact. In our opinion the way the menus are structured and laid out aren’t clear enough and it is sometimes confusing as to what climate you’ve set or where to adjust it. We also had problems with the sat-nav telling us to turn down streets that didn’t exist and taking us around long or needlessly convoluted routes. 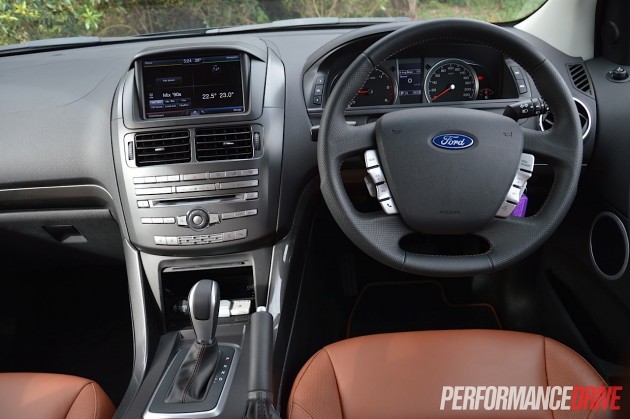 In terms of packaging, this is another one of the Ford’s strong points. When you keep in mind that price, you do get quite a lot for your money. Standout features include a flip-down DVD player and headphones for the kids, digital radio, Bluetooth, auto wipers and headlights, leather, and enough cup holders and bottle holders that you’d think it was a Tour de France support vehicle.

Safety is kept in check with seven airbags, stability and traction control, front and rear parking sensors, roll-over protection, a rear-view camera (standard on all variants), and voice recognition. ANCAP has crash tested the MkII version and awarded it five stars, but it only just gets there with a score of 32.57 out of 37 – anything lower than 32.5 is four stars. (34.61 for the FG X Falcon.)

Overall, the interior is far from class-leading. There’s some design flaws and the spread of buttons on the dash can be confusing, while most materials feel cheap and tacky. As we mentioned above, there are many vehicles on the market in this segment now that are really putting up competitive and subsequently more appealing packages. The Territory’s leading trait is the sheer cabin space. 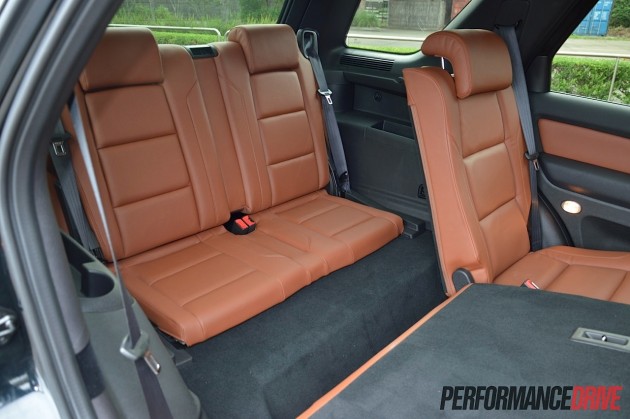 Steering the big Territory with its Falcon underpinnings is easy and light. The electric power-assisted steering is not the most engaging for this segment, but nor is it the least inviting. You get a good sense of where the wheels are on the road pretty quickly, and thanks to that driving position and visibility, nervousness is rarely felt in car parks and threading through tight city streets. It’s an easy vehicle to drive, so it’s great for families and those who are doing a lot of running around.

In terms of engine performance and economy, well, the 2.7-litre turbo-diesel is already using a walking stick (it’s from the 1990s), but now its age is really showing. There is noticeable turbo-lag compared with some rivals, resulting in slow throttle response and overtaking performance, while 0-100km/h comes up in a lazy 9.4 seconds. Part of this is down to the engine’s output curves and delivery through the old six-speed auto.

Peak power (140kW) arrives specifically at 4000rpm and peak torque (440Nm) is available right at 1900rpm. Most modern engines offer a spread of power and torque. For example, even the old-ish 3.0-litre turbo-diesel four-cylinder in the Toyota Prado rival develops 410Nm between 1600rpm and holds it until 2800rpm.

In terms of output, the 2.7 here is about average for the segment. Sitting at the top in our opinion is the excellent 3.0-litre V6 turbo-diesel in the five-seat-only Jeep Grand Cherokee. It develops 184kW and 570Nm, with an official average fuel economy of 7.5L/100km (AWD). The Ford trails far behind at 9.0L/100km, despite being less powerful.

Ford Australia has updated the ZF six-speed automatic transmission (6HP21) for the petrol models of the Territory and FG X Falcon, but unfortunately it is not equipped to the diesel variants. It retains the old 6R80 unit, so it does miss out on some of the driving and economy benefits of the updated auto. As such, consumption remains unchanged for the 2015 AWD TDCi. Interestingly, we achieved an average of 8.9L/100km during our test.

Off the bitumen the Territory only just performs adequately for a sub-SUV/crossover. We took this example onto the dunes in Newcastle for a quick test on the sand. With the stability and traction control switched off (as advised by 4×4 experts), the all-wheel drive system handled the boggy conditions… most of the time. The class-trailling 175mm ground clearance is its main hindrance – the smaller Kuga offers 184mm – and the open centre differential presents excessive slip. It would be more at home on loose gravel or in snowy conditions. 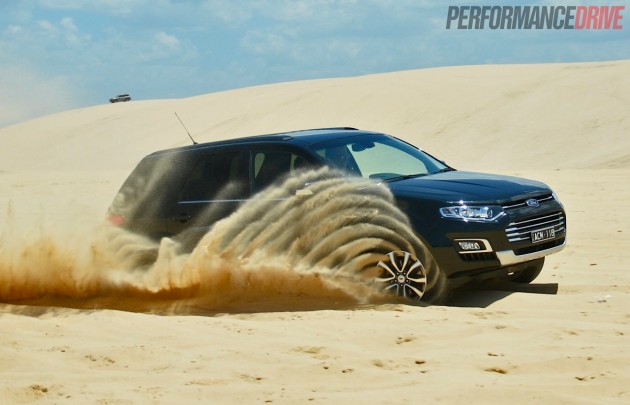 The Territory is no longer good enough to fend off the competition in our opinion, as much as we hate to say it. There’s just so many other offerings that are superior in this space. Some rivals might fail in a particular area but they make up for it in another area. Aside from the copious cabin space, the Territory doesn’t excel in any particular area.

In saying that, the Territory should be proud. The nameplate has had a hard life, but it has definitely left a plaque-worthy legacy behind it. It’s just a shame auto manufacturing is no longer financially viable in this country. If the local arm had more money to play with we’re sure it could come up with a cracker of a new Territory, like it did when it introduced the original model back in 2004.

CONS:
– Engine lacks tractability and performance
– Ageing interior design
– Class-trailling off-road ability
– Misguiding SYNC2 sat-nav (on a number of occasions for us)
– All feels a bit tired and old 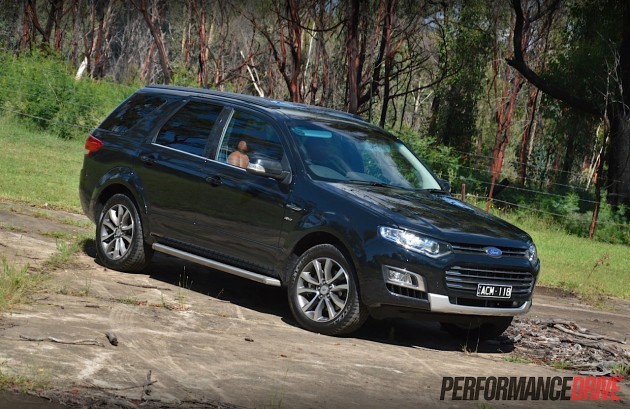