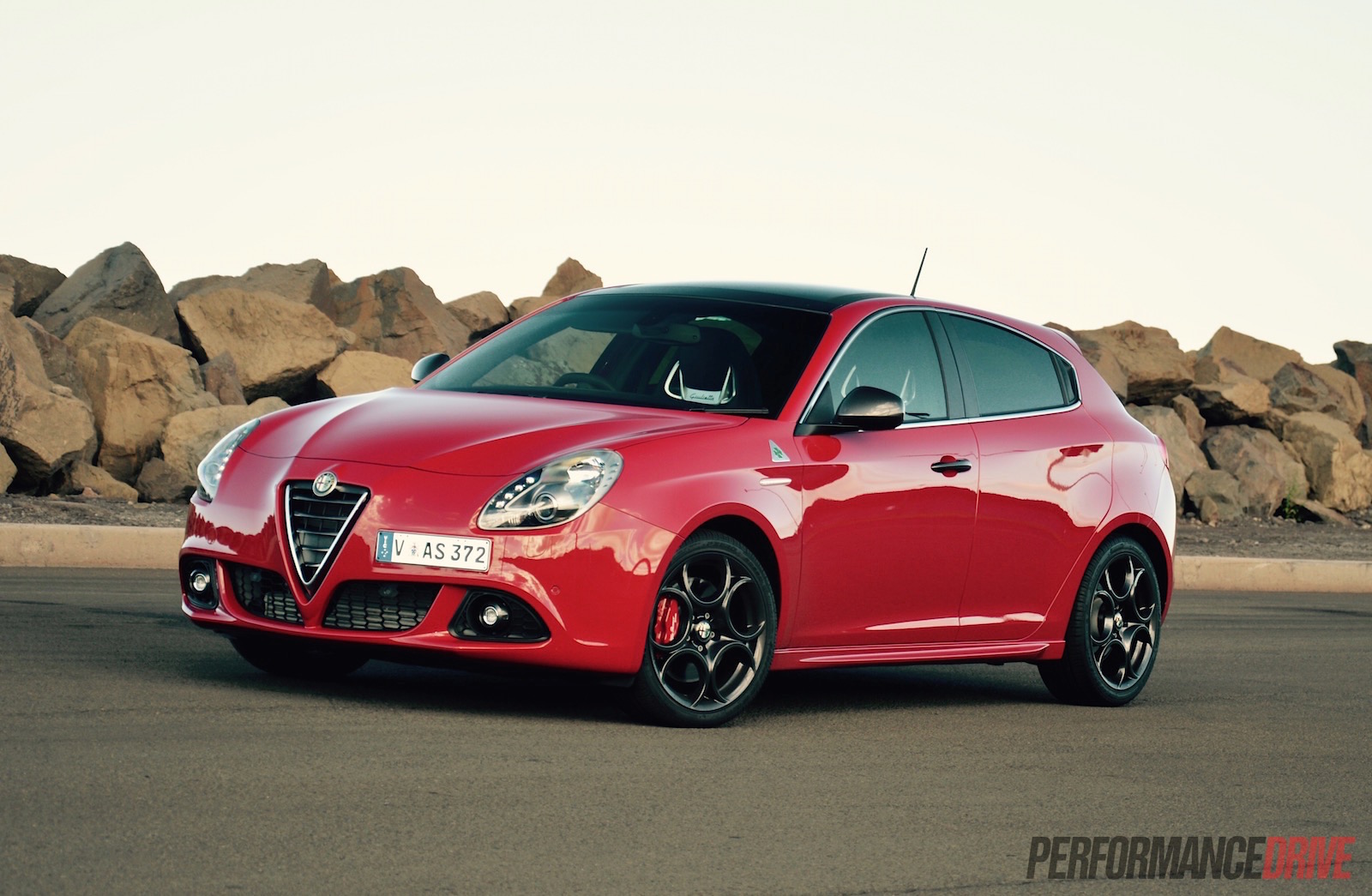 Are you after a hot hatch that not only packs potent performance but also style and flamboyance? The 2015 Alfa Romeo Giulietta Quadrifoglio Verde (QV) is out to offer exactly that. 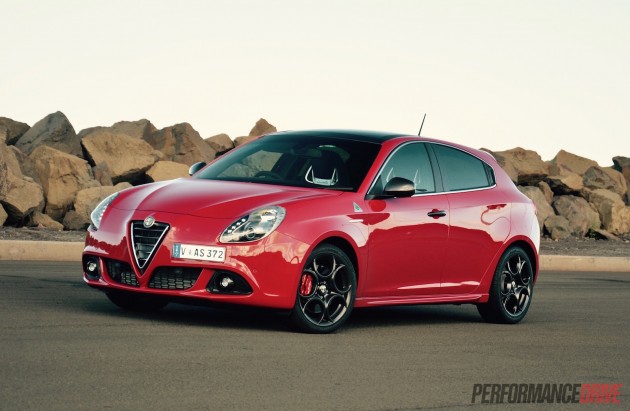 Most hot hatches on the market today concentrate on cutting down lap times, hitting high g-forces in the corners and escaping from apexes with as little fuss and commotion as mechanically possible. The Giulietta QV can do that, but it’s not really that fussed. It’s more sophisticated. It’s got better things to do, such as looking good.

The new QV coincides with the MY2015 Giulietta update. It retains the 1.75-litre boosted four-cylinder, producing 173kW of power with the six-speed manual, and 177kW with the dual-clutch TCT auto (as tested). Both develop 340Nm at just 1900rpm, sending urgency through a front-wheel drive system.

Prices start at $39,000 for the manual and $42,000 for the TCT auto (excluding on-roads). This places it neatly in the hot hatch segment, against similarly priced rivals such as the Ford Focus ST and Volkswagen Golf GTI. 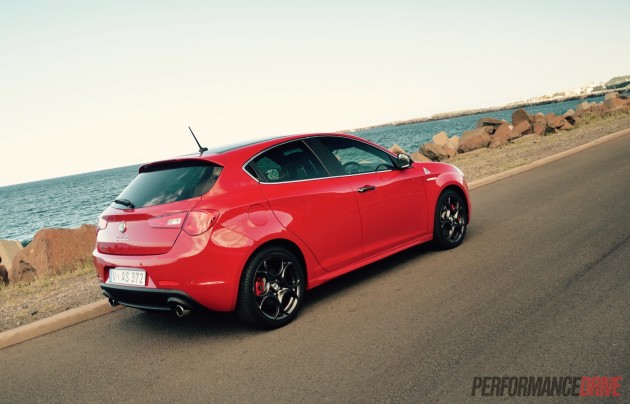 So, following that theme, the Giulietta QV gets four-piston Brembo brakes with 320mm discs on the front, unique 18-inch alloy wheels, a big exhaust, lowered sports suspension, and of course the iconic four-leaf clover emblem stamped onto the front guards.

Inside, front passengers get some sporty Alcantara-trimmed seats with leather sections. We like the way Alfa has gone for partial leather as sometimes full leather seats can look a bit boring and they don’t breathe well on hot days, especially if you’re into a bit of spirited driving. They are quite comfortable and suitable for long journeys, but they do lack side support for a proper hot hatch.

In the back there’s a matching bench with sporty contours and Alcantara sections for the outer positions. Despite looking like a big puffy cushion, the rear bench is actually on the firm side. Legroom and headroom is decent for this segment considering most rivals use big chunky sports seats in the front that take up lots of space.

Alfa Romeo has finally ditched the old and fussy multimedia system and gone for a new 6.5-inch Uconnect touch-screen interface. We get the fact Alfa always likes to do things a bit differently, but the old system was too far behind. The new system offers big clear in-screen menu buttons, crisp graphics, sat-nav, voice recognition and full connectivity with music streaming capability.

Overall, the Giulietta’s cabin has a certain amount of theatre to it. Everything has been designed to spark emotion and creativity. It also looks nice too, with contrasting stitching around the leather bits, a sporty albeit large three-spoke steering wheel, and a good mix of materials and tones.

Cabin quality has been improving over the years with the Italian brand, but it’s not yet at the benchmark level, particularly if you jump straight out of a Volkswagen Golf GTI. Boot space is also on the less-than-average side, rated at 350 litres. 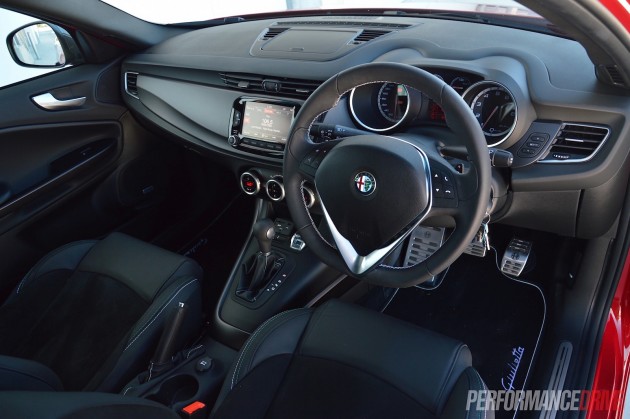 On paper the 1.75-litre turbo engine is about average in terms of output, but it offers more in the way that it delivers its output. Up to 80 per cent of the maximum torque (340Nm) is available from just 1800rpm, and it holds on until 4000rpm. Peak power is reached at a fairly low 5750rpm.

It loves to rev. From first gear you can nail the throttle and it will reel in gear after gear with no hesitation once you’re up and running. Turbo-lag is evident and can easily be found if you go looking for it, despite the engine featuring a scavenging control system. Provided you keep the engine and, perhaps more importantly, the TCT transmission in its happy zone, you won’t be disappointed. It really flies.

This brings us to the auto transmission. It’s a dry twin-clutch unit. Dual-clutch transmissions have received their fair share of criticism in recent times, and the one here is probably open to the most. It does roll back and delay when going from reverse to drive, and when you’re creeping in very slow traffic. However, once you’re up and running, out in mountains, the gearbox comes alive.

Upchanges are virtually immediate, and downchanges are accompanied by a swift throttle blip to match the revs. It gets on with the job when you demand it and stay on top of it. Alfa quotes a 0-100km/h time of 6.0 seconds with the TCT and 6.8 seconds with the manual. So, straight away you can see it is the quicker option. You just might have to get used to the delays at slow speeds.

If you go for the dual-clutch option, you get to have fun with the launch control function. We tried it and enjoyed it a number of times, resulting in a best 0-100km/h time of 6.1 seconds. The TCT version also comes with a unique fuel intake system called ‘QV Intake Engine Sound’ which enhances the throaty engine note. Take a listen in our video below.

In terms of handling, the standard Giulietta is a fun little package. It’s eager to turn in, showing off its inability to understeer. In fact, if you turn in sharp enough and with enough vigour, you’ll experience a brief bout of oversteer. For the QV this trait remains only the thresholds are much, much higher. The sports suspension keeps the wheels firmly planted on the ground, and we mean firmly; it is a stiff setup. Alfa offers its DNA driving modes which alter the throttle sensitivity and steering weight, but there are no damper modes to choose from.

If you love sporty driving, the taut suspension won’t be a problem but more a partner in crime. The Giulietta QV corners very flat and remains committed to the apex until you’re happy to leave it. There is some torque-steer to contend with under full throttle, but that adds to the excitement. Add to this the excellent hydraulic steering, superb Brembo brakes, and that barking engine note and you have yourself a capable and fantastically enjoyable hot hatch. 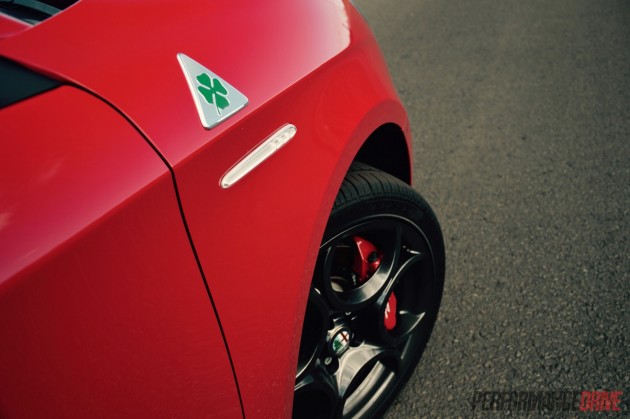 Okay, so it is not as practical as some rivals such as the Golf GTI, and it doesn’t feel as quick as the Ford Focus ST, but it makes up for that with super-engaging handling and a flamboyant, sexy design inside and out. The QV is surprisingly economical too, sipping just 7.0L/100km on the official average (7.6L/100km in the manual) – we averaged around 8.4L/100km during our week in mixed conditions.

PROS:
– Lively Italian design, inside and out
– Flamboyant engine; sound and performance
– Most engaging steering in the segment
– Uconnect touch-screen interface
– Economy 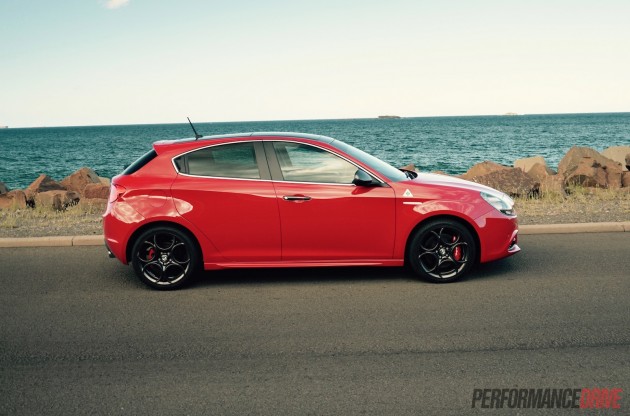