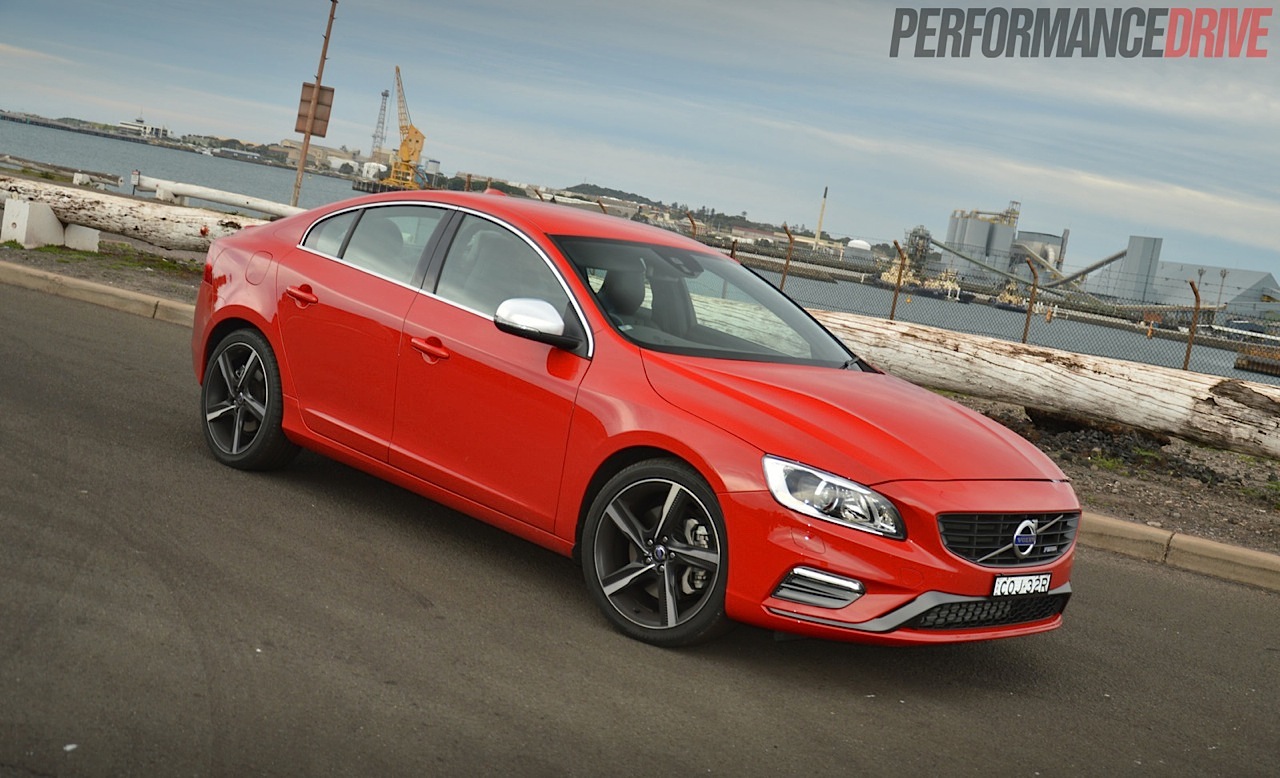 When it comes to subtle, understated performance, there aren’t many cars on the market that pull it off as well as the 2014 Volvo S60 T6 R-Design. Don’t be mistaken by its smart Swedish looks. Underneath, this is a turbo all-wheel drive powerhouse. 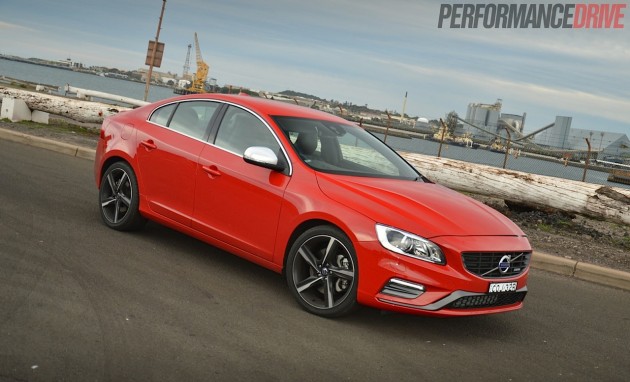 The S60 has been around now since 2007. Volvo has given the 2014 model a facelift to freshen things up. You can spot the updates pretty easily, with the main change being the singe headlights design and relocated LEDs.

All T6 R-Design models now come with the Polestar tune as standard. This was previously an option but Volvo now gives the top model all that it’s got. This means the 3.0-litre turbocharged inline six produces 242kW and 480Nm (up from 224kW and 440Nm). Despite the boost, the official average fuel economy is the same; 10.2L/100km.

In other areas, the T6 R-Design gets the ‘Sport’ chassis and lowered sports suspension, a six-speed automatic transmission, and a neat bodykit with a rear diffuser, 18-inch alloy wheels, and a sports interior.

Let’s start with that interior. These R-Design seats are awesome. Proper bolsters swell right out from the sides to hug you in, with partial leather covering all. They’re soft, too, so it doesn’t matter what size frame you are the seats will support you and take to your shape.

For the driver the seating position is great. You can lower the seat right down if you wish and the steering wheel, although a little chunky for our liking, is presented perfectly at your chest. 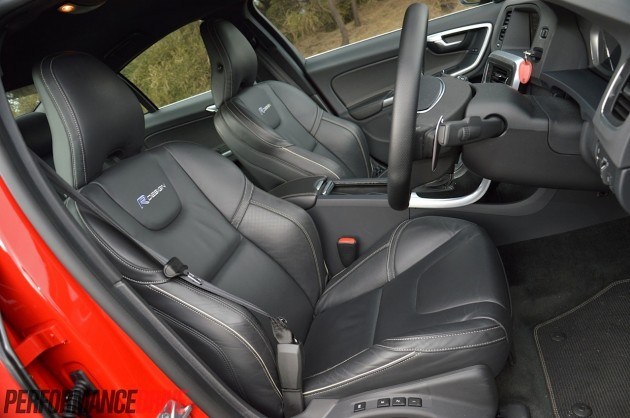 The rear seats are similarly themed with good legroom for this segment. Headroom is slightly sacrificed due to the swooping roofline. It’s not terrible but if you are planning on taking taller passengers regularly it could become an issue for them.

Volvo has cleverly incorporated climate control vents into the B-pillars for the rear passengers, instead of placing vents in the usual spot in the back of the centre console. This does seem to free up some space for the centre seat passenger. 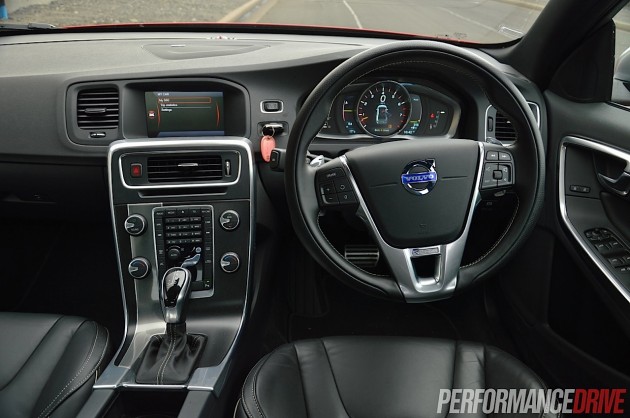 In terms of gadgets and controls, the Volvo’s dash is the easiest to live with out of all the rival offerings. It’s the nicest on the eye as well, with cool tones, minimal buttons, and creative patterns and designs for various aspects. Volvo calls it a ‘floating’ dash fascia because if you peak around the back you’ll notice it is open and comes with a handy little hide-away shelf sized for a wallet or phone.

It might not look like there are many gadgets inside, but there is. It’s all rolled into the 7.0-inch screen. The top-right rotary knob is used to control the menus within the interface. It’s a bit clunky to use as the knob doubles as the radio tuning control and plays a few different roles. It doesn’t take long to get used to though.

In terms of safety, you can opt for a number of high-tech driving aids, such as high-speed adaptive cruise control with automatic avoidance braking, but the standard spec comprises of low-speed crash avoidance ‘City Safety’, a rear-view camera, eight airbags, and of course five-star ANCAP safety. 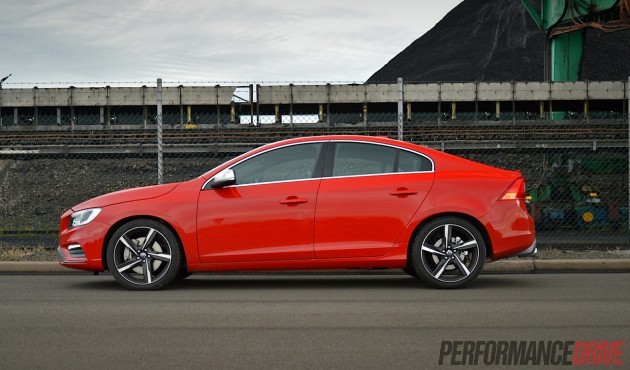 We timed 0-100km/h in 5.7 seconds, which is not blistering but it is extremely quick for a stately and relatively conservative sedan. There’s no noticeable turbo-lag from the engine, and with 480Nm available from just 3000rpm, low-end pick-up is significant enough to push you right back into your seat with mere strokes of throttle depression.

Flatten the throttle off the mark and the S60 T6 swiftly jumps off the line with little hesitation and no traction loss. Even after ‘stalling’ the engine up on the brake pedal to build revs (and boost pressure), with traction and stability turned off, the Haldex all-wheel drive system is bulletproof. And it works behind the scenes, in that, you don’t notice the torque distribution transitions or the endless calculations going on. It’s like it already knows what’s best and what wheels have the most traction.

Around the corners the S60 is flat and mostly neutral. Grip is, as mentioned, stupendous. You can pull high g-forces when railing around sweepers, and it slingshots out of smaller turns with utter composure.

If you push too hard and dive into the corners too fast it will understeer a little, understandably, and if you keep on the gas pedal to pivot the car around it will eventually understeer as well.

There’s virtually no chance of producing oversteer unless you do something out of the ordinary, like throw the weight around in a ‘Scandinavian flick’ fashion. But even then, the slide is immediately put to rest and normal control is regained the moment you jump onto the power. This is thanks to the quick-thinking driveline brains.

In normal driving conditions the S60 T6 behaves like a smooth luxury car. The suspension isn’t bone-jarring, the steering is light and the engine doesn’t require delicate handling. It makes for an excellent everyday car suitable for all motorists, experienced or not. 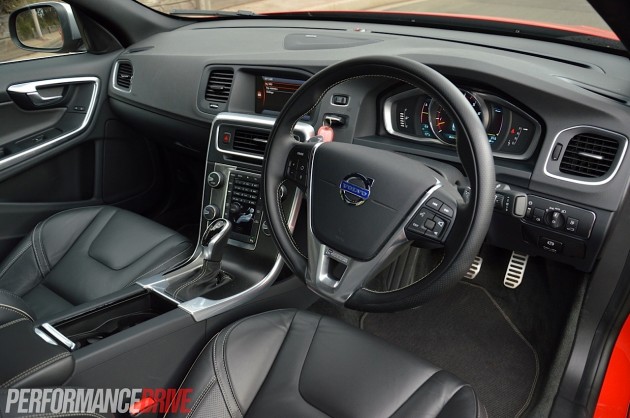 About the only aspect that we think lets down the performance potential of this svelte and powerful package is the six-speed auto. The 2014 model gets paddle shifters, however, there is no rev-matching on the downshifts and the transmission will inevitably change up when it wants to, and only changes down when the revs are good and ready.

Acceleration up through the gears is also watered down by the comparatively slow transmission, which upshifts just like a regular, modern, torque-converter automatic.

There is nothing specifically wrong with it, we simply think the engine and all-wheel drive combo deserves something more sophisticated. We also have no doubt the car would be quicker overall with a dual-clutch unit, for example, or simply a more advanced auto.

The Volvo S60 T6 R-Design is for the buyer that doesn’t want to scream and shout about the fact they have bought a performance sedan. It’s subtle and discreet, with an attractively cool demeanor. Yet, if you push the right buttons it will show an aggressive attitude, keeping up with and even surpassing some of its more established rivals.