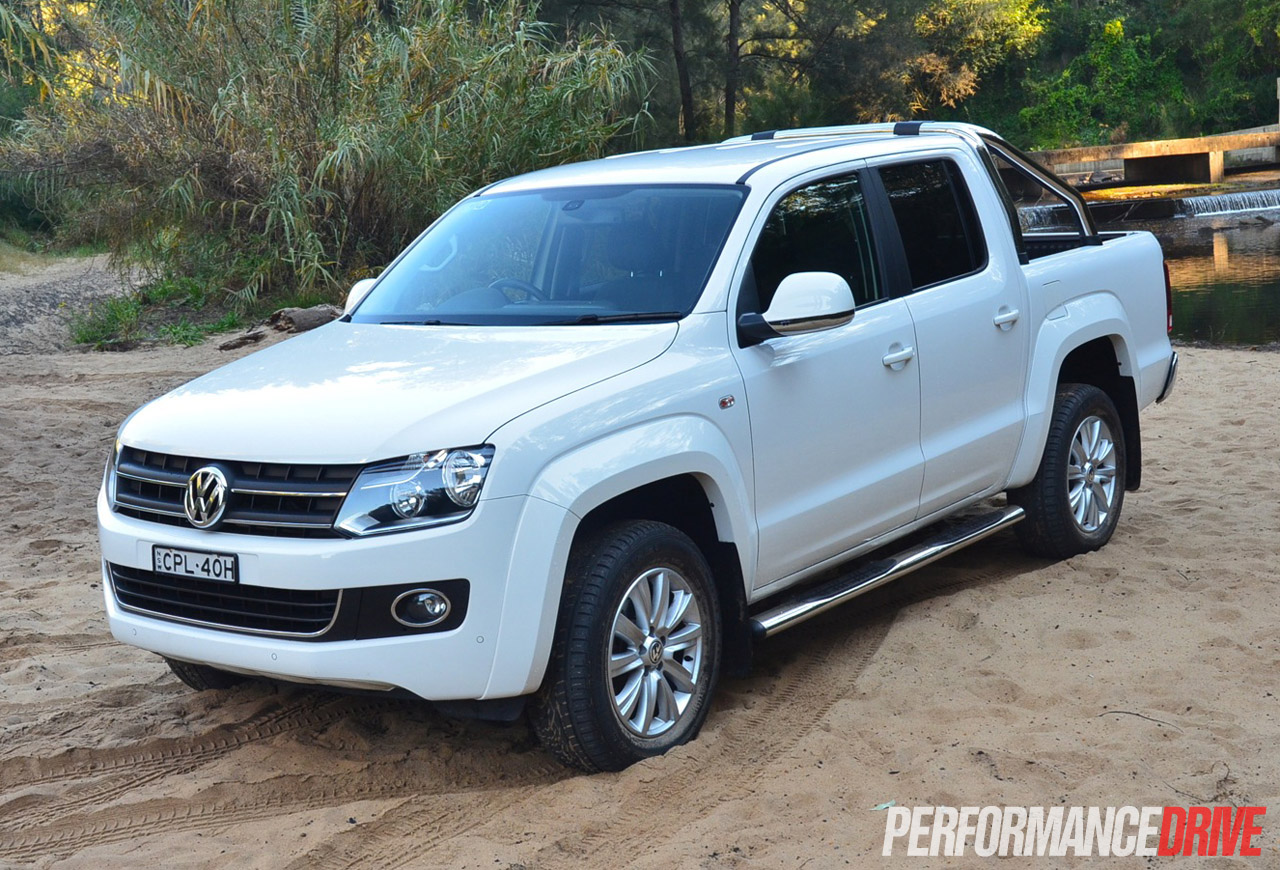 Standing alone in the ute segment as the only offering from Europe, the 2014 Volkswagen Amarok has plenty of competition to answer to – namely from Japanese manufacturers. Now available with an eight-speed automatic after it was launched as a manual-only model in 2011, the 4×4 ute has opened itself up to a new audience. 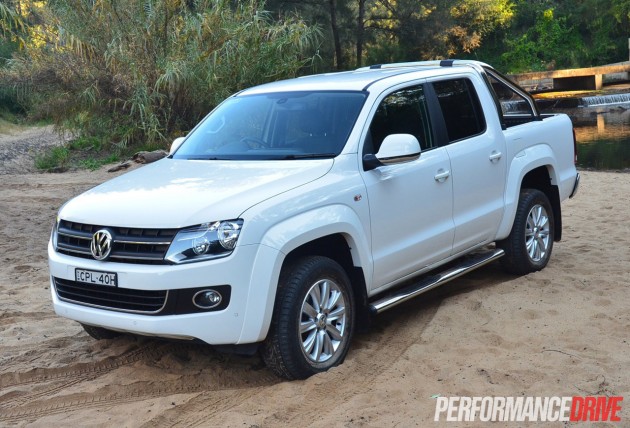 The Volkswagen Amarok range starts from $24,490 and tops out at $62,990. Much like the most popular ute in Australia, the Toyota HiLux, the Amarok is available in two- and four-door cab-chassis and body-back guise – 26 models in total. All four-door variants come in both rear-wheel drive and 4×4, with automatic only available on 4×4 four-doors. Under the bonnet of all models is a 2.0-litre turbo-diesel four-cylinder that ranges in output from 118kW/300Nm to 132kW/420Nm. 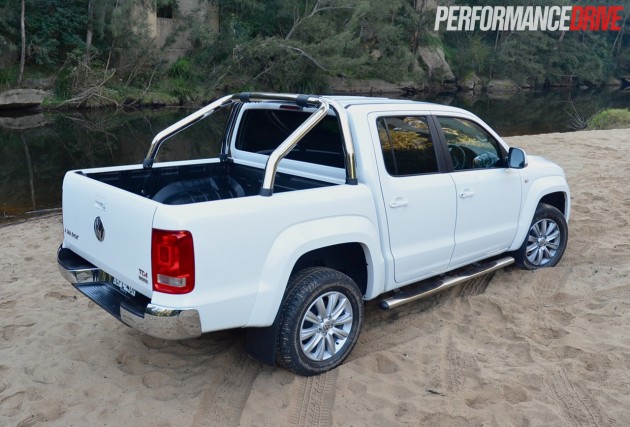 Jumping into the Volkswagen you’re greeted with a smart trim that’s reminiscent of the rest of the Volkswagen family, albeit slightly more ready for wear and tear, with high-quality materials that are nice to touch and look at throughout. The driver and passenger seats offer decent lateral and lumbar support, with more than enough shoulder space and legroom up front. Jump in the back and you’ll notice the seat is comfortable and nicely-raked enough to settle in for a long trip – it doesn’t feel like an afterthought like the rear of so many other utes.

Styling-wise the Amarok is one of the most visually imposing 4×4 utes on the road purely because of the amount of flat sheet metal. As you can see, its proportions are very box-like. The bold wheel arches are about the only feature that break up the otherwise plain design. The front end resembles Volkswagen’s current design language, perhaps leaving some onlookers to think you’re in a jacked-up Golf. Don’t park it in an IKEA loading zone, a delivery truck might mistake it for a large storage unit – especially if it’s Candy White like this test car.

One thing that the exterior lacks in our opinion is character, but perhaps this is part of its appeal – the ‘less is more’ trend. The Highline model does add some fancy yet useful exterior elements, such as a polished stainless steel sports bar, chrome bumpers, and side steps.

Now, in terms of available space, the four-door Amarok’s 1.55m by 1.62m tray is the largest in its class. It features a payload of 969kg, with enough internal space between the wheel arches to swallow a pallet, whole. The sides of the tray are also quite high, allowing for deep storage. Inside the tray there are several tie down points that feel up to the task of connecting up a motorbike, or two, or even holding your pallet-load nice and sturdy. 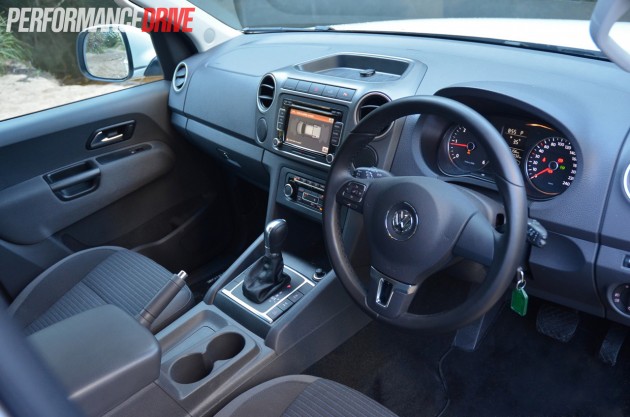 Plummeting down the road in the Amarok is very different to a lot of its competition. The large Volkswagen ute remains quiet and composed, driving more like a family car than a commercial truck. In our opinion it’s the best 4×4 truck on sale as far as on-road manners go. There’s very little bobbling over pot holes and rough surfaces even when the tray is empty.

The steering is also one of the nicest units to shuffle about. There’s minimal play given the decent amount of suspension height and tyre size, leaving you to steer its nose with ease and precision that’s not normally associated with 4×4 utes.

The 4Motion constant all-wheel drive system means you’ve got maximum traction at all times. Some users might not like the fact you can’t disengage the front axles to save fuel, however, as a result you get a no fuss setup that’s ready for all weather situations all the time. Driving the Amarok on a wet slippery night left us with nothing but praise for the constant 4×4 system. Whereas some unloaded 4×4 utes with limited-slip differentials would be inclined to push the rear around (like on wet pavers, or dodgy back roads), the Amarok grips and goes without a fuss.

You’ll hear (and see) some people make funny noises about the Amarok only possessing a 2.0-litre twin-turbo diesel four-cylinder, while the rest of the market uses larger units and even more cylinders in some case. Power for the Amarok is rated at 132kW and 420Nm (20Nm more than the manual variant).

Whether it’s around the city or out on the open road, the Amarok 420TDI pulls just fine, with every bit of its 420Nm available from a lowly 1750rpm. The available power works brilliantly with the ZF-sourced eight-speed, which intuitively hunts between cogs to make sure delivery is smooth and always ready to go. We timed 0-100km/h in 9.5 seconds, which is pretty quick considering its kerb weight is 2080kg.

The introduction of the eight-speed automatic in the Amarok sees low-range gearing ditched. This is down to running a very low first gear, negating the need for anything lower. And it isn’t something that sounds good on paper just to help you deal with the fact it does without; when you’re clambering through the bush at low speed we found that we didn’t lust for anything lower – by pressing the off-road button you can make sure it stays locked in first gear.

With the help of a rear diff lock the Amarok becomes a very capable climber, only being let down by its more road-friendly tyres. The downhill decent control also works well to help keep things in check, helping you to impress your mates with your feet-off pedal action. General bush tracks and rural roads won’t bother the German ute, if that’s what you’re weighing up in your quest for the ultimate 4×4 dual cab.

The Amarok features a 28-degree approach angle, a 23.6-degree departure angle, and a 21.4-degree breakover angle. What this means is the front end is nice and short, making it easier to climb up rough terrain, however, the poor rear departure angle means you’ll have to be careful you don’t rip the bumper bar off – or the tow bar if you have one fitted.

As you’ll see in the video below, the Amarok pulls up without a fuss if an emergency arises. Brake pedal feel is also very good, making it easy for the driver to make small, finer movements possible, which is especially helpful in off-road situations. We also found the ABS to work well on loose surfaces, and not becoming overly-cautious like some of its competition. 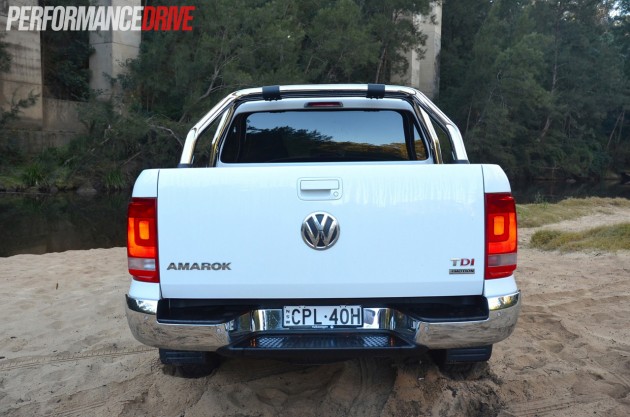 Given that the Amarok performs well in so many areas, it’s scary to think that this is only the German carmaker’s first crack at producing a ute. Right out of the box it’s as good if not better than most of the competition at most things. Before you go for one of the better-selling utes, such as the Toyota HiLux and Ford Ranger, have a drive of an Amarok so you know exactly what is available, then go from there.

PROS:
– Best on-road manners in class
– Pallet-sized tray
– Interior fit and finish
– Modern
– Gutsy power delivery
– One of the most economical in the class 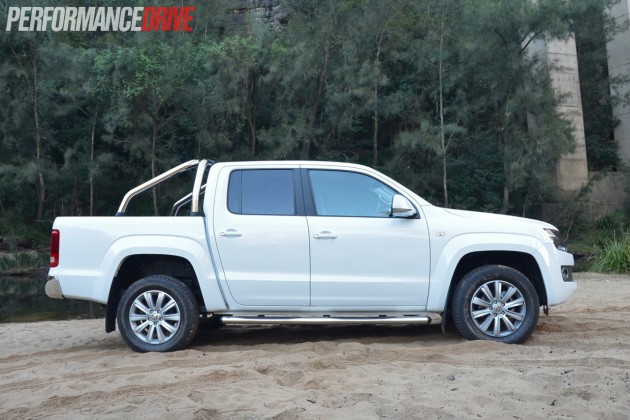