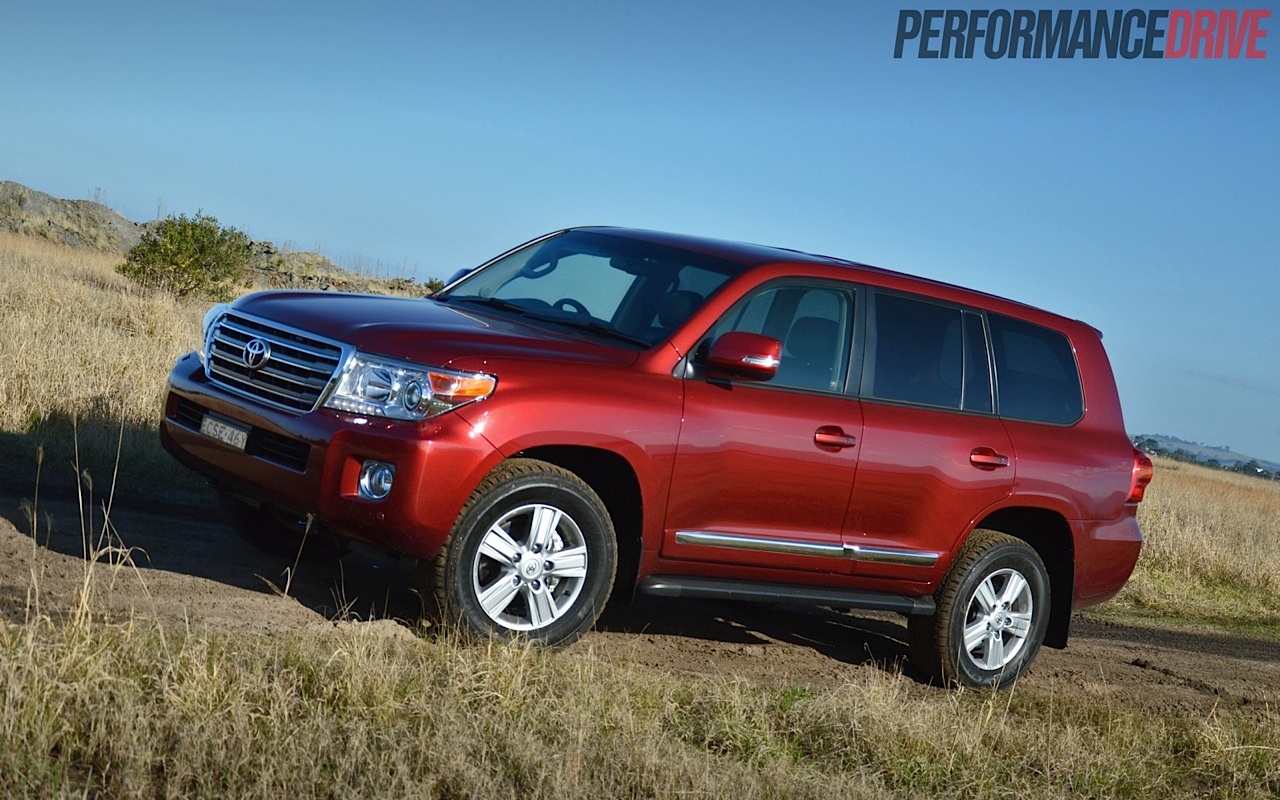 Welcome to the noble spirited 2014 Toyota LandCruiser Sahara. This is the biggest, most powerful, and most expensive SUV Toyota currently offers in Australia. When it comes to sheer size, space, and serious off-road breadth, this is known as the king. 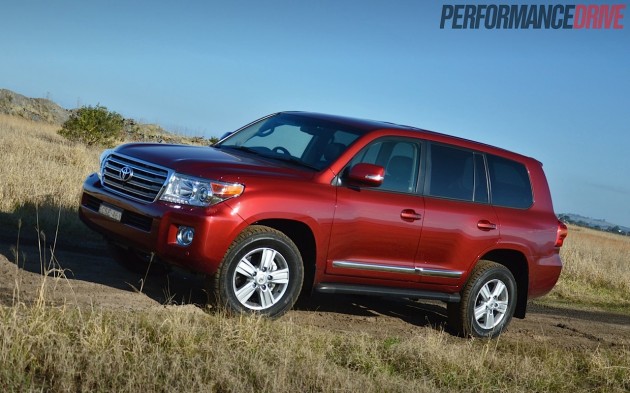 The J200, or the ‘200 Series’ as it’s more commonly known, has been around now since 2008. You could say it is in need of an update; it still uses live-axle rear suspension, most of the interior is carried over from 2008, and the engine certainly isn’t the most high-tech or fuel efficient out there (anymore).

Even so, buyers love this mammoth 4×4. It comfortably betters its only main rival, the Nissan Patrol, in terms of sales. Toyota has sold 7595 of these so far this year (as of October VFACTS), which is not only more than the Patrol (1713), it’s actually more than double the amount of Toyota 86s the company has sold (3607) during the same period. In other words, this is a very important vehicle for the local market and one that is cherished by thousands. 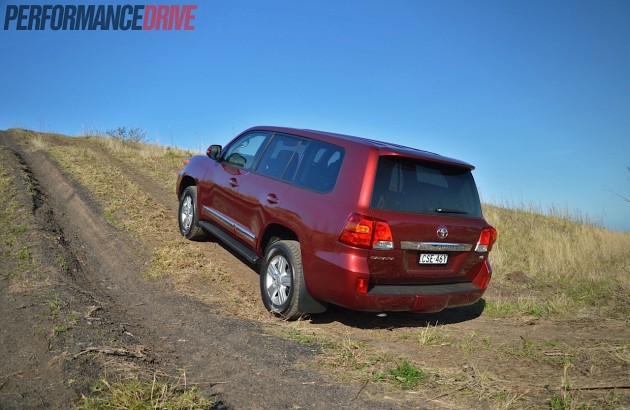 Americans love massive cars. If you’ve never really understood why, take a seat up in the LandCruiser (and we mean ‘up’). When you experience its enormity once, every other car feels claustrophobic, like you’re sitting in a dog kennel. Not only do you feel like royalty up on a throne of a chair in the LandCruiser, the elegance and opulent surroundings of the Sahara cabin convinces you that you are actually the king (or queen) of the road.

Accommodation is excellent. It’s a lounge room. Headroom is not an issue in the front or rear, and legroom is so vast in the middle bench it actually made us smile uncontrollably. The third row bench seat is one of roomiest in the segment as well thanks to a slightly lowered floor allowing your legs and feet to drop down a bit. In most other seven-seat SUVs the floor is flat, which means, unless you’re under four foot tall, your knees inevitably end up in your eyes.

It is luxurious? Well, you’ve got heating and cooling functions for the front seats to pamper you while you iron out the roads (and traffic, seemingly) in front of you. You’ve also got a humongous centre console armrest which literally has a fridge inside it, and a touch-screen multimedia display sitting what feels like a metre away with sat-nav, digital radio and a nine-speaker stereo at your disposal.

Some of the switchgear is starting to age, particularly when you take a look at some of the futuristic and slightly psychedelic dash designs coming out in other modern SUVs. Here, most of the features are accessed via big buttons that spell out their functions, for instance, which is unusual compared with today’s iPad-generation cars. We kind of like this back-to-basics layout though. It’s very simple to use. If you want the music on, there’s a big button that says ‘audio’ – just hit that. 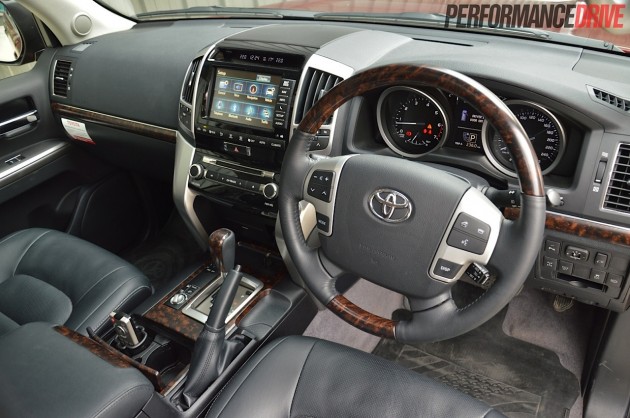 There’s some tacky wood trimming around parts of the dash and centre console that try to make it feel more luxurious, but you tend not to care. It’s a bit like when you see an extremely rich person walking along in a pair of scuffed-up joggers. You get the feeling it doesn’t care about materialistic idiosyncrasies or egotistic status; it has a purpose in life more than just looking pretty and standing out among tough rivals.

Which brings us to the LandCruiser’s purpose; this is primarily an off-road vehicle. You’ve heard the expression ‘they don’t make them like they used to’? This is the ‘like they used to’. There’s a proper rail chassis underneath with live-axle suspension (independent for the front), limited-slip differentials and a locking centre diff. Ground clearance is 220mm, and all of the important bits are protected by thick plates, such as the transfer case, fuel tank and engine. Maximum approach angle is pretty good at 30 degrees, but the departure angle is a bit disappointing at 20 degrees.

Despite the not-so-good departure angle, you can check on your progress when out in the bush through three externally mounted cameras that show you the side rails and views from the front corners of the bumper bar. There’s a conventional rear-view camera as well to ensure maximum vision and safety when reversing.

You might think the big Toyota offers exceptional safety purely due to its size. Surprisingly, the LandCruiser scores a lower ANCAP rating than a Fiat 500. In recent tests the LandCruiser received a score of 33.09 out of 37 while the tiny Fiat 500 has been scored 34.91. Both results surpass five stars, nonetheless.

In the very back the ‘Cruiser offers 1276 litres of cargo space with two rows of seats up. It’s massive. There’s no need to worry about 12-volt adapters or power converters here either as the Sahara comes with a normal three-prong power socket in the back which you can use to plug in accessories like a small fridge or various device chargers. 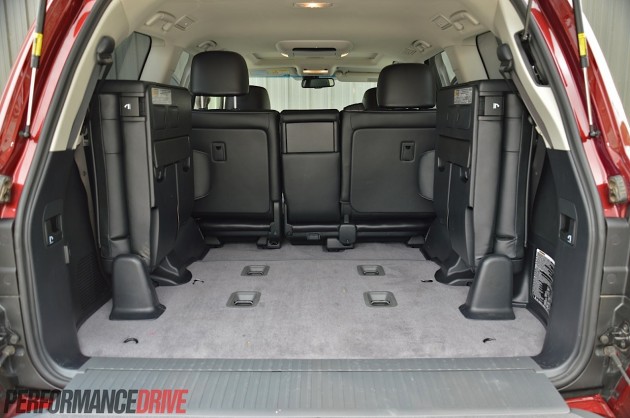 On the road the LandCruiser behaves majestically, especially with its prominent size and heavy-duty rear suspension. The steering is communicative and it turns in with decent composure. Body roll is evident – not helped by the big 285/60 tyres – but it doesn’t influence its direction or cornering grip. If you’re in a rush it will turn in with surprising enthusiasm and it holds its line with honest conviction. Obviously, it does prefer to trundle along the highway rather than carve up a tight winding road.

Speaking of the highway, this is one effortless piece of machinery. You can soak up thousands of kilometres and not become fatigued or uncomfortable. Part of this is down to the purring 4.6-litre naturally aspirated V8, producing 227kW and 439Nm. It’s a lovely engine. It revs quickly, feels responsive and it’s happy to either wind out or use its lower down torque to get things done. However, in the almost 2.7-tonne LandCruiser it can feel a bit underpowered if you really give it some.

For every other style of driving the engine and smooth six-speed automatic pull the big beast up to speed without complaint and in reasonable time. It’s one of those vehicles that will record an impressive 0-80km/h time, but that last little bit is where it shows its weight. We timed 0-100km/h in 9.0 seconds.

Off the road we can’t express how reassuring and confident this vehicle is. You can immediately tell it is designed for off road as soon as you roll off the tarmac. Those big tyres turn into comfort pillows during corrugated surfaces, and they stretch and flex around smaller objects. During our test we drove through some deep tracks that would normally stop a lesser 4×4. Progression just seems utterly relentless in the LandCruiser no matter where you take it. In fact, if we were planning an around-Australia trip this is the vehicle we’d choose, only in diesel guise.

About the only criticism to the drive we can find is the fact the body-coloured front bumper wraps right down and around to the underbody, leaving it vulnerable to scratches. The petrol V8 is also very thirsty, returning an official average consumption of 13.6L/100km – we averaged 17.5L/100km. 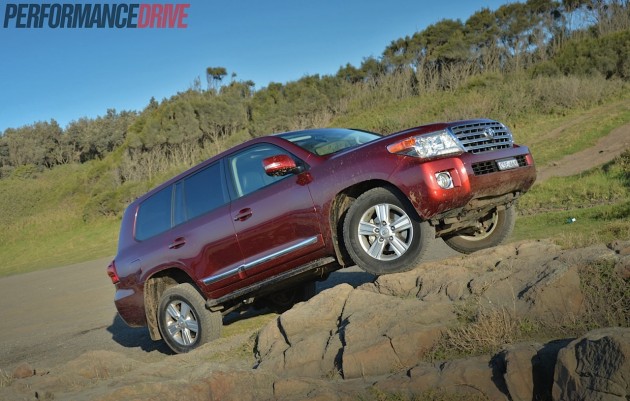 At near enough to $115,000, the LandCruiser Sahara V8 is competing with some high-end stuff, including large SUVs from Audi, BMW, and Mercedes-Benz. There’s no doubt the LandCruiser is a bit behind when it comes to pure off-road luxury and efficiency. It’s also not as dynamic on the road as the similarly priced German offerings.

However, if you’re serious about going off road and you are concerned about reliability and after-sales parts and service costs, the LandCruiser Sahara is proudly the king. It offers an almost ridiculous level of off-road prowess and capability for such a large luxury package, yet it’s built by the most trusted car brand in the world (statistically). Long live the king. We can’t wait to see what Toyota comes up with next for the ‘Cruiser heritage.