Is this the new 2014 Toyota Corolla sedan? An image has apparently been scanned from a Japanese brochure revealing the sporty-looking sedan version, which, predictably, borrows much of its design from the new Corolla hatch. 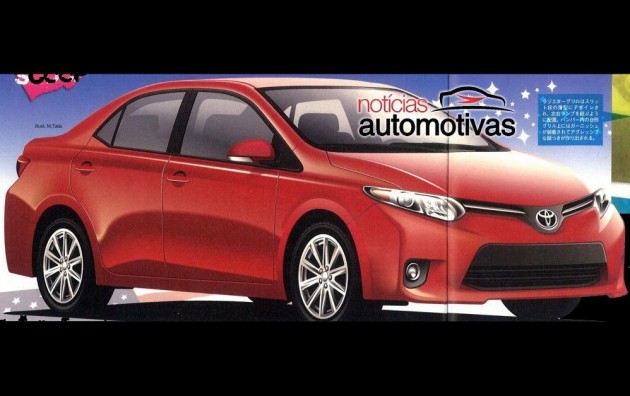 The new hatch has only been on sale in Australia for few months, while the current sedan version, which features the previous styling, will be around for some time yet before a new sedan comes along.

This image shows what could very well be that new sedan. As you can see the car features a sharp new front end, like the hatch, although there are some details that are exclusive to the sedan – if this image turns out to be credible enough to judge by.

There’s the pointy slab-like front corners, also seen on the latest Camry, a lower chin spoiler, as well as curvy new doors and prominent wheel arches front and rear. A slimmer set of headlights, compared with the current sedan model, lead out to a long panel line that glides back to the taillights.

Engine specifications are expected to be carried over from the hatch, comprising of a single-tune 1.8-litre naturally aspirated four-cylinder producing 103kW and 173Nm. Power might be bumped up one or two kilowatts for the new sedan, like the current model.

The sedan is set to go on sale in some markets later in the year. An Australian introduction isn’t expected until late-2013/early-2014.