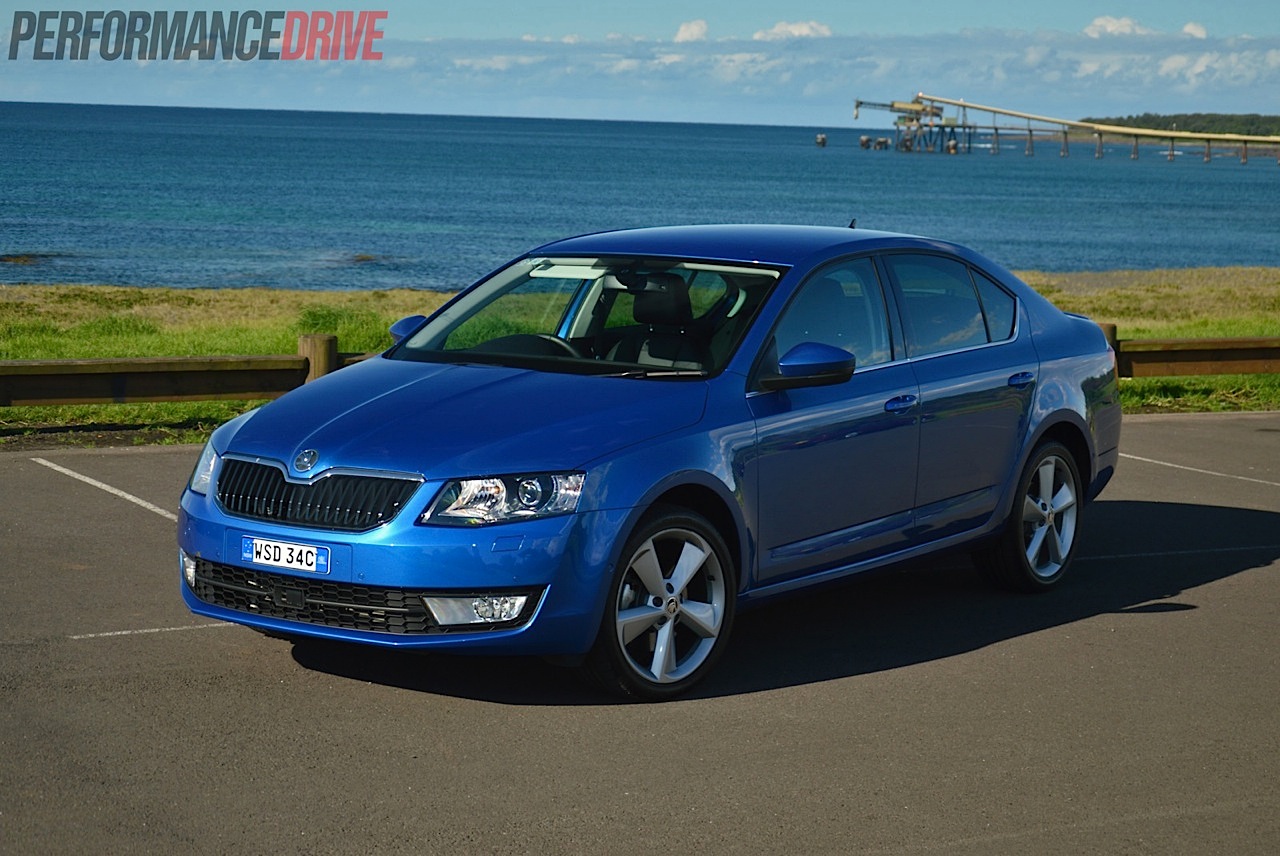 If you’re in the market for a quality mid-size sedan, you need to have a look at this. It’s the new Skoda Octavia Elegance 132TSI. Underneath, it’s a Mk7 VW Golf. On top, it’s a smart five-door sedan with all the luxury and technology you’d expect from a Volkswagen Group product. 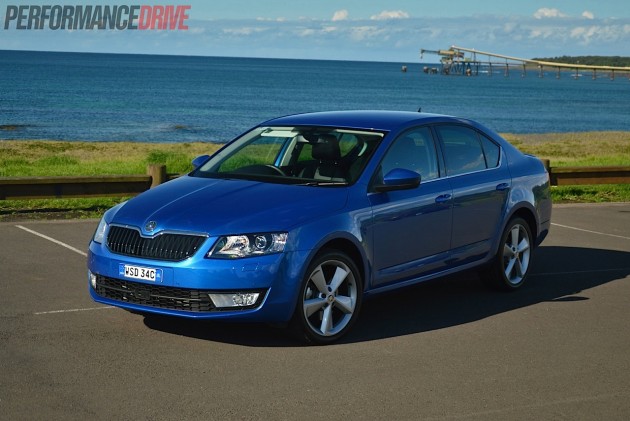 The Octavia has long since been bullied as the ‘poor man’s Golf’, as it has almost always been underpinned by the previous-gen Golf platform of the time. Not anymore. This latest model is based on Volkswagen Group’s freshly developed MQB platform shared with the very latest Audi A3 and the new Golf.

Being based on the MQB platform means this model is all new and not an extension of the predecessor.

It took a thousand engineers at Volkswagen and thousands more engineers at the suppliers to come up with the MQB. Translating from the German words Modularer Querbaukasten, which means modular transverse matrix, the layout is more of a production strategy than a physical structure.

Cleverly, the MQB is expandable and adaptable to a range of components, with the core engineering values kept the same across the board. Think of it as like a giant chassis made from Lego, and anything extra can simply be ‘clipped’ on or expanded without Audi or Volkswagen or Skoda needing to drastically re-engineer anything.

Skoda is still a relatively new brand in Australia and it remains as the cheaper alternative of the Volkswagen Group brands. As such, prices for this high-end 132TSI Elegance start at $34,690. 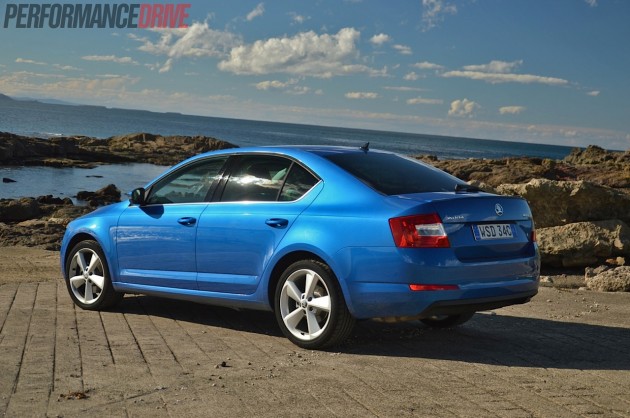 You might not consider this as a pure luxury car but it is quite luxurious inside. The Elegance is at the top end of the range, just behind the performance-oriented RS, which means it comes with a heap of standard equipment and certainly all of the latest features offered from Skoda.

Front-seat passengers are treated to a set of power adjustable leather chairs that offer good lateral support for the waist and a flat leg section for comfort and practicality. In the back is a cushy leather bench seat with its own flip-down, cupholder-equipped armrest.

The cabin is spacious and airy, and accommodates four adults in relaxing comfort. Fitting three across the rear bench makes it a bit tighter, but, unlike some of the more expensive rear-wheel drive vehicles in this segment, the transmission/exhaust pipe tunnel isn’t intrusive on centre-seat legroom.

Luxury nicknacks and novelties include a cooled glovebox, dual-zone climate control with a humidity sensor and pollen filter, ‘puddle lamps’ in the door mirrors to light up the ground near the doors, and various storage pockets and places to put your phone and keys. There’s even a special dock for your iPod for when its connected up to the infotainment unit.

Speaking of which, the multimedia interface operates through a very cool eight-inch touch-screen. We say very cool because it’s the same unit as seen in the latest Volkswagens. It has sensors called proximity sensors which can detect a hand moving closer to the screen and light up various buttons and options in advance. 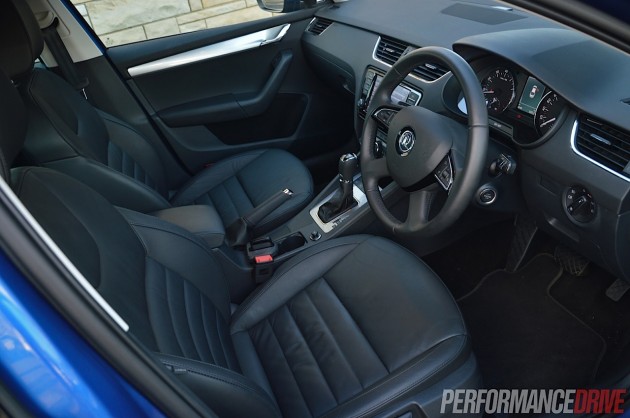 On the outside it’s similarly themed to the interior; suave yet modest. 18-inch alloy wheels and a neat little lip spoiler on the boot lid give it some sporty appeal. It does come with daytime running lights, but it misses out on the more trendy LEDs that some of its rivals get.

Overall dimensions have increased from the predecessor. It’s 90mm longer and 45mm wider, while the wheelbase is stretched 108mm. These changes provide more kneeroom and 16mm more headroom in the back, according to Skoda.

Despite the growth, the new model is around 100kg lighter weight than the predecessor. This not only means better performance and handling, the fuel economy is also improved by up to 19 per cent. More on that further down.

In the very back, the sedan offers of huge 568 litres of cargo capacity. Volume is only 20 litres short of the wagon version, and with the very effective hatch design it means you don’t have to bend over and stretch in like you’re digging a burrow to reach things at the back. The space is more useable compared with a convention sedan boot. 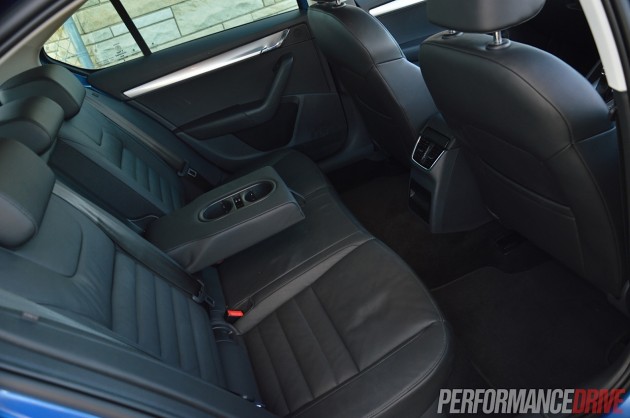 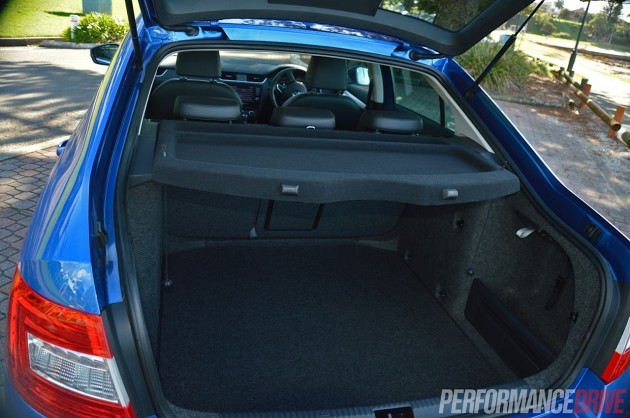 On first impressions, you notice a distinct solid feel to the car and its firm connection to the road. This is the first sign that reminds you of its Volkswagen underpinnings. The steering is an electric power assisted system with a medium weight setting and a gentle spring-back to centre. Despite being a longer wheelbase version of the MQB platform, the excellent dynamics and underbody geometry is retained.

Around corners the body is neutral and flat, and it behaves like an executive sedan should. It’s not too aggressive or too wallowy. If you push it a bit harder and give it the beans you can feel the automatic electronic differential lock sorting things out to serve up maximum traction. There’s no inside wheelspin wasting away the power. Some body roll comes into play when driving vigorously.

Like many new model vehicles on the market these days, the Skoda gives the driver the choice of various driving modes. These modes are presets for the steering, transmission and throttle response mapping. In Sport mode, for instance, the steering is at its firmest and the transmission holds onto gears before auto upshifting.

We found the normal mode to be the best compromise. In Sport mode the transmission takes far too long to upshift, and in Eco mode the car is noticeably sluggish and slow to respond.

Fortunately, the driver can use the Individual mode and preset each variable. For example, you might like the well-weighted steering of Sport mode but not the high-revving nature of the transmission setting. With Individual you can pick and choose your favourite settings. This is a handy feature we think and one that’s not usually offered with these driver mode packages. 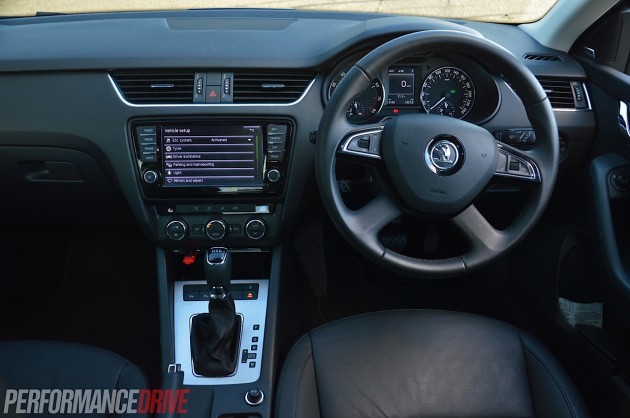 We have a bit of a gripe about the throttle response and transmission, in either mode. On take off there is an obvious stretchiness and slack to be taken up before you actually move off. We put this down to the dual-clutch transmission, which doesn’t bode well for Volkswagen’s somewhat shady reputation in power delivery.

The Volkswagen DSG is usually one of the better offerings out there. But here, in the Skoda, the DSG is nothing to write home about. Sure, it upchanges very quickly and on demand, but there is an elastic delay when taking off.

Skoda or VW may have purposely calibrated this unit so it is more ‘comfort-oriented’ compared with some of the VW and Audi units. However, even if you drive like you have a full fish tank on board, delicately pushing the throttle off the mark, there is still a moment of slack that is taken up before the car fully gets going.

If you drive like your pants are on fire, the powertrain will support your need to get moving. Flatten the throttle off the mark and it’ll leap forward and scream its way to whatever speed you’re aiming to hit.

The engine is powerful and rev-happy. Low-down torque is impressive, with max output developed from just 1250rpm, which means soaring up long steeps hills is not a problem at all. Even with a full car load the 132TSI engine has more than enough strength to pull forward and briskly overtake if required. We timed 0-100km/h in 7.3 seconds, which is better than average for this segment.

In terms of efficiency, we couldn’t get near the official 5.9L/100km average consumption rate. Instead, we achieved around 8.7L/100km in mixed driving conditions. For the amount of power and forward performance, 8.7L/100km is a respectable real world figure. 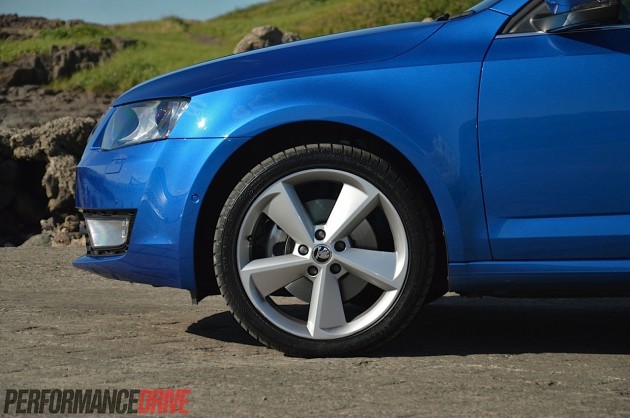 It’s sharper and more advanced than ever. It comes with a lot of standard equipment and luxuries, and it’s powered by a meaty 1.8 turbo engine. With Volkswagen build quality, decent luxury, and a friendly price tag, it is a very worthy contender in this competitive market segment.

The Octavia stands out as a unique and intelligent alternative to the common rivals.

CONS:
– Stretchy transmission and throttle response off the mark
– Some road noise 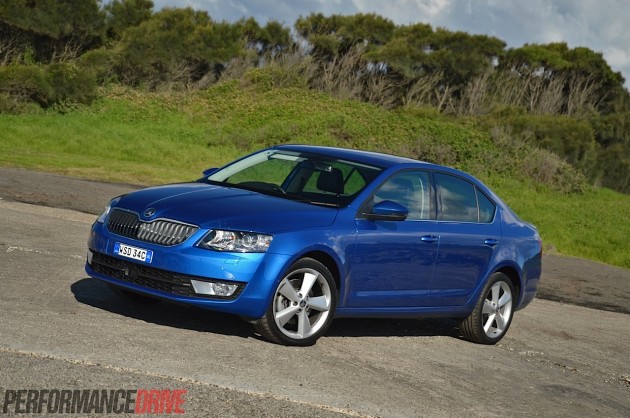