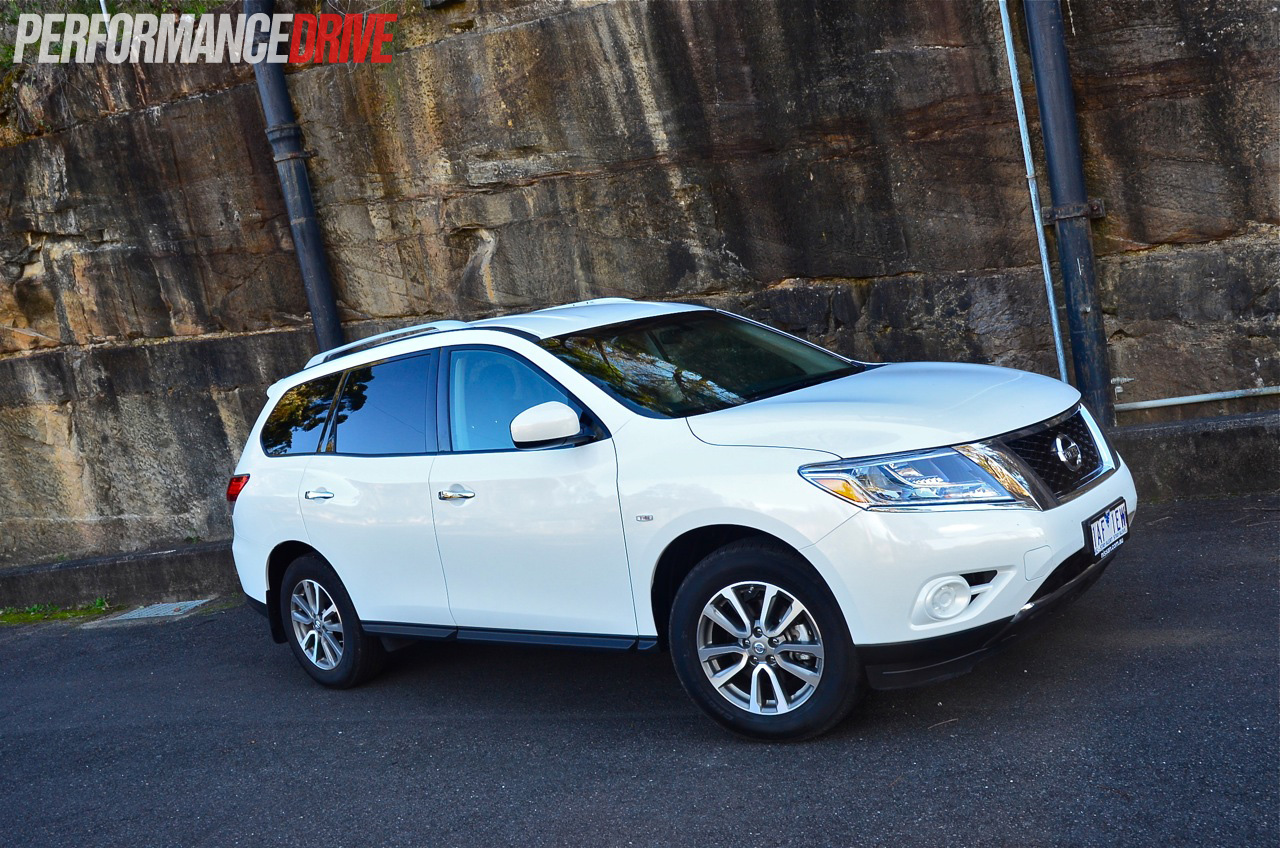 If you’re in the market for a seven-seat SUV then you you’ve got some decision making to do. With so many options on the table – AWD, 2WD, diesel, petrol, manual, automatic – it essentially comes down to two things; what you plan to use the car for, and how much you have to shell out. The 2014 Nissan Pathfinder ST is the entry-level variant of the all-new model. It’s not overly packed with technology, but it does what large families need; space and comfort. 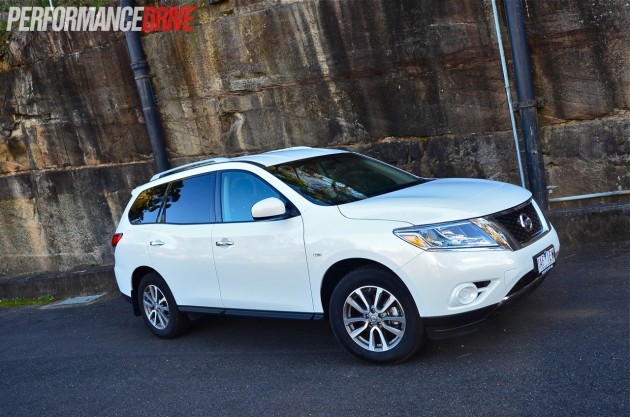 For the second time in the Pathfinder’s 28-year history it has switched from a body-on-frame 4×4 back to a monocoque platform (a platform that is also shared with the current Nissan Altima). What this means for buyers is a smoother ride, improved road manners, and a more stylish cabin. The previous model was better off road, this one is better on.

Also available in the Pathfinder range is a hybrid powertrain for each trim level, consisting of a supercharged 2.5-litre four-cylinder with electric assist. The ST hybrid model uses front-wheel drive, with both the ST-L and Ti equipped with 4×4 on demand. Opting for the hybrid unit costs a premium of $3000 for the ST, $7000 for the ST-L, and $7100 for the Ti over the base price of each variant. 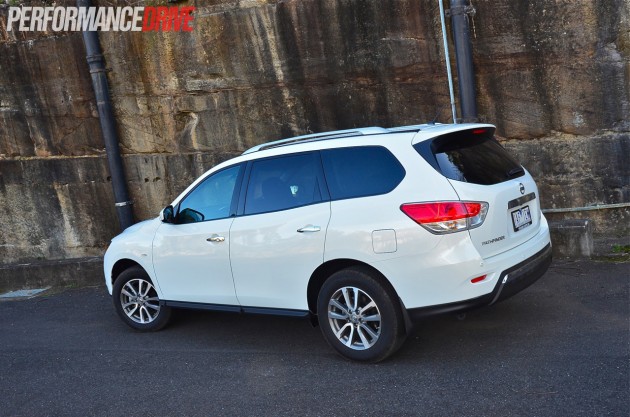 Opening up the driver’s door reveals a cabin that’s isn’t overly exciting, with an abundance of hard plastics and lack of colour. But it feels robust and ready for family use. The front seats offer plenty of cushioning and headroom for the driver and passenger, and the second row is equally accommodating. Usually only ideal for kids, the third row can surprisingly seat two adult passengers comfortably.

Styling for the new model is more city friendly, let’s say. Gone is the agricultural look of the old model that seemed more like a fridge on wheels than an SUV. The front end uses Nissan’s current design language, wearing a face that resembles the Nissan Patrol, and even the present model Pulsar. The lack of fog lights on the ST does make it look a touch low rent, but the chrome door handles are a nice touch.

In ST trim level you get soft cloth seats, clever climate control for all three rows, a seven-inch in-dash multimedia screen with 2GB of media storage, Bluetooth and USB connectivity, and a power adjustable driver’s seat. Families will love the four 12-volt sockets to keep things like portable fridges powered and tablets/phones nice and charged.

What the ST does miss out on that the higher-spec ST-L gets is leather trim, heated front seats, a panoramic glass roof, and front fog lights. The Ti model takes it even further, featuring a punchier 13-speaker Bose stereo with 9GB of storage, a larger eight-inch display with two rear multimedia screens, satellite navigation (optional on ST-L), cooling front seats, an around-view monitor system to check the SUV’s surroundings, and 20-inch wheels.

As you can see, the extra equipment in the higher spec models is lust-worthy, but none of it is essential if you’re simply after a people mover for a basement price. The cloth seats in the ST are impressive, allowing you to sink right in. And the seven-inch display, although slightly clunky in operation, offers a good view of the reverse camera. All models also offer privacy glass. 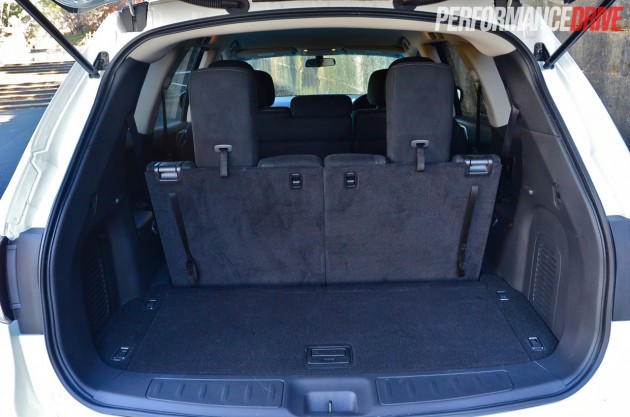 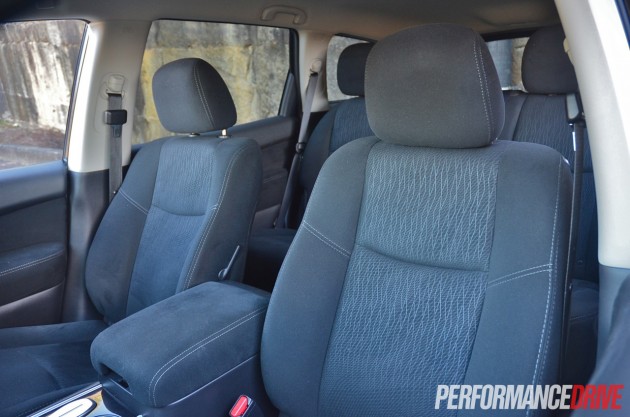 The rear two rows feature Nissan’s EZ Flex seating system, allowing the middle and third row to fold up revealing 2259 litres of cargo space. There’s also the option to fold only the middle row, leaving more space for the back two seats. Or you can just choose to fold the third row down. Cargo space with the third row up is more than enough to swallow an overnight bag and some groceries, however, it’s much more generous with the third row folded flat.

Although the boxy design of the previous Pathfinder made it look quite large, the new model actually trumps it in length (5008mm versus 4813mm) and width (1960mm versus 1848mm), but sits slightly shorter (1770mm versus 1768mm) for a more hunkered down appearance.

Safety-wise the ST comes standard with six airbags, including curtain airbags for the three passenger rows, a tyre pressure monitoring system, stability and traction control, reversing camera, rear parking sensors, as well as lap-sash seatbelts for all passengers. ANCAP has awarded the new Pathfinder 35.73 out of 37 points and five stars.

Towing capacity for the new model is rated at 2700kg for the petrol ST and 1650kg for the hybrid, down from 3000kg in the previous model and 3500kg in the Ti 550. There’s also a tow mode button that lets the CVT know you’ve got company and alters its manner to deal with the extra load. 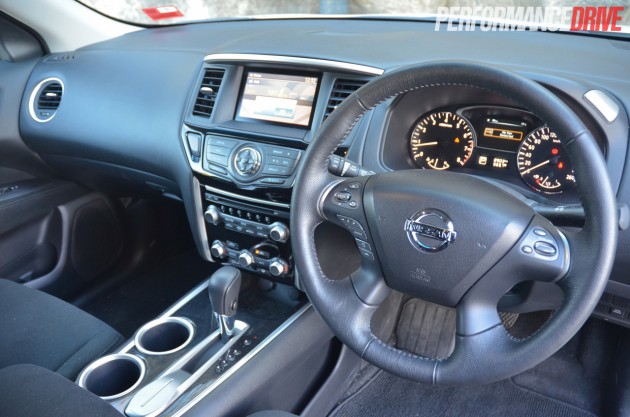 Power delivery from the ST’s 3.5-litre petrol V6 is aplenty and forthcoming. Off the line the front wheels do struggle to reign in the power if you’re heavy with the go pedal, causing the wheels to skip and squirm under a flashing traction control light. Once rolling, the Pathfinder remains poised and controlled – you’d barely know it was front-wheel drive. We timed 0-100km/h in 7.5 seconds – a respectable time for a large SUV.

Peak torque arrives late in the rev range, meaning you have to apply plenty of revs to get it moving in any hurry, which also affects fuel usage. During our test the engine used an average fuel consumption of 13.6L/100km. If you’re careful, you could expect to see the figure drop down by a litre or two. This is where a turbo-diesel powertrain would excel, however there are currently no plans to add an oiler to the lineup.

The big SUV isn’t what you’d call active in its cornering ability, with some play in the steering thanks to comfort-focused suspension and tall-profile tyres. Once it settles into a corner it bites in and follows your command with predictable understeer only intruding if you mistake it for a 370Z. Bumps and undulations aren’t a problem at speed, but they do upset the Pathfinder around town, causing the car to bobble somewhat.

The X-Tronic CVT meshes well with the 3.5-litre V6 to create a relentless power surge that operates without fuss. One of the X-Tronic’s best features in this application is it operates pretty much drone free, unlike other CVT-equipped vehicles. At low speed or out on the freeway, the gearbox feels intuitive and one step ahead.

Under brakes the ST does have a tendency to sink the nose into the tarmac, but its overall braking ability and performance is strong even after repeated abuse. 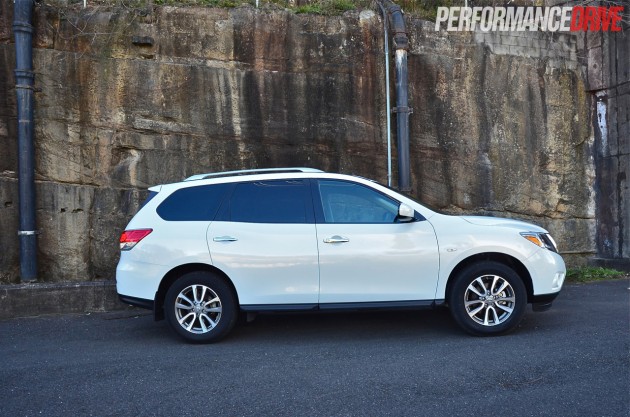 In the Pathfinder ST’s case, this is a no-nonsense SUV that can transport up to seven people around in comfort. It’s also not a bad looker, and should remain frugal (for a petrol SUV) if you drive it with caution. We did like the off road ability of the old model, but this new model is a much nicer car to drive everywhere else. Make sure you test drive one if you’re on the hunt for a large SUV, and be sure to tell us what you think in the comments section below.

CONS:
– New model loses proper off road ability
– Lots of hard ugly plastics in the cabin
– Wheel spin a problem during take off 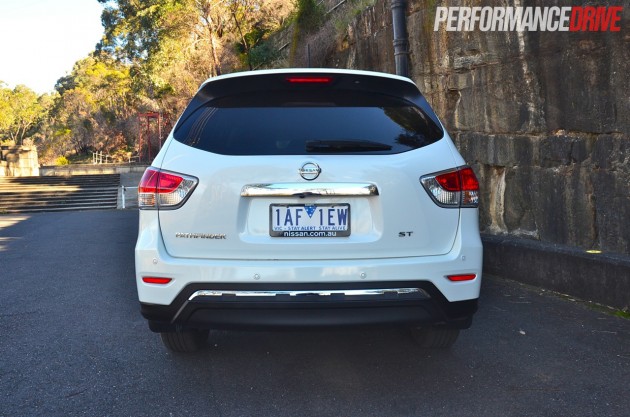