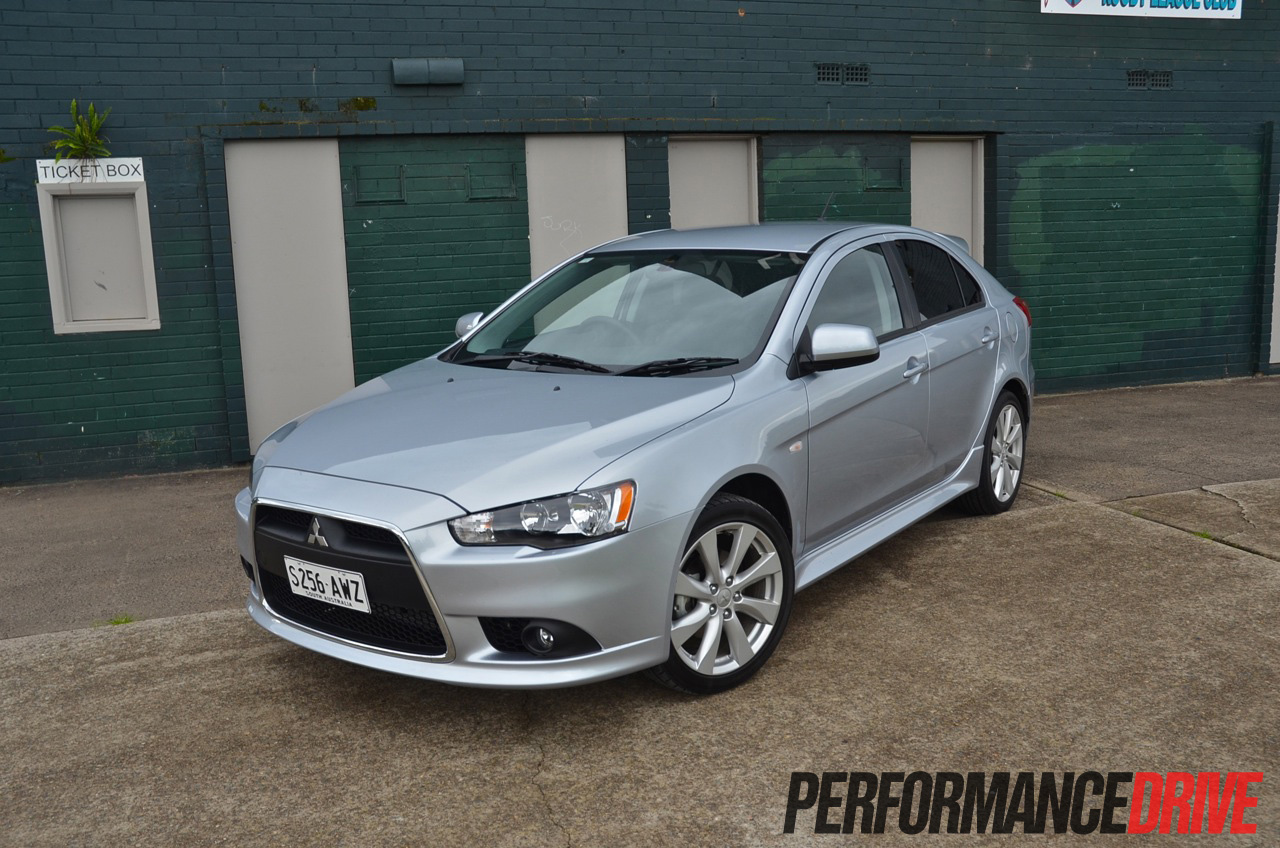 The 2014 Mitsubishi Lancer VRX has a hard task in front of it. Firstly, the CJ chassis is nearing on its eighth year in production. Secondly, most of its rivals offer better performance and economy. Is the aging Lancer still a worthy contender in the popular small car market? Let’s find out. 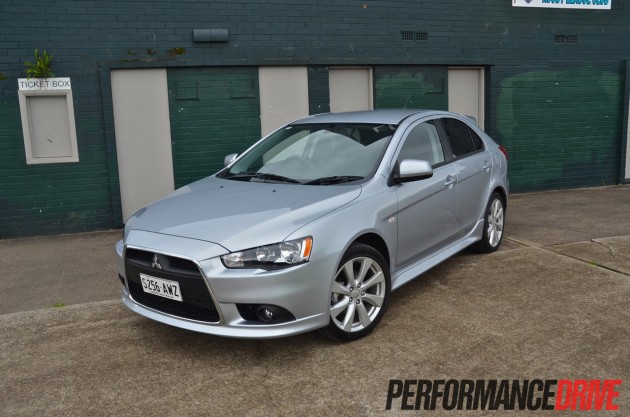 The VRX is powered by a 2.4-litre four-cylinder petrol engine producing 125kW and 226Nm. Prices for the VRX start from $29,990 with the five-speed manual (as tested), or $32,240 with the automatic CVT transmission.

The VRX sits just below the turbocharged all-wheel drive Ralliart and Evolution models. It’s the go-to Lancer if you don’t want a turbo, but still want the sporty looks and better-than-base model handling dynamics.

It’s available in Black, Lightning Blue, Titanium (dark silver), Red, Cool Silver, Warm Silver, and White. All colours other than white will set you back an extra $495.

Get PD to find you the best price on a new Mitsubishi Lancer by clicking here. 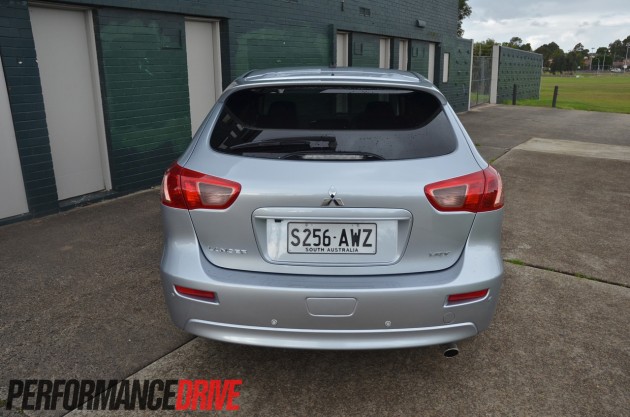 New for the 2014 VRX is the inclusion of a seven-inch touch-screen with satellite navigation. The Rockford Fosgate audio system carries over from last year’s VRX model, as does other features such as leather trim, reverse camera, heated front seats, auto wipers, dusk-sensing headlights, and a proximity key.

The Lancer’s interior feels robust and long-lasting, albeit with a few scratchy plastic surfaces on the door cards. The interior is a functional, non-complicated approach; all of the buttons and dials are easy to pinpoint, with clear and concise labelling.

The overuse of grey plastics means that it’s not an overly vibrant place to be, however, the cabin has an airiness to it, especially in the Sportback model, allowing passengers to stretch out on long trips.

The VRX’s leather is soft to touch and feels durable. The front seats could do with more padding for your bottom, but the back rests will suffice. The seat warmers are just the trick for cold mornings, heating up quicker than you can get out the driveway.

Sit down in the driver’s seat and you quickly find the steering wheel falls in your lap, with every control you could need at your fingertips. Headroom and legroom is also generous for both the front and rear occupants.

The boot offers 288 litres of space when the rear seat is up. The boot floor in the Sportback drops 90mm, increasing boot space to 344 litres – you just lift the handle up and adjust the panel accordingly. When you fold down the 60/40 split rear seat, you open up 1349 litres, which means you’ll be on speed dial when your friends move house.

After you’re done helping friends, the nine-speaker Rockford Fosgate audio system will put you in a good mood. It offers Bluetooth, USB and aux-in connectivity, and packs a real punch no matter what music you’re into. There’s plenty of equaliser adjustment in the system in case you want to turn the bass down, too – the ten-inch sub is definitely not just there for looks.

As we mentioned at the beginning, the Lancer is almost eight years old now, however it still manages to score a full five-star ANCAP safety rating (the most recent test was done in 2010). It features seven airbags, electronic stability control, traction control, rear parking sensors, a reverse camera, and two ISOFIX child seat points.

Even though the CJ Lancer shape is aging, in VRX guise it looks every bit as sporty as it did when it launched. The eight-spoke 18-inch wheels look slick, as does the rear roof spoiler and chunky side skirts. Colour coded handles are also a nice touch. 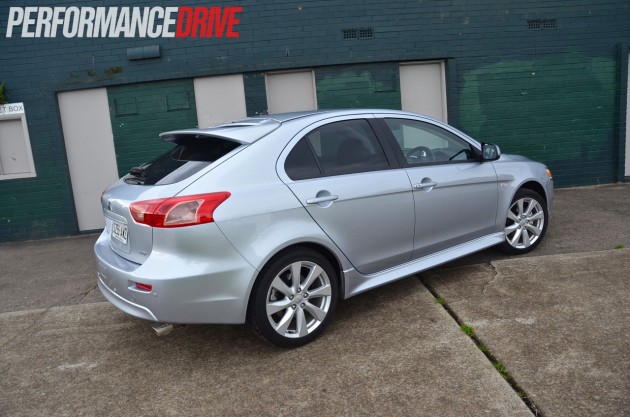 Off the line, the VRX takes a few thousand revs to really start to move. Anything under 3000rpm and you find yourself waiting for something to happen. Once you’re up and running, the engine does offer plenty of mid-range and top-end grunt. It isn’t the most rewarding engine note, though.

The five-speed’s shift isn’t anything to write home about, being quite stubborn when you want to up or down shift rigorously, but it does the job just fine under regular demands. The gears feel slightly long but it seems to suit the nature of the VRX’s large-capacity four-cylinder engine.

Back in 2012 we tested a Lancer VRX fitted with the optional CVT trasnsmission, and we found it very smooth. The CVT seems to make better use of the available power, and actually feels faster. Plus, you have the option of flicking it into manual mode (the CVT model comes with paddle shifters).

The steering feels solid, working well with the VRX’s sports suspension tune to create a drive that feels dynamic and up to tackling your favourite road. Mid-corner bumps don’t upset the VRX’s line, nor do pot holes or rough roads.

The lack of any proper front differential trickery means the inside wheel around a bend is more than eager to light up, or at least attempt to even when you have the traction control switched on. It does get quite annoying, especially when you’re trying to maintain a reasonable pace through a tight series of corners. It becomes more of an issue when it rains, leaving you to almost give up any spirited driving you had planned.

After punishing the brakes repeatedly down a steep mountain, the pedal feels faintly spongey. Things returned to normal after you let the brakes cool down. Even though the pedal can get spongey, the car still has good braking performance.

During our test we could only manage to record an average consumption figure of around 10.2L/100km. With the official average being 8.8L/100km for the manual, it is the most inefficient sporty small hatch on the market – even the much more powerful Volkswagen Golf GTI offers a lower official rating (6.2L/100km). 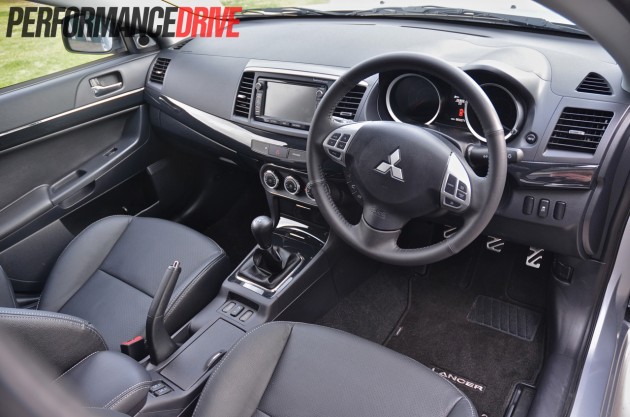 The Lancer VRX is overall a fun car to drive with an airy cabin that’s fitted with all your basic needs.

The only thing that lets the Lancer down in today’s market is its plain interior, under average fuel economy, and the aging exterior design. Mitsubishi’s five-year/130,000km warranty and five-year roadside assist is definitely good peace of mind, though.

We recommend choosing the CVT over the five-speed manual, namely because it’s smoother and makes better use of the VRX’s 2.4-litre MIVEC engine.

CONS:
– Gearshift is notchy and vague
– Suffers from torque-steer
– Interior looks dated
– Front seats could do with more padding
– Poor fuel economy for this segment 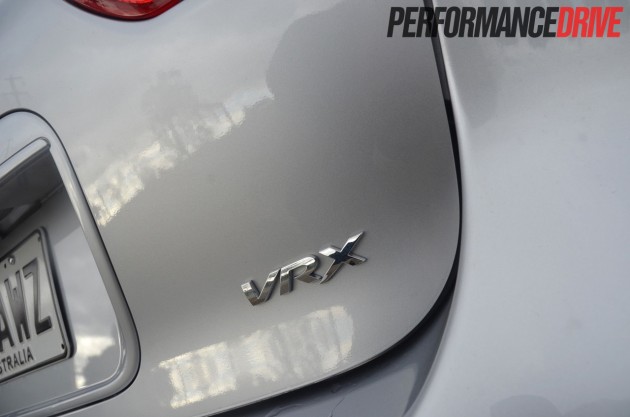