The humble SS Commodore has been around for over 30 years now. Does the 2014 Holden VF Commodore SS carry on the nameplate with pride and pedigree? 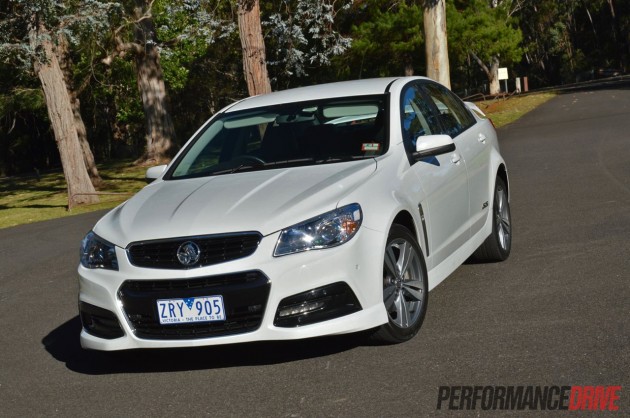 Here we have what could be the bargain performance sedan of the decade; a bog-standard (aside from a $500 optional rear spoiler) VF SS automatic. It’s going to be, and if it’s not, should be a popular choice for Aussie sedan buyers.

It comes with proper V8 muscle up front, rear-wheel drive at the back, and a quality sports environment in the middle. The auto drops 10kW over the manual version (260kW vs 270kW), but it does come with AFM fuel-saving cylinder-deactivation technology (not featured on the manual).

Best of all, the price has be cut for the VF range, with the auto SS kicking off from a very reasonable $44,190. The manual version though, it starts at just $41,990, which is an insanely cheap price considering the amount of standard features it comes with, let alone the V8 grunt. As you’ve probably read and heard over the recent months, the new VF Commodore has been extremely well received by the public and media. And for good reason. Holden has really stepped up to the international standards this time around, with a modern wind-tunnel-tested design, loads of technology, and a spanking new interior that really leaps ahead of the class.

Aside from a completely fresh cabin layout with modern themes and multiple textures and tones, there’s none of the hard scratchy plastics that were used on the VE. It’s all about soft, calming shades, with separate layers on the dash boosting the premium feel. These layers can be had in two different sets of colours; a light cream and grey or the black and dark grey like what we have here.

The VF SS is a warm and cosy place inside, with big soft seats that are well bolstered and supportive yet also very comfortable and relaxing. All four seats are capable of providing excellent accommodation for kids up to large adults. The middle rear seat, as with almost every vehicle on sale, is a touch more restrictive and a little less comfortable than the rest.

Like a beam of light shining down from the sky, the MyLink infotainment eight-inch LCD touch-screen glows proudly at the top of the dash. It is by far the most impressive advance for the Commodore interior and for the Aussie sedan segment. It comes standard on all VF variants with a smorgasbord of features. Essentially, MyLink combines all of the on-board functions and settings into one unit.

Happily, it’s not a confusing unit to use. There are quick jump-to menu buttons on the sill of the screen, or you can toggle through the various widgets, including Pandora and Stitcher application-based music players, by touching the screen options. It also comes with Siri Eyes, Bluetooth support, and USB/MP3 playback.

The base model SS does miss out on satellite-navigation, but you can specify it as an option for an additional $750. An electric sunroof is also optional, priced at $1990. Like all VF Commodore variants, the SS gets Holden’s advanced parking assist feature as standard. The system is capable of parallel or perpendicular parking the car for you with automated steering – you still have to control the brake and accelerator pedals.

Using the parking assist is pretty nifty in tight city car parks, or if you aren’t confident steering a big sedan. We found the system to be quite remarkable but a bit of an overkill. For perpendicular parking, for example, the system by default cannot do the reverse park in one go. Instead, it requires you to tirelessly put it in drive and then reverse again even though you could easily swing the car in in one go if you’d done it yourself. In our opinion, it’s more of a techno show-off than a modern convenience.

As for safety, all VF Commodores come with a five-star ANCAP rating. It comes with eight airbags, stability and traction control, a rear-view camera, auto headlights, and LED daytime running lights.

As previously noted in our VF Commodore launch review, Holden sacrificed 48 prototype VF vehicles during the development of the VF for the sake of improving safety. The first prototype of which was worth around $350,000.

Up to 25,000 computer simulation crash tests were also undertaken, using computers that are twice as powerful and accurate as those used when the previous VE Commodore was being developed. In other words, the VF SS more than supersedes the current safety expectations and industry standards.

So for the performance enthusiasts, what does the SS come with over the regular Evoke and other models? Holden has divided the entire VF lineup into two; the ‘Touring’ tune and the ‘Sports’ tune.

Basically, the SV6, SS, and SS V all come with sports FE2 suspension and a sports electric steering setting. The rack and gearing in the steering is the same across the board, but in the Sports tune you get slightly more weight to boost the engaging driving experience. After driving Touring and Sports systems back to back, the difference is noticeable, with the Sports setup offering a more enjoyable interaction. Holden has improved grip levels and driver enjoyment for the VF SS over the VE SS thanks to various chassis and suspension changes, as well as plenty of weight reduction. The dash IP beam, for example, is now aluminium instead of steel and weighs 6.2kg versus 9.2kg. Each wheel is now supported by aluminium suspension knuckles too, which save 3.8kg at each corner. Out on the road, the changes translate to a playful performance character.

When we initially drove the VF range back in May, we were blown away by the sheer number of improvements to the interior and in technology. After spending a week with the SS, we found the electric steering to offer a good weighty feel with decent communication. It isn’t quite as precise as a similarly priced European rival, and there is a bit of play on centre.

Push it through some bends and you do notice the weight of the car as it hustles from corner to corner. It does feel a little bit lazy in terms of chassis and suspension response. Understeer and oversteer isn’t clearly conveyed to you, at least upon initial traction loss.

If you’re a more experienced driver, you can throw it around with pleasure. You have plenty of faith in the 6.0-litre 260kW V8, which allows you to use the torque to push the rear end around corners. Controlling a bit of a drift is fun. It is a bit vague, as mentioned, during small twitchy drifts, however, if you give it a bootfull you can hold a long smokey powerslide and it will provide you with good clear feedback that you need.

The six-speed auto is probably the option most buyers will go for. It does feel a bit slower than the manual, partly due to a longer final drive ratio; 2.92:1 for the auto and 3.45:1 for the manual. Off the mark it’s more of a smooth take off as the revs build, while the manual can obviously be much more abrupt if you want it to be.

It’s a nice transmission, in that, it won’t break your back with lightning-quick upchanges. It will blip the throttle on the downshifts if you use the sport mode too, engaged by slotting the gear lever over into the plus/minus section. Again, it’s not a super-quick transmission but it’s comfortable and capable enough to provide decent thrills. It also presents a good spread of ratios. Holden has said it created the VF using lots of feedback from the customers. Everything about the SS seems like it was designed exactly like that; by the users. It is an everyday performance car. It’s not too stiff or too focused in any one area, which makes it ideal for the daily commute.

On the flip side, if you give it a tickle and start rummaging around with the steering and throttle, it’s fun and loves to play. It probably won’t beat some of the less powerful but lighter sports cars currently on sale, in terms of track times, but that’s not really what the SS is about.

It’s the gentle giant of the performance sedan segment, and more than lives up to the SS nameplate. In fact, it carries the badge on into the future with a perfect balance of grace and tradition.

PROS:
– Nice interior and materials, great seats
– Excellent level of standard kit for the price
– The price
– Fun-loving handling
– Most advanced SS ever

CONS:
– Steering could be more precise, a bit vague when driven enthusiastically
– Auto gearbox is behind in technology; isn’t more efficient than the manual (12.3L100km vs 11.5L/100km)
– Optional rear spoiler blocks rear vision
– V8 too quiet?