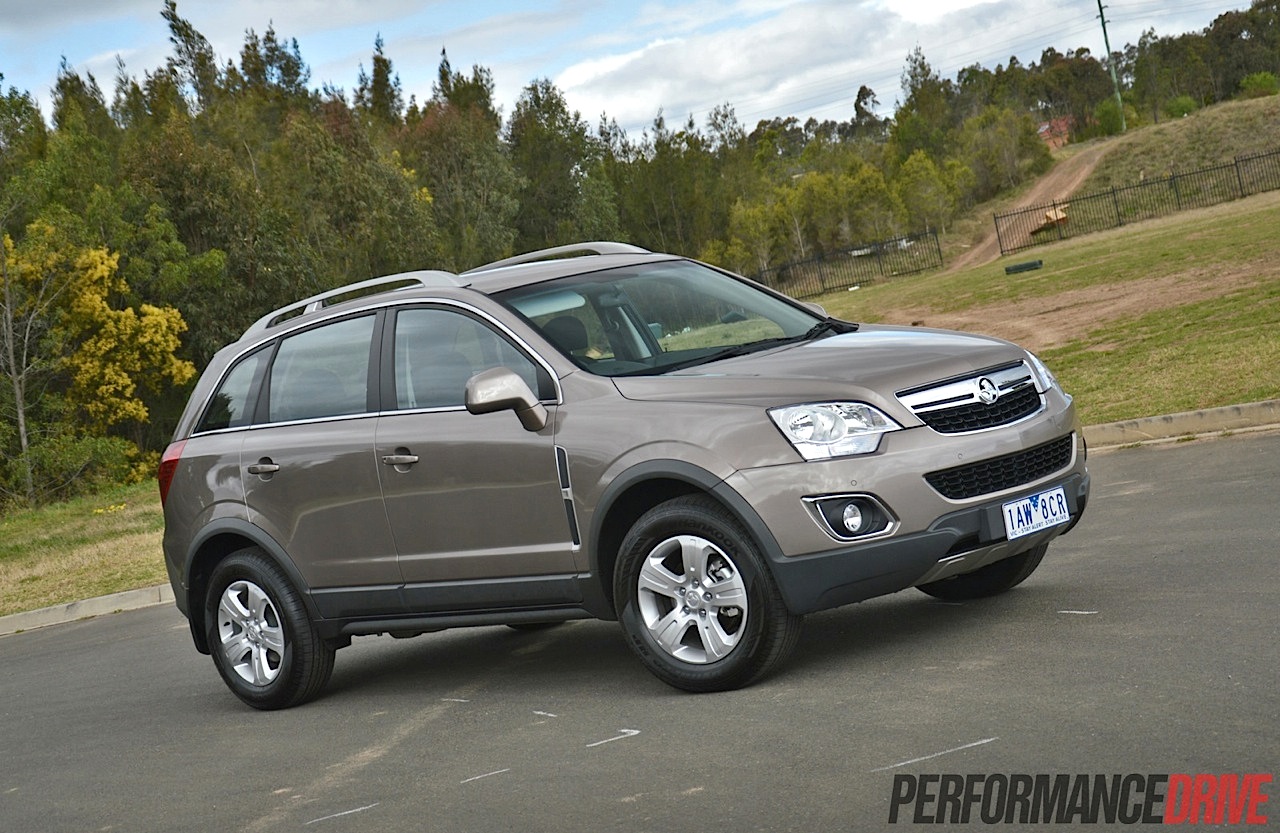 The current Holden Captiva 5 is one of the older propositions in the popular and very demanding small SUV segment. It’s made by GM Daewoo in South Korea and has been around in almost the same form since 2006. Can it still hold it with the modern newcomers? 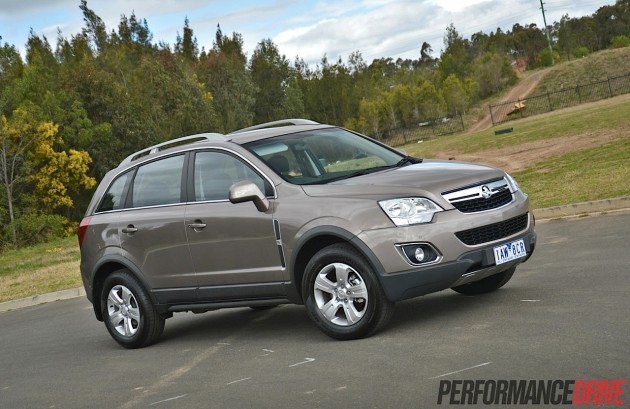 Holden is under a fair bit of pressure at the moment, to say the least. Two of its chairman/managing directors have resigned in the last two years. Sales have been slowly declining for most models as well, aside from the Commodore which has seen some spikes in popularity since the introduction of the VF in 2013.

For the Captiva 5, as mentioned, it sits in a rather dangerous market segment. All rival companies are coming out with super-modern offerings that are packed to the brim with features. Some are equipped with efficient high-tech turbo-petrol and turbo-diesel engines whereas the Captiva 5 uses a 2.4-litre EcoTec naturally-aspirated unit producing 123kW and 230Nm.

Two trim levels are on offer in Australia at the moment, including the LT (as tested) and the higher-spec LTZ. Both versions are available in front-wheel and all-wheel drive, and with either the 2.4 petrol or a 2.2-litre turbo-diesel (135kW/400Nm). Prices for this base model LT petrol manual start at $26,490. 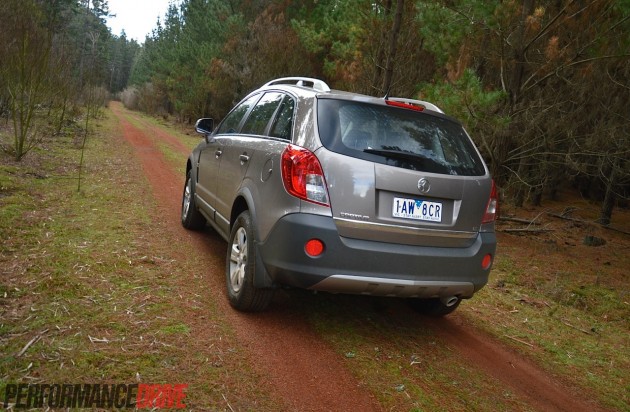 Not to be confused with the Captiva 7, the Captiva 5, sharing the same ‘Theta’ platform, is Holden’s second smallest SUV/crossover. It only comes in five-seat form whereas the Captiva 7, as the name suggests, is available with seven seats. The exterior dimensions and design are quite different to the larger brother, with fuller headlights, and a different rear end and under-fascia.

Stepping across into the Captiva 5 is made easy thanks to its reasonably high ride height. Drivers who enjoy the perched up driving position of a 4×4 will quickly warm to the layout offered here. You get a good view of the road ahead with unobtrusive A-pillars and a wide-open windscreen. Looking over your shoulder into the blind-spot area is also relatively clear.

Interior design is something Holden has really amped up in recent years, but for the Captiva it is still quite dated, particularly the dash design. To keep up with the market segment it needs Holden’s latest MyLink interface, instead of the basic 1990s-like telephone touch pad with circular buttons and pixellated orange and black display screen. Functionality and screen navigation is not a strong point either, with only three main menus managed via a basic rotary-and-press controller.

Most of the interior quality and materials seem okay for this segment, especially considering the Captiva’s low starting price. Holden has used various silver and grey highlights to break up the design a bit and to bring a splash of contrast. We’re not a fan of the big chunky silver section in the lower half of the steering wheel though. It’s hard and somewhat awkward to grab.

There are lots of storage solutions for all passengers, including a clever dual-level cup-holder centre console that goes deep down to the top of the transmission tunnel – you can almost fit an entire bottle of wine in it standing upright. There’s also a storage compartment under the passenger seat and in the cargo area. Front and rear seating space is respectable for this segment, with decent headroom and legroom in the back.

In the very back the Captiva 5 boasts a 430-litre cargo area, of which can be expanded to 865 litres with the rear seats folded down. Unlike some SUVs on the market, the seats in the back fold right down to provide a completely flat cargo bed. This test example came equipped with a handy rubber mat, slightly dished to catch wet objects. 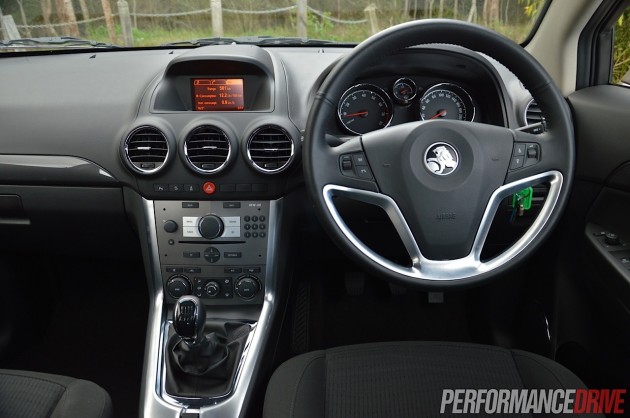 Driving the Captiva 5 is where you notice the vehicle’s age. Body control and handling around corners is rudimentary, with some bumps sending shudders echoing through the chassis and up into the steering. Road holding and grip is fairly confident and mostly reassuring under mild to semi-athletic driving conditions thanks to the fully independent suspension.

Unfortunately, using the six-speed transmission to arouse enthusiastic driving is not as encouraging as one would hope. Shift action is notchy and the shift throw is long and sloppy. In fact the drivetrain in general feels clunky and chunky, a bit like you’re driving an old milk truck. All SUVs in this segment are not designed to be sports cars, obviously, but almost all rivals that we have driven behave more dynamically.

Engine power is acceptable for this segment, at 123kW, but the way it comes on feels lethargic and unresponsive. Torque is also disappointing and only accessible at 4600rpm. This is quite high in the rev range for an SUV. We timed 0-100km/h in a dozy 10.3 seconds. It feels slow with very little in the way of surging or progressive delivery.

In saying that, it is an easy SUV to drive. There’s good vision and it’s easy to predict where each corner of the vehicle is for parking and so on. The steering is light and the column is adjustable for rake and reach, so you can line up a natural driving position. Standard parking sensors front and rear make life easier too, even though there is no reversing camera available.

If you’re looking to do some camping and getting amongst the wilderness, the front-wheel drive Captiva 5 can certainly facilitate that. You don’t necessarily need to go for the four-wheel drive model. All models offer a 200mm ground clearance, which is more than adequate for a softroader like this, and the 235/65 tyres offer aggressive tread to tear up the mud. 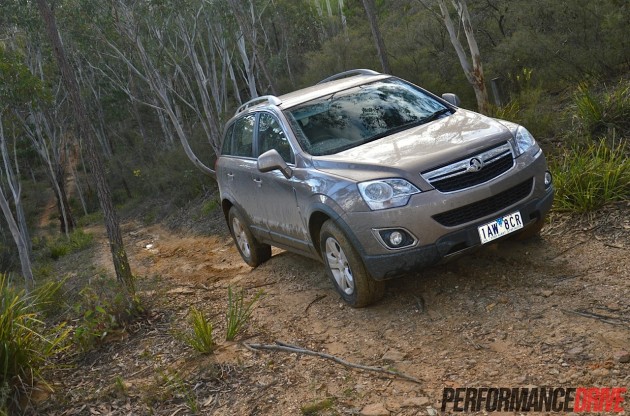 After glancing over the competition, there isn’t really any area where we think the Captiva 5 LT stands out. It’s not especially fuel efficient – we averaged 10.5L/100km (official 8.8L/100km) – or quick. The cabin needs to be updated, and the driving manners won’t win any awards.

It’s easy to look at the Captiva 5 as a cheap and cheerful SUV, but in reality, if you’re spending thousands on a product, you want to know you’re getting the best. And the Captiva 5 is just too old now to cut it with the more modern and better-equipped youngsters.

Unless you’re an immoveable Holden fan, the only reason you would buy this car is if you hadn’t checked out any of the rivals. There are many SUVs/crossovers on the market at the moment that are superior to this, and some are available at a similarly low price. 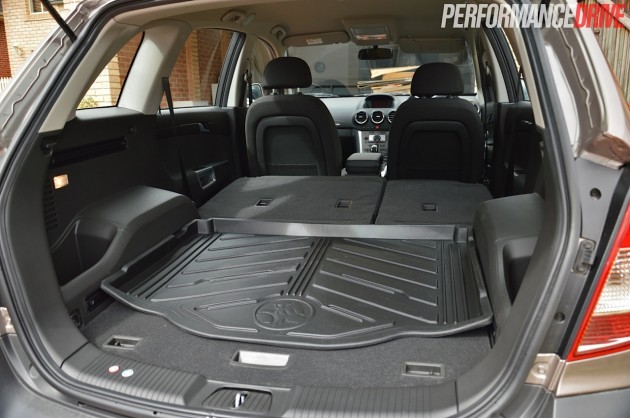