Some more details are starting to come through surrounding the next-generation, 2014 Ford Focus RS. The new model is set to be even more powerful than the already-ballsy previous model, while also featuring various mechanical technologies to really boost handling and grip. 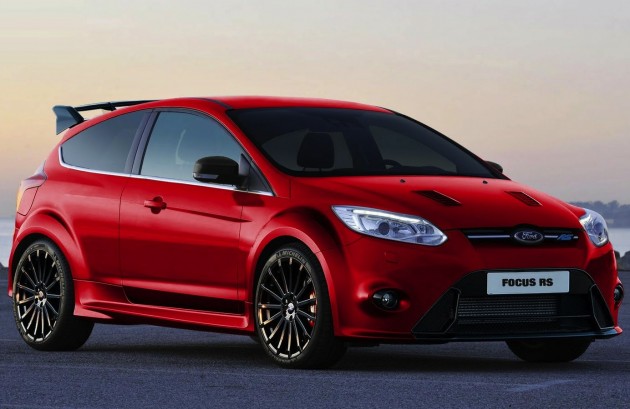 According to a recent Auto Express report from the UK, the new Focus RS will sport a fresh EcoBoost four-cylinder engine instead of the previous 2.5-litre five-cylinder job. Capacity will be 2.3 litres.

It’s understood the engine could not have been a revised version of the current 2.0-litre EcoBoost unit. The report says that Ford Europe and Team RS were not going to simply add a larger turbo to the 2.0-litre, as this would have increased turbo-lag and fuel consumption.

The 2.3-litre is set to offer great low-down torque and plenty of power up high. Speaking of which, they’re talking of figures around the 257kW mark. This would make it loads more powerful than the previous 224kW model.

In other areas, the Focus RS is set to come equipped with something called an ‘active differential’. Feeding 257kW to the front wheels is always going to be a challenge, however, the new diff is expected to distribute as much of the engine’s power and torque into the wheels according to their traction at any given time. Len Urwin, Team RS powertrain engineering manager, said in the report,

“You could drop a mechanical diff in as we did with the old Focus RS, but an E-diff would take that a step forward in that you can really optimise traction in all situations.”

The new model is also expected to come with an advanced front suspension setup – like the previous model – to really help put the power down to the ground, and keep it on the ground.

Market entry is slated to take place in 2014. Hopefully some of these super pocket rockets will make their way to Australian shores again. We’ll keep you updated.