Some information is starting to come through on the next-gen 2014 Porsche 911 GT3. The hardcore model is set to be lighter in weight and more powerful than the predecessor, while offering a possible redline beyond 9000rpm. 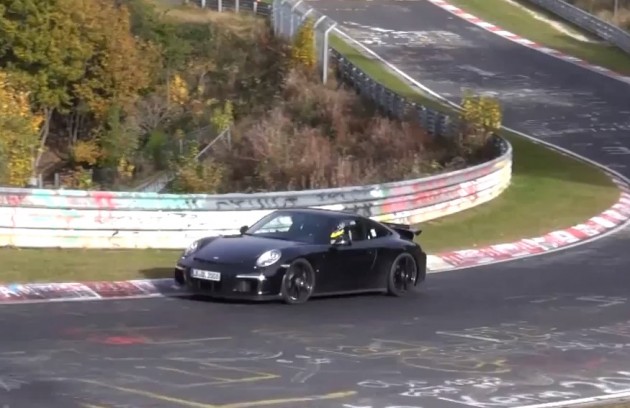 The news of the high redline comes after some spy images taken by a Rennlist forum member appeared online, showing a prototype 991 Porsche 911 GT3. The images reveal parts of the interior, including the tacho which shows a 10,000rpm maximum redline.

As for the engine, the new GT3 will reportedly come with a 3.8-litre naturally aspirated flat-six like the outgoing version, however, thanks to extensive tweaks and revisions, power is expected to be bumped up to around the 335kW mark.

Not only is this around 15kW more powerful, the next GT3 looks as though it will come with a more aggressive aerodynamics package. With a large rear wing and lots of air-cutting vents and spoilers, overall track times are likely to drop quite drastically over the previous model.

There’s been a bit of flack going around lately about what sort of transmission the new GT3 will adopt. Fans are afraid the GT3 will lose its raw machine character with the introduction of a dual-clutch auto. Judging by the spy images and the video below, the GT3 will at least come with an auto as an option. This will be a first in the model’s 14-year history.

More details are expected to be revealed later this year. In the meantime, check out the video below showing a prototype being pushed hard around the Nurburgring, spotted in December last year.