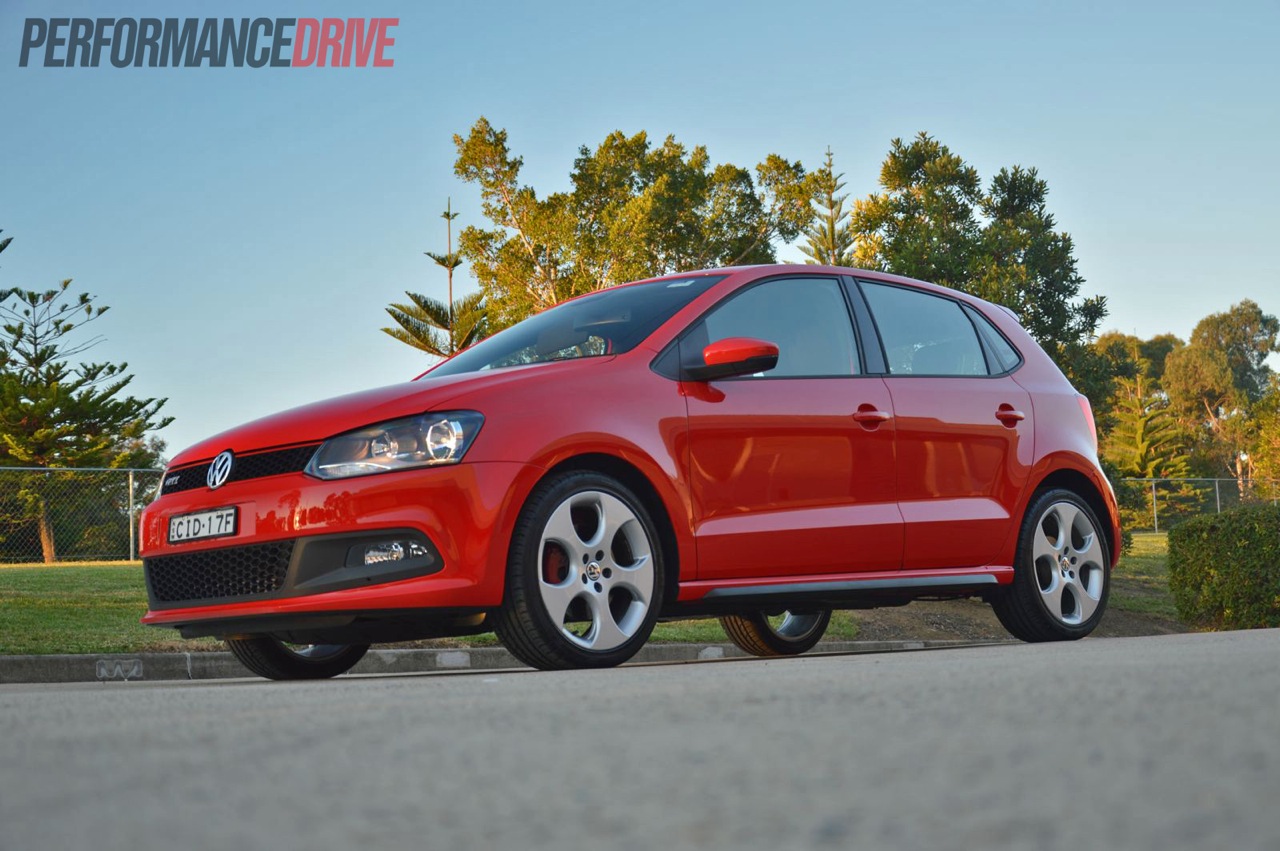 Since its inauguration in the early 1990s, the Volkswagen Polo GTI has been the benchmark for pocket-sized sports cars. Many prominent motoring companies and journalists have long considered the Polo GTI to be the class standard in hot hatch capabilities, often with other manufacturers striving to reach its standard.

Now that others have had some time to catch up, the competition is as fierce as ever. Let’s see if Vee-Dub still has the winning formula for the 2013 version to continue as the leader. 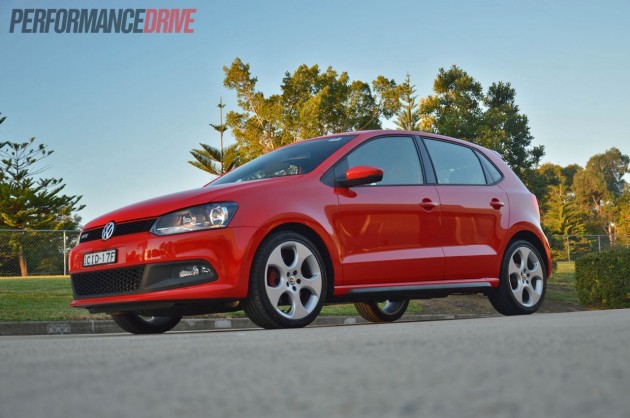 A leader in any market is a tough position to maintain. Not only does the product steer the direction of that segment, it also receives the toughest scrutiny from critics. For Volkswagen with the Polo GTI, previous models have set a standard and a high expectation which it has to improve on now with each new model – a tough job.

The hot hatch market in recent years has positively become more crowded with choice, as consumers opt for fuel efficiency and sportiness over outright horsepower. You have the upcoming, and so far highly praised, Ford Fiesta ST, the well-rounded Suzuki Swift Sport, the Renault Clio RS, and the most powerful bite-sized pocket rocket, the 141kW Opel Corsa OPC.

Before you read the specs of the Polo GTI, it’s worth explaining that this car is one of those that isn’t well represented by the on-paper measurements; you really need to drive one to appreciate what’s on offer here. 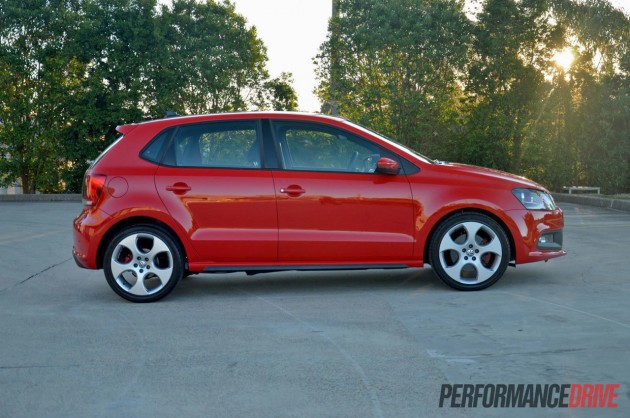 Let’s start with the most important aspect of any sports car, the engine. You get a frugal 1.4-litre turbo and supercharged four-cylinder engine producing 132kW at 6200rpm, and 250Nm of torque widely spanning from 2000rpm to 4500rpm.

It isn’t the most powerful hatch in this class, but it is the quickest currently on sale, in our books – the Clio RS, Corsa OPC and Mini Cooper S all take around 7.1 to 7.2 seconds to reach 100km/h. Despite being the quickest, the official average fuel consumption is rated at 6.1L/100km, which is very impressive. Although, the more expensive 95 RON fuel is required.

In what might be a deal breaker for some, Volkswagen has decided to only offer the Polo GTI with an automatic DSG transmission in Australia. Considering sporty car buyers like to feel interactively connected with their cars, no third pedal is a bold move. Nonetheless, Volkswagen has made a decent attempt at keeping the driver-machine connection alive, with paddle shifters and a very keen sports mode.

The interior of the mini Golf GTI is just as much of a strong point as the rest of the car. We believe the interior makes the best use of space available in regards to the competition, with good legroom front and rear.

The interior decor also looks the most mature in our opinion, and perhaps the most conservative compared with its rivals. The materials are of high grade quality, while the traditional tartan pattern on the seats is a nice touch. Climbing in and out of the rear is made easy with the option of five doors – most of the competitors only offer three.

If there were only two words allowed to describe the exterior design of the Polo, we would say cute and athletic. Sharing many similarities to its bigger brother, the Golf, Volkswagen tends to adopt a company-wide signature look across the range more than any other company.

But that’s definitely not something to complain about. Conservative with the body shape, sharp with lines and panel surfaces from front to rear, ultramodern with LED lighting, and slightly aggressive dual front grilles, the GTI doesn’t steer too far away from the looks of its base model. 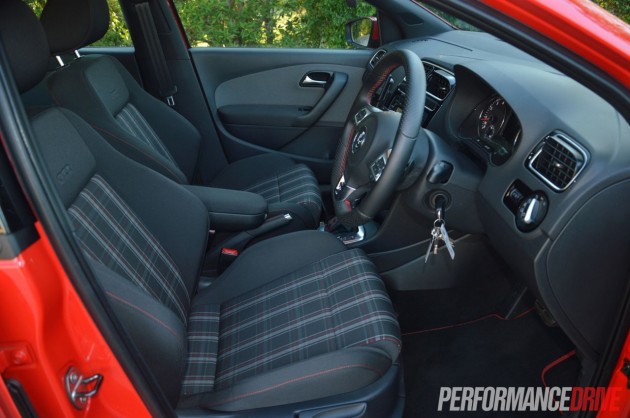 Moving on to the most important part, is the Polo GTI really a fun car to drive?

It feels like you have complete control of the car, at all times. This gives you significant confidence in the vehicle, and it establishes an instant rapport. It makes you feel like the car is an extension of your own limbs.

Put it this way, if we had to get from one side of a busy city to the other, we’d choose this. Its nimbleness and delivery of power provides you with a delicious combination that’s second to none. Throw it around any corner, and it’ll rail around like it’s mechanical connected to the road. Although, full power while steering tends to result in minor torque steer, which is fair to say, expected from a high-output front-wheel drive.

The steering is extremely direct and responsive, and it doesn’t require many turns, so it’s perfectly suited to give you that athletic character. You get plenty of feel, feedback and realism on the road too. So much so, it encourages you to treat every corner like a fun obstacle.

With maximum torque available from just 2000rpm, partly thanks to the supercharger, the ease of getting up to speed from any gear is second to none. It provides that relentless urge and some g-force, no matter if you’re going up a hill or carrying four other people on board. Or both. Best yet, it gives off a rally-car-like note from the exhaust, and a distinct Volkswagen parp in between gear shifts. The engine sound heightens the overall experience better than any of its competition.

The main pitfall, a minor one at that, is the DSG automatic transmission. Most dual-clutch units have a slight delay in power delivery from take off. And in the Polo, the trait is evident. The Polo will rev up slightly before actually moving forward, like a manual. It can be slightly off-putting at first, but it is something that you do get used to. After all, this transmission setup proves to be notably quicker than a conventional manual.

With such cute proportions, the suspension copes surprisingly well under higher speed dashes through a country road. Bump steer is extremely faint, with good suspension travel soaking up even the bounciest of undulations.

Like most German vehicles, the Polo GTI damper setting is firmer than what you might expect from a Japanese car or an Australian car. It provides satisfactory comfort during suburban commutes. While commuting is one of this car’s job skills, it is more appreciated for its fun and capable driving nature.

The brakes don’t look as performance-oriented as a set of cross-drilled multi-piston setups, however, they provide excellent stopping power. We found no issues with fade or overheating during our harsh tests. 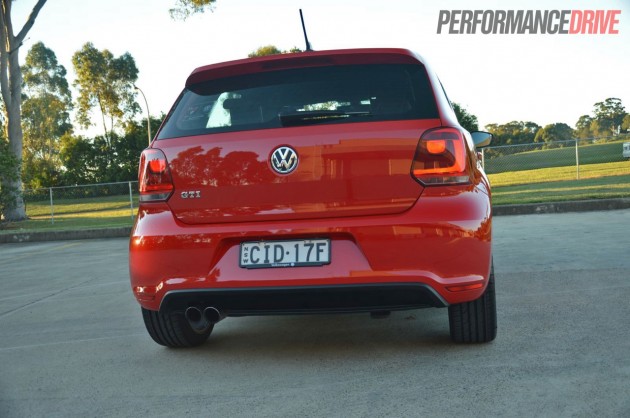 Blend that with a confident, capable, and concise chassis setup, we believe the Polo is still the benchmark vehicle for this segment. It simply does everything so well, with very little side effects.

CONS:
– Only available as an auto
– Some torque-steer under full power while turning 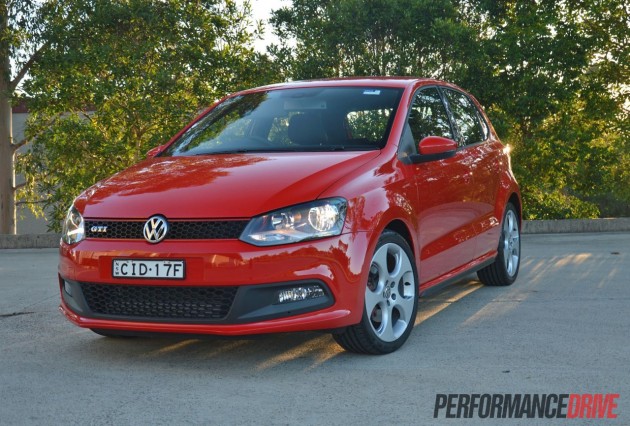