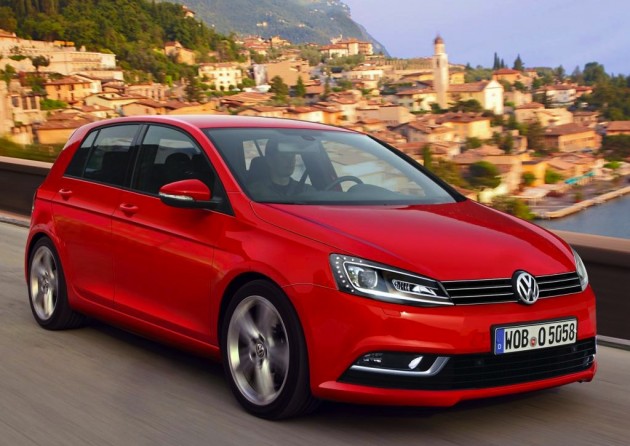 Being lighter in weight will not only improve performance, it also has great potential to improve fuel economy and handling. The way Volkswagen will achieve this is through the use of a stronger steel in its construction with reduced quantities. This is said to improve economy by as much as 23 per cent.

Along with being lighter, the 2013 Golk Mk7 will also be slightly larger. Specifically, it’s said to be 56mm longer and 13mm wider, as well as being 28mm lower for a more sporting profile. The wheelbase is also set to grow by by 59mm, providing increased leg and shoulder room inside.

In the back, boot space will apparently expand by 30 litres, offering 380 litres in total, and its loading point will be around 17mm lower for easier access.

All this will be thanks to the new MQB platform which will be used on various other vehicles under Volkswagen Group’s umbrella in the coming years. By sharing platforms like this, it’s estimated that VW will be able to save up to 20 per cent in production costs, in turn, assisting to keep prices down in the showroom.

As for the engines for the Mk7 Golf, reports say that one of the main engines will be a 1.4-litre turbocharged four cylinder producing 103kW. With the help of cylinder-deactivation technology and the latest seven-speed DSG dual-clutch transmission, economy will be around 4.8L/100km. A range of turbo-diesel units is also likely.

No further details of the 2013 Volkswagen Golf GTI Mk7 hot hatch have been revealed at this stage. As far as we know, it will come with a slightly boosted engine producing around 160-165kW. It’s understood it will also come with a new mechanical limited-slip differential for improved traction. Acceleration from 0-100km/h is expected in the 6.7-second region.

According to an Automotive News report, the Mk7 Volkswagen Golf will be unveiled during a special media event in Germany on September 4. We expect more details, and images, then. Stay tuned.