Volkswagen has finally unveiled the all-new 2013 Volkswagen Golf Mk7 at a special event in Berlin. The new model is larger than the outgoing version, and showcases an abundance of new technologies and features. It also comes with fresh styling inside and out. 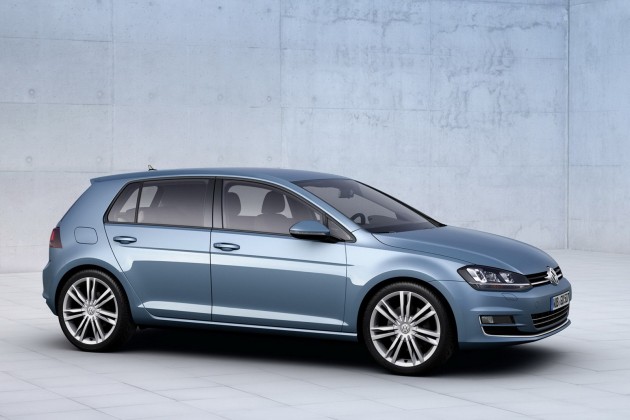 As we’ve already learned, the 2013 Volkswagen Golf Mk7 is built on Volkswagen Group’s new MQB platform which also underpins the new Audi A3. This will allow the company to save up to 20 per cent in production and development costs, while also shortening assembly by 30 per cent.

As well as being underpinned by a new cost-saving chassis, the new Golf Mk7 is larger. It’s 56.9mm longer and 13.2mm wider than the current model, providing more interior space and boot space. This will help it not only rival the likes of other small hatches, but also mini MPVs and mini SUVs. 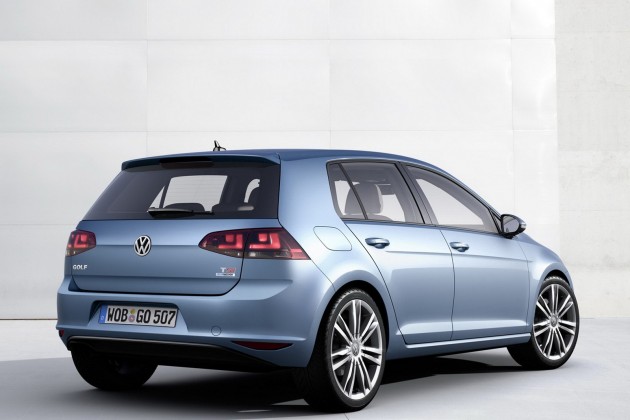 Despite being larger, the Mk7 Golf is also lighter in weight by over 100kg. This allows it to be more fuel efficient, as well as handle and perform better than the current model.

In terms of safety, the 2013 Mk7 Golf comes with loads of new technologies. Chief among which is the new Multicollision Brake system. This is triggered the second the car is involved in an accident. It works by applying the brakes automatically to reduce the chance of a follow-on crash, in case the driver is unable to hit the brake pedal. It is a first for this vehicle segment.

Other safety features include a speed limiter device, City Emergency Braking, fatigue detection, traffic sign detection, lane assist for blind-spot warnings, and adaptive cruise control. It’s unclear at this stage if these features will be fitted to all variants. It’s likely they will depend on trim level and/or market region specifications. 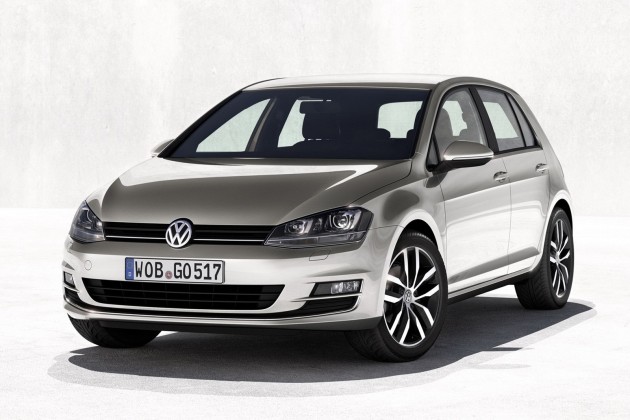 As for the styling, the new model is a bit sharper and more sleek compared with the current model. It’s not a totally new design though as some may have expected.

The headlights are sharper and more in tune with other new Volkswagen vehicles, while the taillights are clearly more slimline with distinct pointy corners. The taillights also feature LEDs.

Other styling changes include a three-surface front end with a flat section at the front surrounded by two corner sections, like a hexagon. The lower centre fascia is also a lot more intricate and sophisticated compared with the Mk6. Lines are carried up and around the body too to give it a more upper class and fuller look. 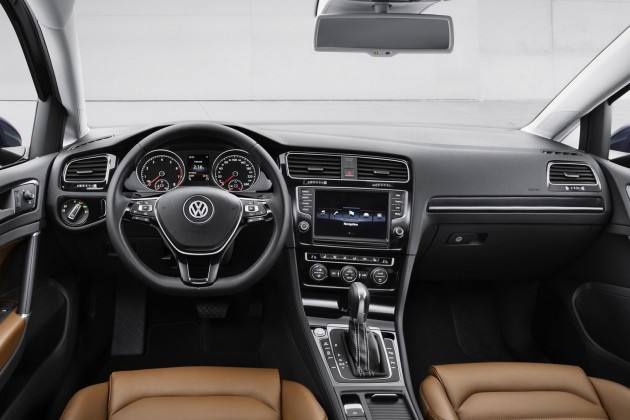 Inside, as previously shown in early leaked interior renderings, the Mk7 Golf interior is stepped up a notch in terms of quality. The most notable difference, visually, is the centre dash fasica which is slightly angled towards the driver, as opposed to the flat setup in the Mk6.

Powering the new Golf will be a range of turbocharged engines. Starting with a 1.2-litre TSI unit, it produces 63kW and offers a combined fuel economy rating of 4.9L/100km.

Next up is a new ‘EA211’ 1.4-litre turbocharged four-cylinder producing 103kW of power. Fitted with fuel-saving measures such as cylinder deactivation and direction injection, the 1.4 boasts a combined fuel consumption rating of 4.8L/100km.

For the diesel fans there will be two variants on offer, including a 77kW TDI and a 110kW TDI. These consume an average of 3.8L/100km and 4.1L/100km, respectively. A super-fuel-efficient ‘BlueMotion’ option is on the way too, offering fuel economy of just 3.2L/100km.

It’s unclear at this stage what combinations will make their way to Australia.

Details of the sporty new Golf GTI Mk7 are yet to be revealed, however, more information is expected at the Paris Motor Show starting September 29. As far as we know it will get a boost in power up to around 160-165kW from a similar 2.0-litre turbocharged four cylinder.

Prof. Dr. Martin Winterkorn, chairman of the board of management of Volkswagen AG, recently spoke about the new model, saying,

“Six generations of the Golf – 1974 to 2012. That represents 38 years of continuous success for the world bestseller with sales totalling 29.13 million cars. It has also made a tremendous economic impact, safeguarding jobs, and has served as an influential measure of technical progress over the epochs.

“We want to continue this success story in the seventh generation Golf. Although the new Golf is safer, more comfortable and spacious than the previous model, it is up to 100 kg lighter and – in the case of the new 140 PS (103kW) petrol engine that features cylinder deactivation and a combined fuel consumption of just 4.8L/100 km – it is up to 23 per cent more fuel efficient.”

The 2013 Volkswagen Golf Mk7 is set to arrive in Australia during the first half of next year, after making its public debut at the 2012 Paris Motor Show at the end of this month.