You may remember a previous report which spoke of the new 2013 Nissan GT-R getting a boost in power, Kazutoshi Mizuno has now hinted the new car will be quicker around the famous Nurburgring Nordschleife by up to ten seconds. Details were revealed at recent pre-launch event held at Silverstone circuit in the UK. 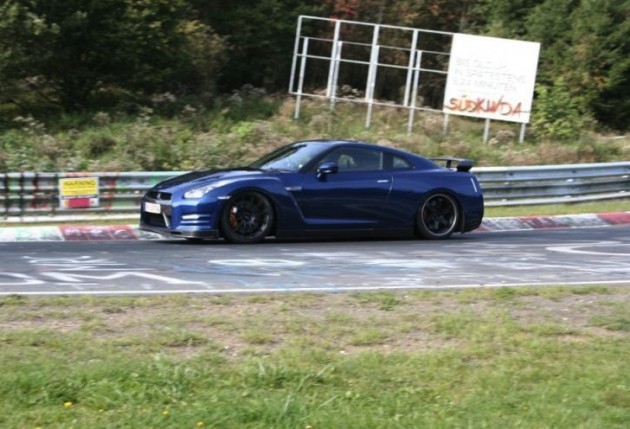 Speaking with PistonHeads at the event, Nissan GT-R chief engineer Kazutoshi Mizuno openly spoke about how much quicker the new 2013 Nissan GT-R version will be around the Nurburgring. He said that the new version reaches 296km/h on the track’s main straight, up 5km/h on the current model, and up to 8km/h faster in the corners.

Mr. Mizuno also said that the new model will be up to 10 seconds quicker around the circuit, but quickly changed the prediction to eight seconds to be on the conservative side. This is going to be one super-quick beast either way.

The quicker and faster track time is thanks to a revised engine that develops around 410-420kW, slightly down from the initial speculation of 425kW. However, even if it is 410kW, it’s still a fair shove along from the current model’s 390kW.

The 2013 Nissan GT-R will also feature improved aerodynamics, particularly in the front end, while the suspension will be changed to an asymmetric setup to better balance weight in right-hand drive versions. Chris Harris from EVO attended the special 2013 Nissan GT-R pre-unveiling event at Silverstone. He summed up the suspension changes saying,

“The GT-R’s transaxle gearbox sits just to the right of the main propshaft, which means in right-hand drive form it carries 50kg too much corner weight on that side of the car.

“This has been addressed by adding spring rate and damper support to the right front of the car, and removing it from the front left. The actual pivot position of the respective sides has been adjusted too.”

Other highlights of the 2013 Nissan GT-R will include a optional track pack which will give the car revised suspension components and more aggressive bucket seats, as outlined by Chris Harris,

“There will be a track pack option in right-hand drive markets this time. That makes the car a two-seater with grippier buckets, a brake cooling system that’s claimed to reduce rotor temperatures by up to 100 degrees, plus new springs and adjustable dampers.”

Interestingly, Kazutoshi Mizuno left PistonHeads with a rather intriguing quote:

“The GT-R is a two door coupe with a very big boot. Use your journalistic skill to imagine what might be next.”

PistonHeads suggested a possible convertible version in the pipeline, but we’re thinking more along the lines of a possible sedan. With Mr. Mizuno coming across with a general ‘cabin space’ theme, mentioned that it’s a ‘two-door coupe’ with a ‘big boot’. What do you think Mizuno meant by this?

Full details of the 2013 Nissan GT-R will be unveiled next week.