The new 2013 Kia pro_cee’d GT will be Kia’s first proper attempt at the sporty hot hatch segment when it hits overseas markets later this year. Images of the new model have only just been revealed, ahead of its official unveiling at the 2013 Geneva Motor Show in March. 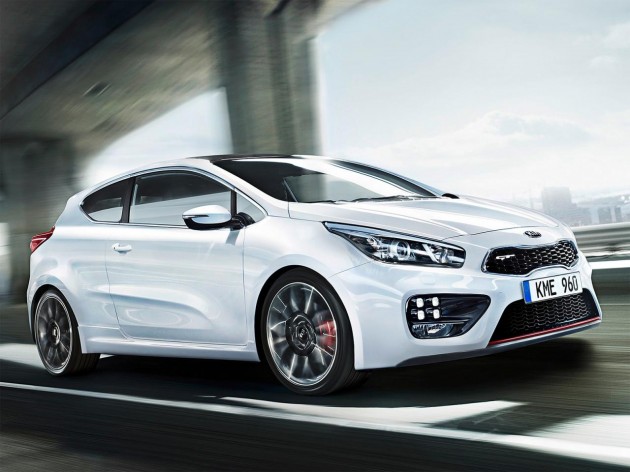 Featuring a similar running gear to the current Hyundai Veloster SR Turbo, including the 1.6-litre turbocharged four-cylinder with direct injection (GDI), the pro_cee’d GT will produce around 150kW and 265Nm.

The engine is capable of propelling the hatch from 0-100km/h in 7.9 seconds, with help from a six-speed manual transmission.

To make sure the sporty two-door stops and turns as eagerly as it goes, there’s a set of 300mm front disc brakes and 262mm discs on the back, meanwhile behind the 18-inch alloy wheel package the GT also gets sports suspension with firmer springs. 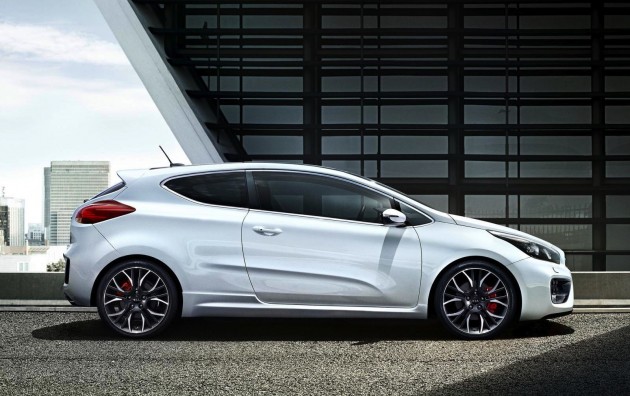 On the outside, the GT features a more aggressive bodykit compared with the normal pro_cee’d, with a sharp front end and lower spoiler, some matching side skirts, and a revised rear bumper bar. A black roof completes the look and matches the black mesh grilles at the front.

Inside follows the same theme, with Recaro bucket seats and aluminium pedals and highlights completing the package.

Production of the GT is set to commence by mid year. There are no plans for an Australian introduction at this stage, although, the local arm is said to be considering it.