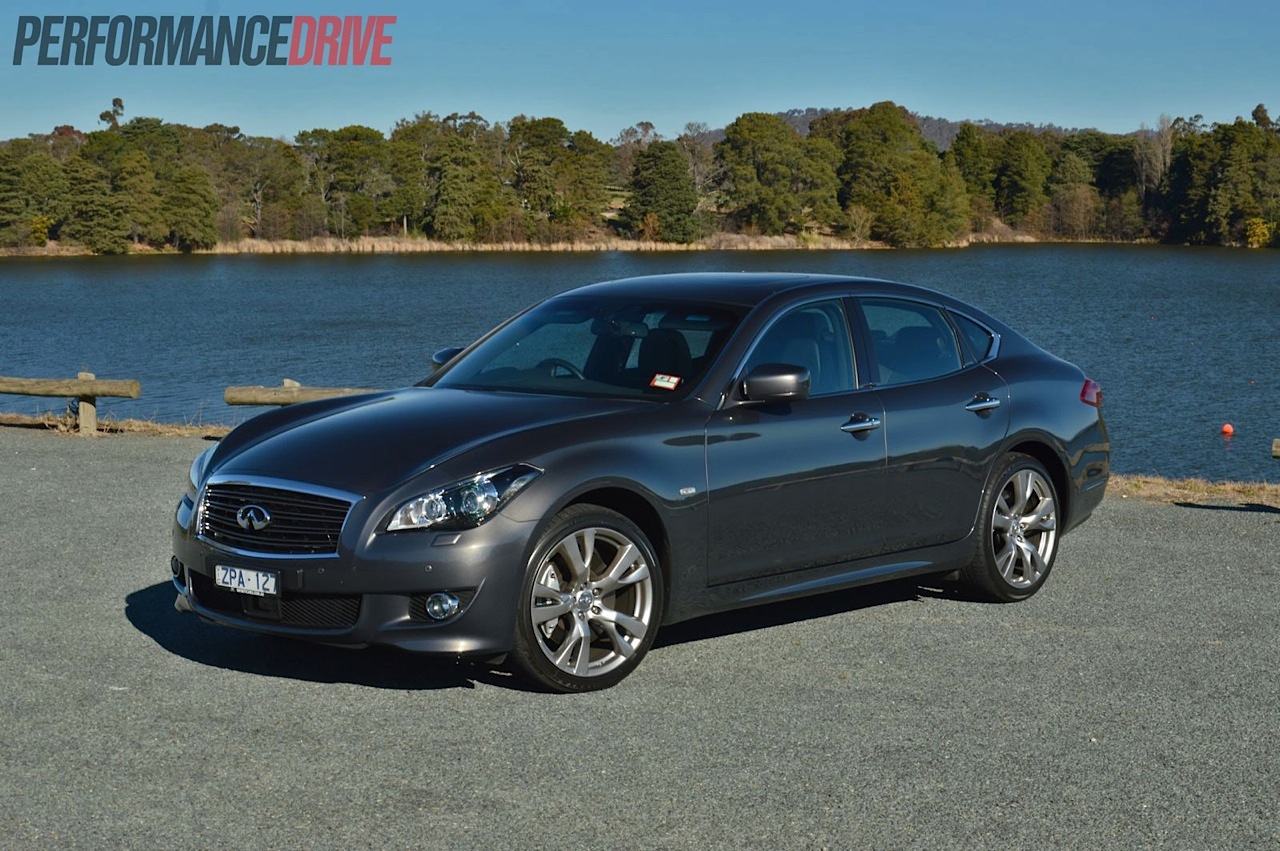 If you’re in the market for a large executive turbo-diesel sedan, you might want to take a look at this new proposition from Japan. Promising class rivalling prestige and quality, the 2013 Infiniti M30d S Premium could be the ‘something different’ that you’ve always wanted. 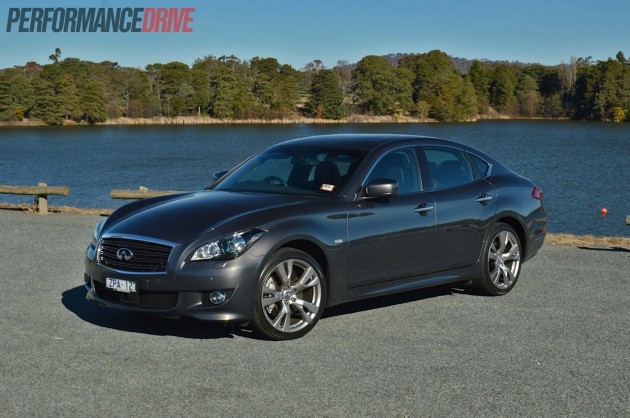 For years the Germans have led the way in the large luxury sedan segment, particularly diesel sedans. But now it seems the Japanese are more than catching up with cars like the new Lexus GS, and this, the Infiniti M sedan.

It’s available with a variety of powertrain choices, including a naturally aspirated V6, a hybrid V6 – also know as the quickest hybrid currently on sale (pending the arrival McLaren P1) – and a turbo-diesel.

The diesel is the only Japanese turbo-diesel large luxury sedan currently on sale. The Japanese don’t usually do turbo-diesel, at least for the Australian market. This makes the M30d quite a unique package.

Power comes from a double overhead cam 3.0-litre V6 producing 175kW and 550Nm. It’s matched up to a slick seven-speed sports automatic gearbox which distributes power to the rear wheels.

Infiniti recently announced huge price cuts for its local range as part of the second phase of the brand’s Australian introduction. Original prices were rather steep, and in some cases, higher than some of the veteran rivals. Now though, all models sit in the market at much more competitive and therefor more appealing levels. 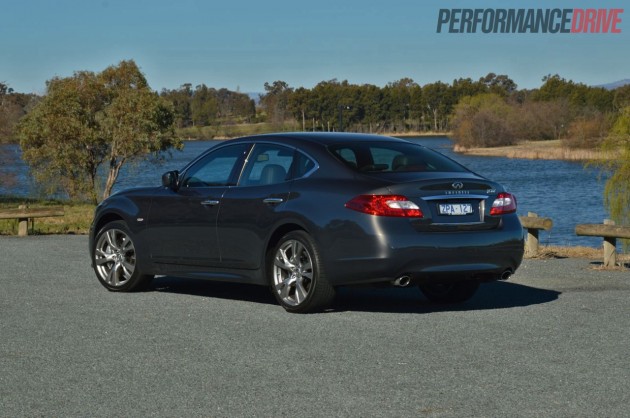 If you’re unfamiliar with the Infiniti brand, it’s perhaps best known for its involvement in Formula One and the championship-winning Red Bull Racing team. Although the road cars aren’t built in the same factory as the F1 race cars, obviously, a lot of technology does trickle down – F1 champ Sebastian Vettel is even assigned as Infiniti’s ‘director of performance’.

The brand is owned by Nissan and was originally set up for the US market, so you could say like Lexus is Toyota’s premium arm, Infiniti is Nissan’s. Basically, what this means is every Infiniti is filled with lots of fine attention to detail and high quality furnishings.

There’s certainly a premium ambiance that inhabits the cabin of the M30d, with plenty of brushed aluminium, black lacquer, and stainless steel and chrome infused into most of the dash. There’s also a graphite roof liner and lashings of leather. It’s all very cool, like it belongs to James Bond.

Most of the in-car design and layout is starting to age now, having been around since 2010 in overseas markets. However, the interior did pick up Ward’s Auto Interior of the Year award in 2010. It seems to be ageing, but ageing gracefully.

Upon initial inspection, peering at the dash can be overwhelming. While today’s luxury cars are more about clean, clutter-free environments, back three or four years ago, the more buttons meant the more modern.

There are heaps of buttons to play with in the M30d, and they all have a distinct soft touch click about them. Most of them point you to various places within the eight-inch LCD multimedia interface. Some functions are easy to fathom while others, such as the ‘Forest’ mode, are a little different to what you might be used to. In this case, the forest button is a mode of the climate control which wafts out purer, cleaner air.

Entwined in the interface is a superb 16-speaker Bose ‘Studio Surround’ sound system. It sounds fabulous. It sounds like you’re inside the studio as the recording happens. Whether you like rock music, jazz or classical, or dance music, the setup will not let you down.

Infiniti has made a great move by enlisting the help of Bose for its sound systems. It seems fitting for both brands. As you would expect, the stereo offers complete adjustabilty with speakers in every corner of the cabin, including right next to your shoulders on the front seats.

The entertainment unit offers DVD playback, a 10GB on-board storage drive, satellite navigation that’s actually easy to use – unlike some systems out there – and support for all of the common media formats. It’s controlled via a rotary mouse-like control knob on the centre fascia. 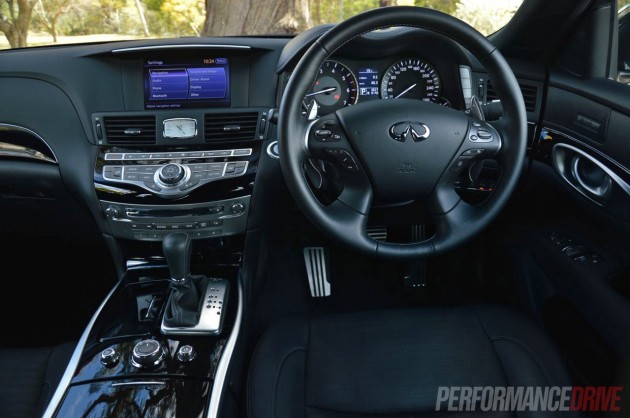 Comfort is one of the M30d’s fortes. You can immediately recognise Infiniti’s roots; the front seats are huge, suiting the US market. They do provide ample support as well, with thick yet soft hip bolsters.

You sit quite low in the cabin, in all seats, while the driving position is satisfyingly sporty. It reminds you that you’re driving a prestige sports sedan and not your average commuter. The front seats are power adjustable, and all are wrapped in leather with perforated sections to allow the heating and cooling functions to breathe.

Interior space is quite accommodating, with segment-matching front headroom and legroom. Rear seat space is also abundant, with a big centre flip-down armrest making for a comfortable four-adult cruiser. The middle seat is slightly more confined, as with most vehicles.

For those business trips on the road, luggage capacity is 450 litres. This doesn’t compare extremely well against the market rivals, but it’s capacious enough to swallow a load of luggage and some golf clubs. The main rivals offer the following boot space: Audi A6 (530L), BMW 5 Series (520L), Lexus GS (530L), and Mercedes-Benz E-Class (540L).

As for safety, the M30d wears more than its obligatory high-visibility vest. It comes with Blind Spot Warning and Intervention, Lane Departure Warning and Prevention, Intelligent Cruise Control with a very good radar guided system and auto braking, Intelligent Brake Assist, Forward Collision Warning, and Distance Control Assist. Essentially, you’re getting all of the latest cutting edge technologies that are available in the auto industry at the moment, all designed to keep occupants as alive as possible. 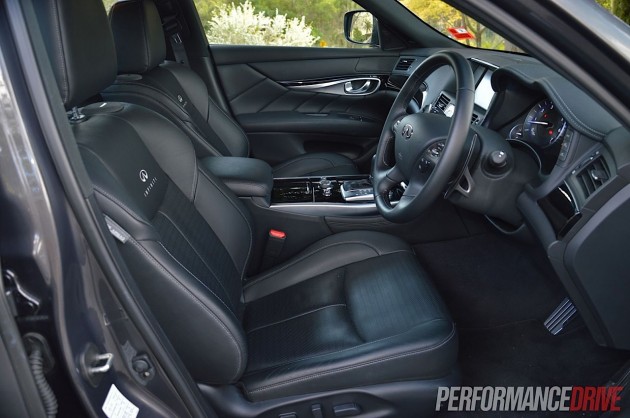 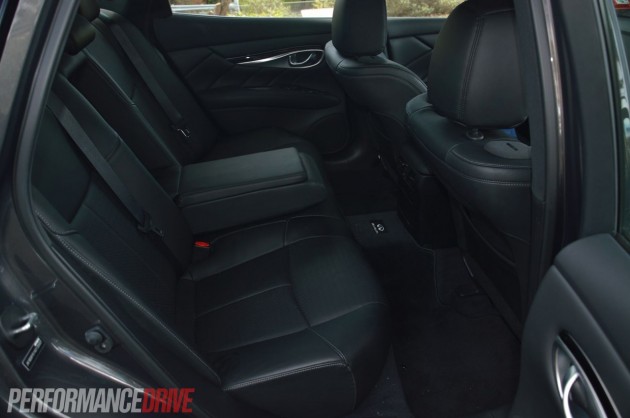 Pitching up against some of the best driver’s sedans in the world, the M30d needs to offer the driver a special connection. Upon initially taking off, you can feel a definite seriousness to the car’s character. It feels really solid out on the road, and gives you a reassuring degree of security and confidence in the car. It makes you feel safe, which is an important factor to many buyers.

Although perhaps not as nice or a responsive as the BMW 5 Series or Mercedes-Benz E-Class in terms of handling, there’s no questioning the eagerness of the steering in the M30d S Premium. The steering is sharp and focused, taking you exactly where you direct it. This is mainly thanks to a class-exclusive four-wheel active steering (4WAS) mechanism (S Premium only) which helps the car pivot around corners.

It doesn’t take much steering lock to tackle tight bends. And when you do tackle some bends, the sports suspension keeps the platform very flat and roll-free. If you push on with considerable aggression, there is some delay in feedback through the wheel as the weight and subsequent momentum is shifted.

It feels like it wants to push understeer. It doesn’t though, instead, gripping onto the tarmac with good stability. It’s not the most engaging vehicle in this segment while driving in an up-beat tempo. It lacks some of the commitment of the BMW, and it’s not as spirited as the Lexus GS. We put this down to the weight (1826kg), or, more specifically, the management of the weight.

Out on the highway the heavy, planted character is highly welcome. Again, it feels ultra-secure on the road, and aerodynamically cuts through the air with no wind buffeting whatsoever. We were quite amazed. It won’t change lanes on you at the next gust of wind or wander if you’re overtaking a truck at speed.

To give the car maximum versatility, Infiniti presents the driver with four driving modes in a system called ‘Drive Mode Select’. Using a toggle switch, steering and throttle sensitivity are altered to suit. You have Standard, Snow, Economy, and Sport modes to choose from. Each setting is noticeably different.

In Sport mode, the car is at its most energetic. The steering is quick and the transmission holds onto gears for a while before upshifting. The transmission does seem to lag a little bit. We’re not sure if it’s turbo-lag or driveline lag, but there is some hesitation between throttle depression and forward shove. Using the paddle shifters does seem to help as you can tell the brains of the transmission when to do the upchanging or downchanging, better preparing you for the conditions ahead.

As for the engine performance? It’s great. There’s a huge surge on take off as 550Nm rushes in from just 1750rpm. From there, the V6 pulls strong and sounds decent doing it. It sounds like a growling petrol V6. Full throttle results in 0-100km/h in a competitive 6.8 seconds (as tested).

Almost contrary to the dashing performance, fuel economy is also very good. We averaged just 8.8L/100km during our real-world test, which means 900km from an 80-litre tank is easily achievable.

Like the G37 coupe and convertible tested earlier this year, Infiniti isn’t stuffing around when it comes to braking aptitude. The M30d features 320mm discs with big twin-piston calipers on the front and 308mm discs on the back. They bite hard and pull up the hefty sedan time and time again, with no fade or pedal drop tarnishing the experience or their ability. 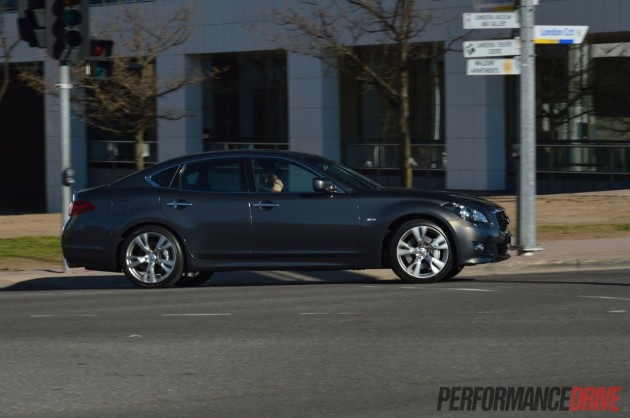 It’s an impressive car. If you like fresh, modern exterior designs that tend to attract the gaze of passersby, the M30d is an enjoyable package. It is something different to the otherwise conservative German sedans, and it brings a very similar level of technology and efficiency. While the interior is starting to age it does come filled with all of the modern conveniences available in this segment.

Dynamically, from a pure driver’s car perspective, it just falls short compared with the BMW and Lexus in our opinion. It is right up there among the rest though. Instead, if luxury and elegance, and technology for that matter, is higher on your car shopping criteria, the Infiniti M30d S Premium is well worth a test drive.

Australian customers may have been a bit hesitant delving into a new brand, but now that prices have been slashed it should be more tempting than ever. 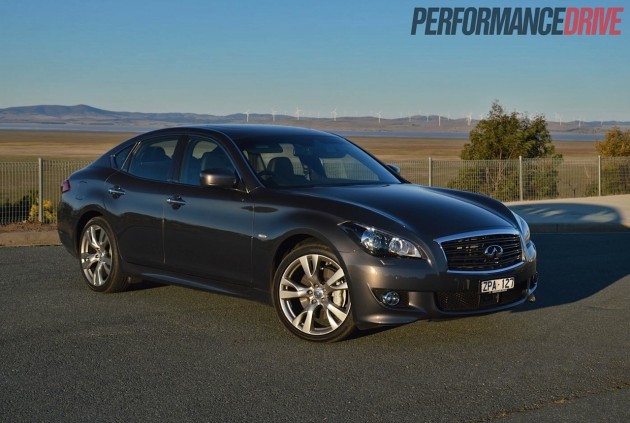