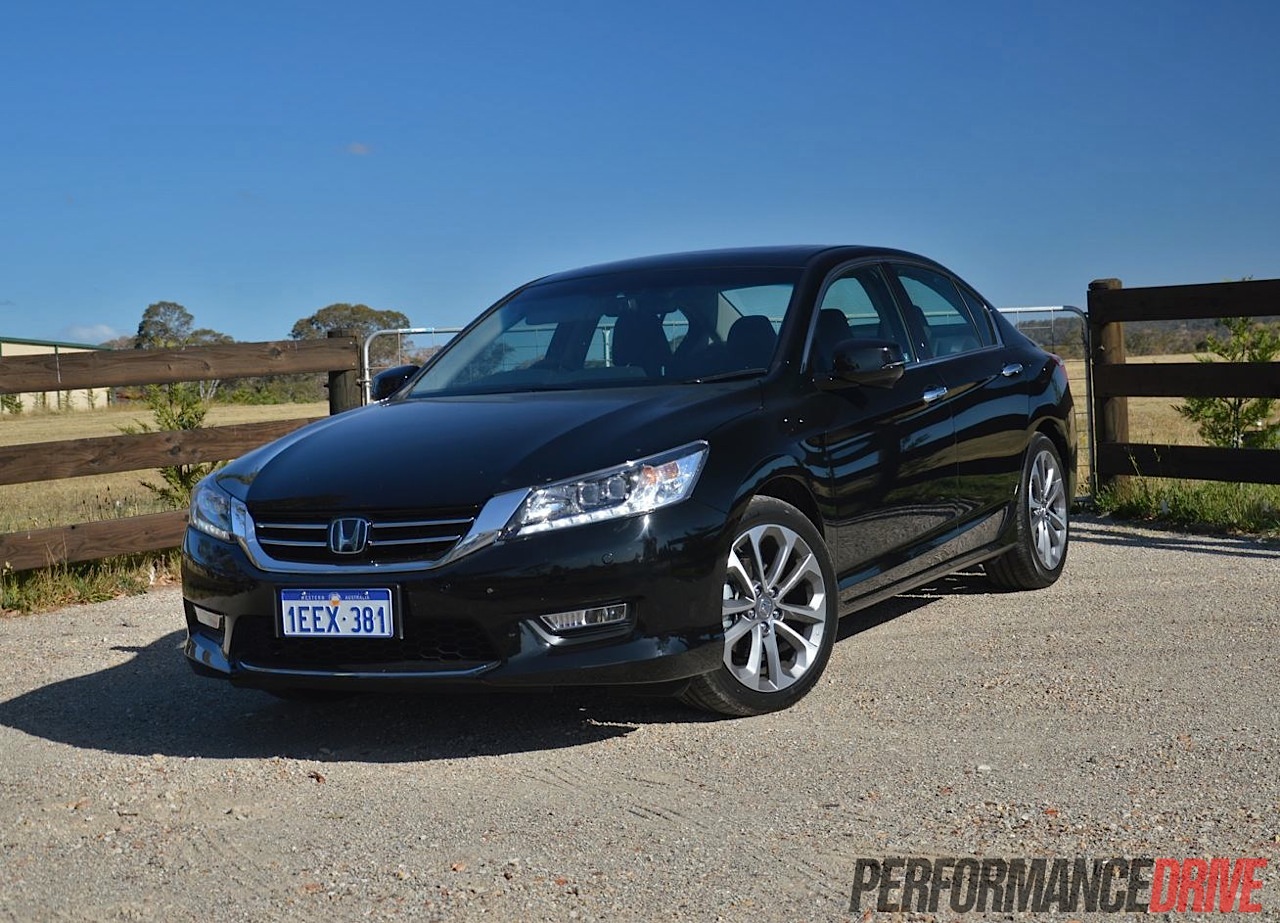 You’d probably yawn if you saw one of these drive past, if you even noticed it. In terms of styling, the 2013 Honda Accord V6L is probably the most generic-looking car out there. However, it is the company’s flagship model, and, since the departure of the Opel Astra OPC earlier this year, the Accord V6 sits as the most powerful front-wheel drive car currently on sale. 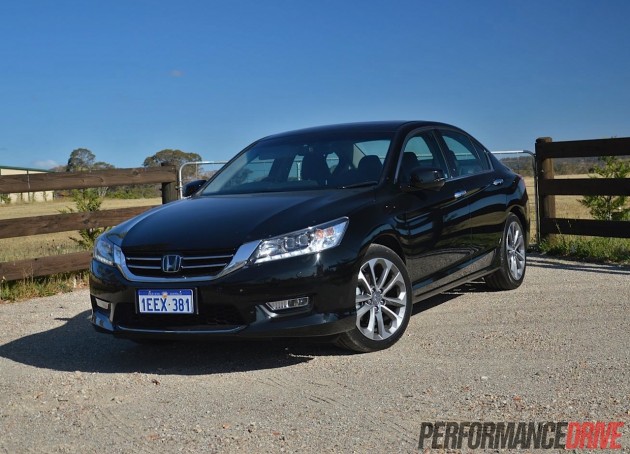 Being Honda’s eminent model, the V6L is a bit of an exhibition for the company’s latest and greatest technologies. Some interesting developments should certainly cause rivals to peek over the fence and take a little gawk, with features like a class-first blind-spot camera, a multi-angle parking camera, and an adaptive cruise control system with automated steering that’s capable of driving the car all by itself… well, for up to 30 seconds anyway.

It also comes with the only six-cylinder in the range, consisting of a 3.5-litre naturally aspirated unit producing 206kW and 339Nm. The V6’s sophisticated yet raspy pulse is sent through a six-speed automatic and directed into a front-wheel drive system.

For a luxury car, the starting price is an especially attractive one, kicking off from just $51,990. With the level of equipment and technology on offer, there aren’t many other cars that are able to represent this much value for money. 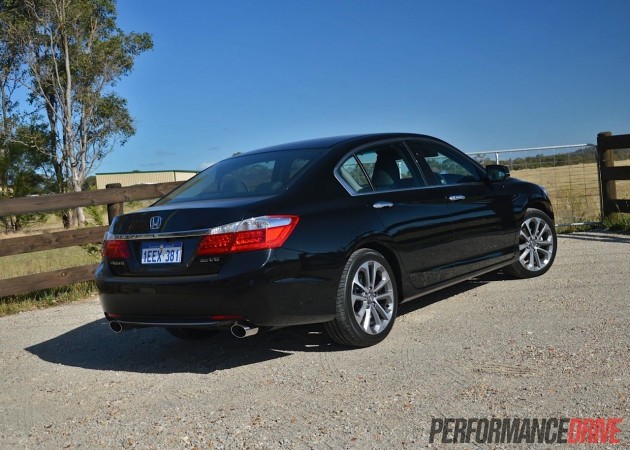 Honda’s history in developing clever thinking and advanced technologies is an extensive one. The company has the expertise to create new class benchmarks. And with the latest Accord, or at least this top-line V6 model, that’s exactly what it is striving to do.

There are heaps of luxury appointments that you’d expect on a car of this nature, that are fitted as standard here. However, the Accord stands out with a number of interesting appliances. Active Sound Control and Active Noise Control (ACN) are one such outside-the-square slice of innovation.

What this does is capture low-end drivetrain frequencies and sends a message to the ACN unit, which then creates perfectly-timed reverse-phase audio signals for an amplifier. A subwoofer on the rear parcel shelf and speakers in the doors then cancel out noises to leave a whisper-quiet cabin. From the moment you shut the door the Accord interior is extremely calming and peaceful, even with the engine running.

For the first time ever in a production car the Accord showcases a very smart blind spot monitoring system called LaneWatch. It’s one of those ideas that makes you think, ‘why don’t all cars come with this?’

Attached to the bottom the passenger-side mirror is a high-resolution camera. The instant you hit the left indicator stalk the image from that camera is displayed onto the upper of the two LCD screens on the dash, giving you a clear view of everything in your blind spot. It’s great not only for protecting you from accidentally merging in front of someone, it’s also very useful during left-hand turns to avoid bicycles and pedestrians. There is a button to switch the function off if for some reason it annoys you. 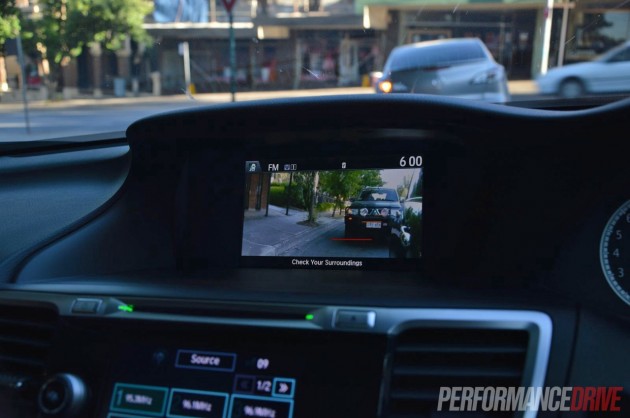 The Accord V6L also comes with a comprehensive driver safety program called Advanced Driver Assist. It includes adaptive cruise control with auto brake and lane-keeping assist with semi-automatic steering. In a nutshell, it is the best cruise control system we’ve ever come across, without question. It’s brilliantly in-tune with the live surroundings, and it’s capable of actually driving the car itself for short periods.

Unlike other vehicles fitted with lane keeping tech (automatic steering), the Honda constantly adjusts steering input, dialling in fractions of lock to keep the car in the middle of the lane. Other systems simply wait for the car to verge over near the lane markings before nudging the steering and car back into place, and then again, and again – a bit like playing ten-pin bowling with the side bumpers up, apart from all the contact of course. In this, it’s continuously adjusting, like a human.

Despite the excellent and very advanced safety gadgets, Australia’s ANCAP safety gurus have crash tested this latest model and given it a rating of 29.21 out of the standard 37. This means it’s only eligible for a four-star rating.

Aside from the helpful tech, the cabin has a clean, filtered, high quality aura to it. It’s not the most exciting as far as design and decor go but it’s probably one of the easiest to live with and understand. All control surfaces offer a nice soft touch and movement, and trimmings fit tight with no rattles or squeaks to bother any of the passengers.

Front and rear headroom and legroom is plentiful, with an airy atmosphere helping to relax the occupants as much as possible.

Boot space is also commendable at 457 litres, comparing well against its main rivals. The floor is flat in the boot and perfect for lowering the week’s shopping into. It is a little high though due to the full-size spare wheel underneath – a tradeoff most are probably willing to accept. 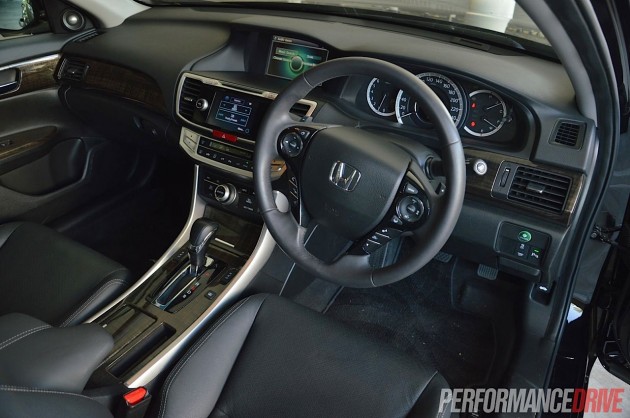 Strangely, the iVTEC V6 uses single overhead camshafts. Honda is renowned for creating high-tech, high-revving, and highly efficient naturally aspirated engines, so for this to use single cams instead of double on each bank it does seem a bit backwards. Regardless, all of the above traits remain in place.

The V6 loves to roar and howl its way to redline in true Honda form. Stamp on the throttle from a standstill and it will shift abruptly off the line in a chirping frenzy. From there, second gear is brought in and before you know it you’ve hit the national speed limit. We timed 0-100km/h in an impressive 6.5 seconds, which is quite quick for this segment.

Fuel efficiency is also superb. We managed around 600km from the 65-litre tank without going to complete empty, translating to around 9.4L/100km according to the trip computer. The official rating is 9.2L/100km.

The engine is really quiet and refined, with effortless highway cruising. If a car could be likened to a genre of music, this would be contemporary classical or jazz with the ability to break out into high-tempo dance music.

It might be the most powerful front-wheel drive currently on sale, but it is not the most rewarding or the most enthusiastic when it comes to cornering. Turn-in is sharp with relatively quick steering, but from there it feels like it wants to pack its bags and escape back to the world of straight roads.

It doesn’t have the grip it deserves. It does have 235-wide tyres but pressing on only moderately will cause them to moan for traction. There’s also a little bit of kickback through the steering wheel upon corner exit; with the lack of a clever differential, you can’t really use the engine power to pull away from corners. What you’re left with is mild yet uninspiring understeer.

We’re afraid things don’t get much better when you jump on the brakes. The Accord is obviously no sports car, however, during our routine test drive which involves driving up and then down a tight mountain road, the Accord brakes overheated quite badly and rather too soon into the trip in our opinion.

We’ve tested all vehicles along the same route, including standard ones such as the Toyota Camry, and no brakes were as unprepared for the task as the ones on this. Initial bite is powerful and it pulls up with ease. Repeat it a few times and things start to deteriorate. If it’s any consolation this test car may have had a hard time in a previous life with another journalist, potentially causing premature overheating.

For what this car is meant to be, it’s pleasant before enjoyable; accommodating before inspiring; and intelligent before witty. It doesn’t have a sense of humour, but it does have a sense of sincerity and goodwill. It wants to get you to your destination using as much intelligence as it can muster without getting too complex about it.

As a plush highway consumer, it’s very pleasant and relaxing. The ride is soft and the steering is ultra light. Vision all around is very good as well, and the driving position feels natural and ergonomic. 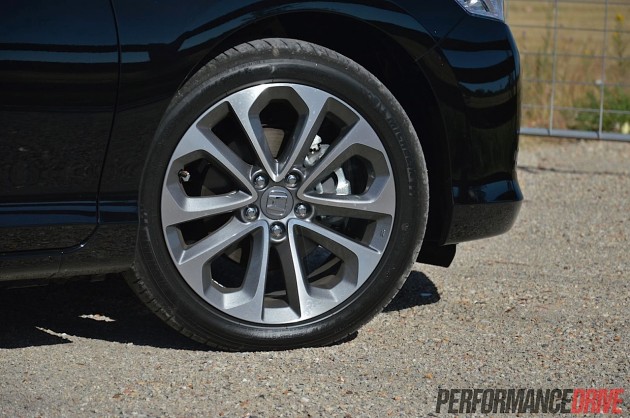 Although the engine is potentially one of the best mainstream V6s around in terms of excitement and efficiency, it’s not what makes this car. Without beefier brakes and more enthusiastic handling and suspension, the engine isn’t completely utitlised on this otherwise high quality yet soft luxury-focused car.

Overall, it’s a blend of innovation and comfort, with a hint of Honda’s fanatically precision and attention to detail. The best part has to be that starting price. No other car in this segment is able to better or even match this for sheer packaging and luxury. 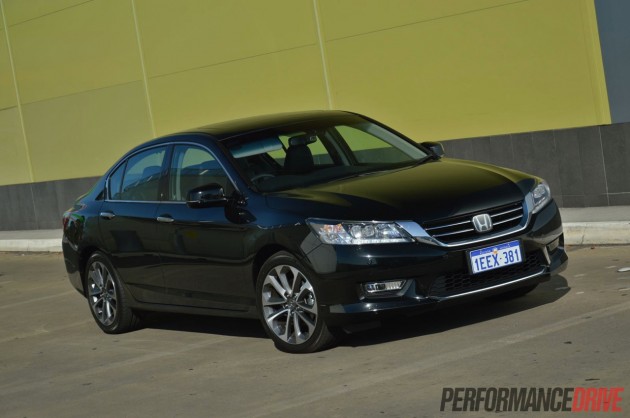