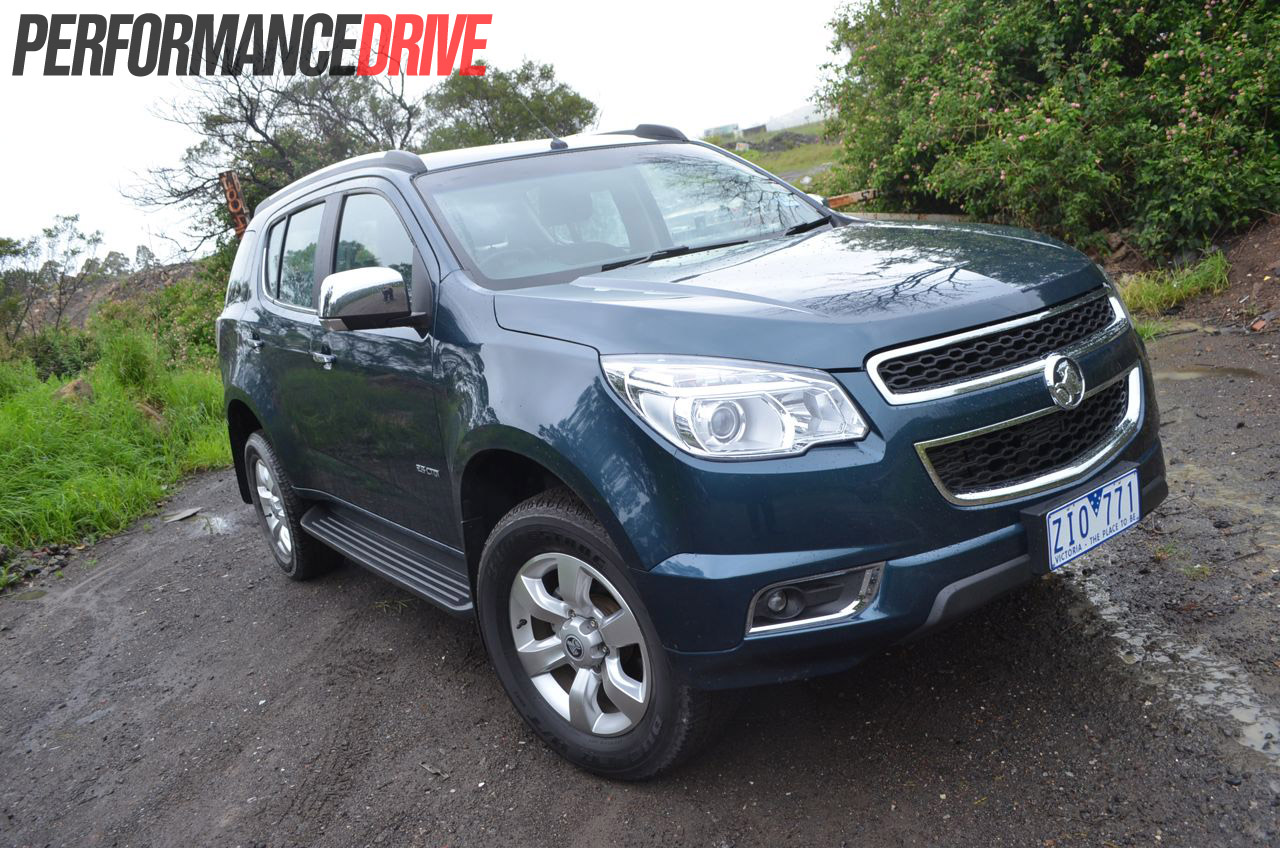 Meet the 2013 Holden Colorado 7 LTZ. It’s Holden’s new full-size 4×4 seven-seater SUV. Whether you need a vehicle this large to tow a boat, or hoard around an army of kids, the Colorado 7 should be on your shortlist. 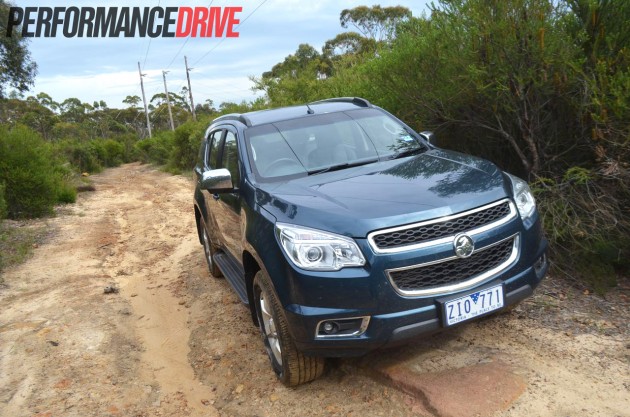 The Colorado 7 was first previewed in the flesh at the 2012 Australian International Motor Show in October last year. It’s now on sale, and buyers have a choice of two trim levels, starting with the LT, priced from $46,990, and the top flight LTZ (as tested), priced from $50,490. 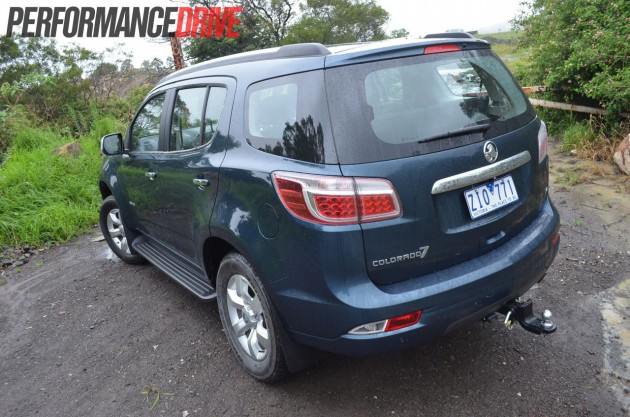 Both models offer seven seats and share the same four-wheel drive running gear. They also get a 132kW/470Nm 2.8-litre common-rail turbo-diesel engine matched with a six-speed automatic, with a two-speed transfer case (switchable between 4×4 high and low range). There’s no petrol engine or manual transmission option. 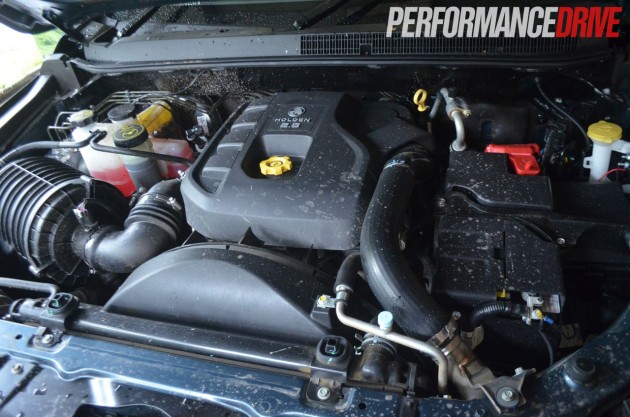 The body-on-frame architecture, five-link live axle rear suspension, and independent double wishbone coil spring front suspension give insight into how capable this 2120kg SUV is. The Colorado 7 is also built with nine cross-members to create a significant amount of torsional stiffness.

Jumping in the 4×4 Colorado you’re greeted with a spacious cabin that has pockets and storage spots for just about everything you could ever want to keep in your car. The driving position isn’t as natural as we would have liked, leaving you feeling like the seat should perhaps be a little lower to the floor.

The front seats lack lateral support when cornering, but they are definitely kind on the behind. We sat in every one of the seven seats, and we’re happy to report that the second row is more than comfortable, and the third row has enough room to easily fit a set of adults, making the ‘7’ a true seven-seat vehicle. 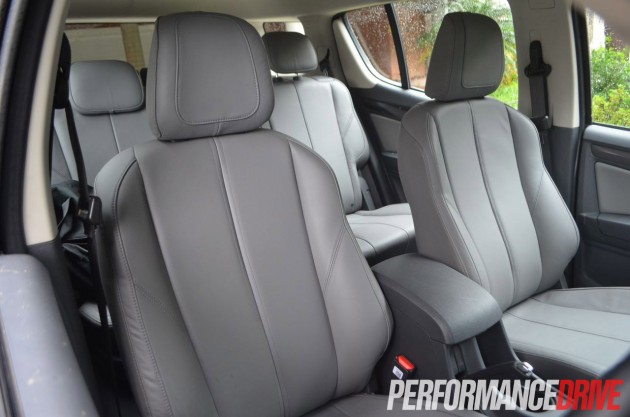 The ice blue illumination on some of the centre stack’s dials and buttons is a little bit 90s for our liking. And after testing the Colorado LTZ ute a while back – sharing the same dash – we still don’t like the big central button layout. It’s a little too Star Trek. That said, it’s easy to find your way around the climate and audio settings.

To our surprise, the stereo system is actually very capable. The acoustics seem to work for the big 7 4×4. The treble is clear, and the bass is definitely strong; pick any song and chances are you can crank it right up without any distortion whatsoever. The stereo is MP3 compatible, and has USB, aux-in and Bluetooth connectivity.

If storage is something you look for in a car, the Colorado 7 has something like 30 storage spaces for all sorts of stuff. For instance, there’s a lower glove box and upper glove box, front seat pockets, rear seat pockets, and an upper centre box compartment, just to name a few. 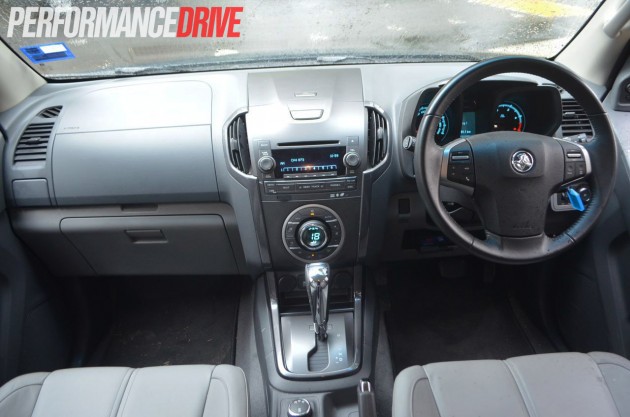 Useful things like two 12V power sockets at the front help, and rear air-conditioning controls located in headliner along with four vents for the second and third-row seats go to show the manufacturer had passengers in mind. 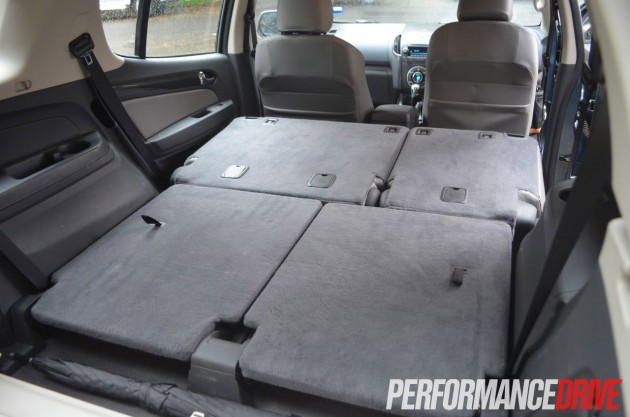 Also, for those who really value cup holders, we’re happy to tell you there’s no less than two per row of seats, so six cup holders in total. The front door cards also have drink bottle holders.

There’s a load of options available for the big Holden, useful things too, such as a steel bull bar, a driving lamp kit, nudge bar, tow bar kit (very useful considering the 7 can tow up to 3000kg), rubber floor mats, cargo net, first aid kit, and a snorkel kit for when you want to plow through a creek crossing.

The rear styling isn’t the best deriair we’ve ever seen. It kind of makes the SUV model appear like a bit of an afterthought, but we can forgive the rear styling by focusing on the front. 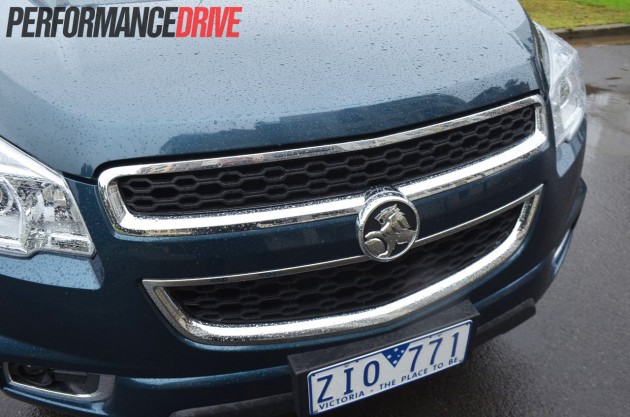 Side steps are integrated to make entry and exit from the tall cabin as easy as possible. They also aid in protecting the car from any surface debris that might flick up. 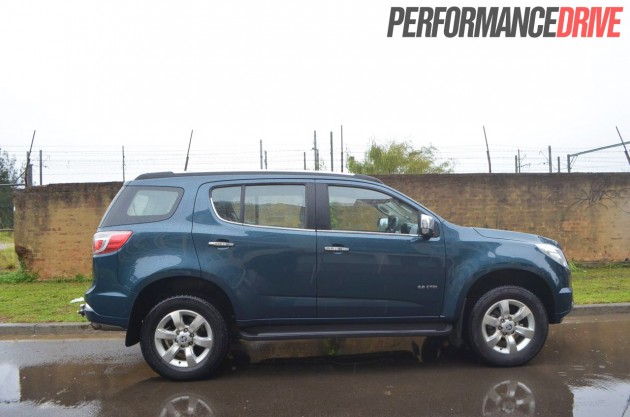 With a tall first gear, the big Colorado 7 launches off the line without any hesitation. The six-speed auto changes up smooth and direct, but kick down can become a little delayed at times, especially when you need a quick burst of acceleration. But its overall operation is certainly effective.

Much like in the Colorado 4×4 ute, the 2.8-litre diesel engine fires up and does its job well. With 470Nm available from 2000rpm, all you have to do is rest on the throttle around town to move all 2120kg of it. 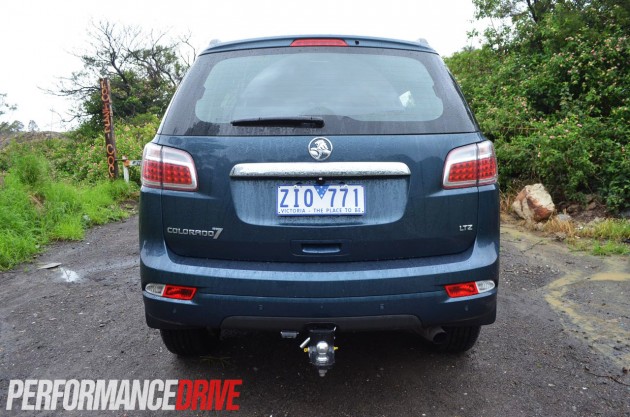 We drove the 4×4 with and without passengers, and the ride definitely improves when you have a few passengers buckled up. When driving it alone the body can bounce and bob around a little over rough surfaces, but with passengers it remains a lot more compliant.

Cornering efforts in the big rig aren’t too bad for a car with large tyres and a high centre of gravity. Initial turn in is good, but is followed by lots of understeer if you suddenly mistaken the Colorado for a Clubsport. 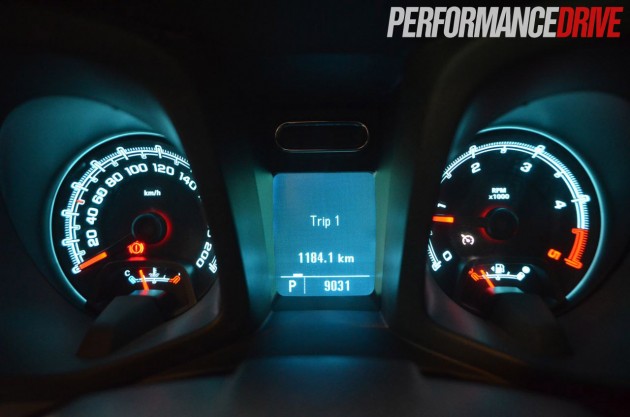 Braking-wise the Colorado 7 has no problems pulling up under hard braking, albeit with a slight bit of nose dive action. Given it has a 3000kg maximum towing capacity, the stoppers feel like they can deal with repeated abuse under heavy load.

For a big SUV, the Colorado 7 returns reasonable fuel economy. We averaged 11.1L/100km during our test, returning around 700km per tank, and costing about $115 to fill (estimated cost of $1.50 per litre). It’s not bad for a vehicle of this size.

For the initial part of our off road test we left it in rear-wheel drive. Trekking up through some rocky, dusty ruts, the factory-fitted limited-slip diff felt tight and worked effectively, offering lots of grip.

As the ruts got deeper, we selected 4×4 high-range via the rotary switch in the centre console. The chassis felt tight as we climbed over large rocks. Mechanically, the four-wheel drive system never struggled to keep the Colorado pointed in the right direction. 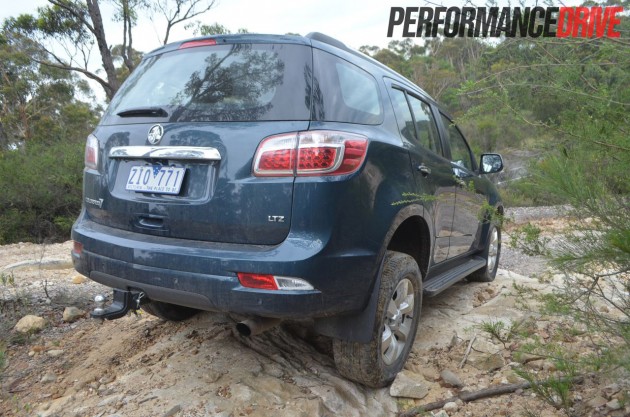 Switching into low-range 4×4 (2.62:1 ratio), we pointed the 4×4 at a series of steep hills laced with step ups and loose rocks and dirt. The 7 climbed well, but we couldn’t help but notice the tyres were letting its off road capability down. Serious 4×4 enthusiasts should look to replace the tame factory-fitted tyres with something a little more aggressive.

Climbing downhill we found the Descent Control System effective at keeping the car in line and composed. However, as we started to clam over some muddy mounds, the stability control and traction control started going haywire, intruding and interrupting the car’s go-forward ability. With those systems turned off, the big SUV got on with the job more smoothly.

The Colorado’s maximum front approach angle is 30 degrees and the maximum rear departure angle is 22 degrees, with ramp breakover angle of 22 degrees. These figures are pretty good for a big family off-roader. 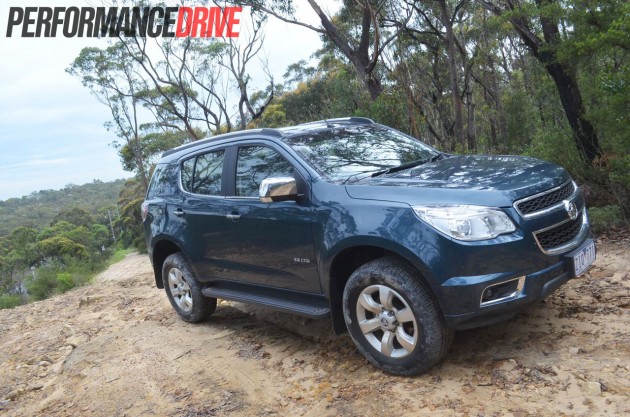 The LTZ model enjoys a 12mm overall height difference over the base LT model; who knows, 12mm might just make all the difference between getting stuck, or pushing through.

Off road the side steps are a bit of a bitter sweet situation. While they help guard against damage from surface debris, they can hinder the car’s off road performance when climbing mounds, digging into the dirt and scrubbing on rocks.

While it might not be as refined as some of its competitors, the Colorado 7 has a robustness to its drivetrain and interior that should appeal to those who actually plan on using their seven-seat SUVs for what it was intended for; heavy towing; going off road; and carrying seven passengers.

Priced from $46,990, the Colorado 7 is definitely going to have a few families signing up. 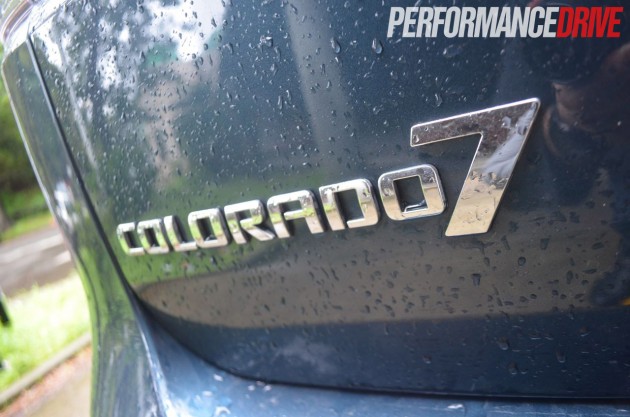 Ford Territory Titanium – 2.7-litre turbo-diesel six-cylinder, 140kW/440Nm – 2109kg – $58,060
Based on the Ford Falcon, the Territory is not only an SUV, it’s also the only Falcon wagon on sale. It comes in rear-wheel drive and four-drive, with decent petrol and turbo-diesel offerings.

Hyundai Santa Fe Highlander – 2.2-litre turbo-diesel four-cylinder, 145kW/436Nm – 1968kg – $49,990
The Santa Fe might not be a serious off road vehicle, but it does have decent ride height to tackle mildly rugged terrain, and it also offers seven seats and loads of standard kit in the Highlander model.

Mitsubishi Challenger XLS – 2.5-litre turbo-diesel four-cylinder, 131kW/350Nm – 2106kg – $55,290
The Challenger might be the first SUV you think of when it comes to seriuous off roading, however, with a heavy duty Triton platform underneath, it’s, in our opinion, one of the most capable family machines out there.

Toyota Kluger Grande – 3.5-litre V6 (petrol), 201kW/337Nm – 1955kg – $60,990
There’s no diesel option in the Kluger, so fuel-efficiency and torque is down compared to some of its diesel-powered seven-seat competitors. That said, it’s certainly a handsome looking SUV that has Toyota’s reliable blood running through it.