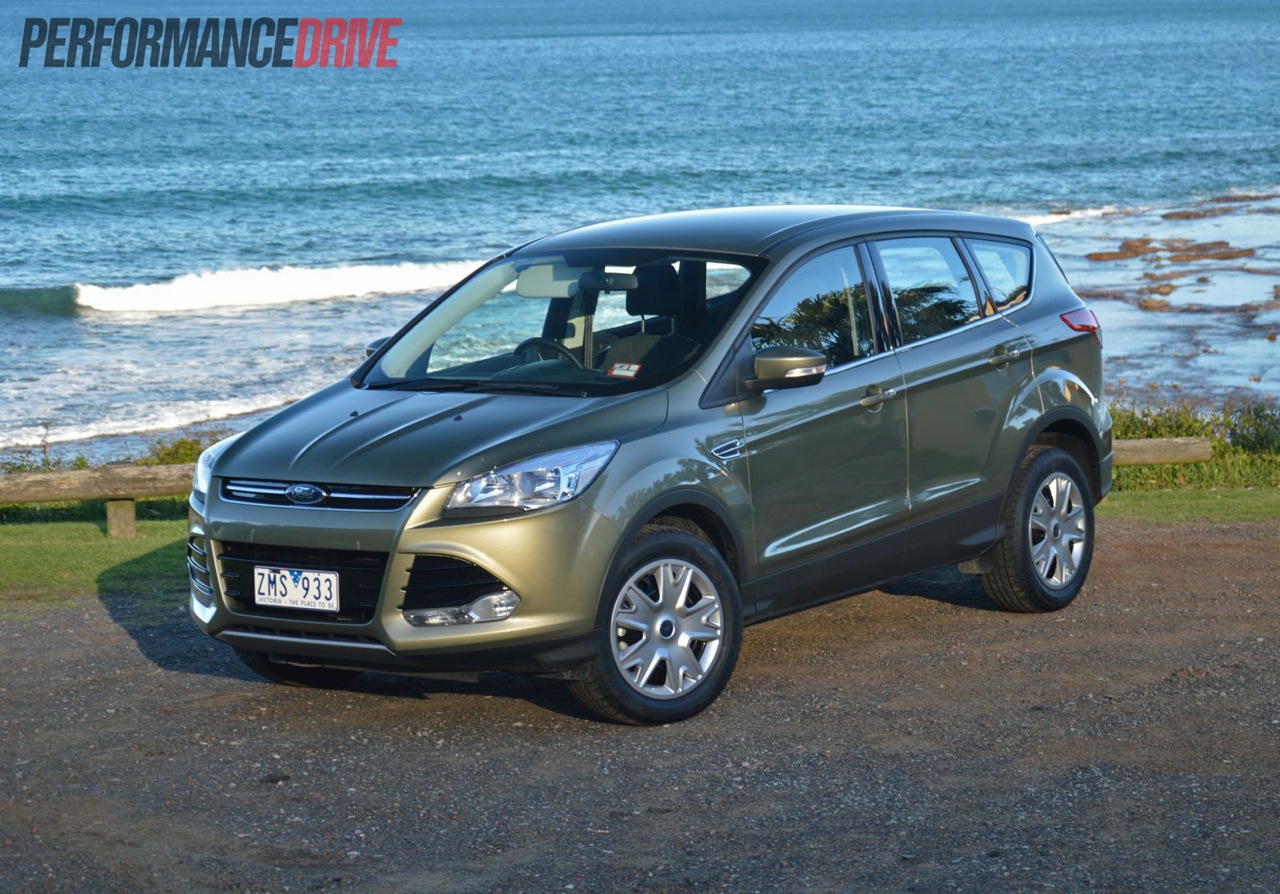 Thanks to a comprehensive model update, the 2013 Ford Kuga Ambiente is more appealing than ever. It’s looking to set new standards in the segment with innovative technologies and a range of new economical engines to help it compete at a world-class level. 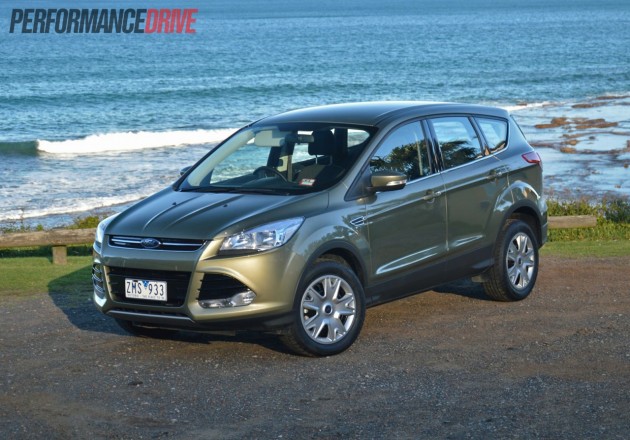 Ford Australia introduced the Kuga in 2012. After being on sale for just over one year, the 2013 model arrived, just a few months ago. It’s larger than the original, offering the same wheelbase but with a substantial 81mm added to the length for improved rear seat space and cargo capacity.

The Kuga is now available in front-wheel drive form (entry-level Ambiente only), and for the first time it’s also available with a choice of turbocharged, fuel-efficient petrol and diesel engine options.

What we’re testing here is the entry-level Ambiente fitted with the very new-to-Australia 1.6-litre turbocharged ‘EcoBoost’ four-cylinder petrol engine. It’s available in two states of tune, including 110kW for the front-wheel drive version, and 134kW and 240Nm in all-wheel drive guise (as tested). All all-wheel drive models (all variants except the entry-level FWD) come with a six-speed PowerShift dual-clutch auto transmission.

A new 2.0-litre TDCi turbo-diesel is available for the mid-spec Trend and flagship Titanium, producing 120kW and 340Nm (full review of those coming soon).

Splitting up the range has allowed Ford to implement a more competitive pricing structure. The base model FWD EcoBoost kicks off at $27,990, while this Ambiente AWD EcoBoost starts at $31,490. These prices are around $10,000 cheaper than the first-gen model. 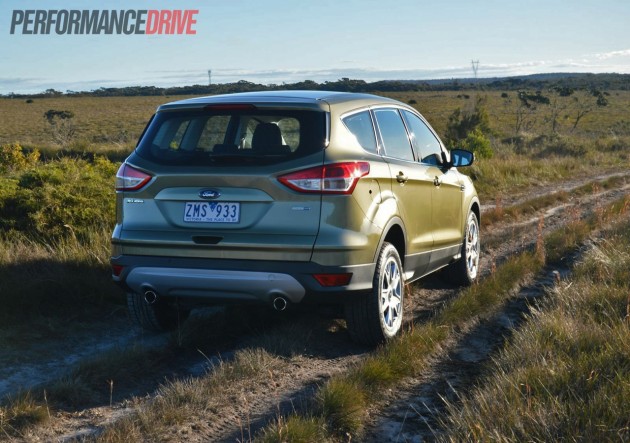 Based on the Ford Focus, the Kuga is much larger than you might think. The growth in cabin space over the predecessor is obvious and impressive, with good legroom and headroom on offer in both the front and second rows.

Thanks to the airy atmosphere, the cabin feels welcoming. It isn’t cluttered. There’s also a good placement of the major fixtures, while decent materials are used for most of the dash and door trims leaving for an appealing and respectable decor.

Some extra storage space around the centre console would be nice; there are only two cup holders behind the gear lever and not much else. Due to a dash-mounted gear lever, there is no additional room for smaller items such as a mobile phone.

It’s a practical cabin and one that is perfect for young active families with active lifestyles. It doesn’t showcase an innovative rear-seat folding mechanism like what some of the rivals offer though, such as the Honda CR-V.

Perhaps most appealing to those in this market is the perched up driving position. It sits high, giving you a clear view of things around you. Jumping into the seats is also a friendly occasion. It’s one of those vehicles that you can simply slide into rather than climb up or crouch down to get in.

In terms of equipment, the base model Ambiente comes with a reasonable list of standard features. It does miss out on the large LCD interface and more sophisticated dash fascia layout with piano black trimmings, that the higher end versions get, however, it is well packaged.

There’s a six-speaker stereo system with USB and Bluetooth support, voice recognition, cruise control with brake function, central locking, a start/stop button, sporty and highly supportive yet quite comfortable seats, a trip computer, and a manual air-conditioning system. In other words, most modern conveniences are there.

Unfortunately, the layout Ford has selected for the controls on the dash is confusingly complex. Some buttons look like they belong on an action figure, while others don’t actually seem like buttons at all, rather, needlessly over-designed contours of the dash. The younger generation drivers might like this kind of busy/futuristic design.

The new model has lost the dual-opening tailgate from the first-gen model. This may be a disappointment for some. Cargo space has increased though from 360 litres to 406 litres. It can be expanded to 1603 litres with the rear seats folded – and they do fold almost completely flat.

Ford’s latest hands-free tailgate opening technology is not available on the Ambiente, even as an option. It comes with the Titanium.

In regards to safety, as usual, Ford products are properly primed with modern safety devices. And the Kuga Ambiente is no different. It comes with stability and traction control, roll-over stability, rear parking sensors, trailer sway control, nine airbags, and all-wheel drive with Active Torque Transfer and torque vectoring. It all gets the blessing of ANCAP’s five-star rating. 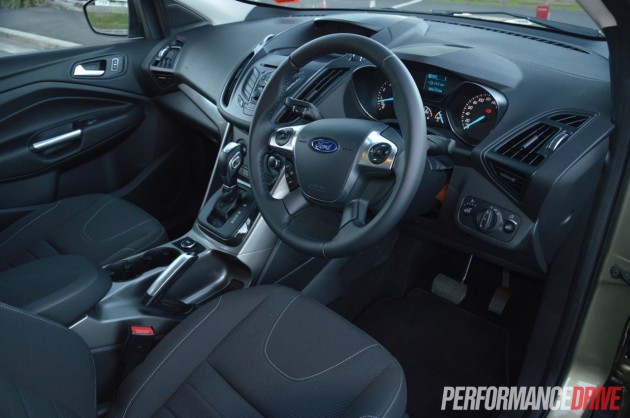 Fans of the old 2.5-litre turbo five-cylinder Kuga, which offered 147kW and 320Nm, will miss the oomph in the EcoBoost. In-gear acceleration is relatively weak, and although there is enough torque on hand for most city driving duties, long up-hill moils seem to put strain on the transmission as it tries to discover additional torque.

Of course, the upshot of the reduced output is improved fuel economy. When we tested the previous version, we averaged around 10.9L/100km, which is not exactly class-leading in this segment.

Synonymous with efficiency, the EcoBoost sub-brand has been responsible for some excellent engines in the recent past. Although economy is not at the top of the class here, the new engine certainly relieves a load of pressure from your bank balance when stopping for fuel. We averaged 8.3L/100km – the official average is 7.7/100km.

Like the 2.0-litre EcoBoost, the 1.6 in this is a little on the noisy side. It’s not an appealing soundtrack either. It gives off a very generic whirring and buzzing note which can be intrusive on the cabin ambiance, especially if you’re scooting up and about in some hilly conditions.

Speaking of hills, the PowerShift dual-clutch transmission is a bit of a let down in our opinion. It likes to hunt around for gears like it’s trying to find that magic ratio, until it eventually realises one doesn’t exist.

The gearbox downchanges during inappropriate times, and sometimes upshifts when really it should hold onto the gear to assist the little 1.6. We also experienced some jolting and confusion during our test, but this may be isolated to our test vehicle only.

Overall performance is marginally on par with some of the competition. We timed 0-100km/h in 9.8 seconds. Quick upchanges do contribute to a sporty acceleration feel. 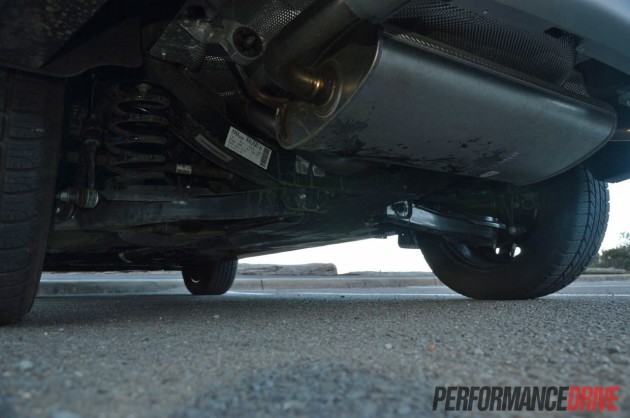 One of the best things going for the 2013 Kuga is the driving and handling characteristics, both on and off the road.

On the road it’s engaging, fun, and very energetic with quick steering supported by good chassis dynamics and composed suspension with an independent rear layout.

Ride comfort is on the firm side, which may not be everyone’s cup of tea. We feel it’s a pleasing compromise between sturdy handling and satisfying compliance. In other words, it’s a sporty setting rather than an outright comfort-focused setting.

Off the road, the Kuga is surprisingly well prepared for mild to intermediate terrain difficulties. The chunky 235 tyres need to be thanked for providing excellent traction in slippery conditions, while the 192.9mm ground clearance is above class standards, and even above what some more serious off-roaders offer, including the Ford Territory (175mm). 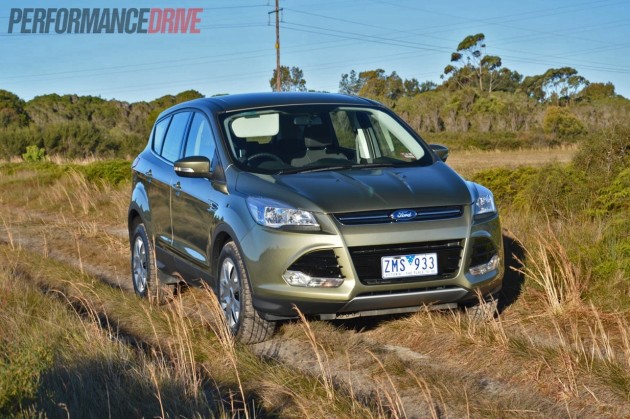 The new Kuga is now a keen player in the medium-size SUV market segment. It’s one of the best handling in our view, and it’s also extremely easy going and fun to live with on and off the road.

For Ford Australia, this is probably one of the most important vehicle offerings in the showroom. It’s no secret that the SUV market segments are dominating sales at the moment. With the Kuga now truly capable of grabbing a proper slice of the popular mid-size arena, it couldn’t come at a better time. 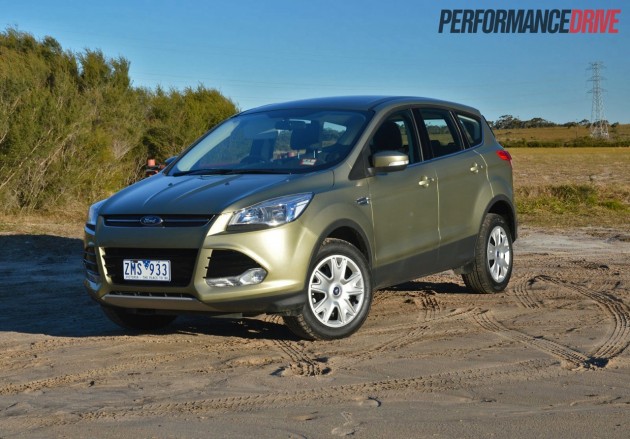