With the launch of the new most powerful Camaro ever heating up, Chevrolet has unveiled the 2013 Chevrolet Camaro ZL1 convertible edition. The ZL1 convertible is set to make an official debut at the 2011 Los Angeles Auto Show in November. 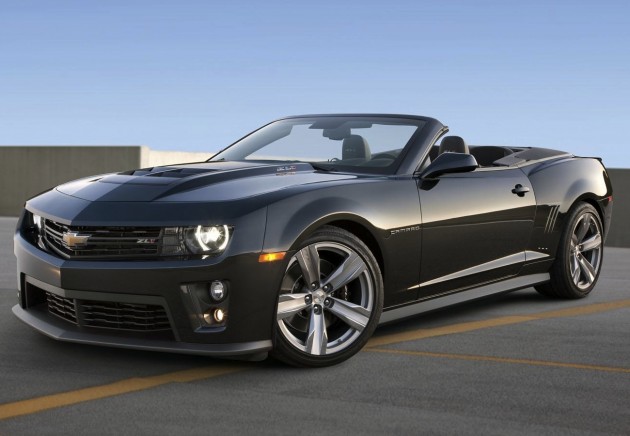 The 2013 Chevrolet Camaro ZL1 convertible will share the same powerplant as the highly anticipated Camaro ZL1 coupe, consisting of a 6.2-litre supercharged V8 developing a stonking 432kW of power and 754Nm of torque.

As previously reported, the Chevrolet Camaro ZL1 coupe has lapped the Nurburgring in 7:41.27, proving the new flagship model isn’t just a very powerful muscle car, but also a very quick package through, up to and out of corners.

Changes to the convertible compared with the coupe, apart from the obvious drop-top roof, include revised front end styling with a new grille and central fascia as well as a new vented bonnet and slightly different bodykit.

To cope with the reduced structural rigidity of a remove roof, Chevrolet has also installed a strut brace connecting to front suspension towers, as well as an X-brace underneath the front end to further reinforce front end stiffness.

Like the coupe, the convertible is expected to come in either six-speed manual and auto form, and come with Chevrolet’s new Magnetic Ride Control adjustable suspension and Performance Traction Management traction control systems.

The 2013 Chevrolet Camaro ZL1 convertible is expected to go on sale towards the end of 2012, some time after the release of the ZL1 coupe.