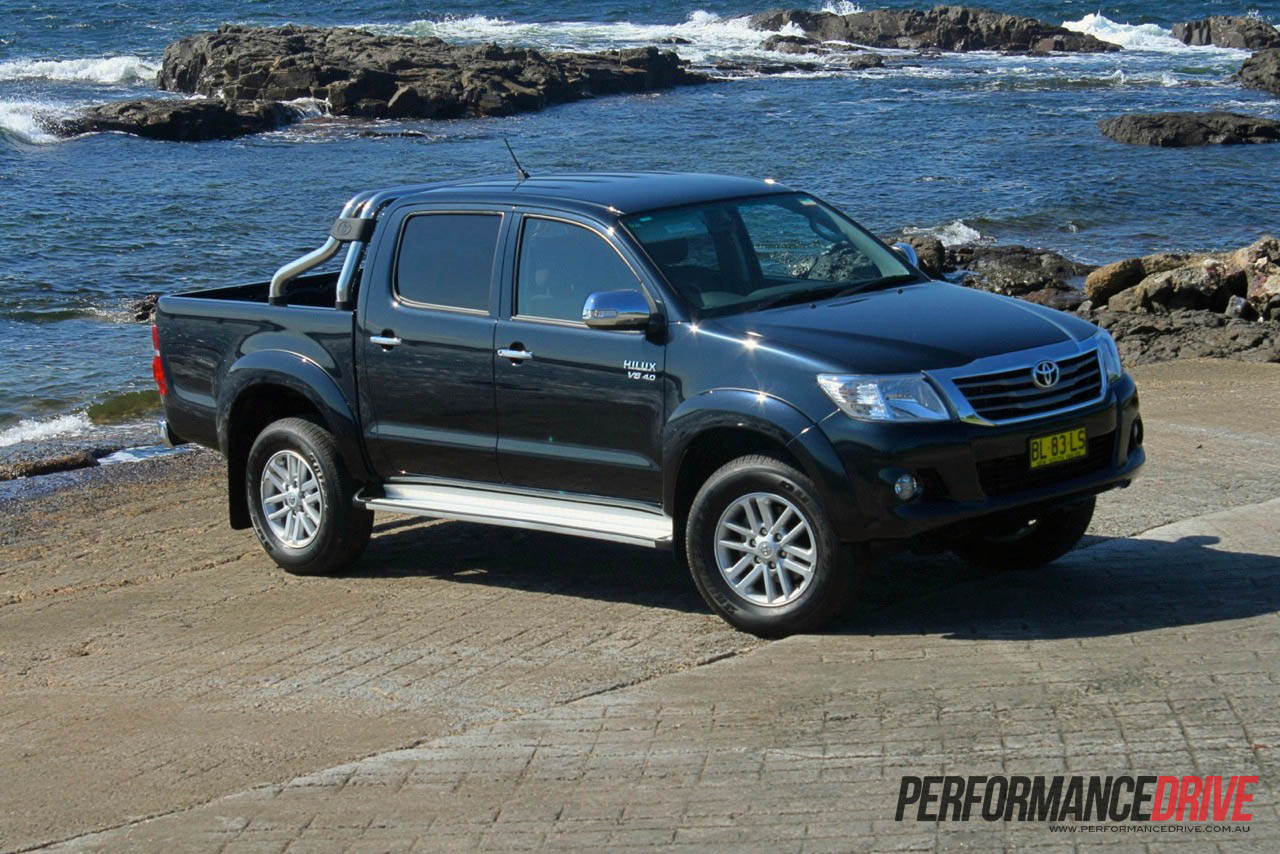 The ‘indestructible’ HiLux was Australia’s best-selling 4×4 ute last year, totalling 23,725 sales. Welcome to the 2012 Toyota HiLux SR5 fitted with the 4.0-litre V6 petrol. Although the 3.0-litre turbo-diesel is the most popular, we thought we’d try out the petrol for its performance benefits. 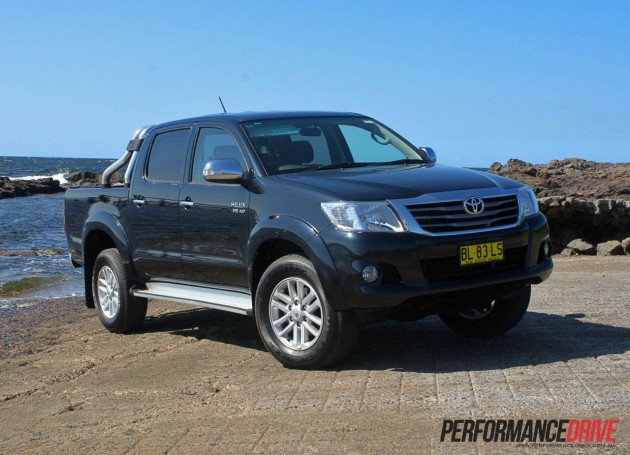 The 2012 Toyota HiLux SR5 and indeed the complete 2012 range comes with new styling, featuring a completely new front end from the A-pillars forward. The HiLux lineup – which spans a whopping 35 different variants (17 4×2 and 18 4×4) – also comes with between $1960 and $8340 in added value over the previous generation model. 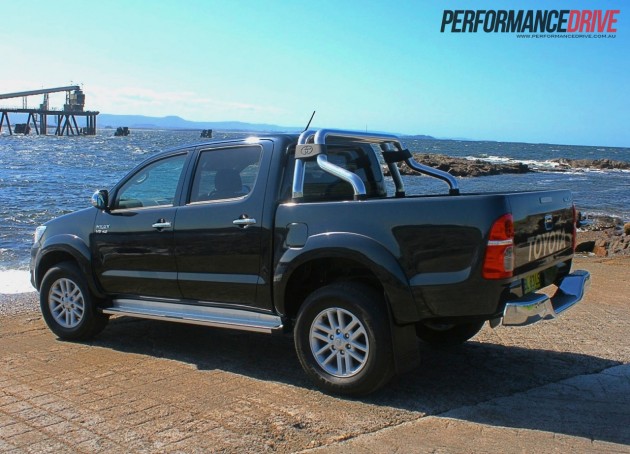 The SR5 double cab is available with a 3.0 turbo-diesel four-cylinder producing 126kW of power and 343Nm of torque, matched up with either five-speed manual or a four-speed auto. Or, there’s a 4.0-litre V6 petrol, as tested here, producing 175kW and 376Nm. It’s available with either a five-speed manual or a five-speed auto. A limited-slip differential and a part-time four-wheel drive system is also part of the package.

Stability control is now standard on all SR5 double cab variants, as is ABS brakes, cruise control and a rev tacho. Other changes for the new model include a horizontally themed upper dash design, matching the new front end. Toyota says this reinforces the breadth and roominess of the HiLux – no need for reinforcement Toyota, it’s massive as it is.

The interior of the double cab HiLux is quite large and will easily accommodate five adults. Even the middle seat in the back is wide. There’s dual cup holders for rear pew passengers, as well as power windows, and ceiling grab handles for those in the window seat. 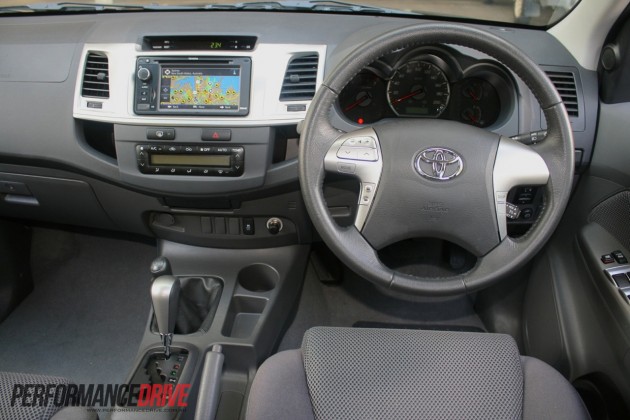 The front seats are comfortable and surprisingly supportive, with lateral bolsters. Rear seats are also very comfortable for a double cab ute. The backrests are not upright like in some utes, providing a slightly laid back angle, with soft padding. Legroom and headroom is also very good front and rear.

As with most Toyotas, about the only criticism to the interior of the HiLux is that it is quite boring. It’s as if Toyota picked up a bargain at its local grey plastics outlet; everything is grey and conservative. The upshot is it is very robust and trustworthy, and there’s never a moment that you feel confused or overwhelmed by its design; a feat which can result in a relaxing drive. 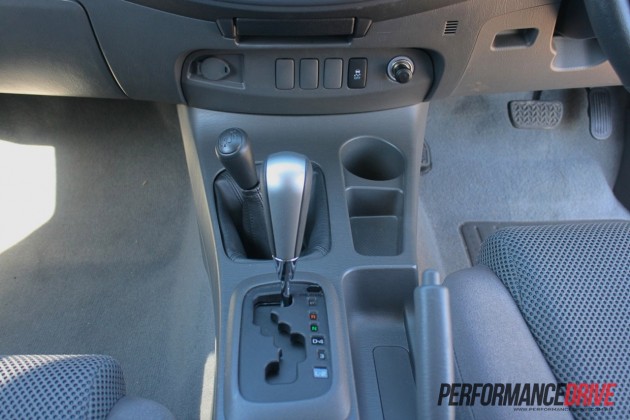 Our test vehicle had around 6500km on the clock, which is high for a press vehicle. Even so, the plastics showed no major sign of wear or nasty scratches, proving that it might be boring, but also tough.

Looking at the front end it is instantly recognisable that it’s a Toyota. The new grille is in tune with the company’s latest SUV design language, also seen on the fatherly LandCruiser.

It’s perhaps the most conservatively styled of all the dual cab off-roaders, with a large solid face, and consistent and proportionate lines. These SR5 models all come standard with a chrome double-tube sports bar, matching the new indicator-infused chrome side mirrors and chrome front grille. 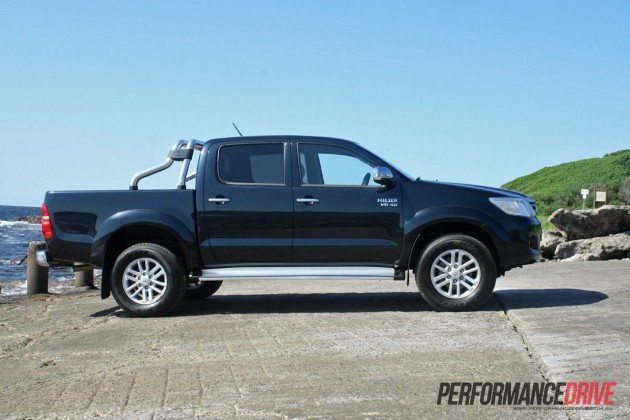 There’s also a chrome rear bumper bar, new 17-inch double six-spoke alloy wheels, and mild tinting for the rear windows. Overall the 2012 Toyota HiLux SR5 looks very imposing, dominating and masculine; it looks like it’s always ready to get the job done and get it done well, which it does – as outlined below.

All 2012 4×4 Toyota HiLux models are yet to be tested by ANCAP, however, the 2005 models received four stars. The SR5 variants come with side seat and curtain-shield airbags, and dual front airbags, as well as traction and stability control. 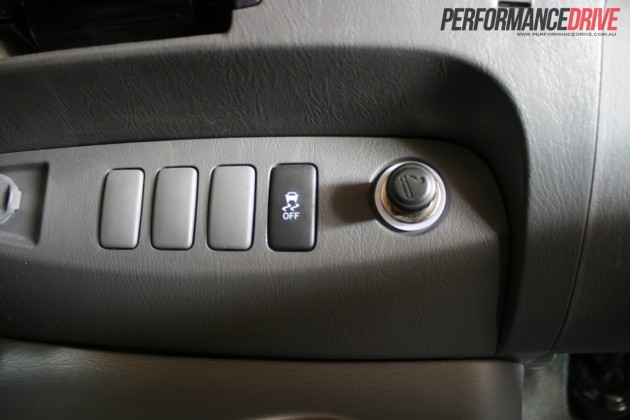 Although it’s far from a performance vehicle, the 2012 Toyota HiLux SR5 4.0-litre petrol V6 offers the best power-to-weight ratio in its class. It tips the scales at 1770kg, while offering that 175kW of whack in the back power. It is one of the lightest weight 4×4 dual cab utes you can buy at the moment too, aside from some of the Mahindra and Great Wall options.

You might be thinking what does a power-to-weight ratio have to do with a ute. Well, driving a ute can sometimes seem like a bit of a job in itself, working the gears to get it all moving. We timed 0-100km/h in this petrol version in just 8.7 seconds. It surprised us so much we had to do it again, resulting in 8.72 and 8.75 seconds.

Not only does the power-to-weight ratio help with getting going, but also fuel consumption as the engine doesn’t have to work as hard in normal conditions. It also helps during cornering believe it or not. The HiLux doesn’t feel heavy or cumbersome; it feels large, but not lazy, a bit like a heavyweight boxer.

Feeding the HiLux around a tight roundabout is no more tiring, or ‘uncomfortable’ for the vehicle, than doing it in an SUV or crossover. The relatively tight steering rack – for an off-road ute – also means you don’t spend all day working the wheel, while the 12.4-metre turning circle isn’t too bad either. 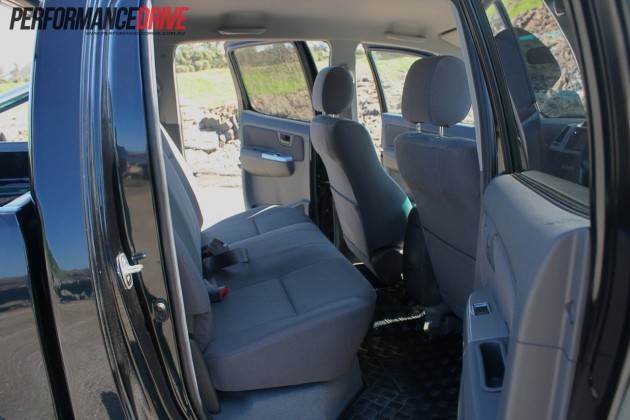 As for on-road comfort, rear seat passengers do experience some jiggling from the leaf spring live axle rear suspension, but this is very common in utes. Up the front, it’s a relaxing drive. The cabin doesn’t creak or rattle, while the independent front suspension absorbs all of the initial road imperfections. All round visability, as you’d expect in a high-riding 4×4 ute, is excellent.

Like all Toyota off-road vehicles, the 2012 Toyota HiLux SR5 is almost unstoppable when it comes to the rough stuff. The rear overhang is large due to the 1520mm-long tray, which means the 23-degree departure angle could scrub quite easily with a tow bar. However, we didn’t encounter such problems with no tow bar. 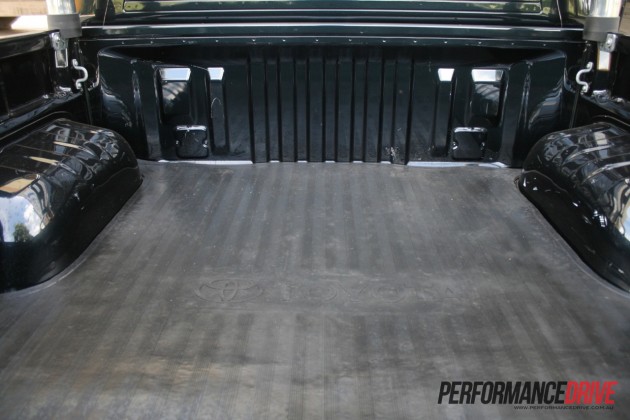 The rear limited-slip differential clutches in our test vehicle did seem a bit tired on some occasions, spinning the inside wheel until the traction control system cut in. There is no differential lock option either, like there is in other 4×4 dual cab ute models such as the Triton and Ford Ranger. We feel this does hinder its full off-road potential somewhat. The traction control system does help in some very tricky situations though.

Overall, if you’re buying a ute, chances are you not entirely focused on doing extreme off-roading, for that there are vehicles like the Jeep Wrangler, but for almost all weekend getaway expeditions, the HiLux does very well, with ample ground clearance and off-road maneuverability. The five-speed auto does a good job of being in the right gear at the right time, too. 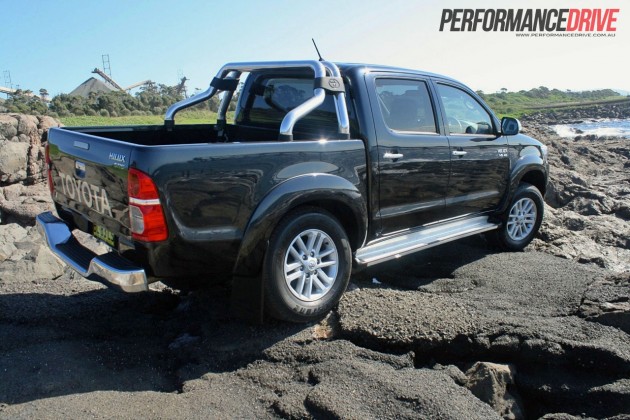 It’s easy to throw criticism at Toyota these days, with the large-scale recall problems it has been experiencing lately, mainly in the US, but as a tool that simply gets down and does its job, there really is very little to fault with the HiLux. It’s very comfortable for highway cruising or city running about, and it can get down and dirty like a proper heavy duty workman’s workhorse.

About the only real drawback is the fuel consumption of the petrol engine. We averaged 11.7L/100km, or 8.5L/km according to the dash readout, and covered 540km on one 76-litre tank. If 0-100km doesn’t mean much to you, we suggest going with the crowd and taking the diesel route. 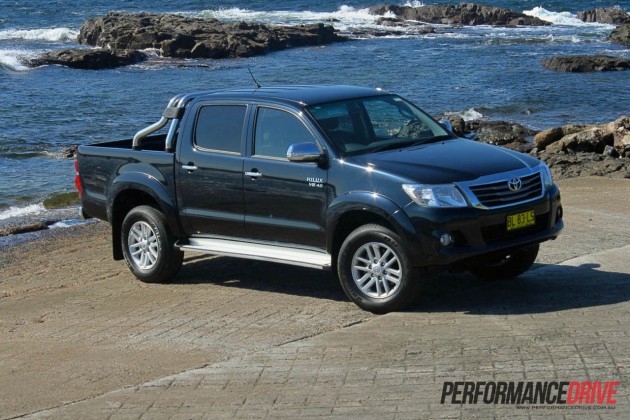 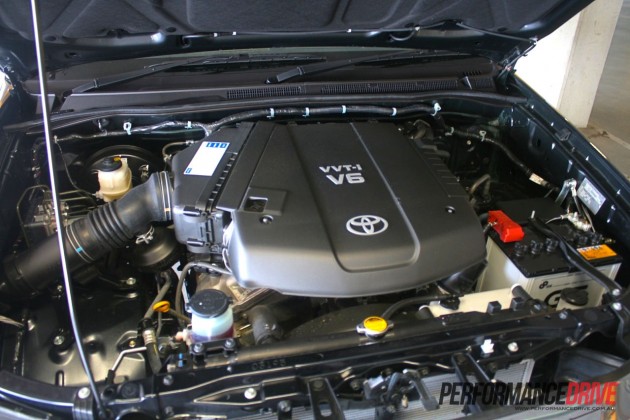