Porsche has taken the wraps off the new 2012 Porsche 911 GT3 Cup car which will be raced in various Carrera Cup-style competitions around the world. The new GT3 Cup race car gets a larger, safer fuel tank and minor trimming and detail changes over the existing version. 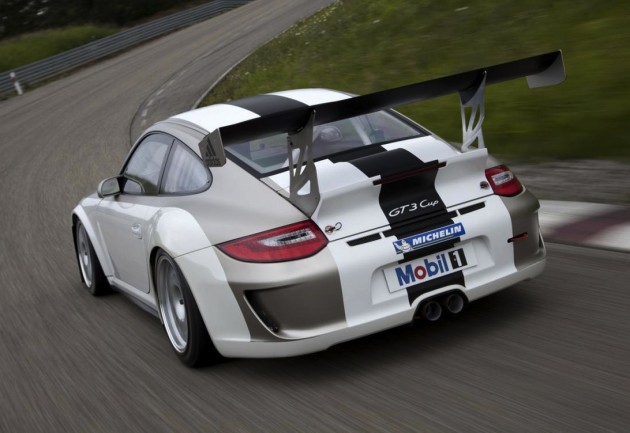 The 2012 Porsche GT3 Cup car is based on the raw and raring Porsche 911 GT3 RS road car, featuring an almost identical engine. Since various restrictions are in place for motorsport, the GT3 Cup race car can’t be made with some heavily turbocharged powerhouse. Instead, it gets a 3.8-litre flat-six naturally-aspirated engine outputting 331kW of power.

The engine has been revised somewhat to suit racing and uses a controlled catalytic converter and race exhaust system. With the same redline cut-off as the road-going GT3 RS, it’s sure to sound very awesome.

As part of the new model revisions, Porsche has engineered a larger, FT3-certified 100-litre fuel tank for the 2012 version. Porsche says,

“Compared to its predecessor, the vehicle is now suitable for an even wider range of endurance racing. Moreover, the new fuel tank contributes to a further improvement of the high safety standards.” 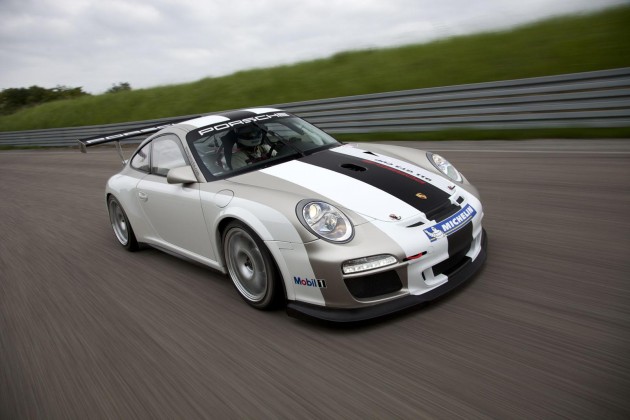 Looking at the exterior, it’s quite easy to tell this is not your average 911 for the road. It features big pumped out wheel arches front and rear which accommodate 9.5 x 18-inch lightweight alloys on the front and 12 x 18-inch alloys on the rear. Both are wrapped in Michelin race tyres, although, there are various wheel and tyre packages available to suit different types of racing.

The help the GT3 Cup pull up at every corner, and to help it accelerate away, the new 911 features Porsche Ceramic Composite Brakes which not only provide repeated stopping performance, they also provide a weight saving of 20kg over the normal braking setup.