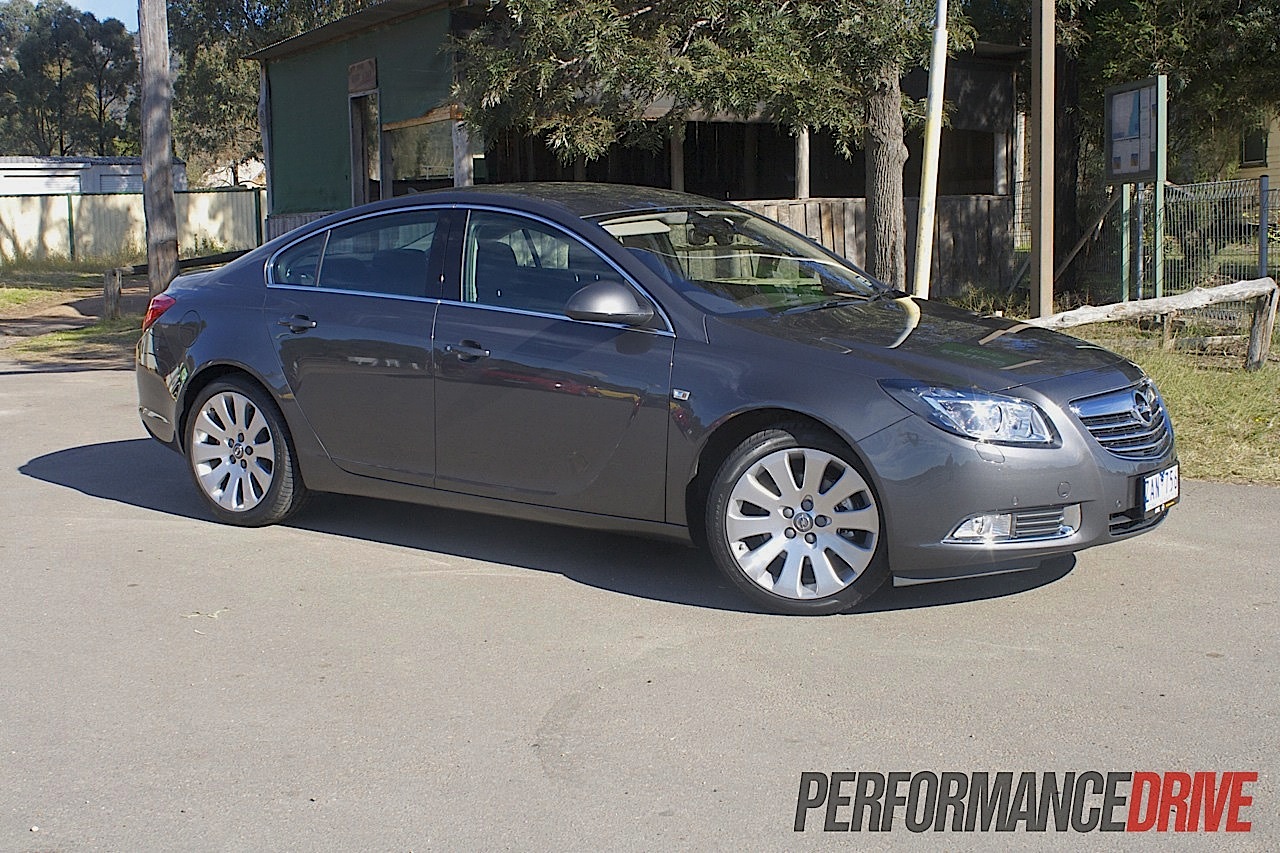 The 2012 Opel Insignia sedan and Insignia Sports Tourer wagon have just been launched in Australia. With rave reviews coming from overseas, and multiple awards under its belt since its introduction in Germany in 2008, how does the slick executive shape up in Australia? 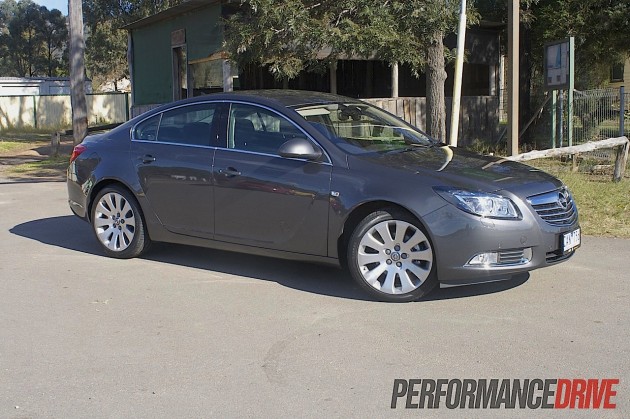 The launch event involved only a few hours behind the wheel of each pre-production test car; a Sports Tourer diesel and Select turbo petrol sedan. We’ll cover the basics in this review and try to give you an idea of the Insignia in a more general sense. We are aiming to do more in-depth reviews of specific variants in the near future. 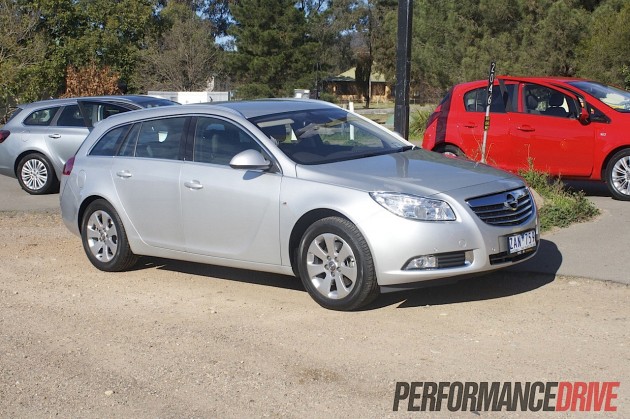 The Insignia is based on GM’s Epsilon II platform which also underpins the upcoming Holden Malibu, and the current Buick Regal. In Europe, the Insignia has been out since 2008. It has since collected around 50 major awards along the way, including the 2009 European Car of the Year award.

So what is it exactly, you might be asking. The Insignia is a mid-sized front-wheel drive sedan that can be had with either a turbo-petrol or turbo-diesel engine. It’s available in two trim levels; the Insignia and Insignia Select, in both sedan and Sports Tourer wagon form. All models come with a six-speed automatic transmission. 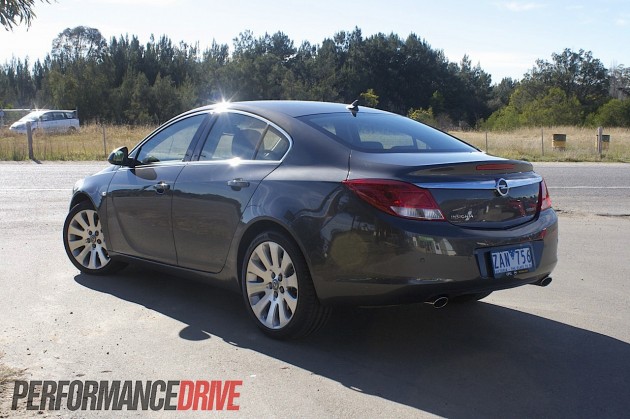 Built in Germany, the Insignia is all about build quality, fit and finish, and, refreshingly, cutting-edge design; there’s a reason it has been awarded so many times.

Prices start at $38,490 for the base model petrol Insignia, ranging up to $48,990 for the top line Sports Tourer Select diesel.

Apart from the usual list of standard features you would expect on a semi-premium mid-sizer, the Insignia, and all Opels in fact, have been developed with the user in clear focus.

In the back of the Sports Tourer, for instance, the cargo area features touch-button flip-down rear seats. This is great if you’ve just lugged a large load up to the back only to realise you need to flip the rear seats down for more space. You simply press a button in the back and both rear seats fold forward. 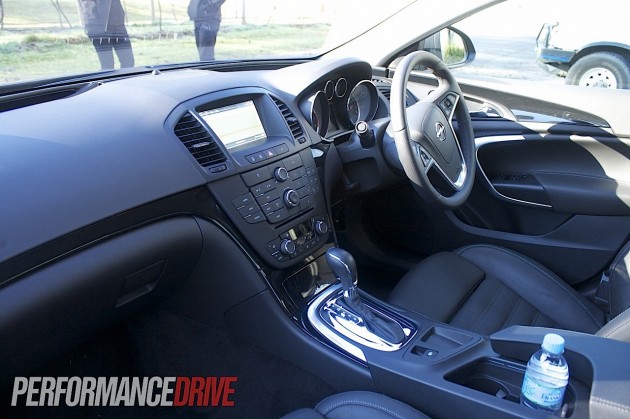 Another feature that Opel is really pushing with the Insignia and the rest of the new Opel range is adaptive headlights. These go a step further than simply pivoting around to project a beam at a different angle though. The Adaptive Forward Lights (AFL) feature multiple beams capable of dividing the focus to various areas of the road ahead according to your steering inputs. We didn’t get a chance to test these out in our initial drive impression which ran during the day.

Another standout feature are the AGR-approved Sports seats. In the base model, the seats walk the fine line of blending comfort with supportive sportiness. If you step up into the Select though, or option to the Sports seats, you’ll find these are some of the best around.

They’re big, accommodating, yet very supportive even for smaller types. They’re also quite soft and cushy, like a lounge chair that has been put on a diet for a few months. Legroom in the front and rear is more than satisfactory for this segment.

In terms of standard equipment, the base model comes with a seven-speaker stereo with Bluetooth connectivity, automatic wipers, auto headlights, and dual-zone climate control. 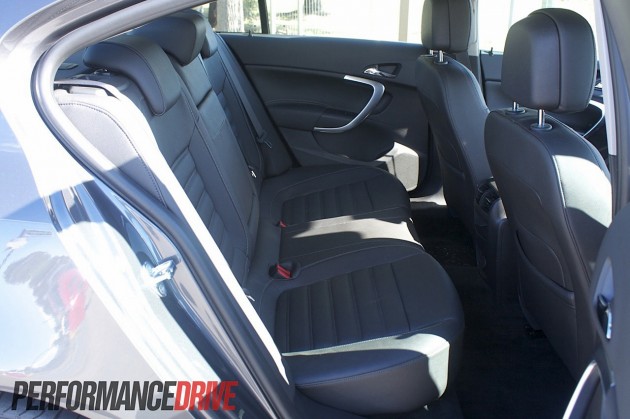 Opel said at the launch yesterday that design is one of its integral brand development focuses. And you can see that just by looking at its latest products. The Insignia manages to present a modern and active design that is also very functional. It’s also more Australian than you might think as well, as the head designer at Opel is Australian-born Niels Loeb.

In the Sports Tourer, the rear bumper bar doubles as a bench to place items while you sort out the cargo space.

When you lift up the tailgate you also notice there is another set of taillights beneath the hatch. This is so approaching motorists can still see you at night when the tailgate is open. It’s little touches like this that push the Insignia beyond some of its competitors. 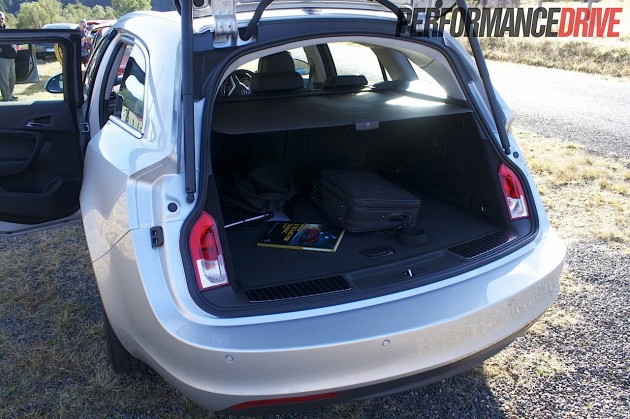 Inside, the dash has been formed around the driver, with flowing lines that encapsulate the passengers. The lines also flow from the dash and into the door trims, providing a welcoming open-armed environment. Again, it’s the attention to detail that impresses here.

Whether you’re after a sedan or wagon, the Insignia is a great-looking car from all angles. It’s also something a little different from the rest, although, some design characteristics at the rear end of the Sports Tourer are similar to the Passat and Audi A4 wagon in our opinion. This isn’t necessarily a bad thing.

(Not featured on the Select sedan test model is a lip spoiler. Opel says these early pre-production models are missing a few of elements which will feature on the producing cars.)

Australia’s ANCAP safety experts are yet to test the Insignia, however, Euro’s NCAP has awarded the car the full five stars. It comes with six airbags as standard, traction and stability control, and active headrests.

We know what you might be thinking here, and to tell you the truth, we were almost pre-thinking the same thing; it’s from General Motors, it’s not German enough to be a driver’s car. Right?

That’s where you and we are wrong. The Insignia is built in Germany, and has been built to Germany’s high standards. Opel is launching a marketing campaign for the new range in Australia using lots of German language; get used to the phrase ‘Wir leben Autos’ – we love cars. The company is really hitting home that this is a true German vehicle.

Behind the wheel, pretty much all that original questioning is wiped clean. The Insignia feels very solid and sturdy on the road. It’s hardly ever nervous, and steers around with confidence. It gives you an overall safe and secure feeling as well. These points are synonymous for German vehicles.

As we mentioned, the launch event only allowed journalists a few hours behind the wheel of various vehicles. On this particular launch, the brand was launching an entire showroom, with four different vehicles on hand, and seven overall in various trim levels. We aim to fully test the car out in more detail in the near future. 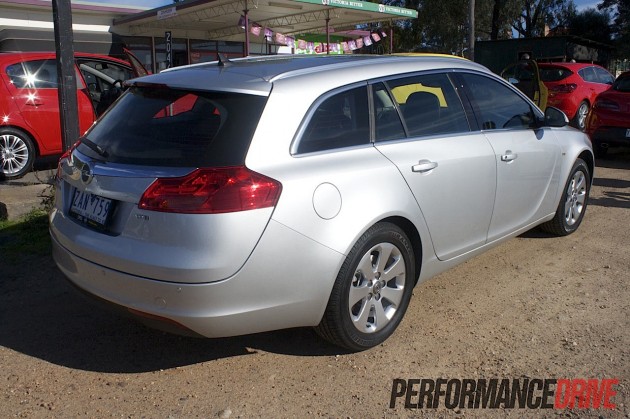 In the diesel Sports Tourer wagon, we noticed the suspension is set up for a more supple ride, with soft suspension absorbing the rather bad roads that were involved in the test route.

In the Select turbo petrol, which gets 19-inch alloy wheels, the Insignia steps it up a notch. The suspension is firmer and in that respect less forgiving. The upshot is agility and handling are enhanced. As long as you stay clear of less-than-satisfactory roads, the Select is a superb all-round performer, hunkering down and tucking into corners very well.

Driven with vigor, the Select petrol and its 162kW rips you along at a very respectable rate. You can clearly the hear the turbo whistling and sneezing away, which adds more theater to the driving experience.

If we had to select between all variants, we enjoyed the diesel wagon, especially as it registered an average fuel economy rating on the dash readout of just 7.5L/100km. This is excellent, especially for the punchy point-to-point driving style the car was subjected to during our test.

Overall though, you simply can’t walk past the top of the line Sports Tourer Select petrol wagon. It’s gorgeous to look at, and because it’s a wagon, it’s already very cool. Match that with the whistling turbo petrol capable of 0-100km/h in 7.8 seconds, yes please.

It will be very interesting to see how Australians take to the new Insignia and indeed Opel as a brand. The Insignia is a competent and highly viable proposition in this segment. If you’re after a new company car or a family wagon, simply take one for a test drive. We are confident you will love it.

The only problem is Opel is a brand that is new to Australians and one that is a lot less known here as opposed to the other German rivals (Volkswagen in particular). Also, just 17 stand-alone dealership networks have been set up around the country. Will these factors injure a sales potential? We hope not.

Opel is planning to expand its dealership network over the next couple of years, and plans to release 30 new models by 2014. This initial range of Opel cars – Corsa, Astra, Astra GTC, and Insignia – will officially go on sale in Australia on September 1. 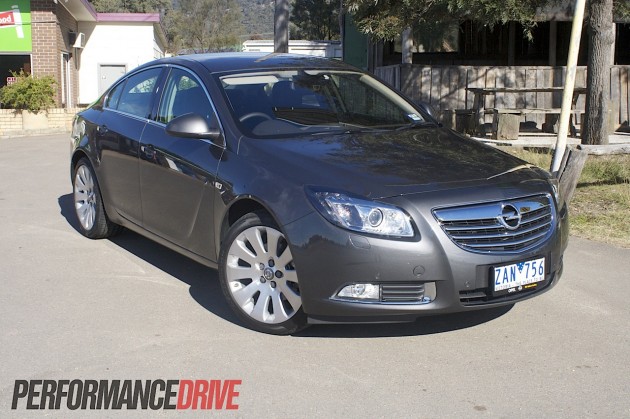 BORE X STROKE
not available at time of writing