For some, having ute space and four-wheel drive capabilities is vital. The 2012 Mitsubishi Triton GLX-R, representing the third best-selling 4×4 ute in November behind the HiLux and Navara, seems to do a good job of combining such things into a vehicle that not only looks sporty, but goes pretty darn well, too. 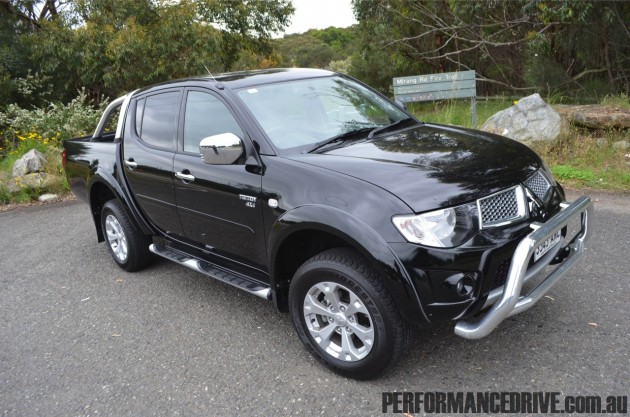 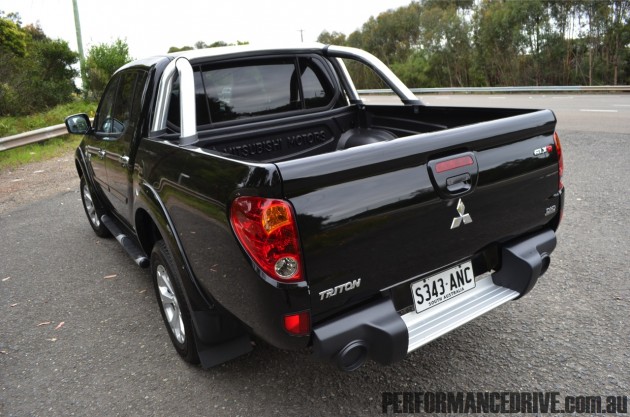 What we have here is Mitsubishi’s top of the range truck for the tradies, or families who need the ute space and/or four-wheel drive. No one will argue that the 2012 Mitsubishi Triton GLX-R is a masculine car to look at, with features like chrome mirror covers, chrome roll bars and front nudge bar, six-spoke alloy wheels, and side runners. Finished in metallic black, it has somewhat of a ‘gangster’ look about it.

The diesel is by far the pick of the engines in the Triton stable, with torque coming on like a hurricane through the Wild West, it propels the 2012 Mitsubishi Triton GLX-R through the gears as fast as your average family sedan. The second you demand power, the engine responds with a rush of boost from the single turbo layout, with minimal turbo lag. 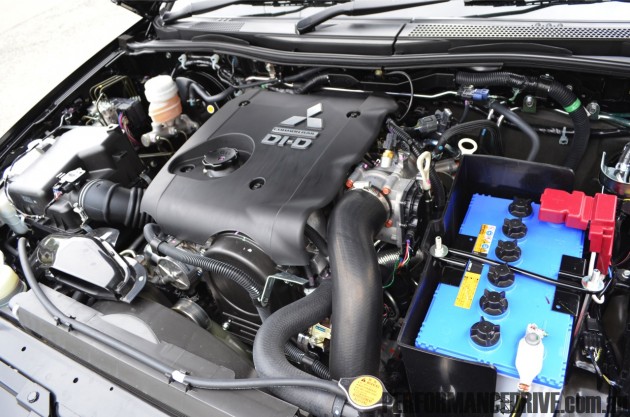 The five-speed automatic found in the 2012 Mitsubishi Triton GLX-R (all non-GLX-R diesel automatic Tritons are four-speed automatic only) feels like it’s easily up the job of carrying a boat, or trailer. It holds the gears very relative to how much acceleration you want like a good lock-up automatic gearbox should.

It’s general operation is smooth, however kick down can be a tad ferocious if you really slam your right foot down. If manual transmission is more your thing, you’ll be glad to hear you also get an extra 50Nm of torque for your trouble.

Off road, we put the 2012 Mitsubishi Triton GLX-R through its paces over some rather large dirt mounds and narrow trails. Using the lever located next to the gear shifter, it’s easy to select between 4×2, and 4×4 low and high-range drive modes. 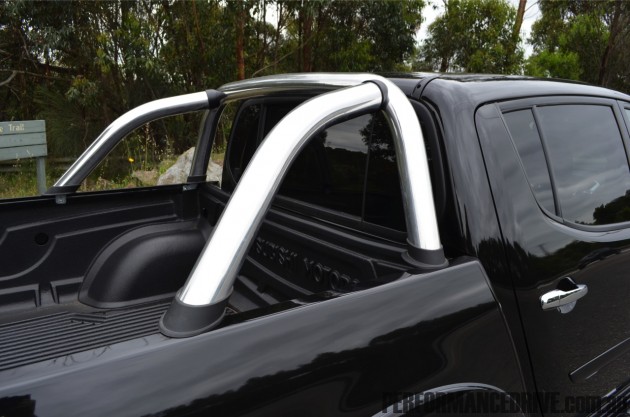 If you’re worried about wheel spin when you’re off the tarmac, you can lock the rear-diff with a button located on the dash (the rear diff lock feature is a $750 option on the GLX-R). Through our test section of dirt, the GLX-R performed well, with its factory, more-suited-to-the-street rubber the initial limiting factor to its off-road potential. With chunkier tyres, we have no doubt it will get you through most leisure weekend trails.

Suspension-wise, the front is double wishbone with coil springs, and the rear is rigid elliptic leaf spring. It showed decent wheel travel, and great climbing potential – the diesel/auto combo also helps during the ‘slow and steady’ bush trails when you’re trying to keep traction loss to a minimum, as there’s no sudden jolts often associated with changing gear, or releasing the clutch too quickly.

Front overhang is short, but the rear is quite long (it’d be even worse with a towbar) so you need to stay mindful of not driving up short steep stuff, or your Triton will turn from tidy 4×4 to farm plough – you’ll ruin the nicely-presented rear step, too. 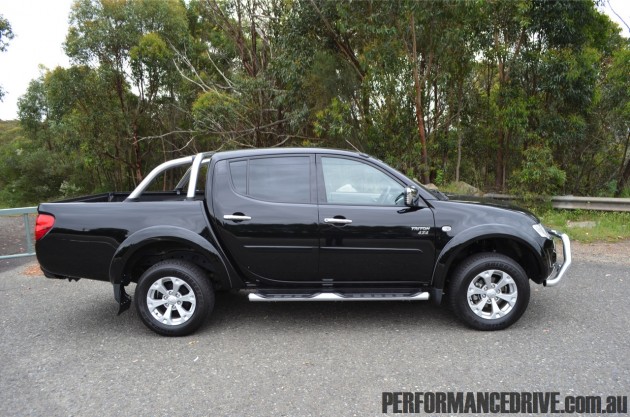 Cargo area in the back is deep, and long enough to fit two dirt bikes, provided you keep the tail gate down. Cargo area length is 1505mm, width is 1470mm, and it’s 1085mm wide between the wheel arches.

As far as braking performance, front ventilated discs with single piston calipers and rear drums (leading and trailing shoes) feel solid, but perhaps a tad spongey. It is a braking system that is engineered to pull up epic payloads; 935kg, 3000kg braked trailers full of sand… you get the picture.

The 2012 Mitsubishi Triton GLX-R’s cabin is a comfortable, nice place to be. While it might not appear overly exciting, it’s purposeful, and is full of hard-wearing materials and plastics, for those who give their trucks a lashing. The front seats are supportive, and comfortable for long journeys, as well as soft enough in the rough stuff.

The back seats do have adults in mind, although leg room is only just okay. You can find yourself quite relaxed in the Triton up front, with your arm on the window sill. It’s a comfortable place to be as you go about your daily duties. 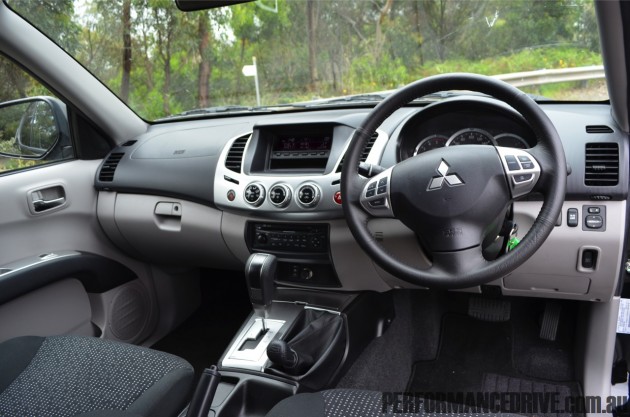 The in-dash display will keep you amused at traffic lights, displaying current temperature, barometric pressure, height above sea level (elevation), and a compass so you know your way home in case you get lost out bush. It also comes with power windows, power mirrors, and even a button-operated sliding rear window so you can tell ol’ bluey to stop barking at sheilas.

The stereo looks a bit dated, as is often the way with some Japanese vehicles, but as a light commercial truck, the sound quality is acceptable. While it does its job, it’d be nice if the dash console area was a touch more up to date with current technology, by featuring everything in one unit rather than buttons and options spread down the dash fascia, after all, these large 4×4 utes aren’t cheap. 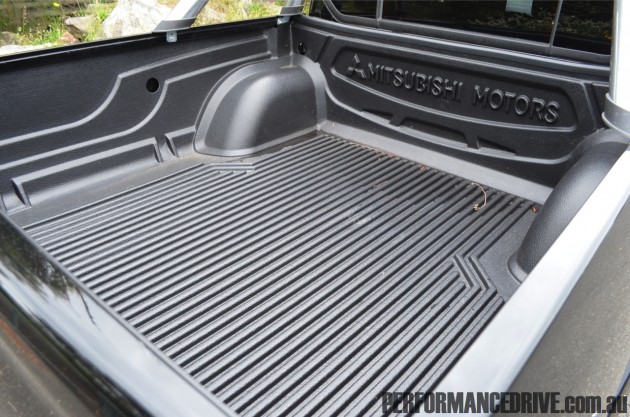 The Triton in our opinion is one of the better looking of the bunch, it has curves in the right places, and even a face that appears to be smiling… in a Mitsubishi kind of way. It performs well, and is relatively easy to drive, though the five or so turns lock-to-lock might tire some people. It does feel as if it’s built to last, rather than cheap and tacky. Tough is a good way to describe it.

If you’d like a touch more luxury in your truck, then go for the Luxury Pack offered by Mitsubishi. For the extra $3100 you get leather seat trim with leather console, driver power seat with slide, height and recline, body-coloured side protection moulding, and the rear diff lock option. The list of available accessories for the dual-cab 4×4 Triton GLX-R is pretty much endless – you can view the full range of Triton accessories by clicking here.

In the end, like with any new car you buy, it comes down to personal preference. The new-generation Triton is a thoroughly equipped and capable machine. Our advice, like always, is to test drive them all before you make a decision to make sure you find what suits your needs the best. 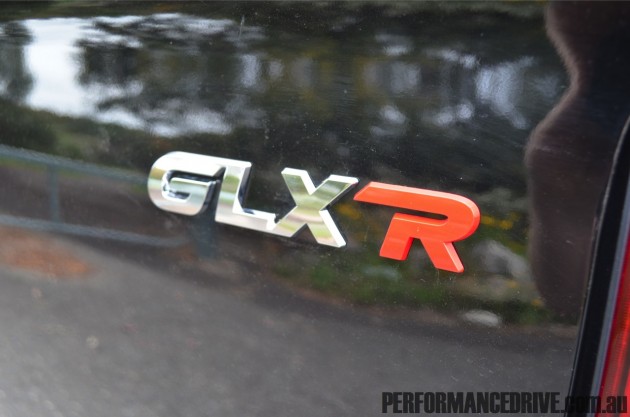