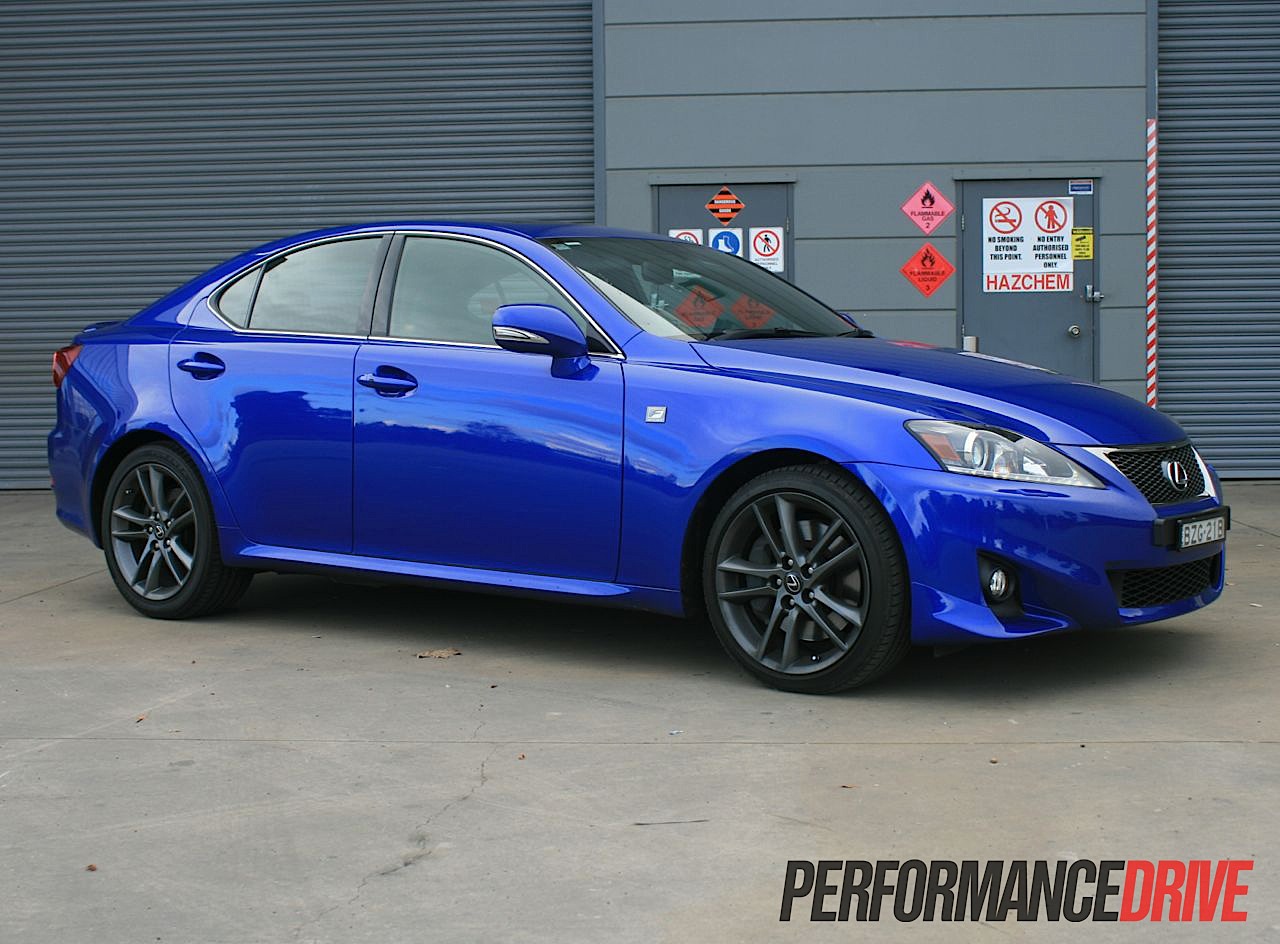 If you’re after a very quick, intelligent, and sharp-handling premium sports sedan, there are a few options on the market at the moment. The 2012 Lexus IS 350 F Sport is Japan’s offering.

It’s rear-wheel drive, one of the least expensive, and one of the most powerful options, but most appealingly, it’s the quickest to 100km/h compared to the key players. 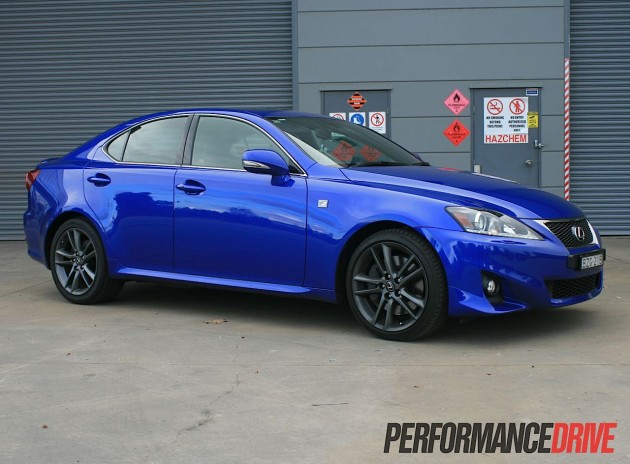 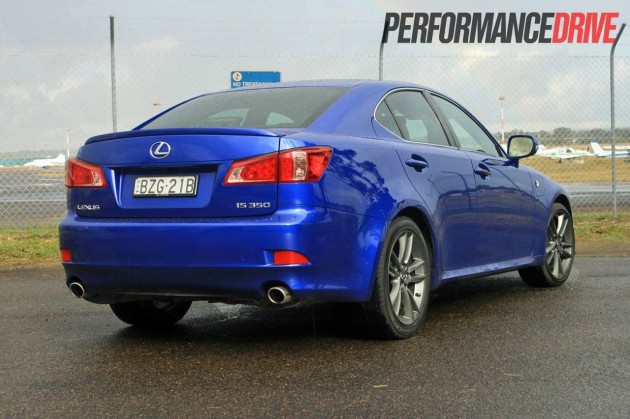 The Lexus IS is the company’s most popular model in Australia, but it has always been the follower to the three popular German rivals, in terms of sales. 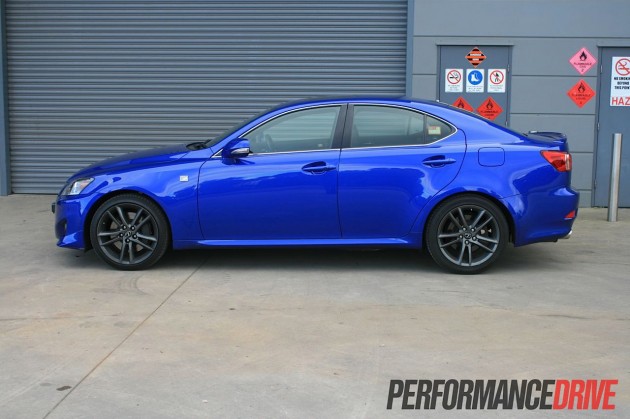 (In Australia, the IS 350 is available in three trim levels, like most vehicles in the Lexus showroom. They range from the entry-level Prestige, the racy F Sport, to the range-topping, luxury-focused Sports Luxury.)

The F Sport package brings a high level of performance to the premium sedan, helping it take on the sports versions of all the leading rivals. It can be distinguished by the F Sport aggressive bodykit which is inspired by the kit seen on the awesome Lexus IS F (review here).

In all IS 350 variants, power comes from a meaty 3.5-litre naturally aspirated V6 engine producing a class-leading 233kW and 378Nm (not including the limited edition Volvo S60 Polestar with 242kW).

While it does miss out on the eight-speed automatic seen in the high performance IS F, it does get a smooth six-speed auto with ‘S’ mode and paddle shifters. 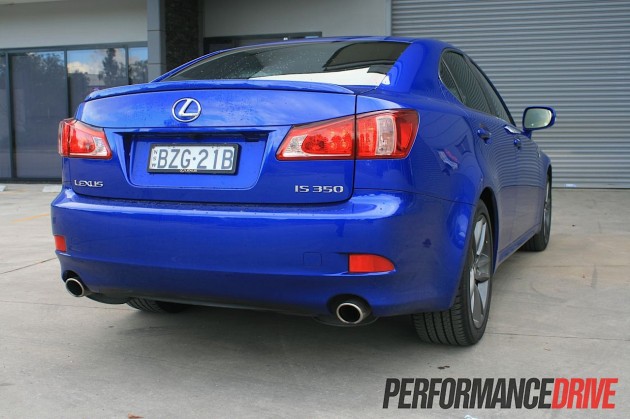 Standard features for the F Sport include sports-tuned suspension, bigger brakes, and a number of ‘F’-themed interior and exterior highlights.

Inside, there are a pair of electronically adjustable leather bucket seats, with heating functions, and two similarly bolstered rear seats with a third middle seat doubling as a flip-down table with cup holders.

The rest of the interior is a typical Lexus affair, with a fine cloth headliner, and hints of chrome and aluminium throughout the dash and door trims. There’s also a healthy dose of technology, chief among which is the multimedia touch-screen interface. It’s surrounded by main menu buttons around the screen. 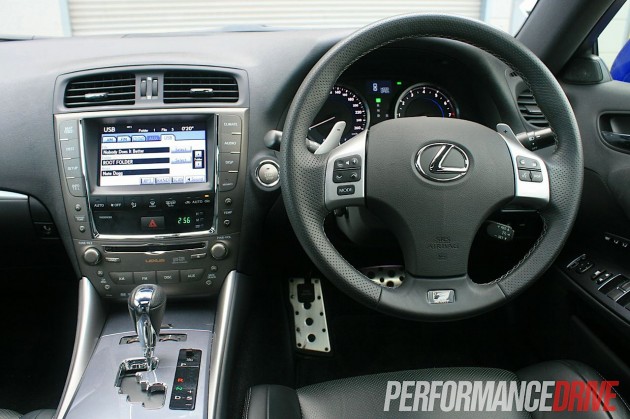 We found the controls and layout easy to understand, albeit slightly overwhelming at first. The satellite navigation system is quite easy to use as well, however, the software did seem a little dated, placing us in a field at times when we were actually on a relatively key road.

The overall interior is a little on the small side, in terms of this market segment. This is partly due to those comfy and highly supportive front bucket seats, which are almost identical to those seen in the IS F (without the ‘F’ embroidery). As a consequence, rear legroom can be tight if the front seats are slid back. 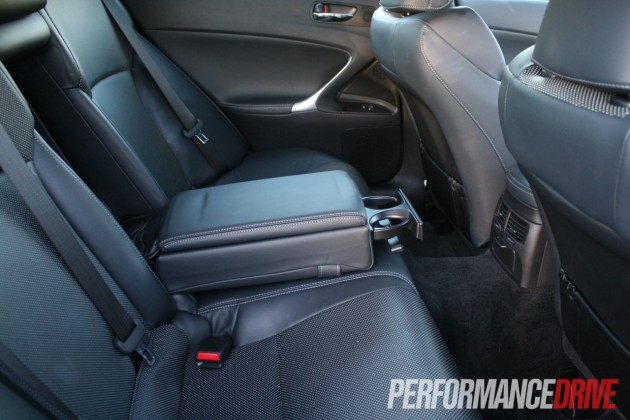 You could almost mistake the IS 350 F Sport for the full-blown IS F if you’re not careful. The kit includes a sharp bodykit with front and rear spoilers, an aggressive black mesh front grille and gaping air intakes, and 18-inch dark grey alloy wheels – swapping the twin five-spoke wheels for IS F mesh-style items could easily fool those in the know.

Obvious highlights which are diluted on the F Sport over the IS F include the twin-outlet exhaust tips – as opposed to the quad setup on the IS F – and the slightly less bulging bonnet, particularly towards the front. 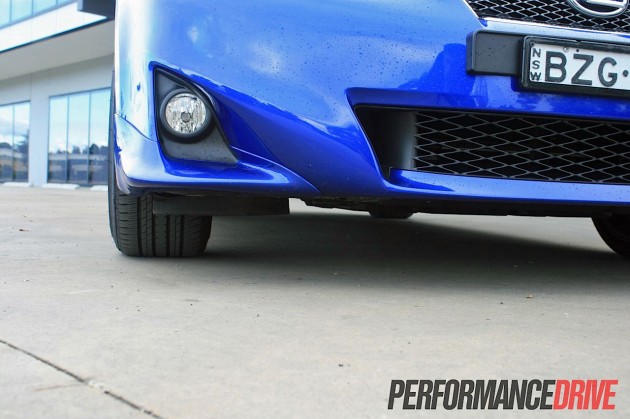 We think Lexus has done a good job with the styling, and despite the foundations being eight years old, the F Sport manages to fit in well with the rivals. It’s not over-the-top in any one area, while front and rear proportions flow and blend in well with Lexus’s current design language.

As for safety, a three-mode Vehicle Dynamic Integrated Management (VDIM) traction and stability control system – with Power and Snow driving modes – will keep you out of trouble, while eight SRS airbags, ABS with electronic brake force distribution, and Lexus brake assist will try and reduce the blow if things get out of hand.

Australia’s ANCAP has previously awarded the IS five stars, but it hasn’t tested the 350 variant specifically. In 2005, the IS achieved 33.4 out of 37 overall. 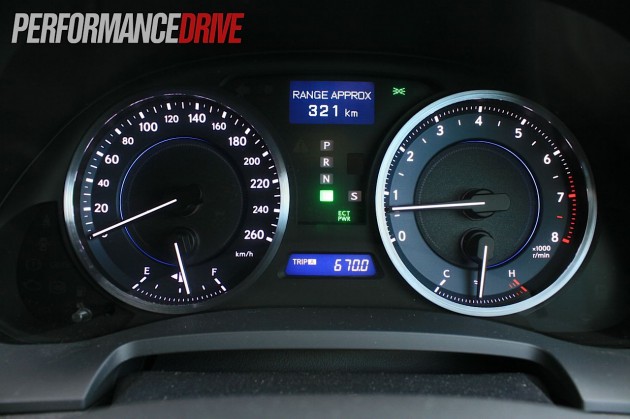 It may not be the snorting and grunting IS F, but the IS 350 F Sport is definitely not to be taken lightly. The 233kW hits hard when the accelerator is pushed to the floor, resulting in an almighty shove in the back, which keeps on shoving until you very quickly realise you’re breaking the law.

We clocked 0-100km/h a number of times, with the best result coming from building the revs while resting on the brake pedal. In the normal ‘D’ transmission setting, the sprint came up in a surprisingly brisk 5.47 seconds, and just 5.44 seconds by doing the same thing in ‘S’ mode.

This puts it as the quickest accelerating premium sports sedan currently on the market. And it feels as if it deserves every bit of that accolade. 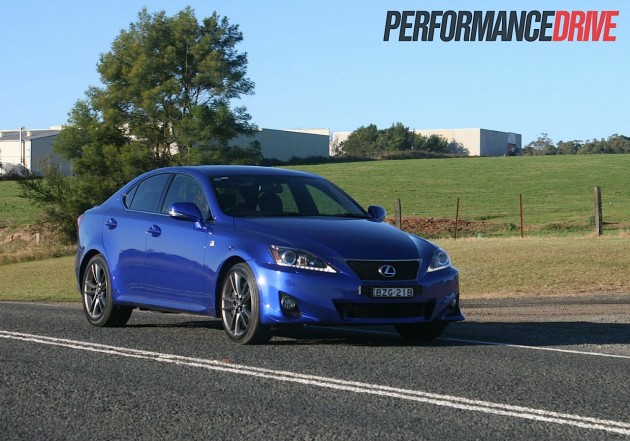 The specially-tuned suspension in the F Sport is firm, which is exactly what you should expect on a sports variant – some experts have criticised it for being too firm, but we think perhaps those critics are getting a bit long in the tooth.

The setup allows for sharp and direct handling, while the pinpoint steering gives excellent feedback on what the wheels are doing. If we had any criticism to the handling it’s that there can be a touch of understeer on longer bends when pushed.

This trait brings us to the traction and stability control system. It’s similar to the system used on the first-gen IS F, with the less-than-favourable electronic-type limited-slip differential. Even in PWR ECT mode, the systems don’t really allow you to change the attitude or shift the weight of the car very easily; the electronics come into play very early, well before any sort of fun or slip is experienced. 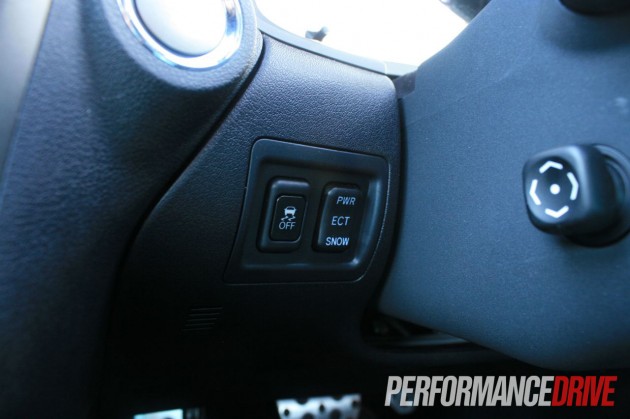 In terms of safety, the system is simply superb and virtually fool-proof. You can plant the throttle at the most inappropriate of times, and the electronics will reduce power, brake individual wheels, and generally sort out everything for you to make sure you get around the corner in complete safety and confidence.

If you plan on venturing to a track for example though, the systems are likely to become a little frustrating. It doesn’t allow for enough ‘play’, so to speak. And even if you turn the traction control off, the stability stays on, while the differential becomes an open-style diff. This means you’ll be leaving long single black lines of rubber on every corner.

Apart from these systems, the IS 350 F Sport is an engaging, well-sorted, confident piece of machinery. The fact that the chassis is engineered for a V8 – in the case of the IS F – you can feel it’s never working beyond or even near its threshold. 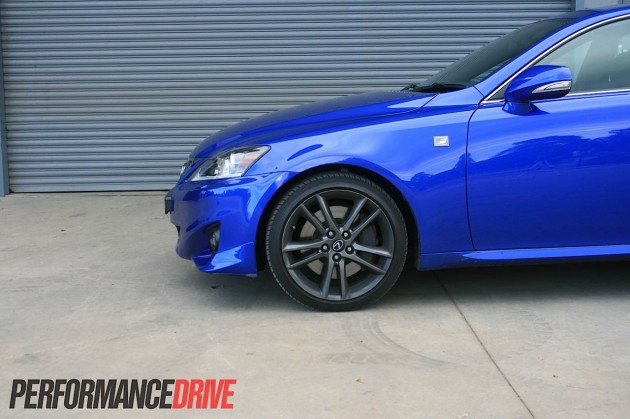 The V6 engine doesn’t sound quite as throaty as it does in the excellent new Lexus GS 350 (review here), however, it gives off a refined V6 roar. Using the paddle shifters will also get you a faint blip on the downshifts, adding to the eagerness of this powertrain combination.

It’s always good to see manufacturers fitting brakes that are more than capable, in relation to the potential acceleration and speed, onto their cars. And the IS 350 is a perfect case of this.

There’s no fade, while the initial bite is strong enough to send the rear centre armrest collapsing down onto the rear bench. Even at high speeds, the braking system is almost over-engineered for the car, and easily capable of wiping off speeds time and time again.

The only thing that makes this a hard one to pick is the rivals in this class. The new BMW 335i with its twin-turbo inline six, both quick and fuel efficient, to the interesting Volvo S60 T6 with its all-wheel drive and very nice interior; there are plenty of good options in this category.

If you want the quickest out of the lot, the 2012 Lexus IS 350 is what you need. It offers proper grin-inducing levels of acceleration – it’s as quick as some of the much more expensive dedicated sports cars on the market – while the F Sport with its aggressive bodykit and athletic suspension and highlights only add to the definitive sports sedan formula.

If you’ve always loved the IS F but can’t quite stretch to that price bracket, the IS 350 F Sport brings similar levels of performance and speed, and looks, at half the price. An excellent all-round performer. 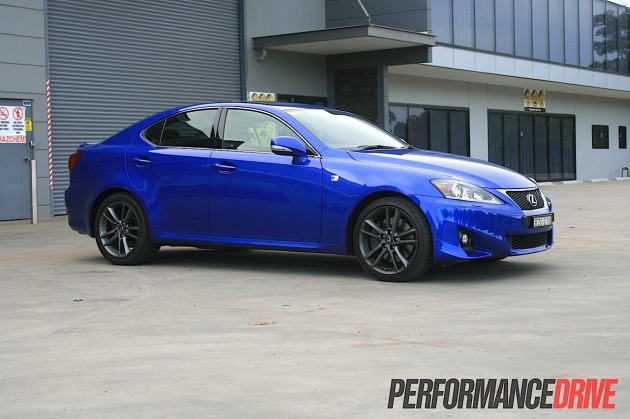