This is the all-new 2012 Lexus GS 350 Sports Luxury. It’s been designed as a sharper, more focused driver’s car than the outgoing model, and it’s also more intelligent, larger, and more powerful. Is it enough to better the rivals though? 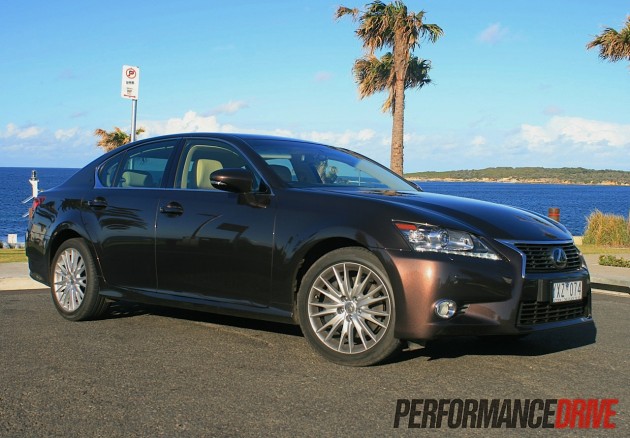 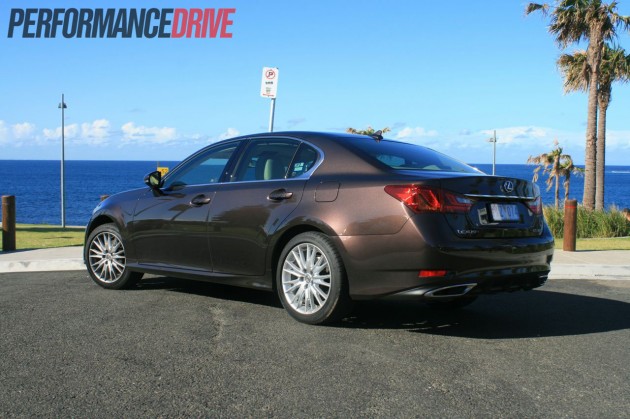 The previous generation GS wasn’t really regarded as an enthusiastic, sports touring sedan. It was more of a luxury-centric proposition for wafting along the highway. For this new model, engineers have worked long and hard to really advance on the old personality to create a much more dynamic grand tourer, ready to take out the competition. Its main rivals are the BMW 5 Series, the Mercedes-Benz E-Class, the Audi A6, and the crisp new Jaguar XF.

For the new model, Lexus has increased the structural integrity of the GS by 14 per cent over the outgoing model, blending in all-new suspension – now a multi-link setup at the rear – and electric steering. 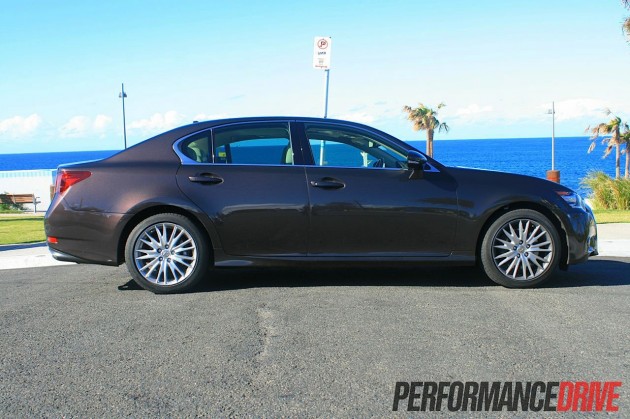 All of the major components, most of which are electric in some way or another, are entwined in what Lexus calls Vehicle Dynamics Integrated Management (VDIM). This means every aspect of the car is communicating with the other.

The Adaptive Variable Suspension (AVS) for example works with the electronic rack and pinion power steering. The settings of these can be altered via an in-cabin control called Drive Select, with ECO, Normal, Sport and Sport + modes – we’ll go into more detail on these later on.

Not only is the new GS more advanced, it’s also larger, with 25mm more rear headroom, 20mm more rear legroom, and a bigger boot now capable of swallowing 530 litres, over the previous 430 litres. 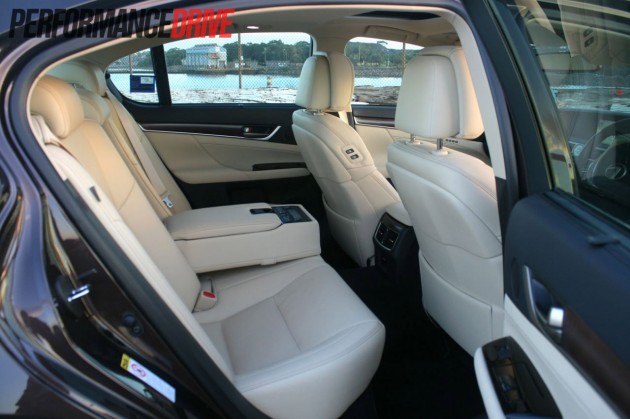 Each variant is available in three different trim levels; the Luxury, the F Sport, and the top-line Sports Luxury (as tested).

So what does the 2012 Lexus GS 350 Sports Luxury come with? Well, let’s start with the huge 12.3-inch widescreen interface. It’s the biggest ever standard screen to come in a car, and it provides a display for just about everything. 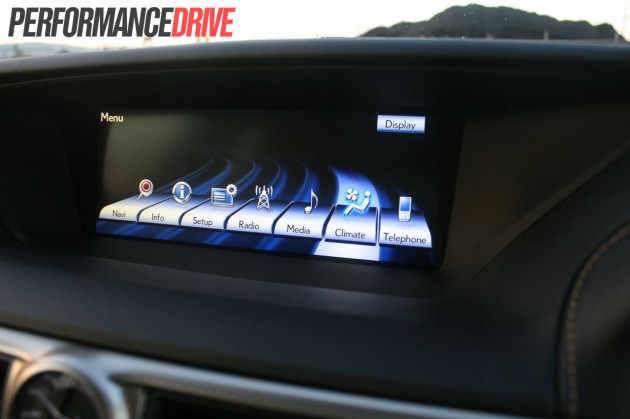 You navigate your way around the split screen using a mouse toggle called Lexus Remote Touch which sort of slides in all directions. It goes further than working like a conventional computer mouse. It’s sensitive to the options on the screen, and jumps from option to option for you, changing with every screen you select.

It might sound complicated but it’s actually very easy to use and the mouse sits perfectly at arm’s rest on the centre console. There’s two main buttons at the top of the pad allowing you to quickly jump to the main menu, or bring up your current location via the map button. 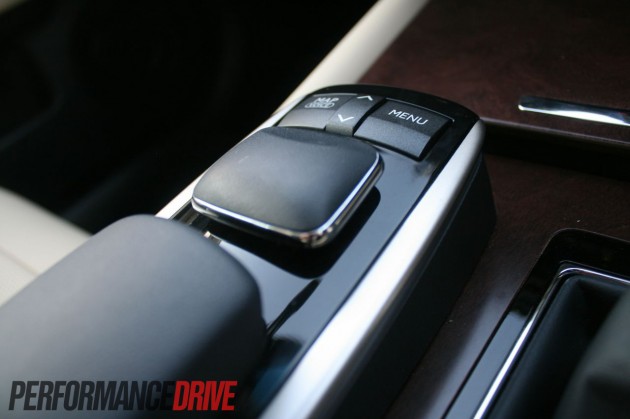 Inside, the new GS is a fine place to be. It’s luxurious without going over the top, but it’s also airy and fresh; it almost feels like you’re sitting in a modern lounge room. The three-spoke sports steering provides that connection to sportiness, and features real wood trimming, matching the inserts on the dash and door skins.

The seats are some of the most comfortable we’ve come across. In all variants they are electronically adjustable in 12 different ways. You can adjust lumber support at two different levels, and you can also have the side bolsters squeeze you in for more lateral support. Even the top half of the seat back can be pivoted back and forth. 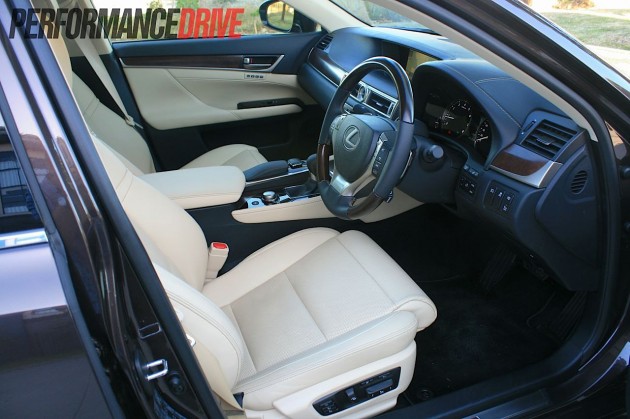 Using the electric adjustable steering wheel, and lowering the seat down, you can find that perfect hunkered-down driving position. For shorter types, it is a bit harder to find the absolute perfect position, but with so many adjustments, you just have to keep fiddling and you’ll eventually get there.

For the new model, styling has really stepped up more than a notch. It’s fresh and sharp, and quite modern. There’s LED daytime running lights under the headlights, that new spindle grille layout shared on all modern Lexus vehicles, and nicely proportioned lights and details.

From the back, the sword-like twin exhaust outlets and small diffuser fins give the GS a sporty stance, while the chrome trimmings match the badges, reconnecting with that prestige and luxury side of the GS. 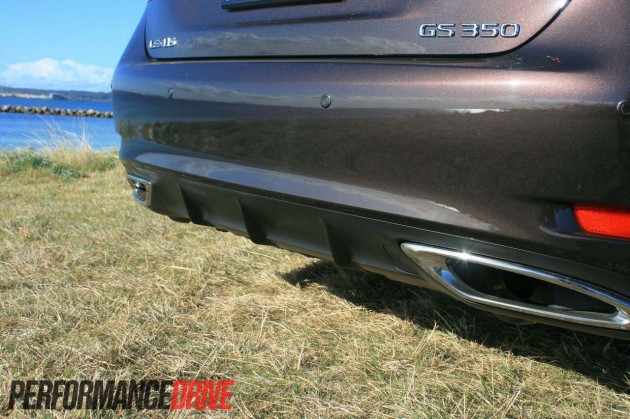 As far as safety goes, the 2012 GS 350 comes with all the electronic driver aids available in this current day and age. The standout, however, is the radar-guided cruise control. We tested a similar system in the Lexus IS F review last month.

Put simply, a radar mounted in the front end of the car is able to measure a safe distance between it and the car in front, and will adjust the car’s speed to maintain that distance automatically, even applying the brakes. We tested the system following a car up to a set of lights, again, and it will brake quite hard, but only down to 40km/h. Anything under that and a warning buzzer will sound, leaving you to bring the car to a complete stop.

It’s a very smart system, the only problem we feel is that it could increase your fuel consumption. Let us try to explain. Say you’re driving along the freeway with no cars in front of you – or the next car in front is too far for the radar to pick up – and someone overtakes you, and then pops into your lane in front. 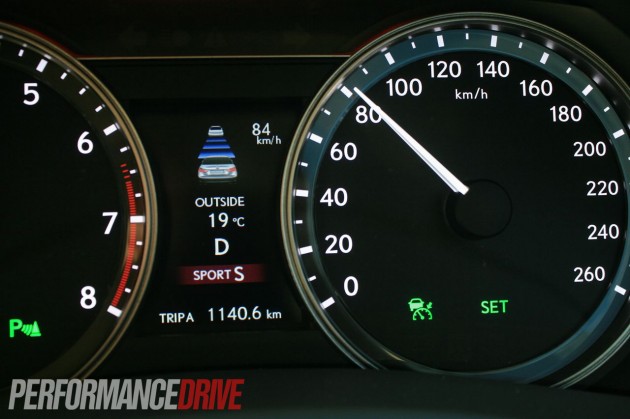 The radar will notice the car and apply the brakes slightly to ensure that safe distance is kept. The car that has overtaken you is still travelling a bit faster than you though, so it edges further in front and out of the radar buffer zone. The GS then accelerates back up to speed. In this situation, which does happen quite a lot, the system brakes from 110km/h down to 100km/h, for example, and then accelerates back up again, for practically no reason.

This technology is a great step in the right direction though, and is capable of wiping off higher speeds in emergency situations very well, potentially, quicker than you and me can react.

The new GS also comes with two-piston front and rear brakes, and an emergency LED centre brake light which flashes under heavy braking at speeds over 55km/h, and during forces of over 0.7g. That figure alone of 0.7g gives an indication of the braking performance.

Other safety features include 12 airbags, including driver and passenger knee airbags, and head airbags for front and rear passengers; basically, crashing would be like falling into a pile of cushions. Australia’s ANCAP is yet to test the new GS, but it has previously awarded the old model five stars. Europe’s NCAP is also yet to test the new GS.

It’s hard to imagine this large luxury sedan as a sprightly point-to-point hustler. It really is though. Flick the adaptive suspension setting over to Sport + and the GS turns into a real driver’s car. In this mode, the steering and throttle response is made more sensitive, and the suspension is firmed up.

There’s no other word to describe the suspension, it’s perfect. In Sport + it manages to provide both a supple and compliant ride, however, tackle some bends and dippers with speed and the rigid chassis, and well-tuned dampers will take everything in their stride. 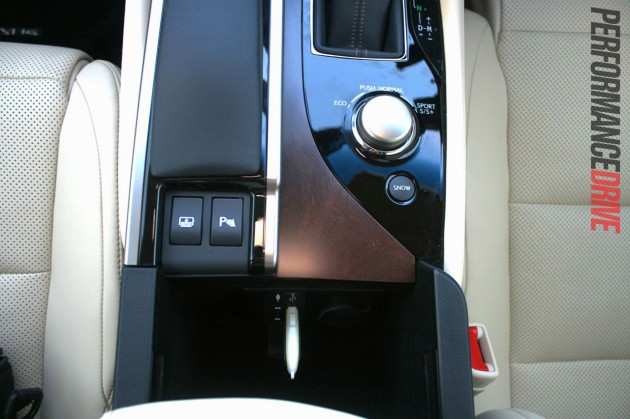 During our test drive on our favourite route there is a number of bumps that we know can unsettle cars to a degree. Some cars almost bottom out, while others handle them well but let you know about it with a jarring jolt through your entire body – a bit like collapsing straight into a lounge. And some cars, not many, but some catch the bumps like a wicket keeper catching a sky ball.

The 2012 Lexus GS 350 in Sport + mode is one of those rare cars. It’s like a sponge, it will absorb everything without making a big deal about it.

There’s minimal body roll too, and the platform remains direct and confident. In our opinion, the suspension is right up there with the best of them, including the BMW 5 Series with the M Sport package.

The electric steering isn’t the most precise you’ll come across, but it is very nicely weighted and gives good feedback; you know exactly what the front wheels/tyres are doing. It also manages to give you a clear indication of how the rear end is pivoting around the corner.

We didn’t get a chance to do it, because we were on public roads, but it feels like you could easily point the nose into a corner, feed in the throttle, and let the rear end swing around for a nice controlled powerslide.

And this is all from a large luxury sedan. 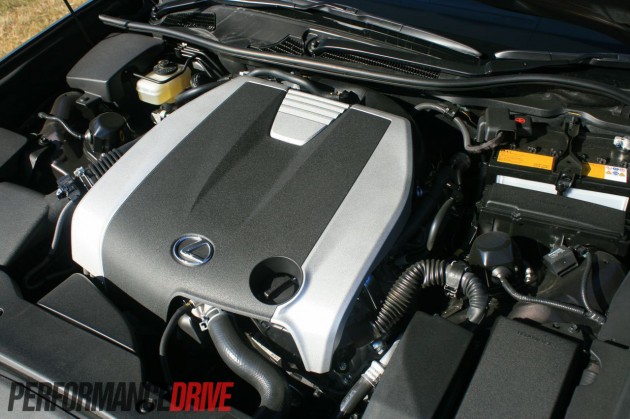 There are other signs that hint towards true sportiness. The engine note, for example, is simply awesome. It sounds like a roaring VTEC. It’s just a 3.5-litre naturally aspirated V6, but thanks to the variable valve timing, an acoustic control induction system (ACIS), and a high compression ratio of 11.8:1, the engine gives off a proper growl, almost like a small capacity V8. The noise starts from around 3500rpm, and from there it gives off a throaty roar up to the 6500rpm redline.

We timed 0-100km/h in 6.3 seconds, which is a bit off the factory time of 6.0 seconds. The problem we had was getting a decent start. The best way we found was to simply step off the brake and nail the throttle – as opposed to building the revs first. It gathers speed quite quickly, using the somewhat long gears to wind out the revs.

As usual with Toyotas, the six-speed automatic transmission in the GS is excellent. It’s smooth and comfortable in slower traffic conditions, while it’s also fast and blips the throttle on the downchanges when you flick it over into manual mode. In auto mode it also downchanges while trailling the brake.

Overall, the GS 350 is a satisfying driving experience; you’ll likely hop out happier and more relaxed than when you jumped in. 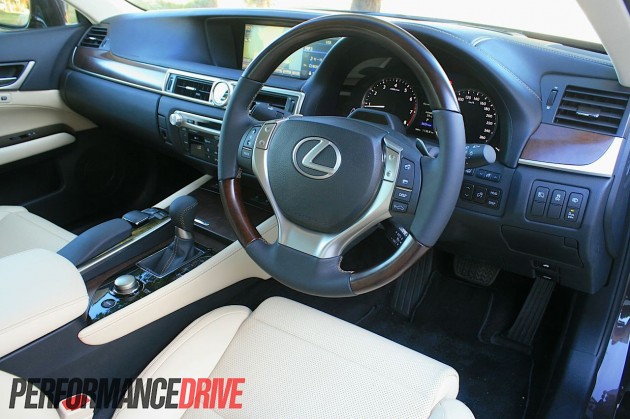 Lexus has created a very good luxury grand touring sports sedan with the new GS. It’s masculine and modern to look at, very intelligent inside and out, and it handles wonderfully; both as a comfortable cruiser and a mountain road sprinter.

The interior is a great place to be, offering a fresh airy environment, blended with lots of technology, not to mention that huge 12.3-inch screen.

However, the best part of the new GS is in the way it feels. All the materials are nice to touch and the leather is ultra soft, sure, but out on the road, it just feels right. It’s a bonus that it’s also very capable and up to the task when you feel like being Sabine Schmitz.

The only problem we can see with the 350 is that it does tend to chew fuel. Other than that, the GS is not only up to the standards of its rivals, but it betters them in some areas, particularly with the interior. 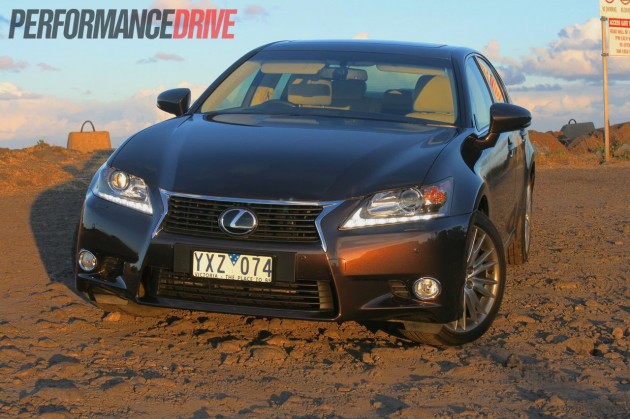