As a follow-up to the spy images Jaguar released last week, the company has now put out a 2012 Jaguar XF Sportbrake wagon Christmas card, teasing the new variant’s rear end styling and capacity. 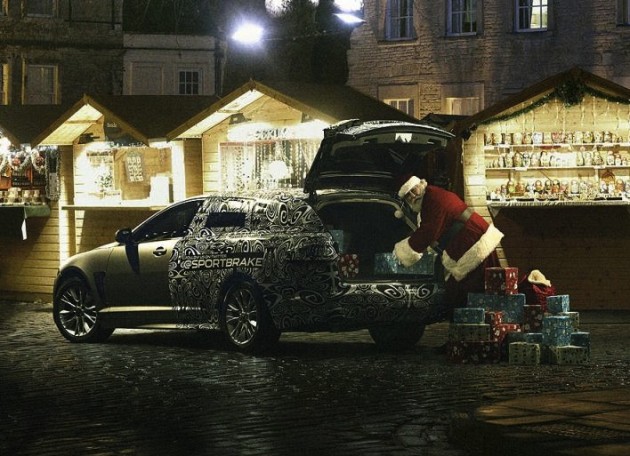 Is Jaguar hinting a large rear cargo space for the upcoming 2012 Jaguar XF Sportbrake? Santa appears to have no trouble stocking up the Jag with plenty of presents. When it does hit the market next year, it will be the first time Jaguar has offered a wagon since the Jaguar X-Type went off the market in 2009.

It will want to be fairly decent in size, the rear compartment, as the new model will go up against rivals such as the Mercedes-Benz E-Class estate, BMW 5 Series and Audi A6 wagon variants, all of which lead the market in the European sedan-based segment.

As previously reported, the 2012 Jaguar XF Sportbrake is expected to be powered by the same lineup of engines as the normal XF sedan. This includes everything from the new 2.2-litre turbo-diesel to the top-spec supercharged 5.0-litre V8 with 375kW.

It is a bit hard to make out the rear end design and shape in this image, as the disorienting colour scheme conceals the panel contours rather well. All will be revealed at the 2012 Geneva Motor Show in March. Stay tuned for more updates.