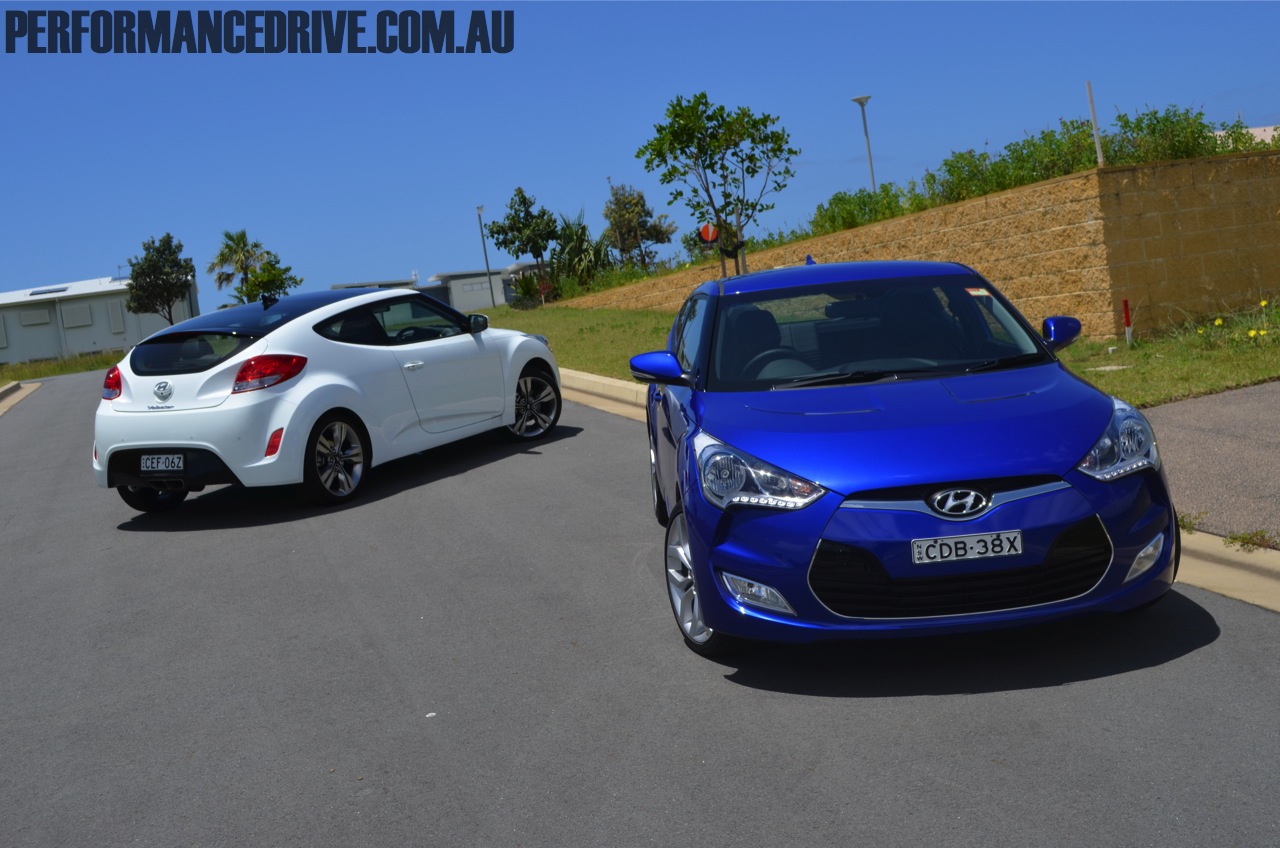 Welcome to the all-new 2012 Hyundai Veloster, Australia’s new entry-level sports car. It isn’t a coupe, nor is it a hatch. Instead, it’s a one-door on one side and two on the other contraption. And it’s the direct result of Hyundai’s “New Thinking. New Possibilities” philosophy. 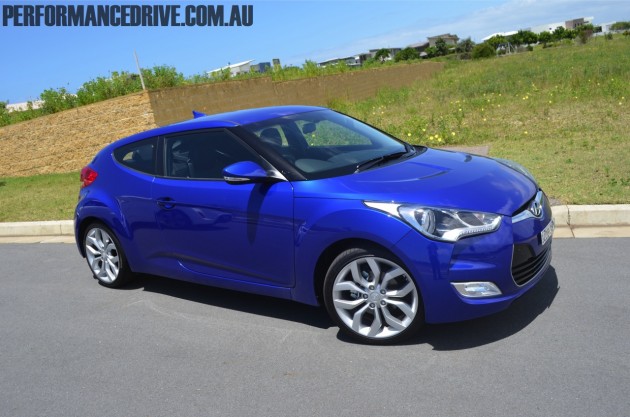 The South Korean company is specifically targeting the ‘Gen Y’ market with the Veloster, and young people who’re in love with things like social media, being trendy, and trying things that are a little different. The Veloster is also being pitched to those that are ‘young at heart’.

Two models are on sale in Australia; the base model Veloster and the Veloster Plus. Both come with an amazing array of standard kit, some of which is normally only affiliated with higher priced vehicles. 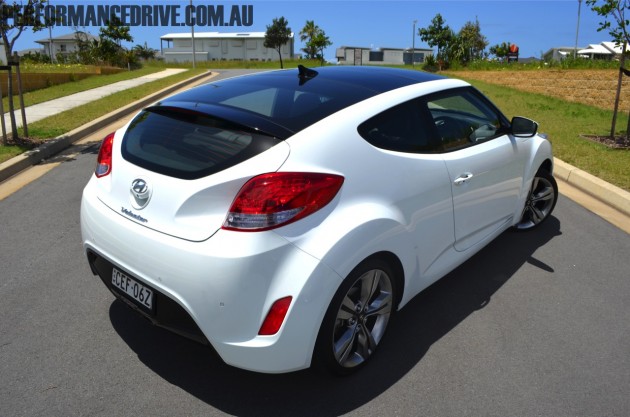 It’s not only the company’s new entry-level sports car, it is also the first ever Hyundai to be fitted with a dual-clutch transmission. The gearbox itself was designed and fabricated in-house at Hyundai, which means we’ll no doubt see this technology slowly trickle into other models in the company’s lineup in the near future. 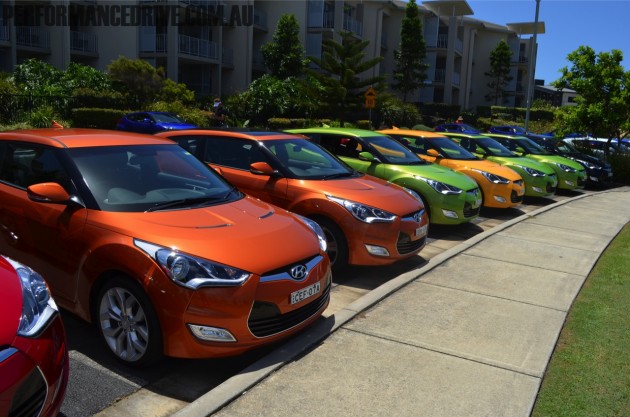 Walking up the Veloster, we couldn’t help but think ‘hot rod’. You could say it kind of looks like a life-sized motorcycle helmet, with the blacked-out A-pillars joining the front and side windows to look like a tinted visor.

The Veloster shares platforms with the new Hyundai Elantra, and the next-gen Hyundai i30, however, the body is all new. The roof sits low, sweeping back to a rather bulbous rear. In Veloster Plus guise, the full glass sliding roof continues the black contrast of the A-pillars.

Both front and rear wheel arches are bolstered and muscular in design, making it look as though it comes direct from a WRC meet. The heat extraction vents in the bonnet might be pretend, but they still add a sporty touch to this very clever hatch. 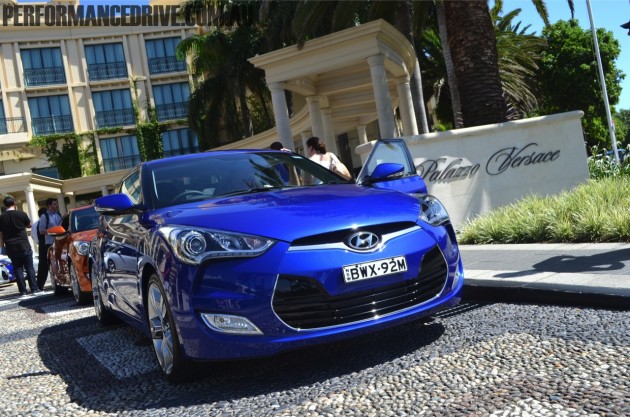 The front headlamps look a treat, stretching from near the front grille to all the way past the centre of the front wheel. The front bumper is shaped with Hyundai’s new trademark hexagonal grille, with some chrome and black highlights thrown in for good measure.

The tail lamps are LED items on both trim levels, and look the trick during braking and nighttime driving. The centre exit exhaust tips blend in with the Veloster’s youthful, sporty character too.

Both Veloster and Veloster Plus come with 18-inch alloys. Veloster Plus gets trendy colour-coded inserts standard on a five-spoke design, with the base model’s twisted 10-spoke format still looking pretty nifty for an OEM item. 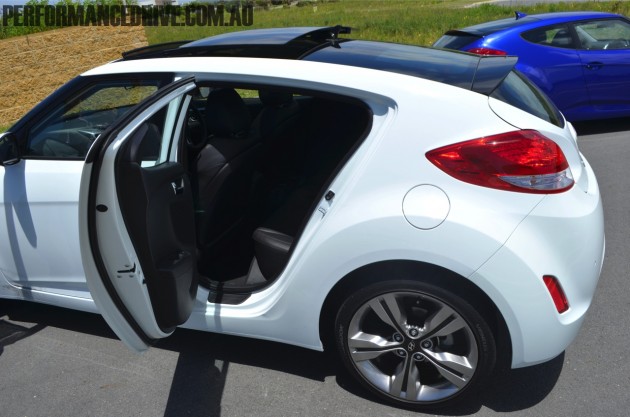 Overhangs front and rear are short, which helps with parking, and judging your way through traffic in the city. The layout is also regarded for sporty driving and stability.

If you walk around the car, you’ll notice the B-pillars aren’t aligned; this is to allow room for the rear door on the passenger side. To drive, you get the feeling you’re in a coupe, and as a passenger, you feel as if you’re in a hatch.

Interior wise, both variants of the Veloster are equipped with comfortable sports seats, and a height and reach adjustable steering column, providing an easy-to-find amicable driving position. If you’re over 6-foot though, you will encounter problems sitting in the back, and some in the front of the Veloster Plus because of intrusions of the glass roof. 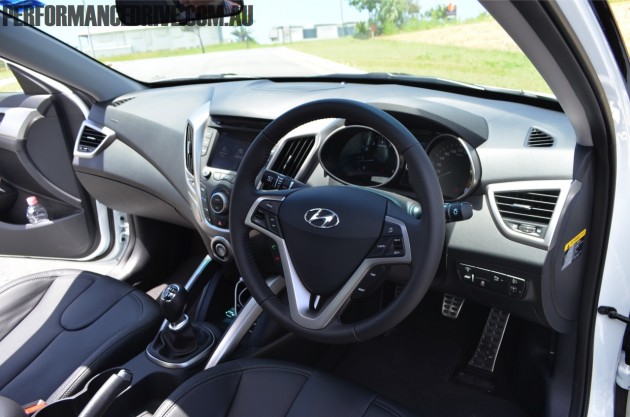 On a quick glance around the cabin’s plastics and materials, it’s filled with just about every grain texture you can imagine, with quality levels well up in the market standard.

Creature comforts like air-conditioning and power windows are all easy to locate and use. The style of the centre dash facia looks funky, and is said to be styled off the front of a motorbike – after a decent look, you can see the similarities.

In the two or so hours we spent driving and being passenger in both trim levels of the Veloster, it’s fair to say that it is quite a little performer. Our cruise route ran from the heart of the Gold Coast, through some of south Queensland’s mountainous roads, into NSW, and then to South Kingscliff. 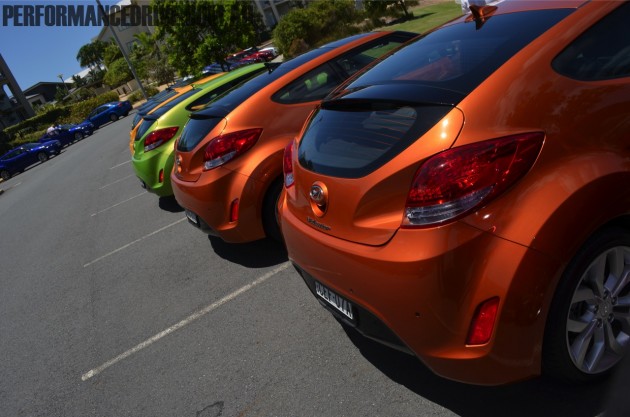 The 1.6-litre GDI petrol engine isn’t going to blow your socks off, but it’s comforting to know the chassis can handle a lot more – behold the Veloster Turbo, due to land in Australia during the third quarter of this year.

Peak power of 103kW isn’t reached until 6300rpm, while the peak torque of 166Nm is achieved at 4850rpm. During enthusiastic driving, this means you have to keep revs well above 4000rpm to get the most out of it. The redline is just shy of 7000rpm.

Both cars have exactly the same (Sachs) suspension arrangement and spring rates. Regardless of transmission or trim level, both the Veloster and Veloster Plus’s handling dynamics were more than surprising. 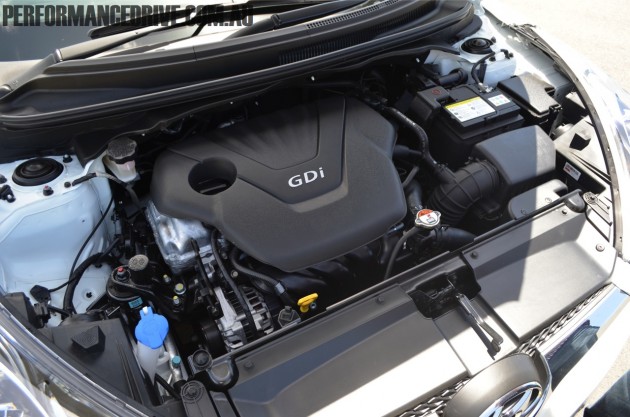 On corner entry, the Veloster finds a groove, load up its suspension, and then sits flat, allowing you to carry good corner speed, and even accelerate out with great precision. At times, you can’t help but think, ‘some more power would be good’.

Understeer is present, but only if you are really pushing the boundaries, and even then, it’s predictable. On more than one occasion on our test route, we faced rather large, mid-corner bumps. The suspension did a fantastic job of keeping the car settled, and the steering was never thrown out. The rear didn’t bob about either, and there was a solid feel of all four wheels planted on the road.

Simply driving it, you can tell Hyundai has spent some time tuning the car specific to Australian road conditions. As a result, the Australian model has seen its Sachs suspension dampening rates increased by around 15 per cent. 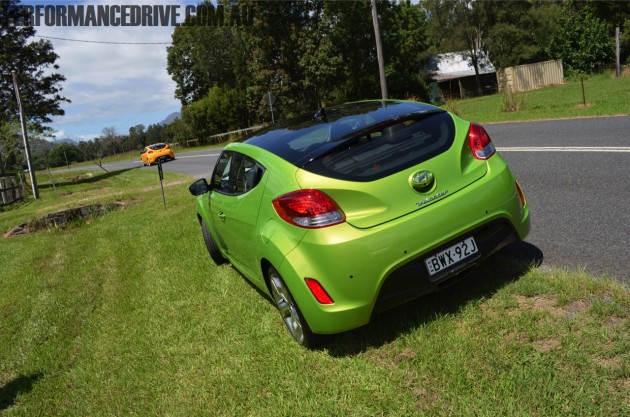 As you just read, the suspension is pretty well sorted, as for what the steering feels, let’s just say it’s well-weighted, easy to use when parking, and not too light in the bends. But, it does feel a tad like you’re steering through an Xbox game; it’s somewhat artificial. But hey, so do a lot of new cars on the market.

Hyundai has itself a nicely balanced vehicle that does impress in the city, and on the back roads. We’ll be able to give you a much better impression in our upcoming full review. 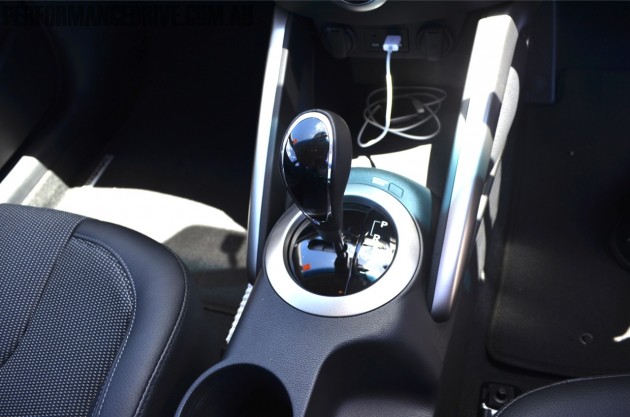 Once we got a chance to slip the gear lever into sport mode (there are no visible markings on the gear lever to tell you where S mode is, we just took a punt and pushed the lever to the left of D) we put the 1.6-litre engine to work.

As you click through the gears, changes in the DCT are quite fast on up shifts, but perhaps a tad slower on down shifts, as if it drags a tiny bit. The slight lag is not enough to ruin the experience though.

You can either chose to manually change the gears up and down via the flappy paddles located on the steering wheel, or by using the gear lever in a down and up flick. 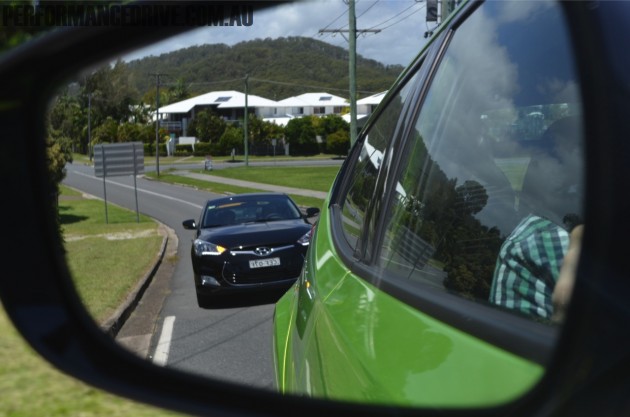 For driving around town, leaving the transmission in D does a good job of providing enough power to sift through traffic, while conserving fuel at the same time.

From what we could grasp during our time in the manual variant, you can really feel the character of the Veloster’s very keen handling dynamics right away.

It doesn’t necessarily mean it’s faster through the bends, because there’s nothing like clicking another gear without upsetting a car’s balance, but it adds a sporty, involving element to the mix. 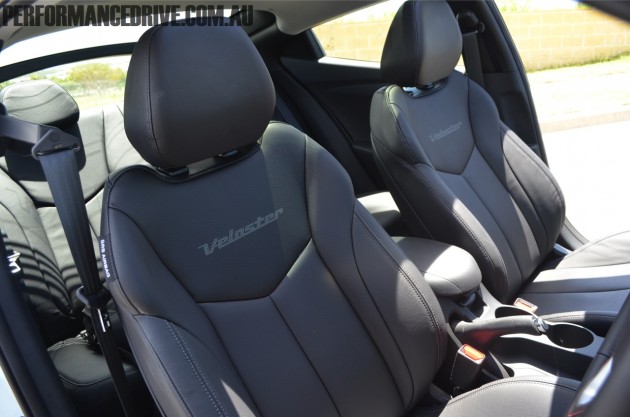 The gear shift is reasonably short and mechanical feeling. The clutch is light, but meaty enough to feel sporty (the word ‘sporty’ keeps coming up a lot, doesn’t it?).

When sifting through the gears, we noticed the 2012 Hyundai Veloster seemed much more happy to build the engine revs in the higher gears (fouth, fifth, and sixth), than it did in the lower ones. Whether this is because of ratios, or something installed into the tune, we’ll do our best to uncover it in the full review. 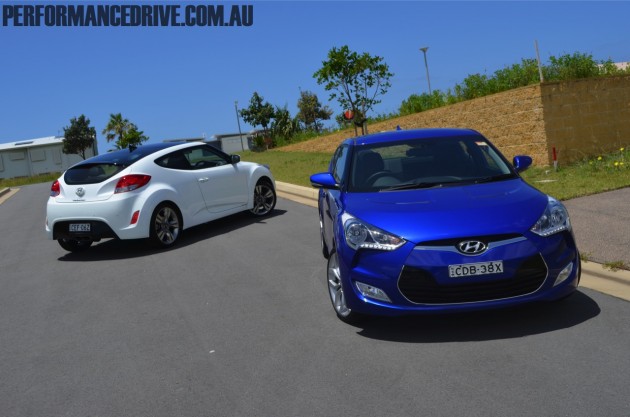 Overall, the 2012 Hyundai Veloster is a game changer. With an entry price of $23,990, you’re getting a lot of car for the money. In fact, you get two cars for the price of one; a coupe, and a hatch, depending on which side you see it from.

It sits almost $10,000 cheaper than the 2012 Honda CR-Z, and makes around the same power, and in our opinion, doesn’t feel any less engaging to drive. It’s arguably better-looking, too.

Look forward to our full 2012 Hyundai Veloster review and video for more details in the very near future.