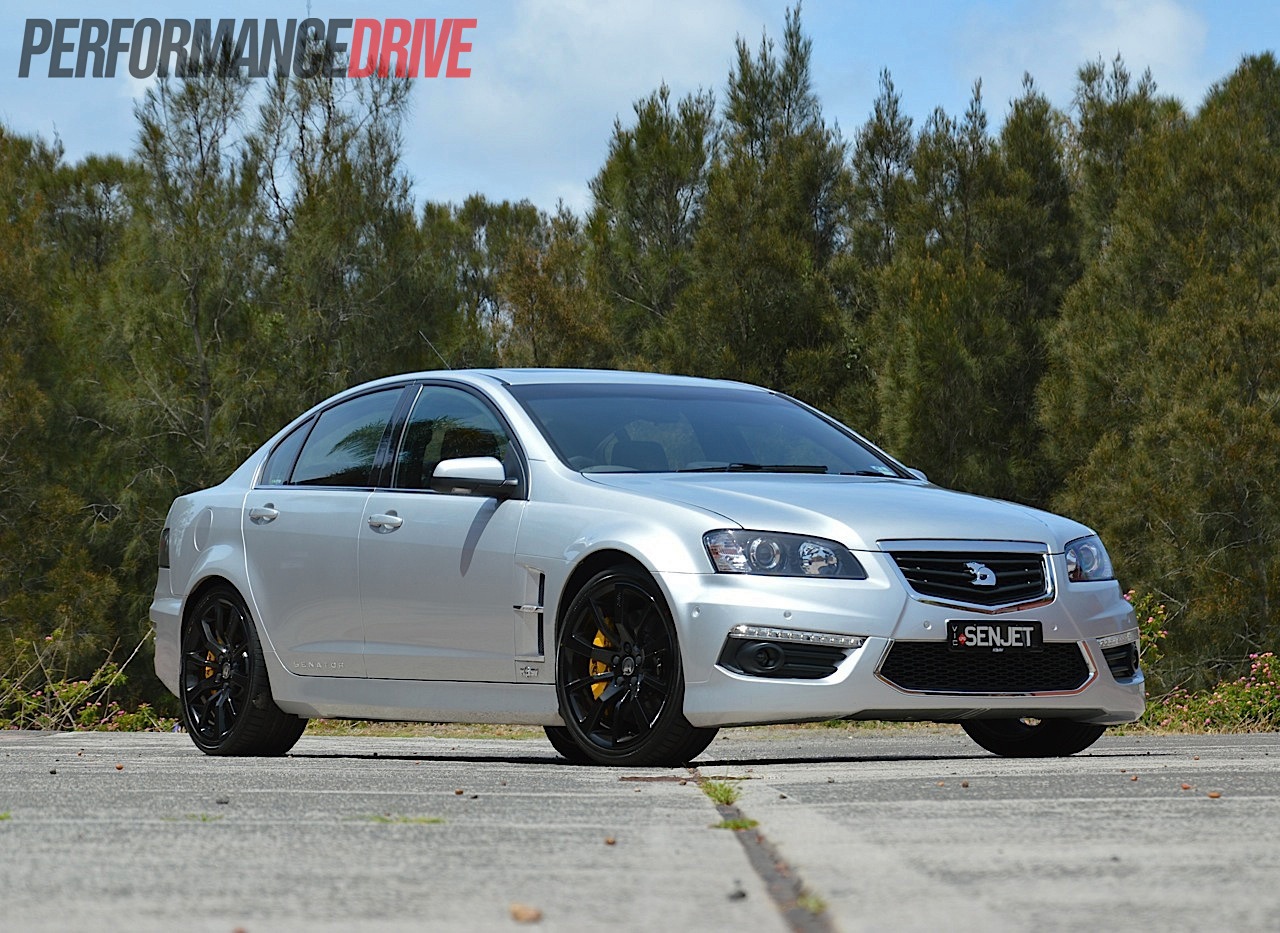 You’re looking at the most powerful factory LPG sedan currently on the market; the 2012 HSV Senator Signature LPI. It’s the businessman’s muscle car. 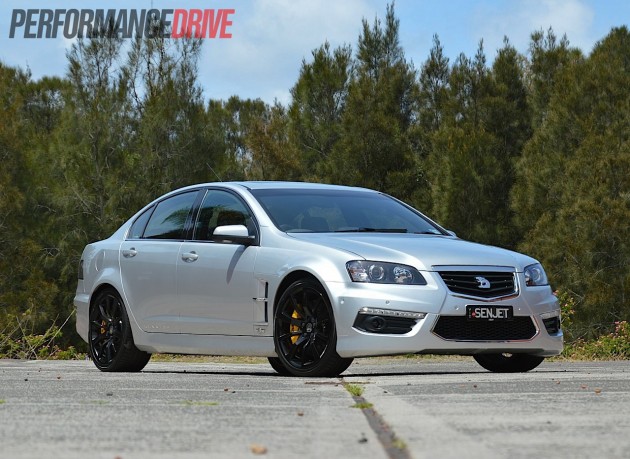 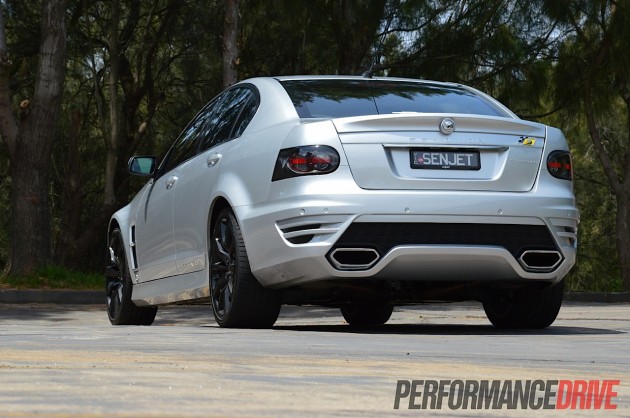 The Senator LPI could be the perfect means of transport for a travelling business type. It has the status and presence of a successful and powerful character, and it’ll get you there on time with bucket-loads of performance. It’ll also get you there again and again, with a potential range of around 800-900km (if you’re gentle).

Under the bonnet sits HSV’s most powerful current engine, the LS3 6.2-litre naturally aspirated V8 direct from Chevrolet in the US. It produces 325kW of power and 550Nm of torque. The LPG setup doesn’t change power or torque figures, in fact, HSV says the LPI system “improves engine volumetric efficiency, producing more power from less fuel”.

The LPI system is a new type of LPG setup. It injects LPG into the engine as a liquid rather than a gas, hence the ‘liquid propane injection’ LPI name. HSV has worked this into the flagship 435 horsepower business suit as a full factory install.

You still have the option to drive under petrol power if you prefer. To change fuel sources, there’s a rather alluring button on the centre console which looks like it belongs on a spaceship toy missile launcher of some kind. It swaps from LPG to petrol on the go. (The system always starts the car on petrol by default.)

The Senator Signature is the most expensive high performance Commodore-based vehicle on the market. It even sits above the popular and legendary GTS ($82,900), in terms of price. The only HSV that’s more expensive is the Statesman-based HSV Grange LPI ($94,980).

Prices for the Senator Signature LPI start at $92,890 for both six-speed manual and six-speed auto versions.

If you’re after a large car, the Senator certainly doesn’t disappoint. There’s heaps of space inside for five adults. And we mean five adults, including three in the back. The back seat also comes with a flip-down LCD DVD player for added long-distance comfort. 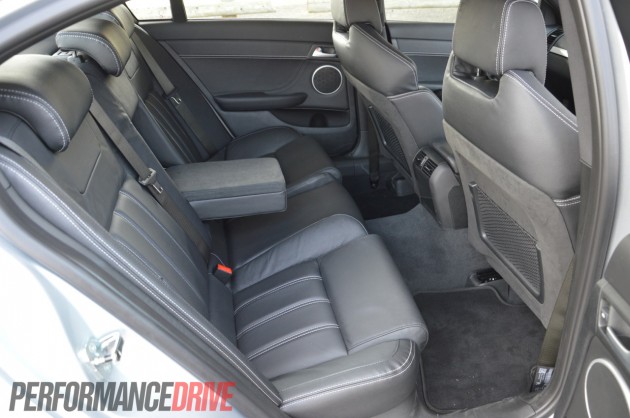 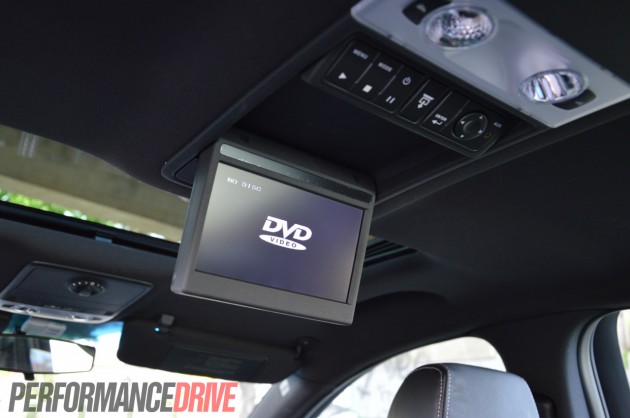 Each seat is covered in leather and features very sporty contours, with the two front runners providing lots of lateral support for both shoulders and legs. Both the front seats are electronically adjustable as well.

The driving position is quite good too, however, it’s not absolutely perfect, for shorter types anyway. It feels like the seat sits a touch too high even at its lowest setting.

Almost all of the in-car entertainment and functions are controlled through HSV’s latest EDI, ‘enhanced driver interface’. It’s a touch-screen job that is easy to use and navigate. 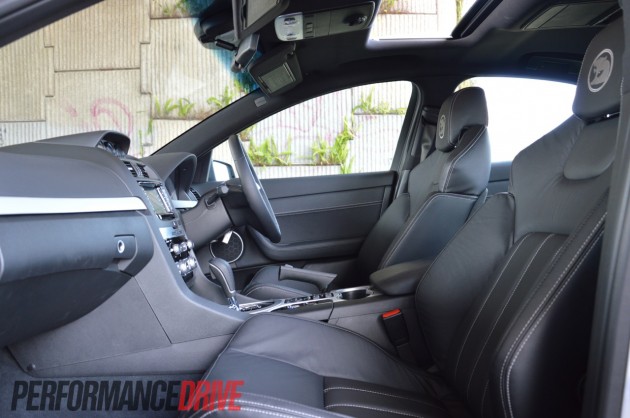 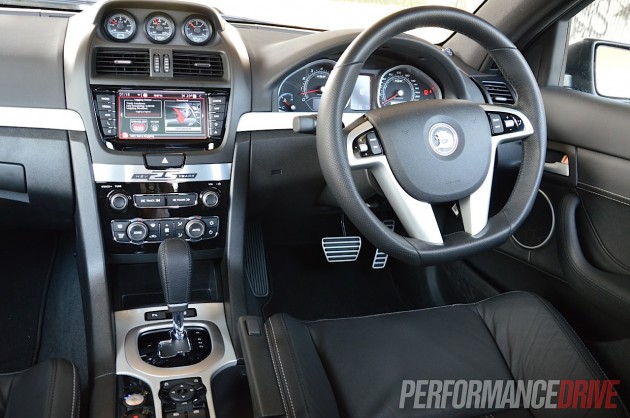 The EDI system is entwined into an 11-speaker stereo system which offers USB and MP3 compatibility. The sound clarity and bass is not quite as premium as other systems on the market in this price bracket, but who needs music when you have an LS3 and its 325kW V8 soundtrack at your disposal.

You will love the performance menus and options with the EDI unit. There’s instant torque readouts, various gauges, a race-car-like telemetry setup with instant throttle and brake pedal depression percentages, and a g-force gauge. 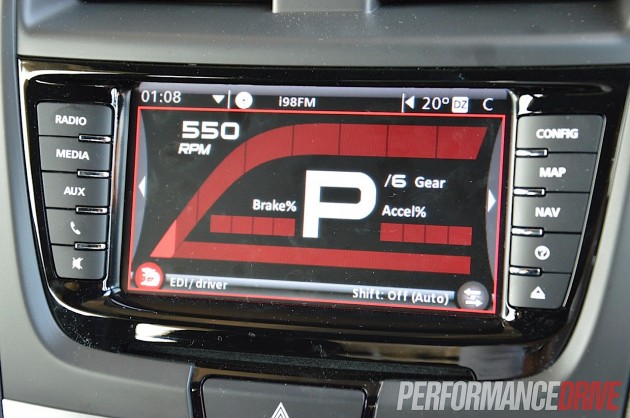 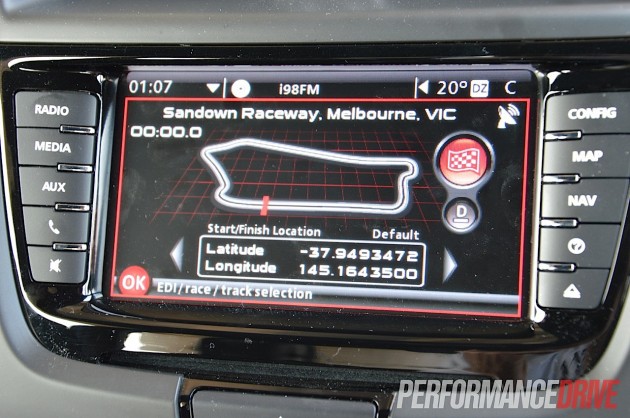 There’s also a track timer function, stop watch, and options for the bi-modal exhaust and magnetic ride control suspension. It’s all quite exciting and interesting to have a play around with.

In the very back, boot space is hindered due to the LPG tank. It’s still a very wide boot with a big opening, so you can get a set of golf clubs in there with no problem. You won’t be feeding a surfboard through to the back seats any time soon though, obviously. 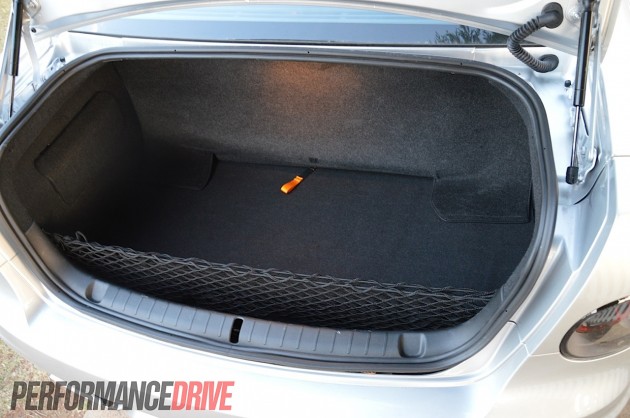 If the GTS is the loud boy in the class that’s always getting sent out, the Senator Signature is the quieter kid that sits up the back. He still instigates and is part of most of the mischief, but he does it in a more discreet manner.

When you look at the exterior you might think it’s pretty loud. But in comparison to HSV’s showroom range, it is relatively sedate. There’s no huge wing at the back for starters, instead there’s a neat lip spoiler, while the front doesn’t have vents and scoops sprouting out from the bonnet. 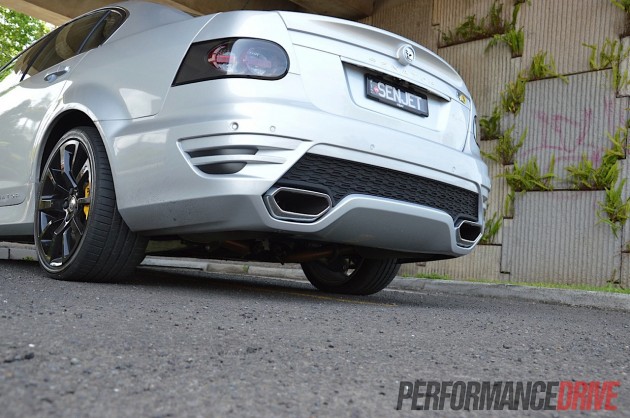 From the back is where things get aggressive, with two elongated hexagonal chrome exhaust tips nestled outside a large swooping diffuser section. The tips fit in well with other spaceship themes seen in and outside the car, such as LED daytime running lights at the front, vents just behind the front wheels, and various fins and cutaways on the corners of the rear bumper bar.

Being based on the VE Commodore, safety is securely in check. It comes with six airbags, traction and stability control, as well as the more modern technologies such as blind-spot warning, light sensitive auto headlights, cruise control with brake function, and parking sensors. You needn’t worry too much about safety in other words. It’s all backed by a full five star ANCAP safety rating as well.

2012 HSV SENATOR SIGNATURE – ON THE ROAD

Turn the key and the engine physically rumbles into life with a manly huff that then settles to a restless V8 bellow; sitting in the VE Senator Signature is like sitting in a modern-day office suite during a mild earthquake.

Nail the throttle and it’s like waking up to the sound of a jackhammer. The LS3 yells loud from the exhaust, producing an awesome and distinctively-Chev V8 roar.

All this commotion comes courtesy of an active bi-modal exhaust system from the factory. It can be opened and closed via the on-board EDI interface in the dash. 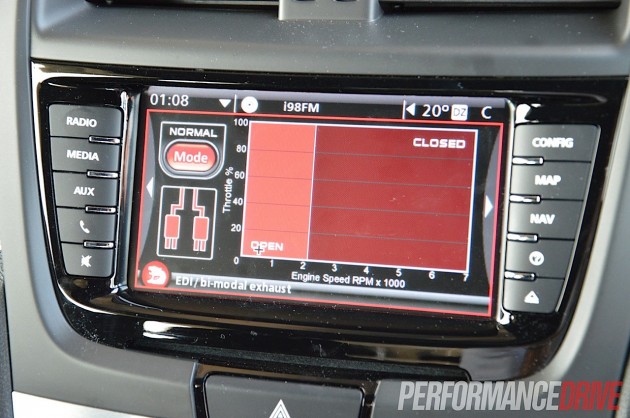 With it set to closed – why anyone would want to do that is beyond us – the V8 is toned down and doesn’t have a higher pitch bark. Instead, it gives off more of a smooth baritone note. It’s a handy tool to have for when you’re coming home during those late nights we guess.

The only aspect of aural pleasure that is perhaps not present is the sound of the engine. There’s no real throaty induction noise as there’s certainly no clever cams or intake manifold involved. It’s all pure muffler and exhaust. 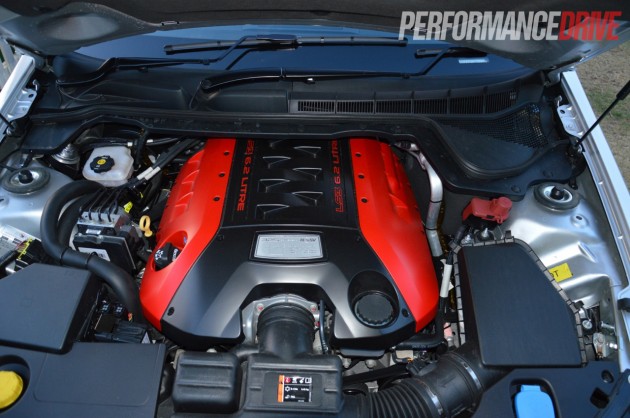 The LS3 comes from a brutal V8 muscle car in the US, the Corvette. Need we say more? It’s powerful and provides a wall of torque during mid-range. It doesn’t rev out all that quickly, compared with a modern and sophisticated V8 engine, but you needn’t rev the guts out of it to get where you want to go in the first place (not that it stops you from doing so anyway). No matter what gear you’re in, the 550Nm on offer will pull you through.

We found little to zero difference driving in LPG and petrol modes. The LPG mode might rev a touch slower, but the difference is so minute, it might even be a figment of our imagination. You really need dyno graphs for a clear indication of the difference. In terms of feel and seat-of-the-pants performance, the days of LPG sapping power from engines are certainly over, put it that way.

We timed 0-100km/h in 5.7 seconds. We tried back to back runs in LPG and petrol modes and found no measurable difference (see video above). It is an impressive time for a 1944kg sedan, but it’s not quite quick enough to keep up with others in this vehicle segment, including the Aussie rival, the 335kW FPV GT-E, and the Chrysler 300 SRT8. 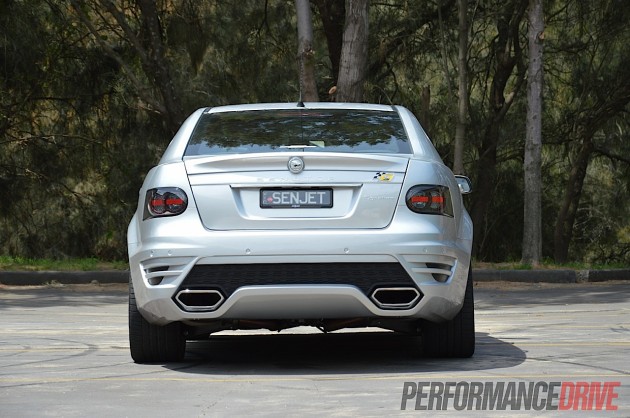 In either mode on initial take off there is a nanosecond delay between when the throttle butterfly opens, and when power is actually sent through the six-speed auto and into the rear wheels. It doesn’t really spin the rear treads if you floor the accelerator from standstill with the traction control off. Instead, power is progressively put through to the ground.

This lag is partly down to the relatively old and unsophisticated six-speed auto transmission. It does tend to clunk and delay during parking and it doesn’t change gear all that swiftly. In fact, it reminds us of the old VN-VS 5.0-litre V8 Commodores of yesteryear, back when the engines were made in Australia. You can almost count the amount of time it takes to slur up or down gears. It does provide blipping on the downshifts in sport mode, however, a $90,000 car should really come with more technology in this department. It may even help to reduce fuel economy.

Speaking of which, we averaged around 18L/100km. The official combined average is 18.4L/100km. If you’re thinking of buying this due to its economy, there’s a few factors to take into account. The LPI system doesn’t seem to improve efficiency, directly, or in the short term, but it does allow you travel further between stops. It also allows you to take advantage of the cheap LPG prices. 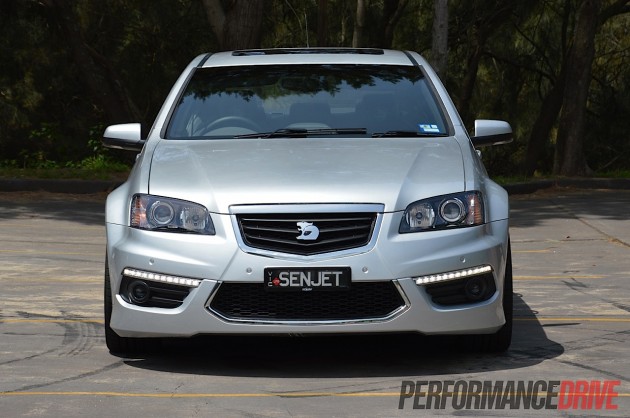 Out on the road the handling is definitely the Senator’s key attribute. It steers and tracks really securely around bends, offering loads of front-end grip and composure. Even under heavy braking the car bites in and hooks around with serious stability.

There is no anti-dive arrangement at the front, which means the front end does pounce when you back off the power, and when you hit the anchors. This doesn’t seem to affect overall compliance, or handling for that matter, but it does mean your short black will spill. 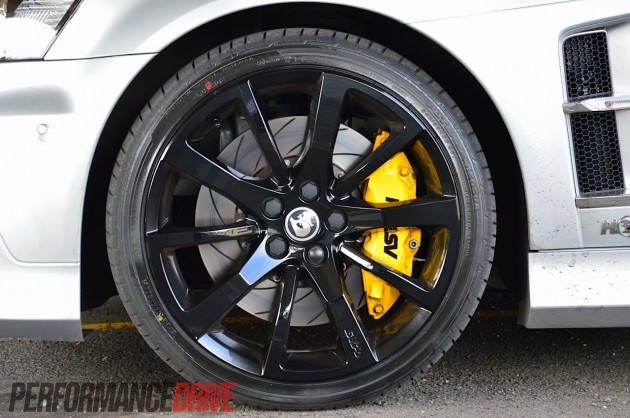 In terms of stoppers, you can option up to a six-piston brake package for $3790, fitted to this test car. We found the brakes to work very well to wipe off higher speeds, with good pedal feel throughout the range of movement and plenty of initial bite.

During our test drive through our usual route they did overheat slightly with some dropping of the pedal. A warning on the dash was also displayed briefly. After we let them cool for a minute or so, there was no further issues. 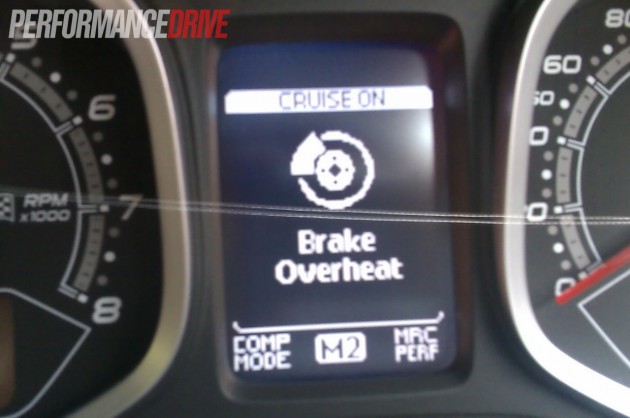 In a market where fuel economy is a high priority, the Senator LPI is a great car for those who want serious V8 performance which isn’t accompanied by constant visits to the watering hole. Match that with a luxurious interior and a sleek, suave and imposing exterior, and you have yourself a superb company car or even a very cool family car. 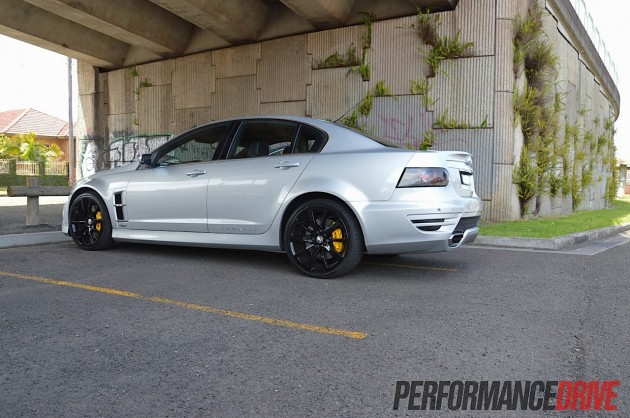 FPV GT E – 5.0-litre supercharged V8, 335kW/570Nm – 1852kg – $82,490
The luxury version of the mighty GT. Same supercharged V8 brutality under the bonnet, smoother and sleeker styling on the outside. Only available with an auto transmission. Cheaper than the Senator Signature.

Chrysler 300 SRT8 – 6.4-litre naturally aspirated V8, 347kW/631Nm – 2012kg – $66,000
The gangster machine from Detroit, made in Canada. Significantly cheaper than the Aussie rivals and quite a lot more powerful. Excellent straight-line performance, not as good in the handling department. Decent cylinder-deactivation technology.